Elton John says there's a deeper meaning behind the biopic drama, "Rocketman," which tells the story of his young life until he found sobriety.

The "Rocketman" himself and actor Taron Egerton joined "Good Morning America" live from Cannes, France, where the world premiere of the film is happening tonight at the film festival.

John, who served as executive producer on the project, said its about a person who is "deeply troubled" with both their success and personal life.

"The story is about redemption, asking for help, realizing your behavior is so asinine and so stupid and so horrible that you have become ashamed of yourself," John told "GMA." "The thing is, I didn't want to live the rest of my life like that and I wanted to become a good person -- the person that I never knew. I had to go back in time and do a lot of work on myself. And it's all been worth it. It's an amazing journey."

John went on, sharing the true message behind the movie.

"The message is to people if you're in a bad way and you're unhappy, ask someone for help," he said. "It really is so difficult sometimes to do that but when I did, a lot of help came my way and my life since I got sober, which is a long time ago, has been quite the most amazing journey."

(MORE: Elton John says 'it's the weirdest thing' to see himself portrayed onscreen)

"If you're in a bad way and you're unhappy ask for help." @eltonofficial opens up about the message and what he hopes people take away from the film #Rocketman. pic.twitter.com/dFm2GQOuEJ

John, a dad of two, has been sober for decades and has publicly celebrated it on Instagram. 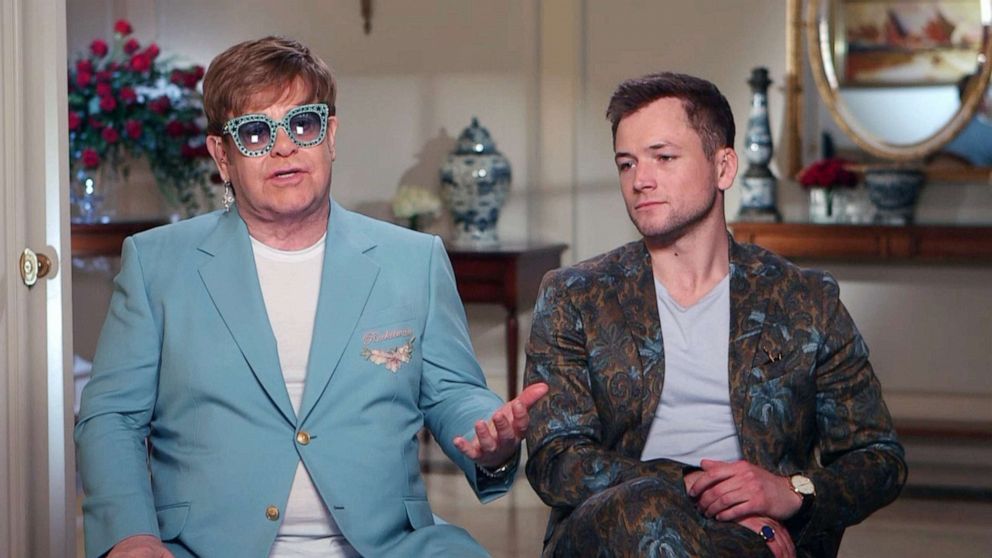 Egerton, who plays John in the film, said coincidentally he had sang a popular Elton John song to get into drama school.

"I sang "Your Song" to get into RADA and then obviously I sand 'I'm Still Standing' in "Sing," Egerton said, referring to London's Royal Academy of Dramatic Art.

"Elton is in "Kingsman 2" and now here I am portraying him in a movie about his life."

Egerton also performs all the songs himself in "Rocketman."

"When he was suggested for the role I thought, 'Well he can sing.' When he started the process of recording...I was even more impressed."

Elton even co-wrote a duet, "(I’m Gonna) Love Me Again," which he and Egerton sing together on the film's soundtrack.

"It sounds like an old, end of 60s, early 70s song and he sings it brilliantly," Elton said. "I'm glad we've got something on record together."

"Rocketman" hits theaters on May 31.