"Jeopardy!" contestant Christine Whelchel has been competing on the popular TV game show since last week but it wasn't just her winning performances that have been capturing viewers' attention.

ABC News
Christine Whelchel is pictured on her third day as a contestant on the game show "Jeopardy!" on ABC, on Jan. 31, 2022.

The piano teacher and church organist from Spring Hill, Tennessee, appeared without a light brown wig during Monday's episode and explained why she wanted to do so during a Q-and-A with host Ken Jennings.

"After the winnings, I decided that I didn't need to hide behind a wig anymore and I wanted to normalize what cancer recovery looks like," Whelchel said. 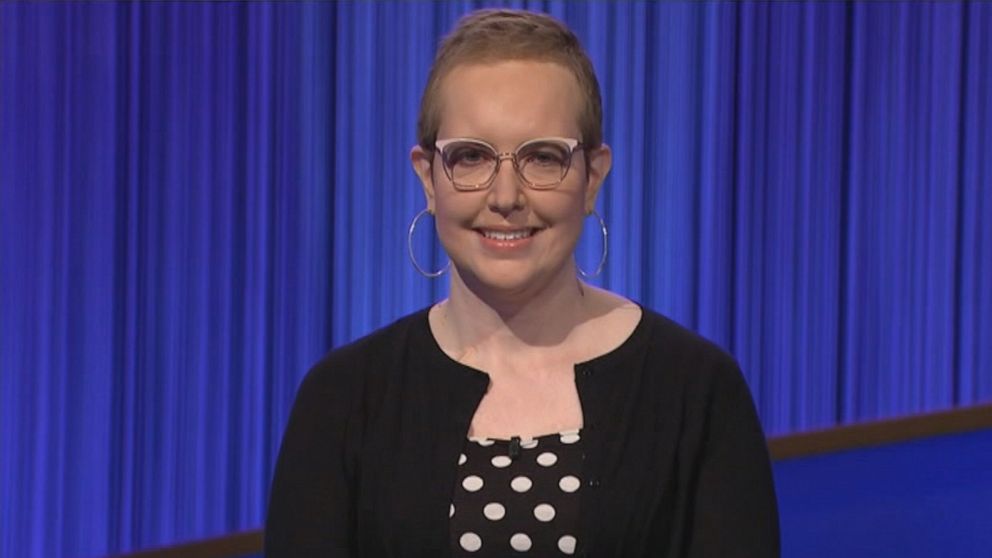 ABC News
Christine Whelchel is a contestant on the game show "Jeopardy!" on Feb. 28, 2022.

The game show shared a video clip of Whelchel discussing her decision on Twitter and in a caption added, "A strong Jeopardy! player and an even stronger person. ❤️"

The tweet has already garnered over 90,000 views and more than 5,000 likes, with many commenting and sharing their own cancer recovery photos.

A strong Jeopardy! player and an even stronger person. ❤️ pic.twitter.com/NQqJS2uAs1

"Go go go, Christine! 🙌🏼 This was me with my husband, 3 months after my last chemo session," wrote one commenter.

Another shared a smiling selfie and commented, "Go Christine! from a fellow warrior."

Whelchel explained in an earlier Q-and-A last week that she had been diagnosed with breast cancer a year ago. Shortly after learning about her diagnosis, she said she decided to try her luck and take the "Jeopardy!" test, the first step in getting on to the game show. Whelchel also said she is currently cancer-free.

According to the Centers for Disease Control and Prevention, hair loss or alopecia is a common side effect of some cancer treatments like chemotherapy. After Whelchel was featured as the Play of the Day on "Good Morning America" Tuesday, co-anchor Robin Roberts mentioned that cancer patients who wear wigs don't always do so for themselves.

"Sometimes we wear the wig to put others at ease," she pointed out.

"[Whelchel] showed a lot of strength, a lot of courage. And I'm telling you, people were watching. It makes such a big, big difference," Roberts, a cancer survivor herself, added.