Happiness can go hand-in-hand with success and a new Super Bowl ad tapped some of the world's most accomplished athletes, including Peyton Manning and Serena Williams, to show how they have fun off the playing field.

Michelob Ultra's newest ad campaign poses the question: "Are you happy because you win, or do you win because you're happy?"

Is Peyton happy because he wins, or does he win because he’s happy? pic.twitter.com/G1oqqQLcA2

"When I look back on my football career, I felt our teams won a lot of games and I played my best games when I was happy. I had a lot of joy during my football career," Manning told "Good Morning America" on Monday. "There's the old saying, enjoy the journey not the destination. And when I think back on my memories during my 18 years of playing, I think about those plane rides with my teammates, I think about hanging around the locker room, laughing with each other, I think about taking the offensive linemen out to eat on Thursday nights, keeping them well-fed, maybe having a couple of cold beverages and that was well worth it." 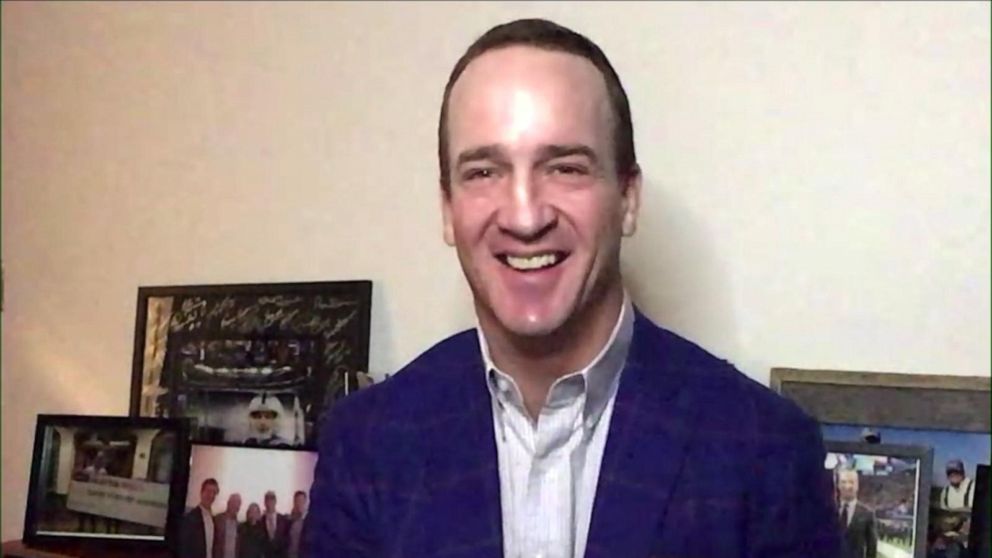 He continued, "Those are some of my greatest takeaways. Those happy moments that I felt brought our team together and helped us win more games on Sunday and help us win a championship. And then of course you'll have the happiness after, but I think you can certainly do both."

Manning, who retired in 2016 after leading his Denver Broncos to a Super Bowl title, said "I have no regrets. I left it all out there on the field. But I do miss my teammates."

Now one of his longtime competitors and close friends, Tom Brady, is headed to Super Bowl LV with Tampa Bay in his first year with the Buccaneers to face defending champion Patrick Mahomes and the Kansas City Chiefs.

"Everyone stepped up to a challenge."

"Tom has just been the ultimate professional -- I give him all the credit. He's put in the time, sacrificed, he's formed a bond with his new teammates in a short period of time, in a pandemic offseason, so he's earned the right to have his team in a Super Bowl in his hometown," Manning said. 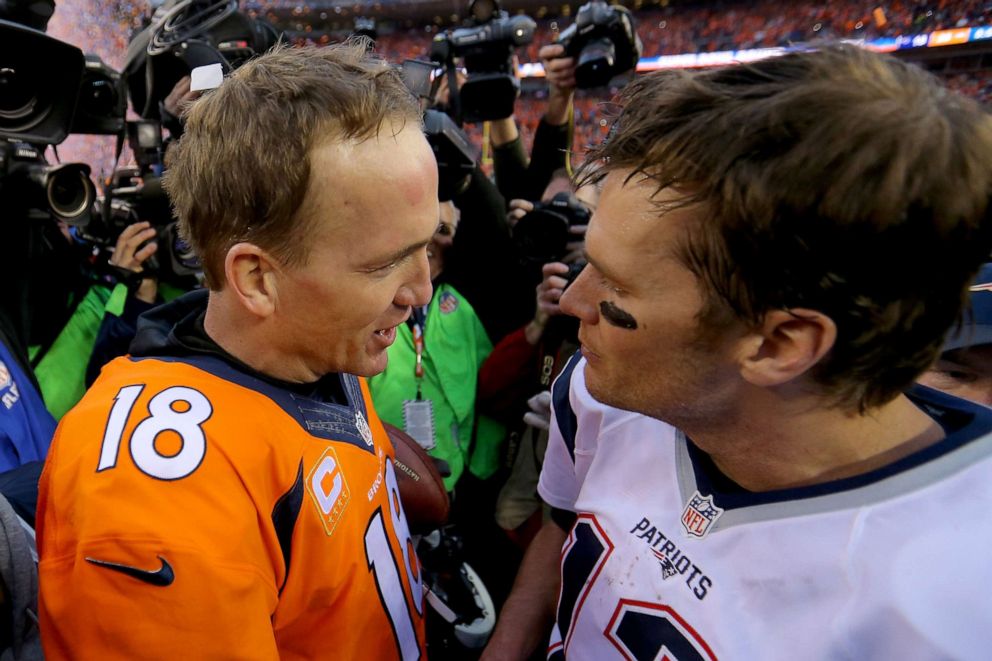 He explained that this matchup will make for "a great Super Bowl."

"It's kind of the new guard vs. the old school guard -- Mahomes is just exciting to watch -- a guy that plays with a lot of joy and that's a big part of him playing so well. I can tell you those Chiefs are having a lot of fun," Manning said. "But Tom is Tom, he's been doing it for so long and there's nothing he hasn't seen before. So it's going to be a battle of those two quarterbacks."

Are you ready, #ChiefsKingdom? pic.twitter.com/kKDScrKR1J

But even he wouldn't make a definitive prediction of whose team will come out on top.

"Picking against Tom Brady at home I'm not sure anybody can do that, but Patrick Mahomes a chance to win back-to-back Super Bowls. The only guy to do that recently has been Tom Brady, so I have such respect for both of those guys, I can't pick against either one of them," he said with a laugh.

Manning did make a different prediction about Brady's career no matter the outcome in Tampa. 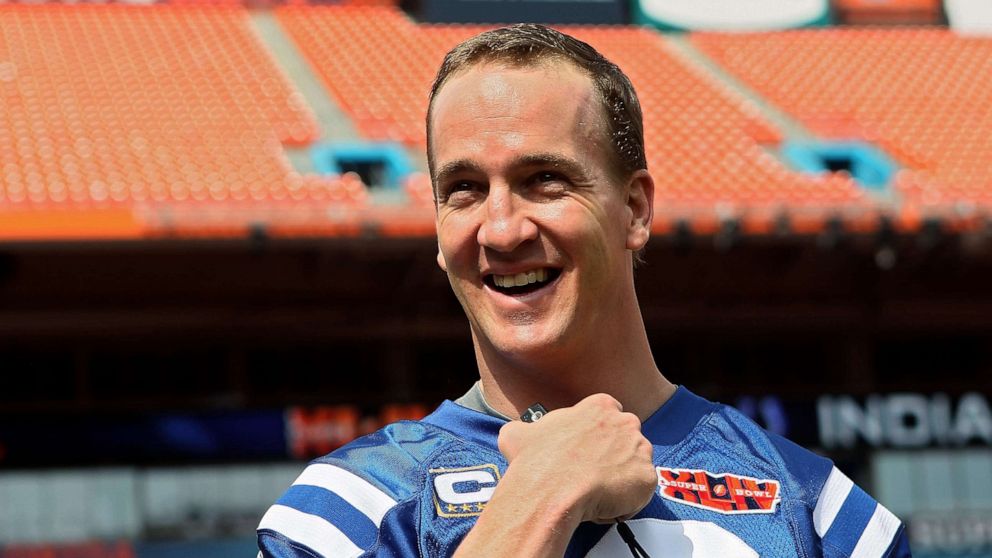 When asked if Brady should retire if he wins, Manning said, "I don't think he will."

"It's such an individual decision, nobody can make that decision for you, I have so much respect for Tom, the battles we had on the field, we formed a friendship off the field as well, always felt he brought out the best in me and vice versa for him," he said. "I don't think he will because it's his first year in Tampa. He's having a lot of fun, he's happy, he's joyous and I can see him doing it for a few more years no matter what happens on Super Bowl Sunday."

Another superstar athlete stressing the importance of happiness, and making an appearance by way of the new Michelob Ultra ad, will be Serena Williams. 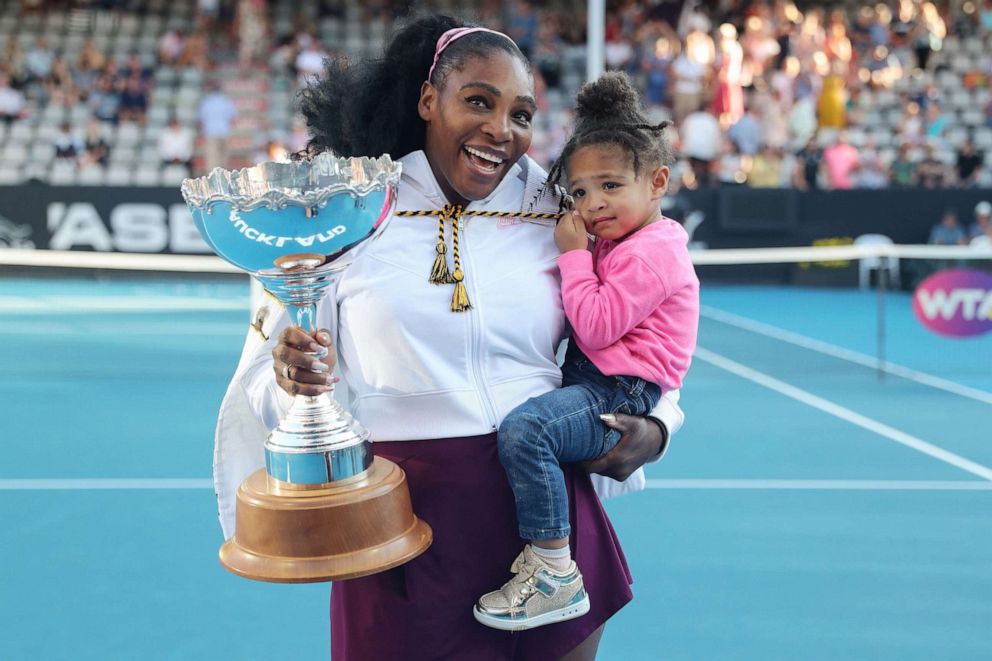 Michael Bradley/AFP via Getty Images
Serena Williams with her daughter Alexis Olympia after her win against Jessica Pegula at the Auckland Classic tennis tournament in Auckland on Jan. 12, 2020.

The 23-time Grand Slam winner, who is currently quarantining with her husband Alexis Ohanian and her daughter Olympia ahead of the Australian Open, told "GMA" that they are "a huge contribution" to her success.

"For me, I win because I'm happy," she said. "I love being around Olympia -- It's so good to have this experience with her, because I've gotten so much time to spend with her that I wouldn't have had otherwise -- so it's been really good to have an opportunity to just be with her 24/7."

She and her 3-year-old have enjoyed time on the tennis court as well as exercising their imaginations.

"We, like, make up things -- l look at something and say, 'oh, that's a giraffe,' or that we'll go to the fake zoo. And my imagination has been pushed to its limits," Williams said. "And so it's kind of cool because I feel like I can be a kid again and have imagination."