Prince William, Kate and their children, took part in the United Kingdom’s weekly “Clap For Our Carers” event Thursday, as part of “The Big Night In” a special BBC program raising money for the fight against COVID-19.

The Duke and Duchess of Cambridge, Prince George and Princess Charlotte were filmed during the BBC’s telethon event applauding first responders and health care workers across the U.K. who are on the front lines of the coronavirus pandemic.

Prince William kicked off the event by taking part in a short comedy sketch with actor Stephen Fry, who reprised his iconic role as Lord Melchett from the British sitcom “Blackadder Back & Forth,” on a Zoom conference call.

The two talked about how they’re self-isolating and Prince William, in a relatable comment, opens up about how homeschooling is a “bit of a nightmare.”

Then after Fry announces a 60-second warning until “Clap For Our Carers,” William asks him for any TV recommendations, in which he replies, “I heard ‘Tiger King’ is quite good.”

“I tend to avoid shows about royalty,” William said.

When Fry warns him of the 45-second mark until the event, William -- without breaking character in the sketch -- channels every person who has used Zoom during quarantine to communicate with others and said, “On my way, let me just see if I can find my socks and my shoes … and my trousers.”

The sketch ended with the entire Cambridge family wearing NHS blue and cheering on first responders and included clips of health care workers, military and more taking part in the traditional weekly event too. The video ended with Prince Charles and Camilla applauding as well from their doorstep. 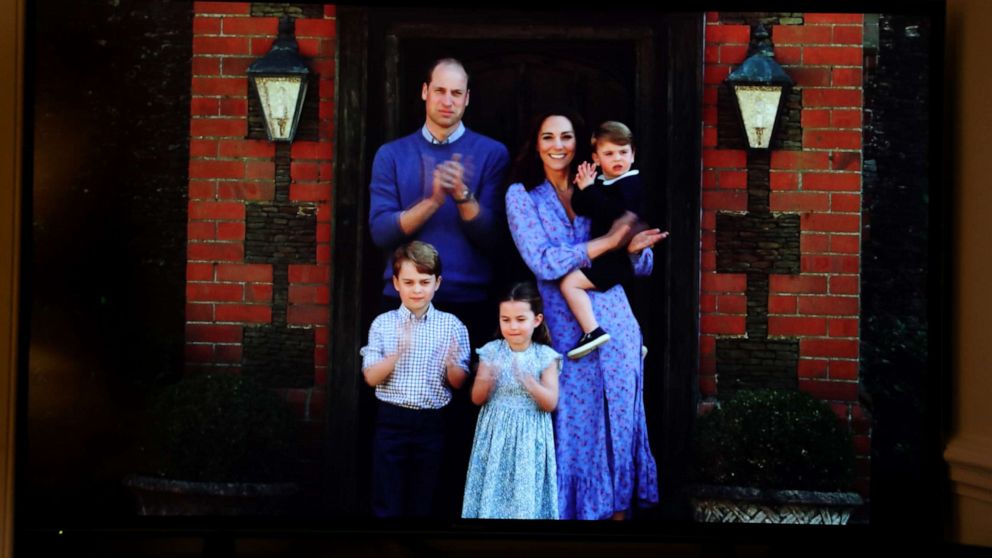 Last month, Kensington Palace shared a video of Prince William and Duchess Kate’s three children clapping for first responders in the medical field and have been encouraged to participate each week.

In the U.K., there are nearly 140,000 confirmed coronavirus cases and at least 18,000 people have died from the disease, according to the U.K. Department of Health and Social Care and Public Health England.

The British Government promised to double the total of whatever funds were raised during the BBC’s three-hour event.

Almost $33 million was raised by the network.