For the second year in a row, Queen Elizabeth's official birthday celebrations were drastically scaled back and relocated from the capital, London, to Windsor Castle, where the queen is currently in residence.

The normally grand military event marking the monarch’s official birthday is known as “Trooping the Color," and usually sees more than a thousand soldiers, hundreds of horses and hundreds more musicians take part in a meticulously orchestrated parade through London and ending outside Buckingham Palace. 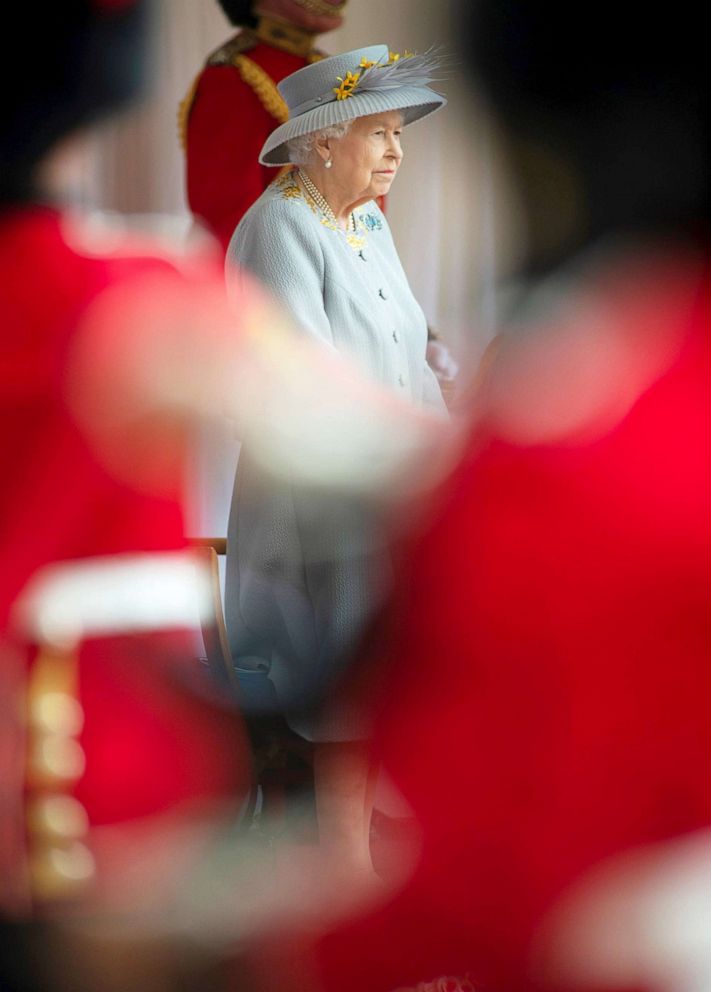 Eddie Mulholland/Pool via Reuters
Queen Elizabeth attends a ceremony marking her official birthday in the Quadrangle of Windsor Castle in Windsor, Britain, June 12, 2021.

The event has a more than 260-year history celebrating the birthday of the sovereign, but since the COVID-19 pandemic was declared in March 2020, the fanfare and pageantry has been hugely trimmed-down, involving a much smaller group of parading soldiers on display within Windsor Castle’s ancient quadrangle, lasting just 20 minutes. The birthday parade was also entirely closed to the public, but televised.

The senior military officer responsible for planning the remodeled event, Lieutenant Colonel Guy Stone, said his aim was to create a “memorable and uplifting day” for the queen. He and his team have been working for months to stage the scaled-back parade at Windsor – slightly larger in scope than the “mini-Trooping” last year at the height of the first wave of the pandemic. 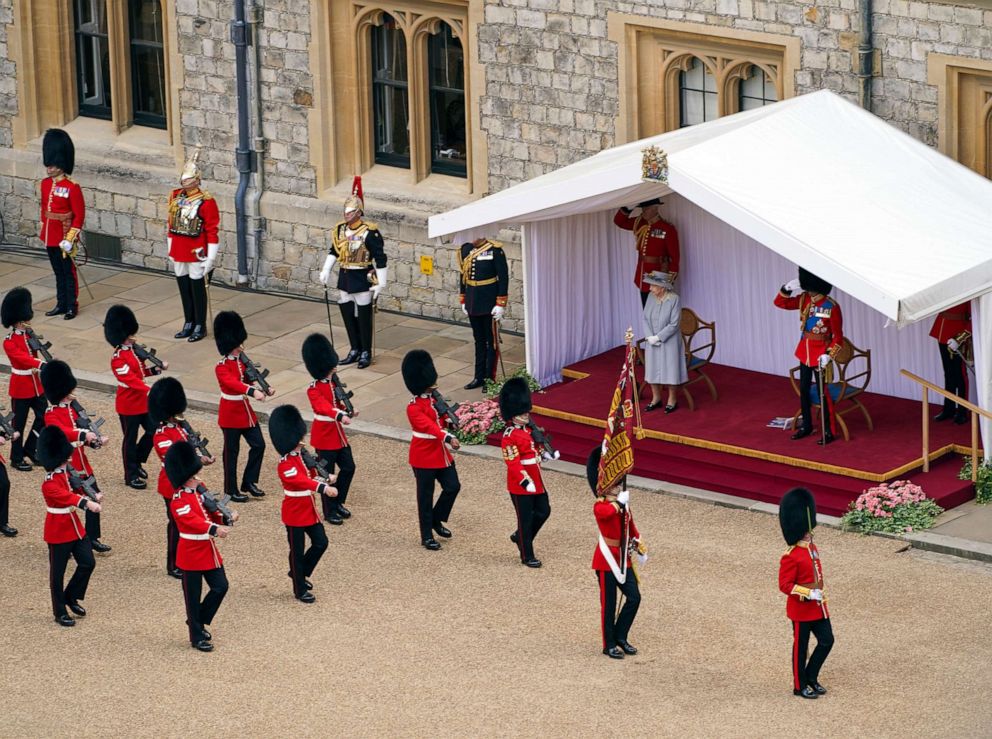 This year’s parade takes place two days after what would have been the 100th birthday of the queen’s husband Prince Philip, who died in April. It is the queen’s first Trooping without him.

Instead she was accompanied by her cousin, Prince Edward the Duke of Kent. Queen Elizabeth, freshly back in Windsor after traveling to Cornwall for the start of the Group of Seven summit, was greeted with a rendition of the national anthem, before inspecting her troops from the Household Cavalry and the Scots Guards. F Company Scots Guards Trooped the Color of the 2nd Battalion Scots Guards through the ranks of guardsmen on parade. 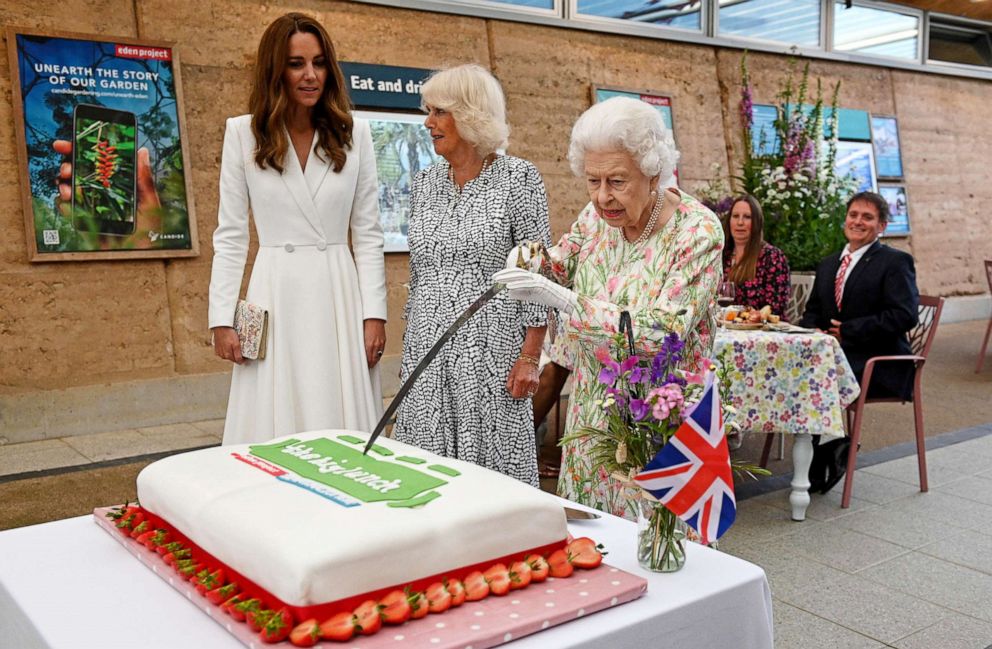 Oli Scarff/Pool/AFP via Getty Images
Queen Elizabeth II attempts to cut a cake with a sword, lent to her by The Lord-Lieutenant of Cornwall, Edward Bolitho, to celebrate of The Big Lunch initiative at The Eden Project, near St Austell in southwest England, June 11, 2021.
MORE: Biden's first foreign trip as president

The guardsmen taking part have been working through the pandemic supporting local communities and the U.K.’s National Health Service, or have been serving overseas on military operations.

Lt Col Stone revealed the pandemic had proved a major challenge because of the mandatory self-isolation periods, and the lack of daily practice of ceremonial duties – which have been scrapped to avoid crowds gathering in central London. 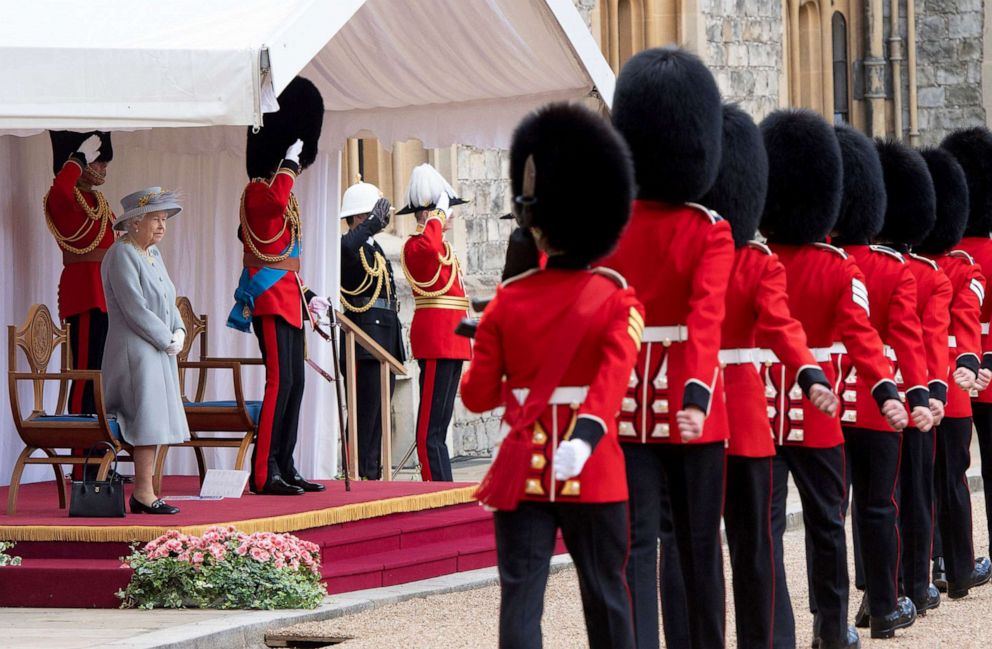 “…From a skillset perspective it's been very difficult to achieve what I hope will be a good standard because we're not doing the Changing of the Guard ceremony every day due to the pandemic -- that applies to horses, the musicians and the Guardsmen with their foot drill and rifle drill," Stone said.

The short event was then marked with a 41-gun royal salute from Windsor’s East Lawn, and a spectacular Royal Air Force flyover soaring across Windsor Castle.

The Queen's Birthday Parade 2021 closed with a magnificent fly-past by the @rafredarrows and a 41 Gun Royal Salute by The King's Troop Royal Horse Artillery 🇬🇧 #WindsorCastle pic.twitter.com/63xGuK9FRy

The queen seemed in great spirits Saturday, having created a stir on social media for her quips at the G-7 summit. While waiting for the camera, posing with world leaders on the Cornish Coast, she was heard off-mic saying, "Are you supposed to look like you're enjoying yourself?" to chuckles from all sides. 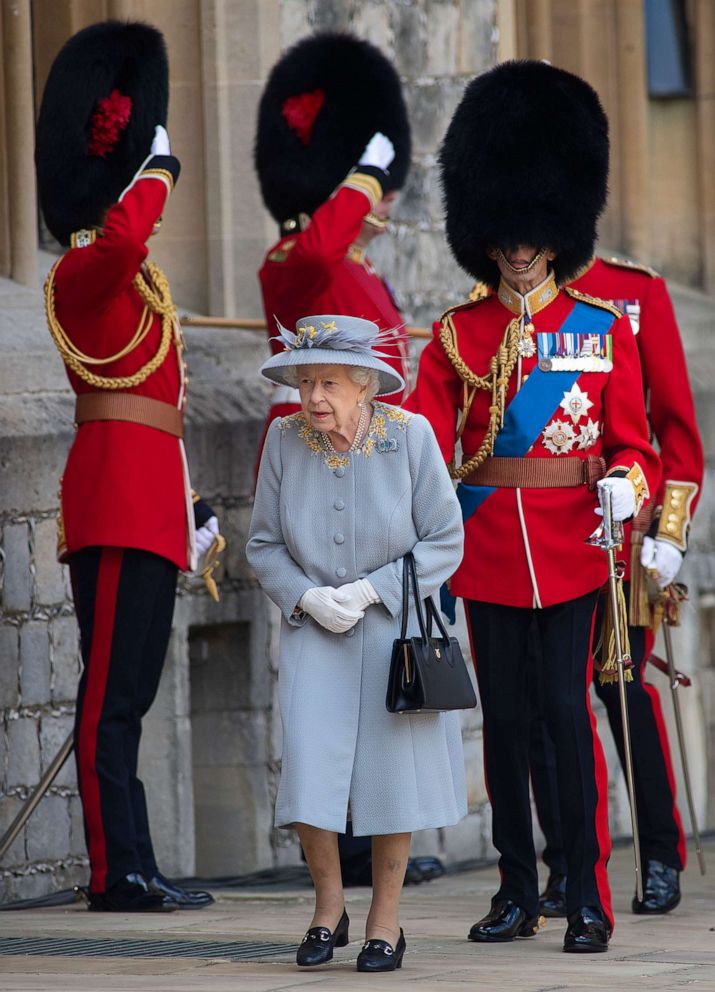 Whilst visiting the Eden Project in Cornwall, the queen again stole the show insisting on using a ceremonial sword to cut a cake in celebration of The Big Lunch initiative.

Upon being informed there was a traditional knife available for cutting as she was visibly struggling with the long (but perhaps rather blunt) ceremonial sword, she quipped: "I know there is, this is more unusual," before being helped by Camilla, Duchess of Cornwall.

Her Majesty wielding a sharp sword, and an even sharper tongue 🤣 pic.twitter.com/PulzMpj86Y

The 95-year-old monarch's birthday, which is actually on April 21, is officially celebrated each year on the second Saturday of June. 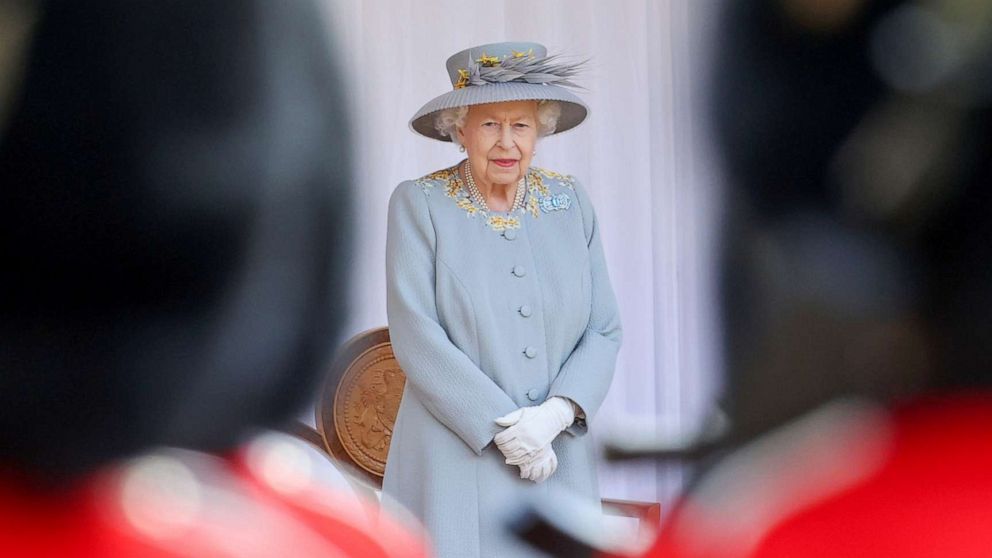 The celebration is typically an event that brings together all members of the royal family taking part in the procession and in carriages, and ends up on the front balcony of Buckingham Palace for an iconic group shot to observe the traditional flyover by fighter jets from the Royal Air Force. 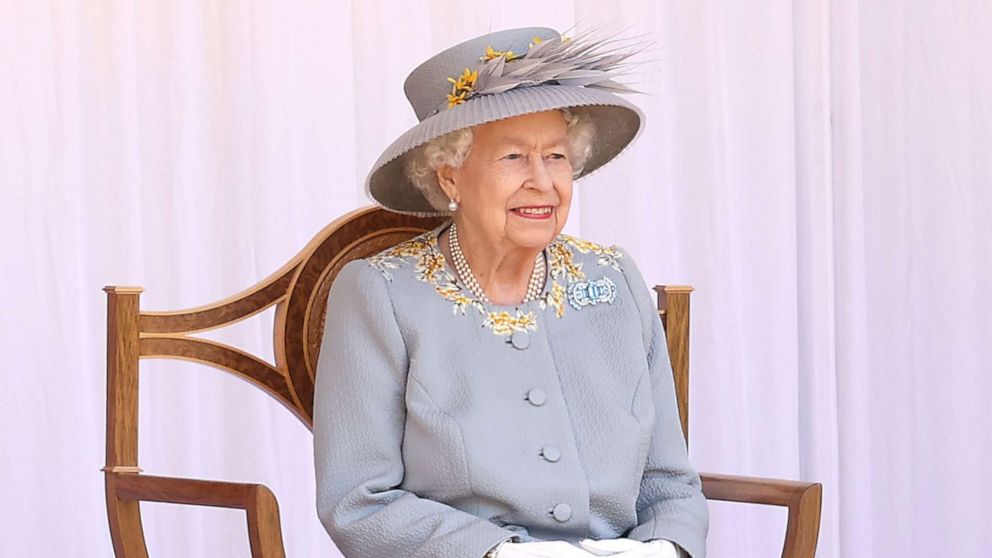 The last time the family was seen together on that balcony was in 2019, just a few weeks after Prince Harry and Meghan Markle had welcomed their firstborn baby Archie. Harry and Meghan now live stateside in the U.S in Caliornia; their young family now grown to four members, with the arrival of baby Lilibet last week.

The queen has attended a Trooping the Color every year of her reign, apart from in 1955 when the event was canceled due to a national rail strike.