An 18-year-old lifeguard sprang into action to help deliver a baby for a couple visiting a YMCA pool in Longmont, Colorado, last week.

Natalie Lucas, who's been a lifeguard for the past three years, said it was the first time she'd had to help bring life into the world, rather than just prevent death.

"A lot of people are telling me like, 'Oh, I wouldn't have been able to do that, like I would have passed out or freaked out.' I'm like, no, I just did what I was supposed to do," Lucas told "Good Morning America."

The Longmont native was at her pool post on the morning of July 24 when she noticed Tessa Rider and her husband Matthew Jones walk in. Rider then got into the pool, she said. 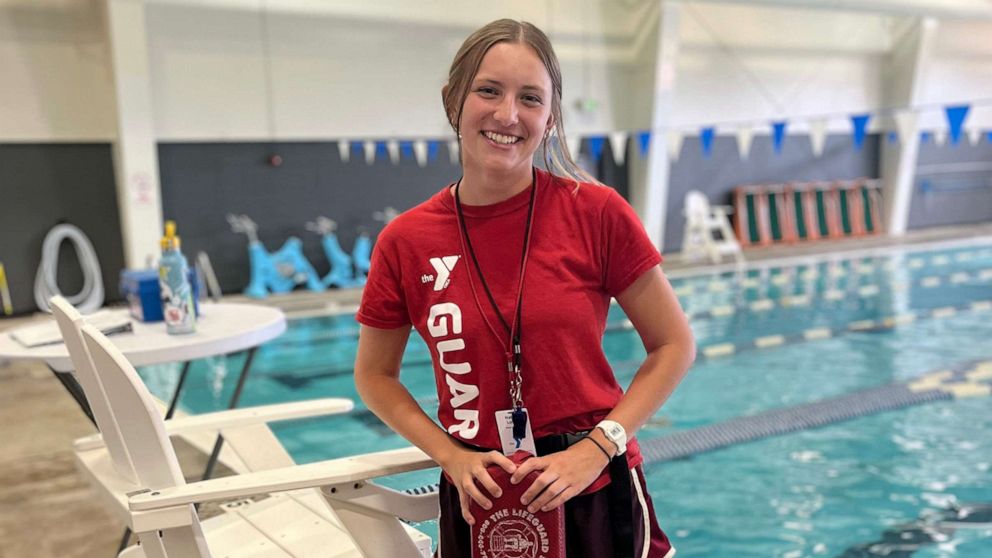 At the time, Rider was about nine months pregnant and past her due date, according to her husband. He told "GMA" the baby had been pressing against a nerve by his wife's hip and being in the water seemed to alleviate some of the discomfort she was feeling.

"There were probably three times that week where we thought, 'We're having the baby finally.' And then nothing happened," Jones recalled. "We just didn't know if it was gonna be that day or that week and there just wasn't a lot of certainty. But the only thing that we could really do is try and make her as comfortable as possible, hence all the trips to the pool."

Lucas kept an eye out while Rider was in the pool and quickly noticed a few minutes later that she seemed to need assistance.

"She had a [pool] noodle to try to relieve some tension from all that weight on the front of her, I'm assuming, and then she started crawling out of the pool ... and I was like, alright, I need to go check to make sure everything's OK there," Lucas said.

But everything was not OK, and to everyone's surprise, a more urgent situation quickly unfolded, with Rider's water breaking while she was on the pool deck.

"I walk over and Matthew, the husband, he says to me, 'We're having the baby right now.' I'm like, 'OK!' Adrenaline kicks in right then and there," Lucas said.

Jones told "GMA" he quickly called 911 but while he was on the phone with the operator, his wife was pulling her swimsuit off and that was when he noticed the baby was crowning.

Lucas, meanwhile, said she was "freaking out a little bit" and feeling nervous but made sure to keep herself composed throughout the event.

"I knew I needed to stay calm and level-headed," the 18-year-old said. "The couple was very calm about it all while it was all happening, which kind of surprised me. So I made sure to keep my head on and stay with them, keep asking them questions, keep them focused on the baby and [make sure] that they [were] the most comfortable."

Lucas helped Rider and Jones by bringing over the center's medical supplies and towels, and calling for more assistance from the front desk.

"I make sure Tessa is ... comfortable and trying to get her situated in the best position possible," Lucas said, noting that they were only about five feet away from the water. "I'm like alright, this cement ground isn't that great but let me prop her up, lean her head on the medical bag. I give some towels to Matthew, the baby comes out quite fast, like less than five minutes, I would say. It was pretty insane."

As Rider was giving birth -- Jones caught the baby -- Lucas asked a lap swimmer nearby to call 911. The man would later snap a photo for the family with Lucas, after the baby was born. 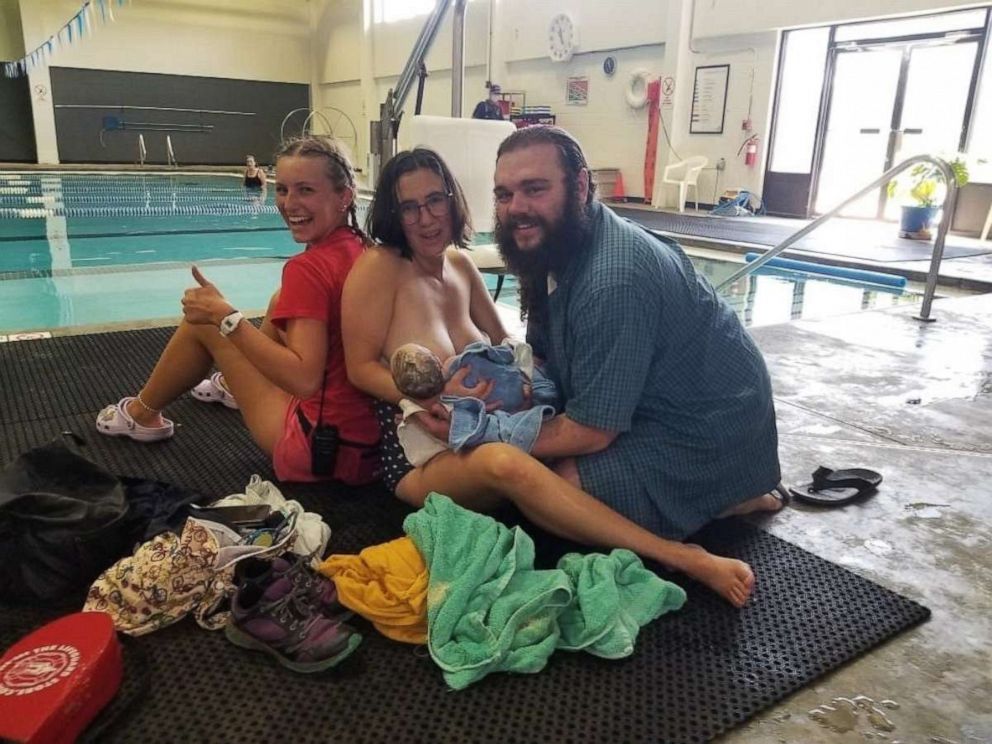 Courtesy YMCA of Northern Colorado
YMCA lifeguard Natalie Lucas and YMCA members Tessa and Matthew Rider after the Riders welcomed their third child on the pool deck, July 24, 2022, at the Y in Longmont, Colo.

"We were on the phone with the operator, making sure that the baby was breathing, that the chest was rising and falling. I had to get a towel to clean up the baby's mouth to make sure the airway wasn't obstructed and that he had a clear [airway for] breathing. And then the paramedics came in about five minutes later after that," Lucas explained.

Luckily, baby Tobin Thomas Rider was born without any complications -- and he now has a lifetime membership to the YMCA. 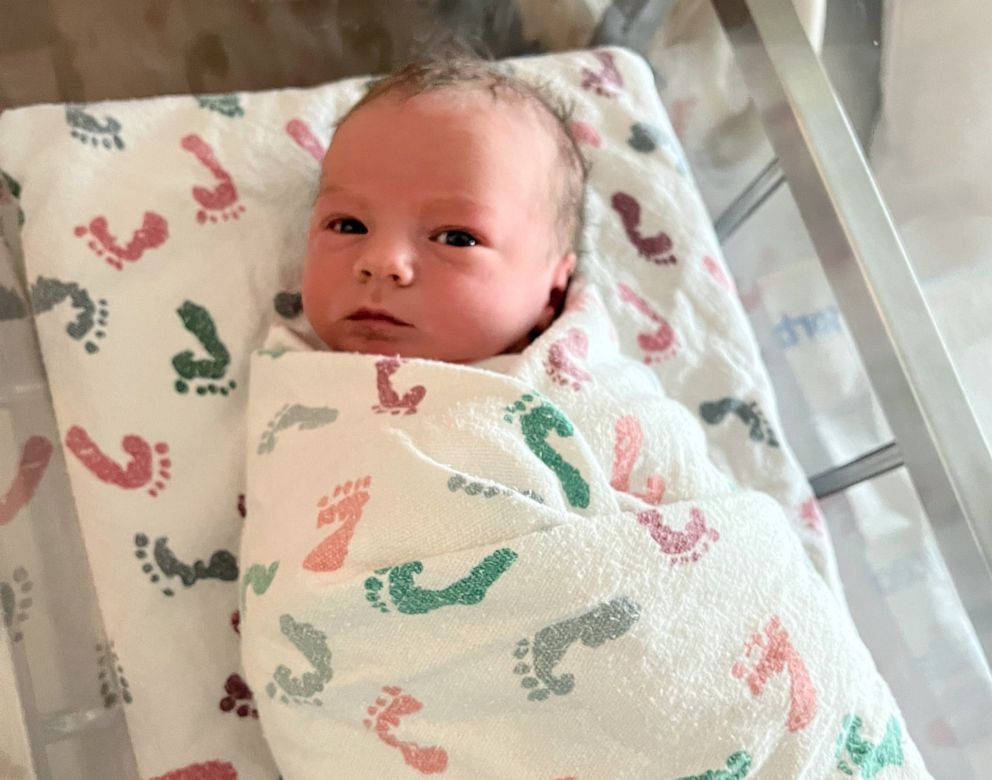 Jones told "GMA" that he was grateful to have Lucas' assistance through his son's birth.

"I liken Natalie's presence to like a doula or a midwife. ... She was super focused on Tessa. So in that moment, I did not have to worry about my wife. I could direct the entirety of my focus onto Tobin and what Tobin needed to be safe and healthy," he said.

"Without Natalie there, I wouldn't have been able to give my attention to Toby. And I would say that that was everything in that moment. Tessa wanted me focused on Toby but she still needed care and that's what Natalie was there for."

Jones said that both mom and baby are doing well following that whirlwind Sunday.

"He's just a cute little guy, really relaxed," Jones said. "The situation he created around his birth was pure chaos. And now that he's in the world, it's quite the opposite of that." 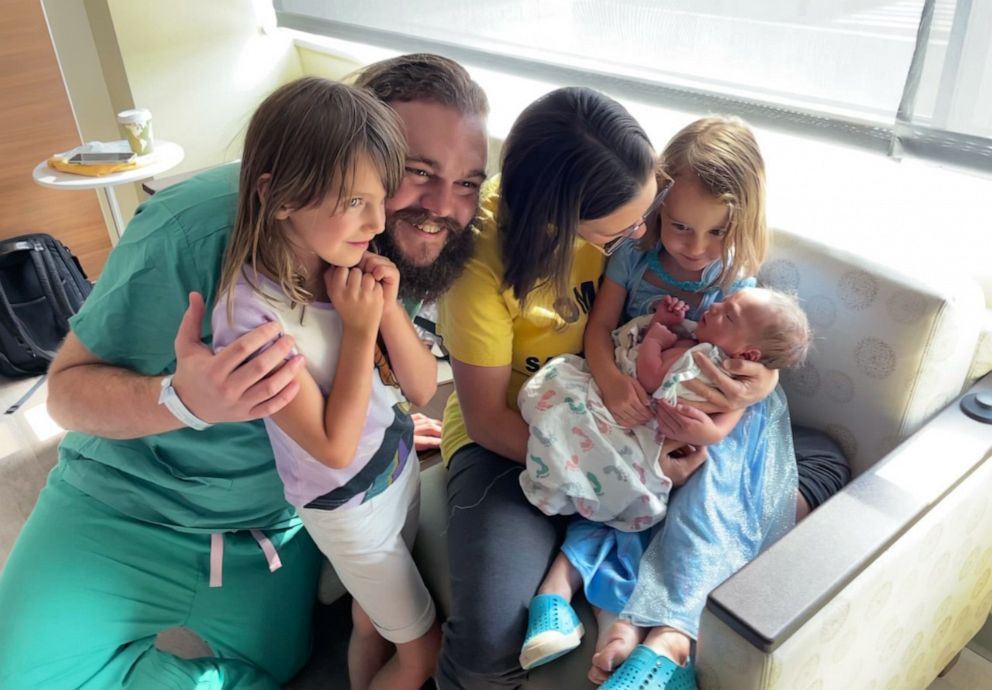 For her part, Lucas said Toby's unexpected birth was all just part of the job -- and made for a memorable day.

"I feel like I just did my job and that I did what I was supposed to do in that situation," she said. "I'm a lifeguard. I was there to help and I was there to be a lifesaver in a sense."

The teen, who's getting ready to head off to San Diego State University for college in the fall, says the whole experience made an impression on her and she plans on sending birthday cards to Tobin and staying connected with the family.

"It's definitely something I will never forget and I will tell the story many years in the future. But this experience has definitely opened my eyes and kind of [made me] realize just how amazing women can be ... like, wow, that anything can really happen and it's pretty cool to experience that with someone and be there with them," Lucas said.

"I'd like to keep in touch because this will be an experience that none of us will ever quite forget," she added.