A video of an Arkansas man giving his grandsons a two-armed hug for the first time has touched the hearts of many and is drawing attention to adaptive equipment that can make a big difference for people with disabilities.

Emily Sisco, an adjunct professor of occupational therapy at Arkansas State University, shared the now-viral video on Facebook on Feb. 2. The clip shows her dad, Kevin Eubanks, tearfully holding his grandsons, Cope, 9, and Rigney, 6. Eubanks’ left arm was injured following a stroke in 2014 but last month, with the help of a soft, stretchy wristband tool, he was able to link his arms into a circle shape and lift them together for a warm embrace with the boys.

Eubanks, 60, said the special moment was “overwhelming” and one he couldn’t have imagined eight years ago. “It caught me off guard and as you can tell, it was very emotional for me because the family I grew up in, we always love to hug each other with both arms and it's what we call giving a bear hug, and that is just something that I hadn't been able to do since my stroke,” Eubanks explained to “Good Morning America.”

He went on, “I got to hug my second one, Rigney, which was born after my stroke. The realization really hit me then that this is the first time I've got to hug him like that with two arms. And I just could not control it then. I just cried and cried and cried.” 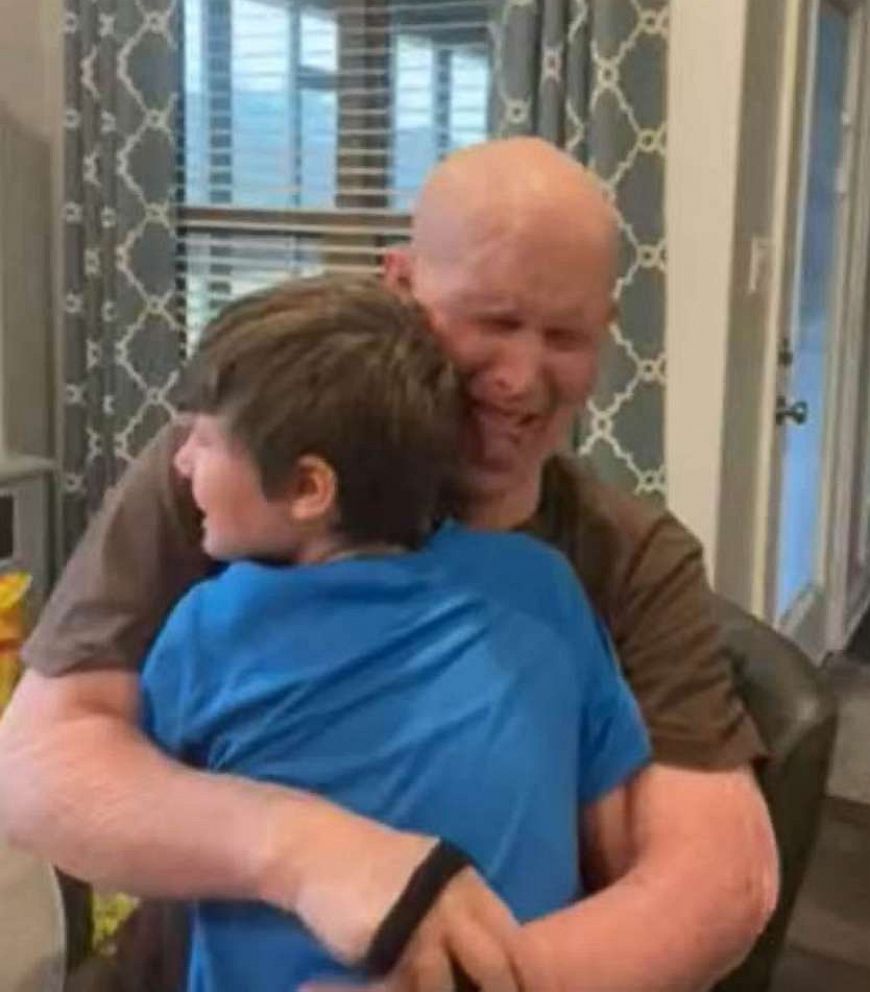 Courtesy of Emily Sisco
Kevin Eubanks was able to give his grandson Cope a two-armed hug for the first time on Feb. 2, 2022.

It’s a significant breakthrough for Eubanks, who, at 52, suffered a stroke that temporarily rendered the left side of his body paralyzed. He said doctors told his family at the time that he might not even live. But in the years since, Eubanks has worked hard to make a strong recovery. Watching the therapists who helped her dad even inspired Sisco to pursue occupational therapy as well.

“She saw how much work they were doing with me in the facility that I was in and it just touched her heart to where she wanted to be able to help people,” Eubanks said. “And that's when she went back to school and got her degree.”

Sisco’s Facebook post has nearly 5 million views in just over five weeks. It has also shined a spotlight on the wristband tool Eubanks used.

Initially named the “Hugger” and now called the “HugAgain,” the tool is a prototype created by Arkansas State University students Erica Dexter, Larissa Garcia, Lisa James and Casey Parsons, all students of Sisco’s in the occupational therapy assistant program. The "HugAgain" is one of several adaptive tools, including an adaptive fishing pole, card holders and a soap holder tool -- all made by Sisco's students. 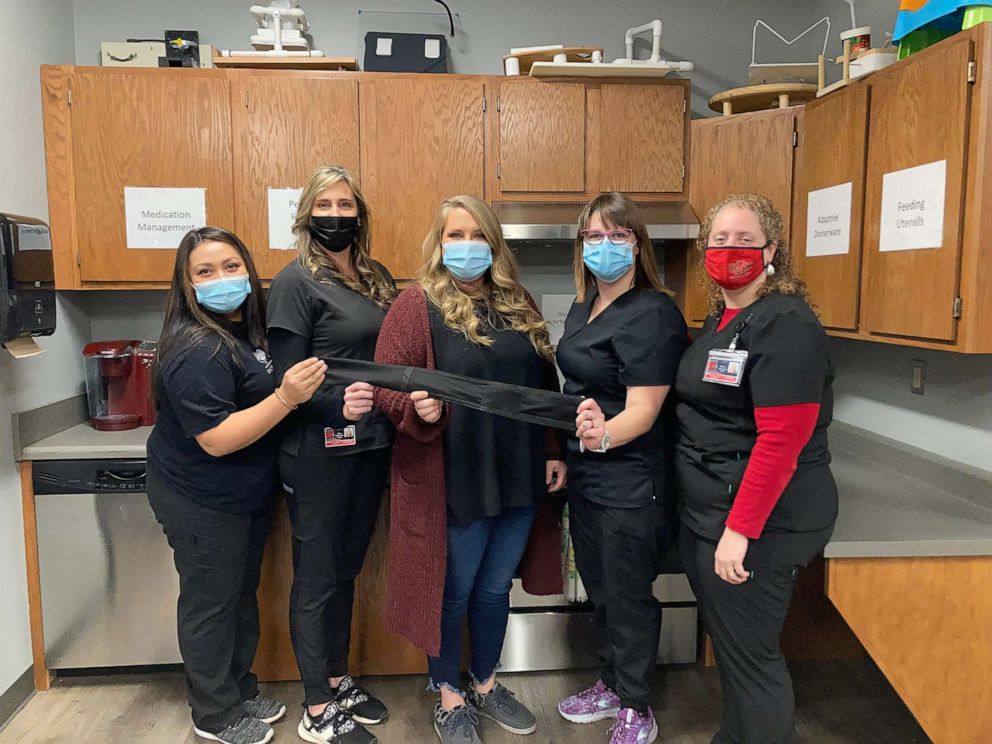 Courtesy of Emily Sisco
Emily Sisco with her students who created the HugAgain adaptive tool.

In January, Sisco gave her technical skills class a case study and two weeks to create a tool that would benefit the client in the case. In the past, Sisco said she gave students a fake scenario to work with. But this time she decided, with Eubanks’ approval, to present her own father’s real-life story and post-stroke experience for the class assignment.

“When we asked what is one thing that you would like to return doing and he said, hug again with two arms, we just knew that we had to help him get there,” Parsons explained to “GMA.” “We were all in agreement that giving him a hug was occupational-based, it was meaningful to our client, and it was something that we could do or at least try to do.”

The team got to work brainstorming ideas, addressing questions and figuring out technical details like the type of material they wanted to use. The “HugAgain” came together quickly – all within two weeks. 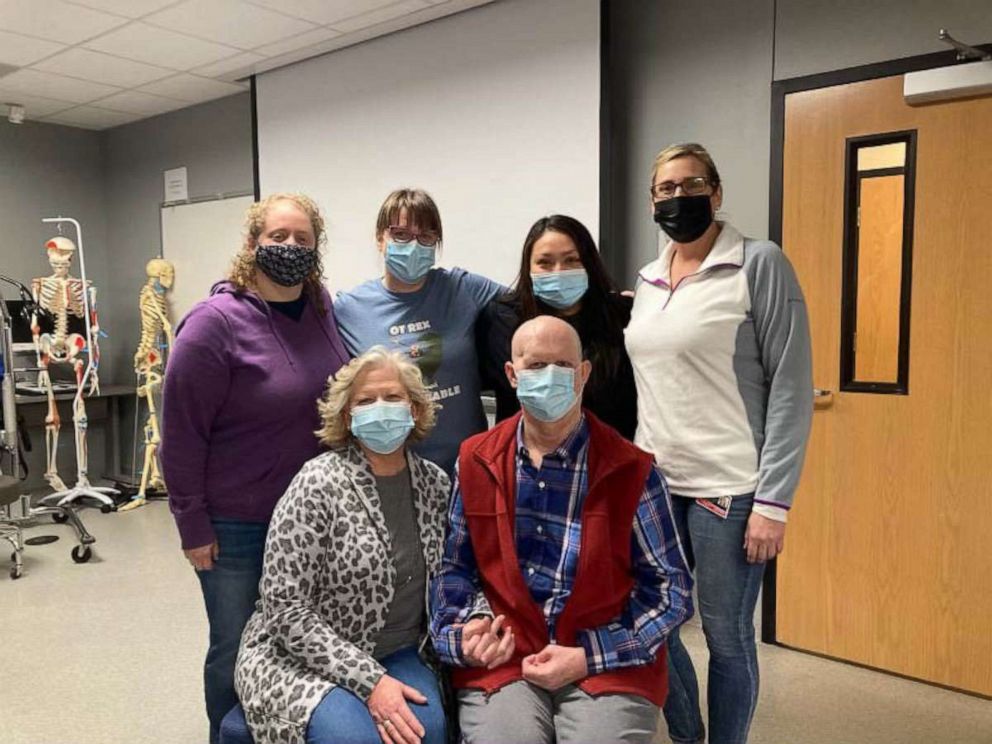 Courtesy of Emily Sisco
Kevin and Laurie Eubanks met the students who created the HugAgain at Arkansas State University.

“We kind of went through some options of how we could make something to lift his arm up and we just ended up simplifying it because it really is pretty simple. But it's just something that people don't think of,” James said.

The team has since received messages from around the world, asking for more information about the “HugAgain,” so they set up a Facebook page and decided to perfect the design and plan to sell it when it goes into production.

“If you make money off of it, then that's just icing on the cake, but that's really not our motivation for what we're doing,” James said. “We really want to see more reactions like Ms. Sisco's father, and just see how many lives that can be touched through this one small device.” 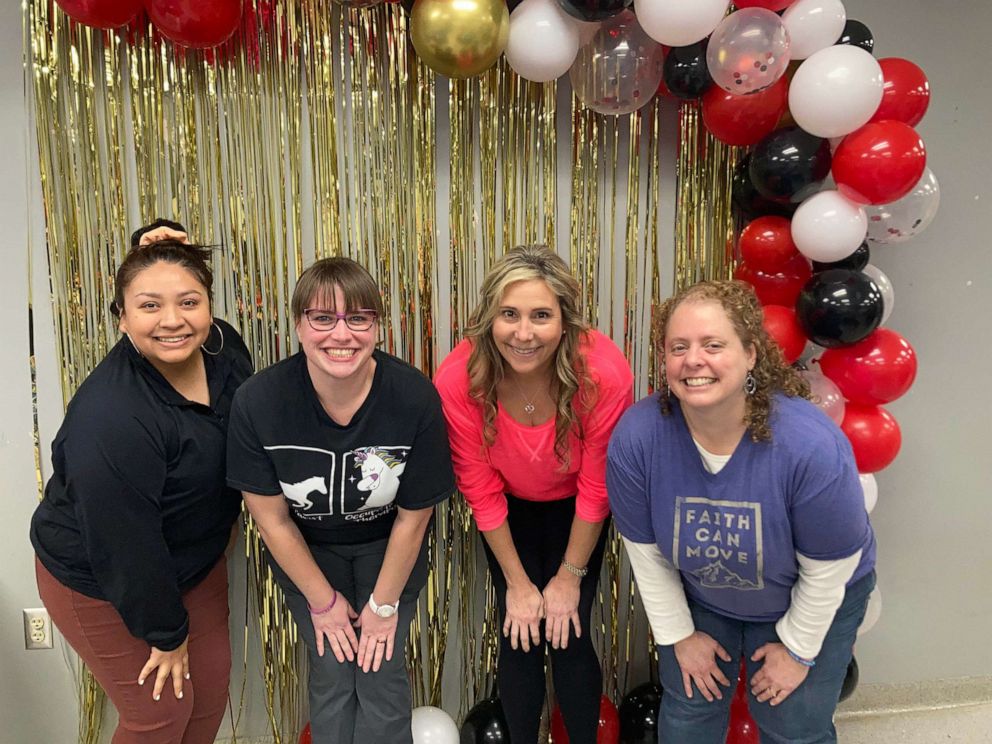 Courtesy of Emily Sisco
Larissa Garcia, Casey Parsons, Lisa James, and Erica Dexter at a celebration for their last day of class.

Added Dexter: “It's a thing that a lot of people take for granted. But you know, once it's gone, you do value that and you can value that again.”

James said the project taught her and her classmates not to overlook each person’s unique needs. “Even just the small things can be just as important or more important to an individual than what our plans are for that person," she said. "So I think it was a good lesson to really listen to what they're telling us and not what we think they need." 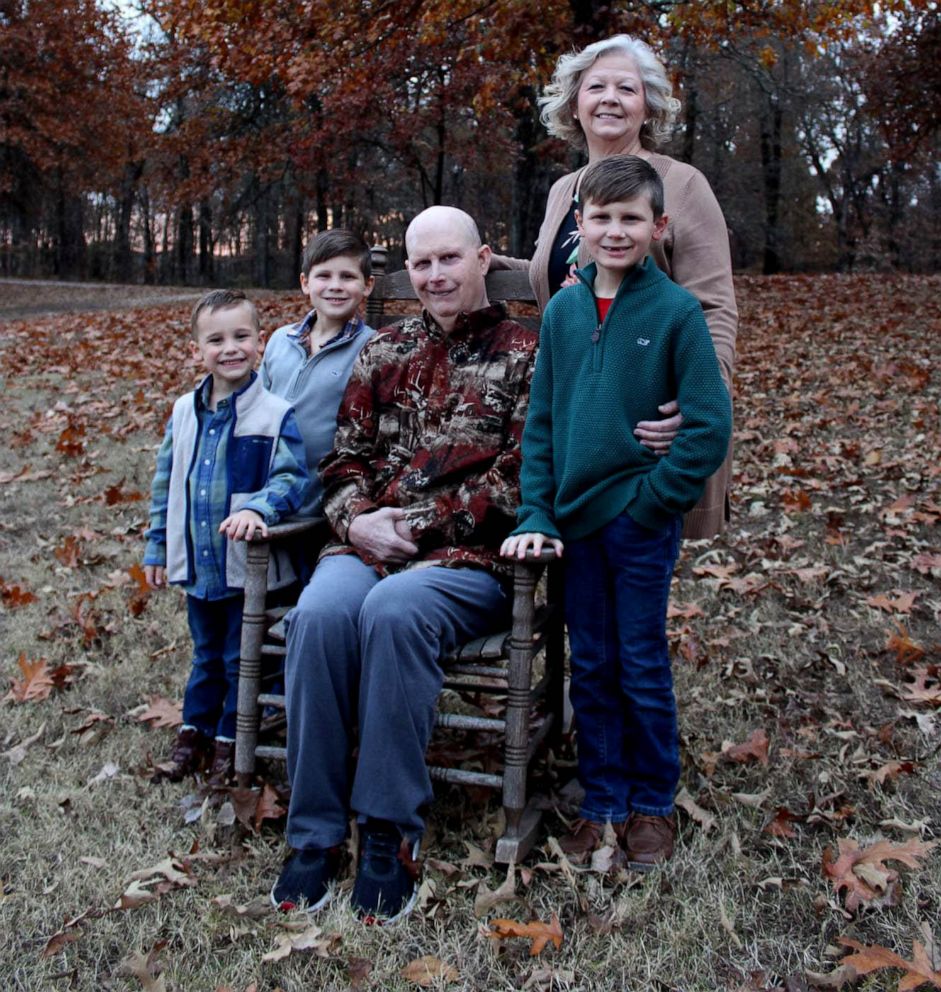 Courtesy of Emily Sisco
Kevin Eubanks with his wife, Laurie Eubanks, and their grandsons.

Eubanks said at the end of the day, the HugAgain and its impact is nothing short of extraordinary.

“I want people to know: Don't ever underestimate the effect of a touch of some kind, no matter if it's a handshake, a hug, or just putting your arm around somebody. That personal touch sends a message to that person that you love them and that can do so much to a person's confidence and mindset.”