A doctor who is on the frontlines of the coronavirus pandemic in New York City has captured viral attention with a message she shared on Twitter to her two children.

Dr. Cornelia Griggs, a 36-year-old pediatric surgeon and mother of Eloise, 4, and Jonah, 1, tweeted a photo of herself in full personal protective equipment on March 29 writing, “My babies are too young to read this now. And they’d barely recognize me in my gear. But if they lose me to COVID I want them to know Mommy tried really hard to do her job. #GetMePPE #NYC”

"[That moment] reflected a really raw and emotional moment for me in the hospital,” Griggs told “Good Morning America." "All of us who are showing up to do our job every day are facing the fear of getting sick or getting someone in our family sick and I wanted my kids to know that despite all of that fear and uncertainty and chaos, that I love my job. I would still choose to be a doctor 1,000 times over, because I feel privileged to do the work that I do."

My babies are too young to read this now. And they’d barely recognize me in my gear. But if they lose me to COVID I want them to know Mommy tried really hard to do her job. #GetMePPE #NYC pic.twitter.com/OMew5G7mjK

"My hope for my children, beyond their physical safety and health, is that they find something in the world that brings them that kind of meaning," she said.

Griggs has been treating patients inside a New York hospital since the spread of the novel coronavirus, COVID-19 -- the new respiratory illness in which more than a million have been diagnosed globally. There have been at least 1,562 deaths in New York City, according to data compiled by the Center for Systems Science and Engineering at Johns Hopkins University.

Griggs' "new normal" is a 24-hour shift at Columbia University Medical Center, where she treats patients with COVID-19.

Griggs said she made the difficult decision to move her children from New York City to Connecticut, where her parents could look after them for the time being. Her husband, Rob Goldstone, 36, who is a surgeon at Massachusetts General Hospital and Newton Wellesley Hospital, is fighting the coronavirus pandemic in Boston.

Griggs hasn’t seen her husband or her kids in two weeks. 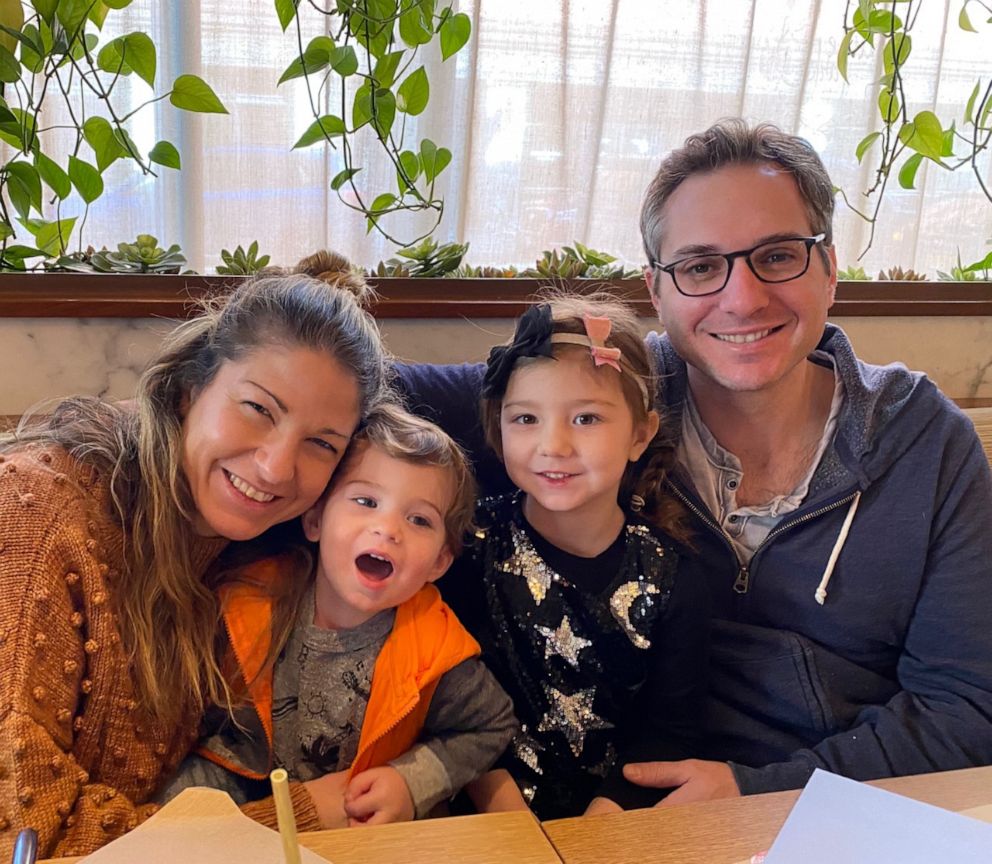 Courtesy of Cornelia Griggs
Dr. Cornelia Griggs holds her son, Jonah, 1, and pictured with husband, Dr. Rob Goldstone, and daughter, Eloise, 4. Griggs and Goldstone are both treating patients who have the novel coronavirus.

"My whole family is separated right now, which is really difficult. I don’t know when it will be safe for me to see any of them again, and that definitely takes a toll on my emotional and psychological well-being because my family is my support," Griggs said, adding that she and her family try to stay connected through FaceTime.

Griggs said it was a moment of vulnerability when she took to Twitter and posted a message to her children, which has resonated with parents everywhere. 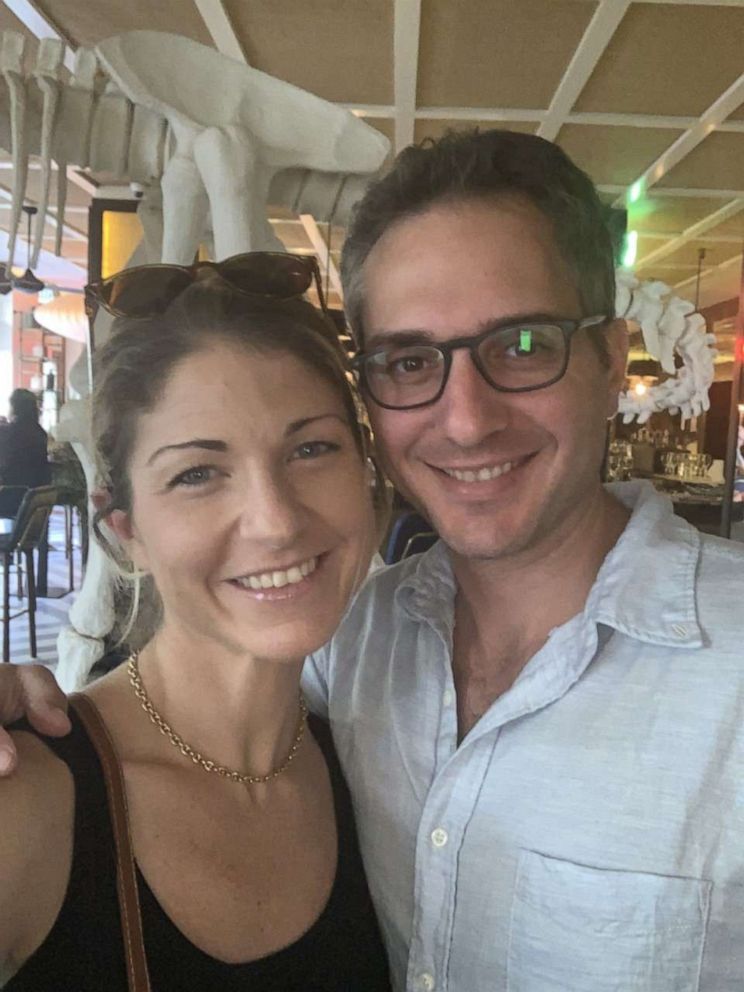 "[From the post] I heard so many beautiful words and messages of support and community, from people around the world, and it was incredibly inspiring. But I want to be really clear about one thing, which is that many people called me a 'hero' and that is not how I see myself in this moment,” Griggs said. “Quite the opposite actually, I feel very scared."

Working at a hospital amid the pandemic is scary, especially with equipment shortages, Griggs said.

The U.S. has a stockpile of 13 million N95 respirator masks. But the federal government has said up to a billion might be needed over the next six months.

N95 face masks are personal protective equipment used to protect the wearer from the transmission of airborne particles and liquid contamination.

"The impending equipment shortages are very worrisome, not only in regard to PPE [personal protective equipment] … With the surge of patients, many who are critically ill patients, we are facing potential shortages on critical medications to keep patients comfortable and sedated while on the ventilators," Griggs said.

"The uplifting part of working at a hospital is that despite that fear, everyone who is healthy, is showing up to do their job and to support each other and take care of our patients." 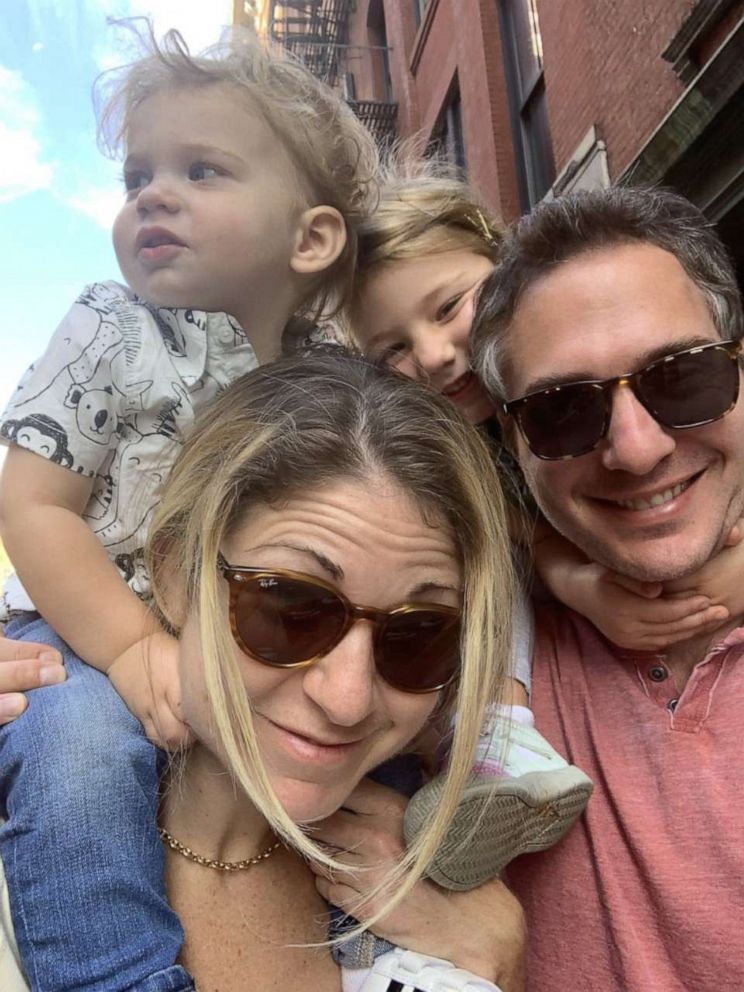 Courtesy of Cornelia Griggs
Dr. Cornelia Griggs of New York, is pictured with husband, Dr. Rob Goldstone, daughter, Eloise, 4 and son, Jonah, 1.
MORE: Amid coronavirus, couple races against time to be with baby being born via surrogate

Griggs hopes everyone at home can demonstrate bravery modeled by her colleagues by following social distancing rules or showing more kindness toward the vulnerable members of our community.

"As a parent, I hope that we all emerge from this crisis in a better place and use it as an opportunity to recognize that the things that divide us are so trivial in comparison to which unites us and make us similar," Griggs said.

"I hope that the world and the country can rebuild a better home for our children."