Two years ago, two women -- complete strangers -- embarked on a remarkable journey together and today, they say they've become "family." Now, they're opening up about their story in the hopes of helping others.

Kelly Taylor Savant, 41, of Baton Rouge, Louisiana, had been trying to conceive for six years. She and her husband, Kyle Savant, found out they were expecting twins in 2014 but then Savant had a miscarriage and underwent a dilation and curettage (D&C) procedure.

Savant says the procedure later led her to develop Asherman's syndrome, which according to the Cleveland Clinic, is a rare condition where scar tissue builds up in the uterus, which can lead to infertility. Within the six-year period, she had another miscarriage, tried in vitro fertilization, intrauterine insemination, and had other surgeries, all in the hopes of possibly growing her family.

MORE: Miscarriage and stillbirth: Everything you need to know but were too nervous to ask

Gestational surrogacy involves a surrogate or gestational carrier and an intended parent or parents. The practice usually requires in vitro fertilization of an intended parent's egg and the embryo is then transferred to the carrier, according to the Centers for Disease Control and Prevention.

Although data is limited, the CDC has reported that gestational surrogacy is on the rise in the U.S., with over 18,000 babies born by gestational carriers between 1999 and 2013.

Then she came across a Facebook post by Jasmine Johnson Isaac, a nurse and a mom of four from Denham Springs, Louisiana.

Isaac had been thinking about becoming a surrogate for a while, but didn't know where to begin. She decided to post online and hoped that someone interested would reach out. "As a young woman, I've always wanted to be a surrogate," Isaac told "GMA." "I have kids of my own, and the love that I have for my kids, I just feel like other women deserve the same thing."

The two connected and began talking online, later realizing they only lived about 15 minutes away from each other. In August 2020, they took a leap of faith and met in person for the first time.

The dinner was a success and the Isaacs and the Savants agreed to team up. Savant and Isaac searched for medical professionals to help them realize a shared dream and secured lawyers, Kristen Stanley-Wallace and Julie Udoessien, who walked them through the legal process in Louisiana.

They started the medical clearance process in September 2020 and by April 2021, they began the embryo transfer. Then, they hit a major setback -- Isaac didn't get pregnant.

"I at that point, honestly felt like I couldn't do it anymore. I had tried for now going on seven years because I was still trying every month myself, like why not?" Savant said. "She actually is the one, when I called her, she said, 'We're doing this again.' … And she is one of the only reasons, the most influential reason that I did a second transfer."

For the second transfer, Savant and Isaac switched doctors, seeking the care of Dr. Warren Jay Huber of The Fertility Institute of New Orleans.

By the summer of 2021, Isaac found out she was pregnant. "When I got a solid positive, I went to the store and I purchased a teddy bear and I got a little box," she recalled. "I put a picture of the pregnancy test inside of the box and it was pretty much telling her that it's a good chance that they have a baby on the way."

Isaac delivered the surprise present to Savant's workplace and left it with a secretary while Savant was away. "She was just so excited once she found that box and just to hear her on the phone and just to hear the excitement in her voice, it was everything for me," Isaac said. 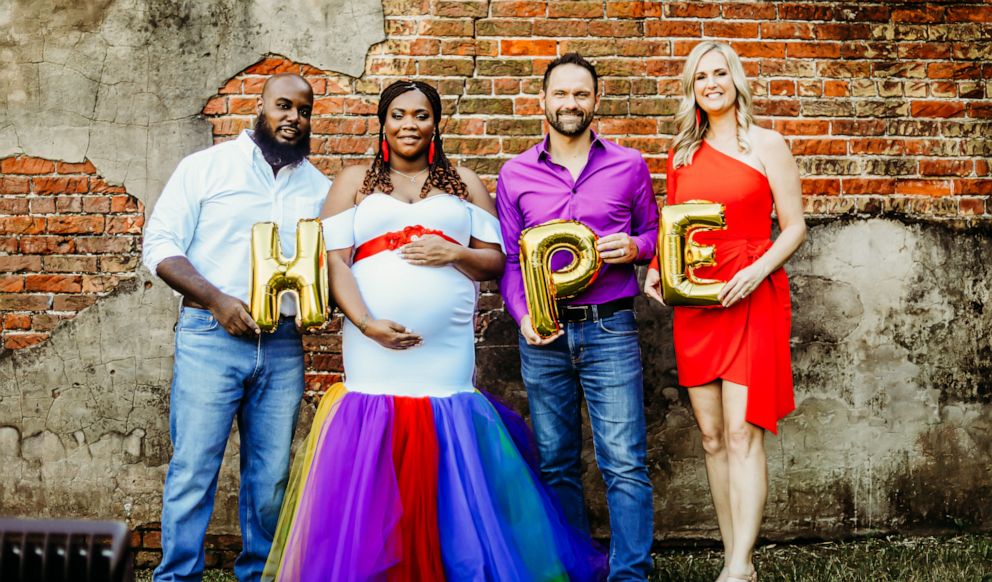 Courtesy of Erika Sullivan with Memories by Erika
Maurice and Jasmine Johnson Isaac with Kyle and Kelly Savant.

Along with Savant, Isaac credits her mother, husband of nine years, Maurice Isaac II, and one of her close co-workers for helping her through the surrogacy journey, one she was determined to see to the end. "In the past, I've had a miscarriage and just the feeling like my body isn't doing something that it was supposed to do, it took a toll on me. So of course, if I can help another woman get past that ... if they have that want and desire to have a child and I can help, I want to do that," she said.

"It's something that my whole heart is in," Isaac said. "The love that I have for my kids – who doesn't deserve to experience the same joy that I have, the joys of motherhood?"

Isaac explained that due to blood pressure concerns, doctors decided it was best for her and the baby to be induced. On Valentine's Day of this year, baby Ainsley Rain Savant arrived.

A nurse working with Dr. Kristin Chapman at Woman's Hospital in Baton Rouge, Louisiana, helped capture the special moment, taking photos during labor and delivery. Savant shared them along with a heartfelt message on Facebook, writing in part, "There just aren't enough thank you's in the entire world. Jasmine has single handedly changed me and Kyle's lives forever for the better and I thank God for her every day. She lives life with no fear, no regrets and a desire to make others happy! She's simply the best."

Savant says the big day felt surreal. "I was in shock when I saw the baby. I was immediately in love. I gave Jasmine a huge hug after and my husband did too and we have pictures of it all. I mean, it was the best moment of my entire life and Jasmine always says, 'Kelly you don't realize what you're doing for me.'"

"It's something that she's been waiting for a very long time," Isaac added. "So it was just so self-fulfilling for me to just do that for her. And just to see the expression on her face was enough." 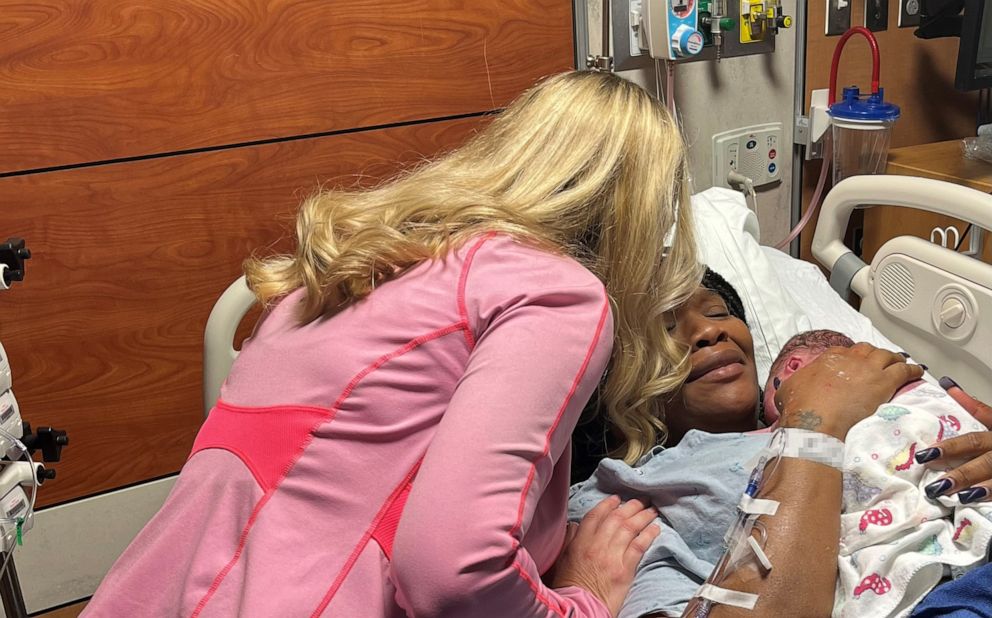 As for baby Ainsley's name, Savant said, "We wanted to use the name Rain as a middle name just to signify the rainbow after the storm. ... It's the blessing after all of the devastation."

A rainbow baby is a term often used for a baby born after a mother suffers a miscarriage, stillbirth or loss of an infant.

After their extraordinary journey, Isaac and Savant say they now consider each other family. "Not a day goes by since August of 2020 that we have not spoken," Savant said, adding that she considers Isaac "the best person I have ever met."

Isaac and Savant say they've had to navigate several regulations and laws in Louisiana, which only allows for gestational carriers if certain conditions are met.

Surrogacy is legal in the U.S. but not federally regulated, so laws vary from state to state.

In Louisiana, under HB 1102, a law passed in 2016, gestational surrogacy is permitted only for married, heterosexual couples and monetary payment for surrogacy is not allowed under the law.

"In Louisiana, a lot of people don't know how really strict it is," Isaac said. "My husband actually had to be involved with it and he's been supportive this entire time. He actually had to do lab work and testing and of course, he had to be on board with me doing it as well. I couldn't do it without him, without him agreeing that it's OK." 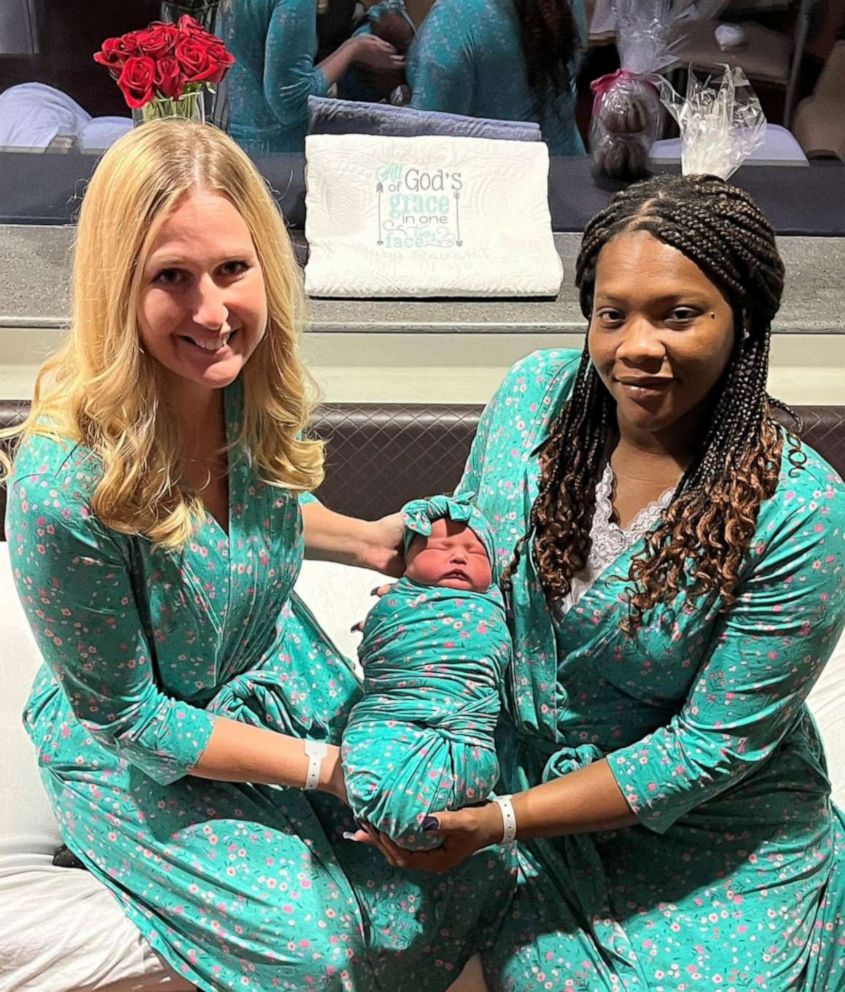 Courtesy of Kelly Savant
Kelly Savant and Jasmine Johnson Isaac both say they've gone from being strangers to "family," after Isaac became a surrogate for Savant and her husband.

"Jasmine and I's hope is that this brings awareness and Louisiana can start looking at their outdated laws and maybe make some changes," Savant said.

For others interested in becoming a surrogate, Isaac says you should be sure of your decision and recommends setting up a solid support system. "If you're interested in becoming a surrogate, of course, do not offer unless you know you're fully on board with doing so. You don't want to get anyone excited that you're going to do something and then step back on it. You kind of set them back a little bit doing so."

MORE: I've been a surrogate for 5 families: Here's what I want people to know about the process

Savant also hopes their story offers hope to others struggling with infertility. "I think women almost feel like there's no hope for them like, they just want to give up because it's too hard. So I would want them to know go see your fertility doctor. Join a few surrogacy Facebook groups, research the laws in your state. Go speak to an attorney."

"This can be done," she added. "You just need to be persistent, stick with it, and not give up your dream. Giving up can't be an option if you really want this."