Newborns at a Pittsburgh hospital truly made it a beautiful day in the neighborhood.

The adorable outfits were crocheted by Caitlin Pechin, a registered nurse at the women’s hospital. 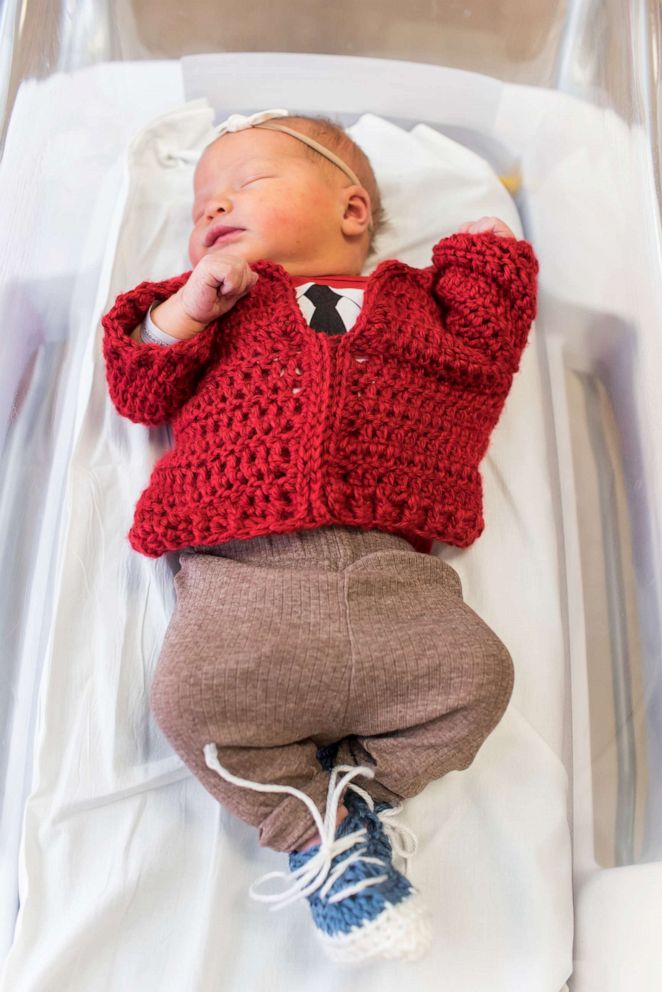 "It’s more just something I do for fun," said Pechin of the project, which took her hours to knit. "I really enjoy making things for all the babies because they look so cute in them."

Kristen Lewandowski and her husband, Michael, who just welcomed their first child, Mary Rose Lewandowski on Nov. 10, said the celebration was "really special."

(MORE: 'These dads are doing ballet with their daughters and we are here for it’)

"It was just a really special thing to see the red sweater and the shoes and to know that they were both knitted by one of the nurses in the hospital," Kristen Lewandowski told "GMA."

Like many, the couple grew up watching "Mister Rogers' Neighborhood," so the celebration really resonated with them. 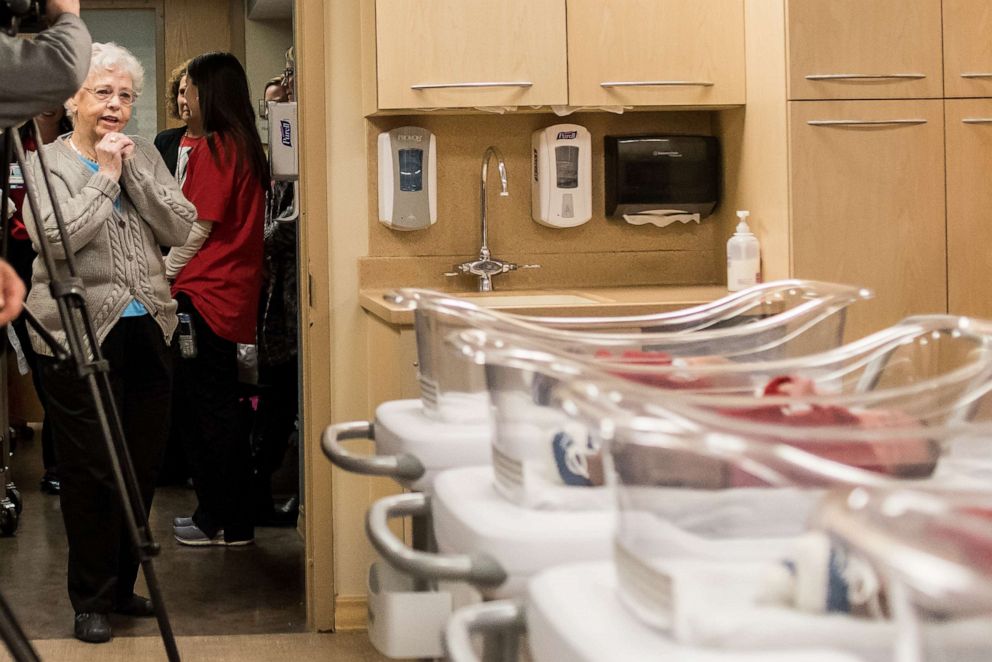 "In fact, when I was little I watched 'Mister Rogers’ Neighborhood' with my grandmother, my grandma Mary, who we named our [daughter] Mary after," Michael added.

The day became even more monumental when the newborns and their families were greeted by a very special guest: Mrs. Joanne Rogers, Fred Rogers' widow and a concert pianist.

"She was so sweet and so sincere and just wished us the best of luck as new parents," Kristen Lewandowski said, "and just told us to support one another and we thought that was great advice."

(MORE: 'School comes together to support 'Super Nicholas' as he awaits new kidney’) 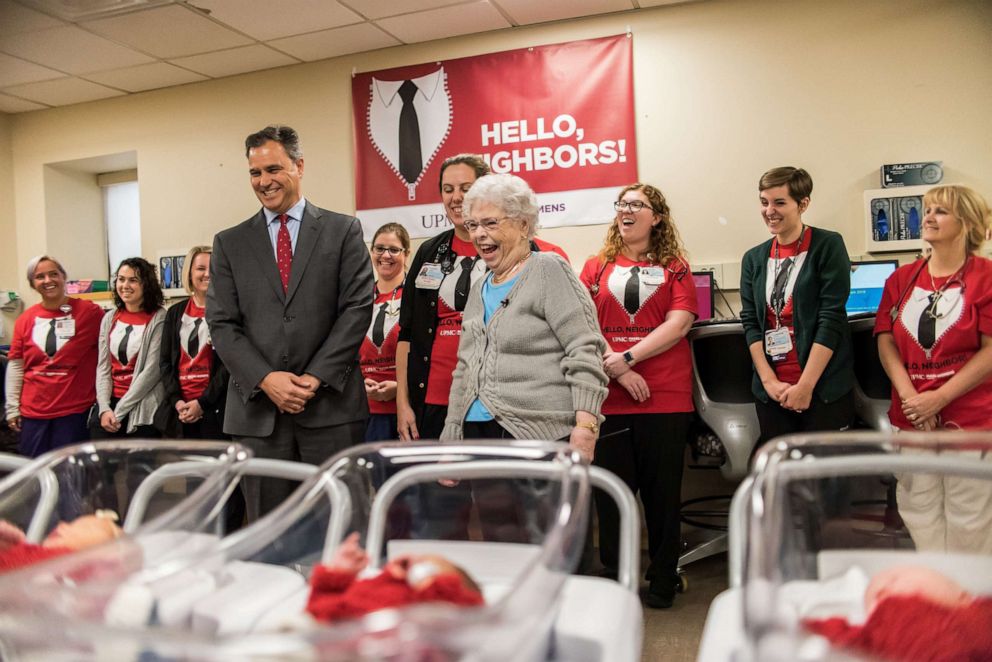 Upon entering the hospital, Rogers, who was wearing an old sweater that belonged to her late husband, was serenaded by hospital staff and employees singing a piano rendition of "It’s a Beautiful Day in the Neighborhood." Nurses and hospital staff also wore T-shirts that looked like red sweaters to channel Mister Rogers' signature look.

Afterward, Rogers met with the "adorable" babies dressed up as mini Mister Rogers and their families, including the Lewandowskis. She said her husband would have also loved seeing the babies and spending time with all the new parents.

The Lewandowskis said they plan to share Mister Rogers' important life lessons on acceptance and kindness with their daughter, Mary. Meeting Mrs. Rogers was a reminder "to carry on the legacy of what Mister Rogers spent his lifetime and his career trying to spread: that message of kindness," the couple told "GMA." 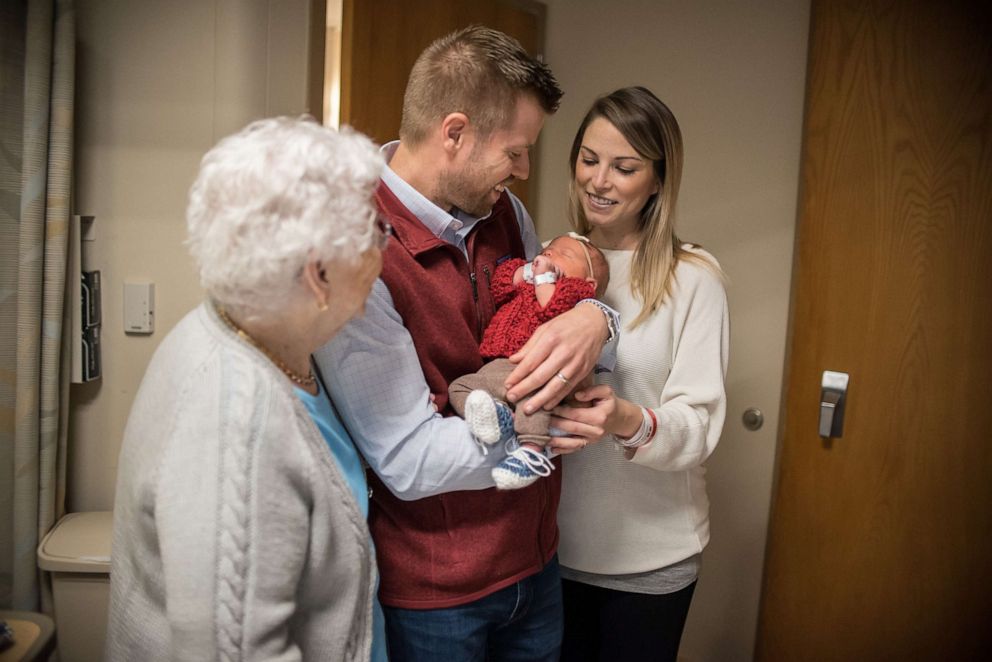 Fred Rogers was the creator and host of the popular children’s TV show, "Mister Rogers' Neighborhood," from 1968 to 2001. He won the Presidential Medal of Freedom in 2002 and a Peabody Award in 1997. Rogers died in 2003 due to stomach cancer.

Rogers' widow told "GMA" she has seen the Fred Rogers biopic, "A Beautiful Day in the Neighborhood," starring Tom Hanks, and is looking forward for others to see it as well. The movie will be released Nov. 22.

"Is that not exciting?" she said. "How absolutely wonderful that he’s become history. To me, it’s just unbelievable and I’m thrilled for him."