Elissa Rogers and Kevin Rogers, parents of Curtis Rogers in Raleigh, North Carolina, share their thoughts in wake of George Floyd's death in a personal essay below.

Our son is 7 years old and when dressed in his snazzy suit and bow tie, he's undeniably adorable.

You don't notice that he is tall for his age, has broad, athletic shoulders and a frenetic energy about him. He is polite and thoughtful--if not a tad impulsive.

But put him in basketball shorts and a hoodie on a poorly-lit street, he'll look nearly twice his age. Some might say scary or menacing and even call the police if he walked by their home at night.

You may have caught a glimpse of our son Curtis this week dressed in his dapper 3-piece suit, flashing his smile as he posed for pictures with his babysitter, Rachel. Curtis threw a "mini-prom" for Rachel because he was sad that hers was canceled due to COVID-19 and wanted to brighten her day.

We posted pictures on Facebook and before we knew it Curtis and Rachel had gone viral in a wonderful, feel-good story of a boy trying to make the world a little bit brighter during the pandemic. 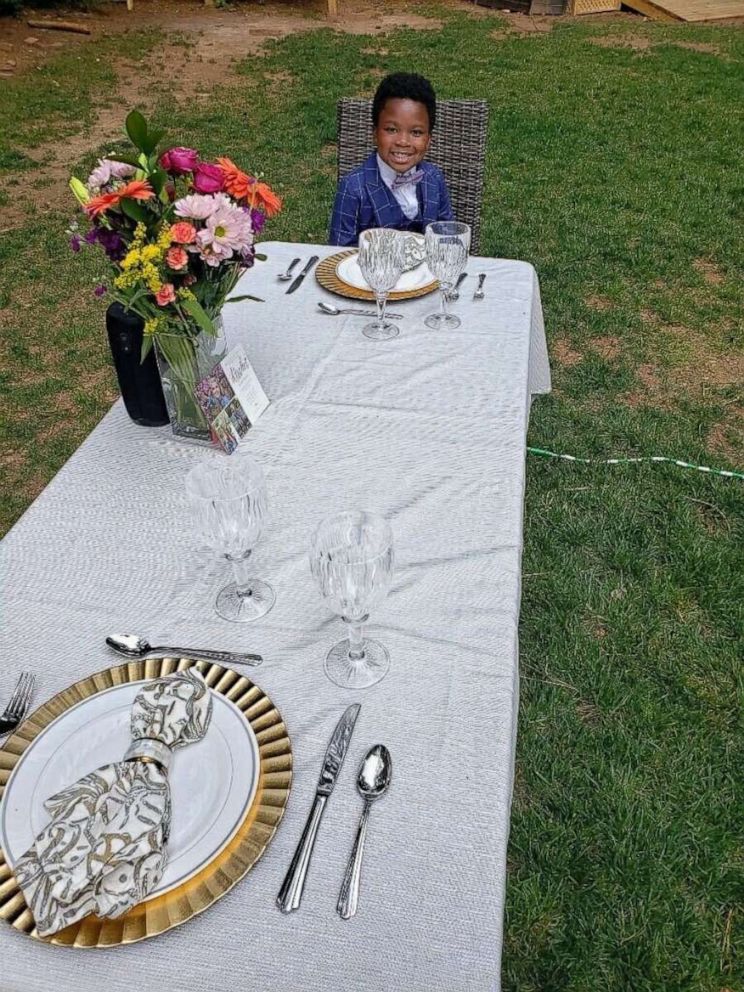 Elissa Rogers/Becky Chapman
Rachel Chapman was surprised with dinner and a dance all thanks to 7-year-old Curtis Rogers. With help from his mother, Curtis put the event together in his own backyard. Rachel is a senior at Sanderson High School in Raleigh, North Carolina.

Conversely, if you have seen the news this week, you may have also spotted images of George Floyd being slowly killed after being pinned down by a Minneapolis police officer. The subsequent outrage from the community has since spread around the country. It’s another story of the deadly hold institutionalized racism has in America.

The two images of Curtis and George were circulated at the same time. Their stories were read by the same people, and in some cases even reported on by the same journalists. Though they told very different stories.

In one, a young Black male made a sweet gesture to his white babysitter and the world rejoiced at his pure heart and magnanimous personality. In the other, a Black man died under the knee of a white officer. Protests ensued and cities started to burn. 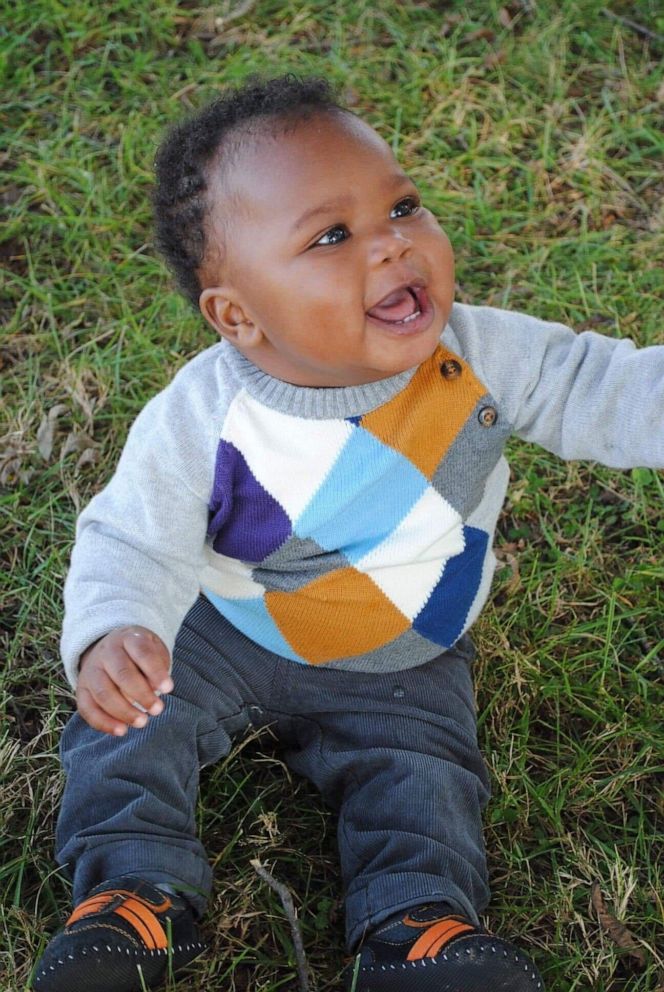 While both stories may seem completely unrelated, as white parents to a Black son they illustrate the same story only told from two different sides.

The trope of the “scary Black man” and their implied threat to white people is as American as apple pie. We know the rate at which Black Americans are killed by police is significantly higher than the rate for white Americans, and every time we hear about another Eric Garner, Tamir Rice, Philando Castile or George Floyd, our hearts skip a beat. 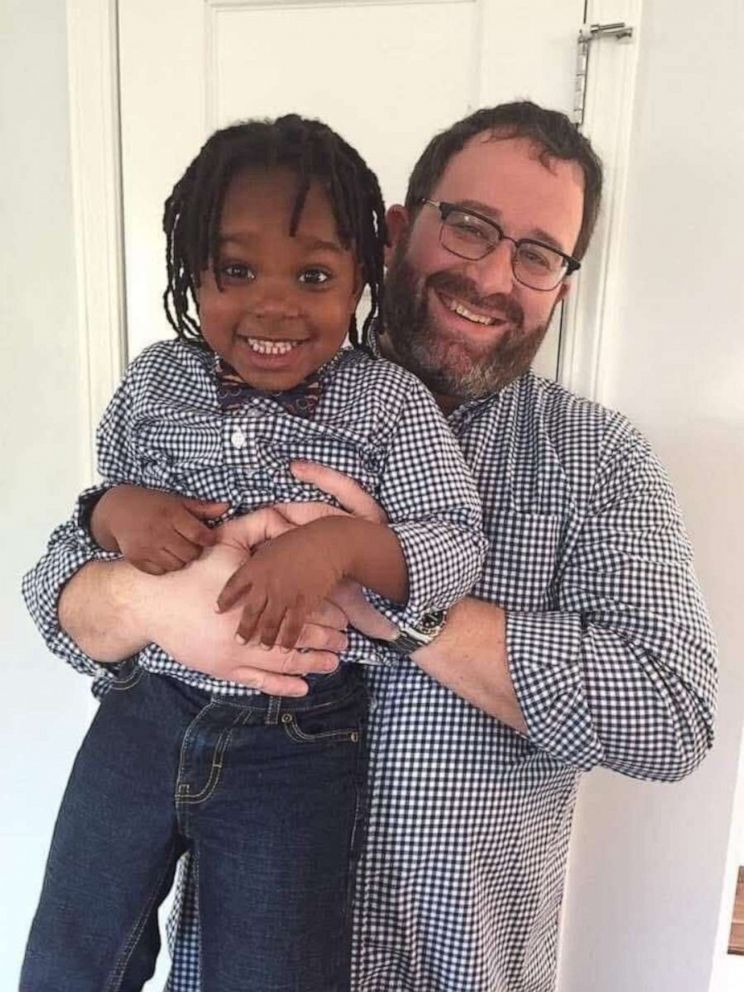 Elissa and Kevin Rogers
Curtis Rogers, 7, is seen in an undated photo with his father, Kevin Rogers of Raleigh, North Carolina.

How long will it be until our son, the kid that is quite literally the poster child for kindness and generosity, suddenly becomes the next scary Black man to cross paths with a white police officer? Our protective veil of white privilege has helped keep him safe for now, but that is beginning to fray as he begins to take his first, fragile steps of independence into the world.

Our concerns as parents are not unique. Millions of non-white parents across the country have the same concerns. While we fear greatly for our son's future, it is in some ways an uninformed fear because we do not know racism personally; we have only experienced it externally.

As white parents who adopted a Black child, we have experienced the raised eyebrows when we enter the wrong restaurant, the sneer of indifference when he plays on the playground in another neighborhood or the puzzled look when he runs over and gives one of us a hug. 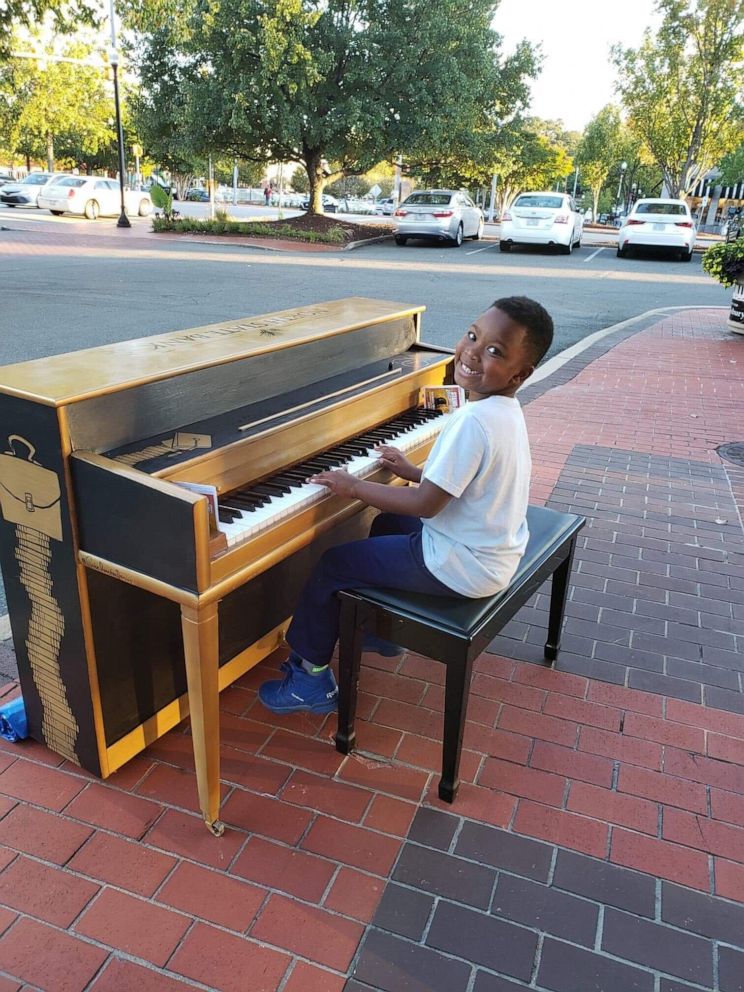 Elissa and Kevin Rogers
Curtis Rogers, 7, is seen in an undated photo playing the piano.

These are minor slights. We know it can, and will, get worse. We are still learning, understanding and doing our best to have our son fully understand both the positive and negatives that come with being a Black man in America.

It is impossible not to notice the dangers he will have to face in his childhood and adolescence that we ourselves never had to navigate. To us, a traffic stop is not a life or death ordeal to be survived – it is a minor inconvenience. We have never been handcuffed and detained on the street because we “fit the description of a suspect.” We have never watched a body cam video of anyone we know being executed. The differences are stark.

The very notion that our sweet little boy could be the poster child for the next act of police brutality is unthinkable. Yet, the reality is Curtis and George are not all different. 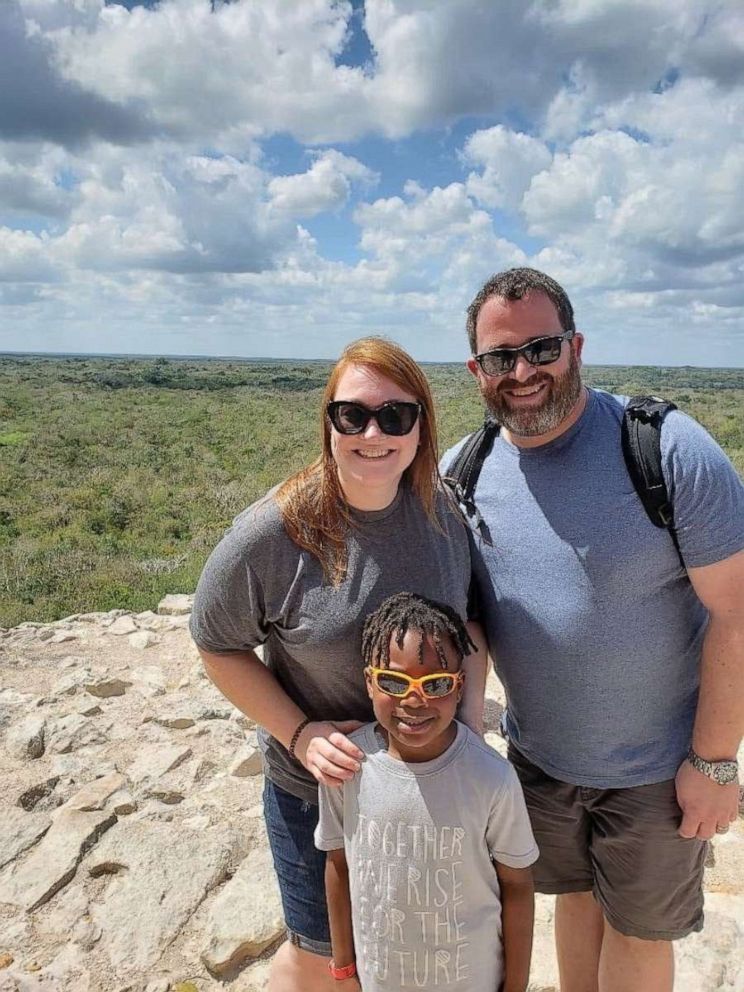 George’s fate could be Curtis’ fate. If you take that level of parental anger and anxiety and repeat it millions of times across this country, it becomes a highly toxic blend of rage and fury.

If you are wondering why Minneapolis, Portland and Atlanta are burning, think about Curtis. And then Ahmaud Arbery. And then Breonna Taylor. It all starts to make sense.

We have never had "the talk" with Curtis about race. This is not a box that can merely be checked for any child. It has to be a continual dialogue about race, diversity and equality. Through exposure to diverse dolls, toys and books on historical Black figures it continues to be a gradual process. 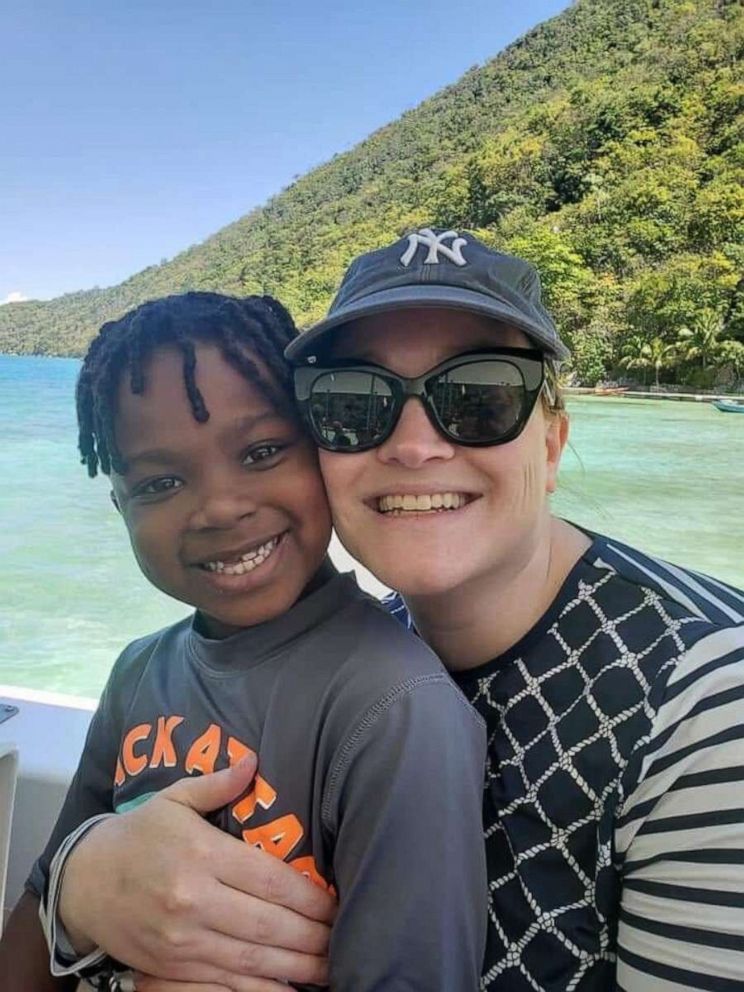 Elissa and Kevin Rogers
Curtis Rogers, 7, is seen in an undated photo with his mother, Elissa Rogers of Raleigh, North Carolina.

We have the conversation that although he must be respectful of authority, police authority is different. It is to be respected, but it is not always there to help him. That is a confusing message for child, but a necessary one.

We do things large and small to reinforce those ongoing lessons. The large ones include discussions with our friends on how to advocate for Black children so they can teach their children to do the same. We ensure diverse role models in Curtis’ life and moved to find a more diverse and inclusive school.

The small things include buying bandages to match his skin, staying away from clothes that could make him "scary" (black hoodie) and helping him have pride in his hair. It's not a singular action, but an everyday intention--celebrating diversity, openly talking about news and the frustrations of inequality we personally face as a family to help Curtis understand what he is experiencing as a Black boy. 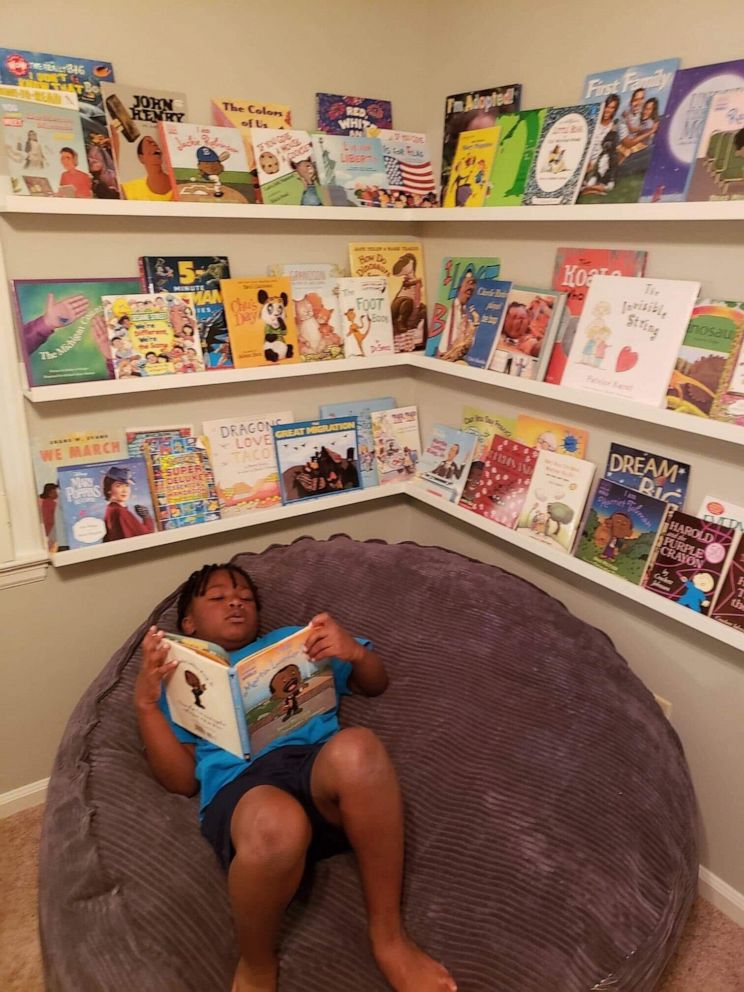 Elissa and Kevin Rogers
In May 2020, 7-year-old Curtis Rogers gained viral attention after throwing a backyard prom for his babysitter in Raleigh, North Carolina, after hers was cancelled due to COVID-19. Here, Curtis poses in an undated photo, reading inside his home.

Talking is great, but listening is better. The stories of Black America are more available. Streaming documentaries, local panel discussions and carefully-chosen social media can be important tools, but please do not put your burden on your Black friends – this is your work to do, not theirs. 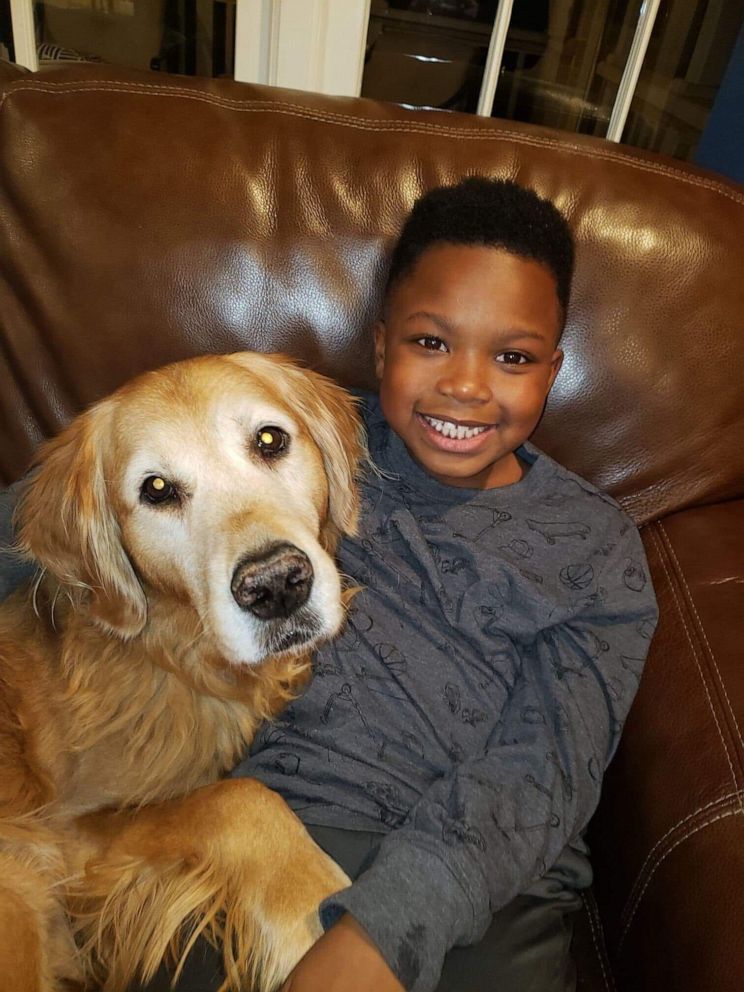 Elissa and Kevin Rogers
Curtis Rogers, 7, poses in a photo with his dog in Raleigh, North Carolina.

Challenge family members or friends when they say something biased, ask questions about why they feel that way and push back when they roll out a tired, old racial stereotype.

Expose yourself and your children to a healthy mix of role models and racial mirrors. Every race, every gender, every size and every type of person expands the idea of what “normal” and “beautiful” can be. Representation matters in books, movies, video games and in-person instruction. Be purposeful about those choices and don’t let white be the default. 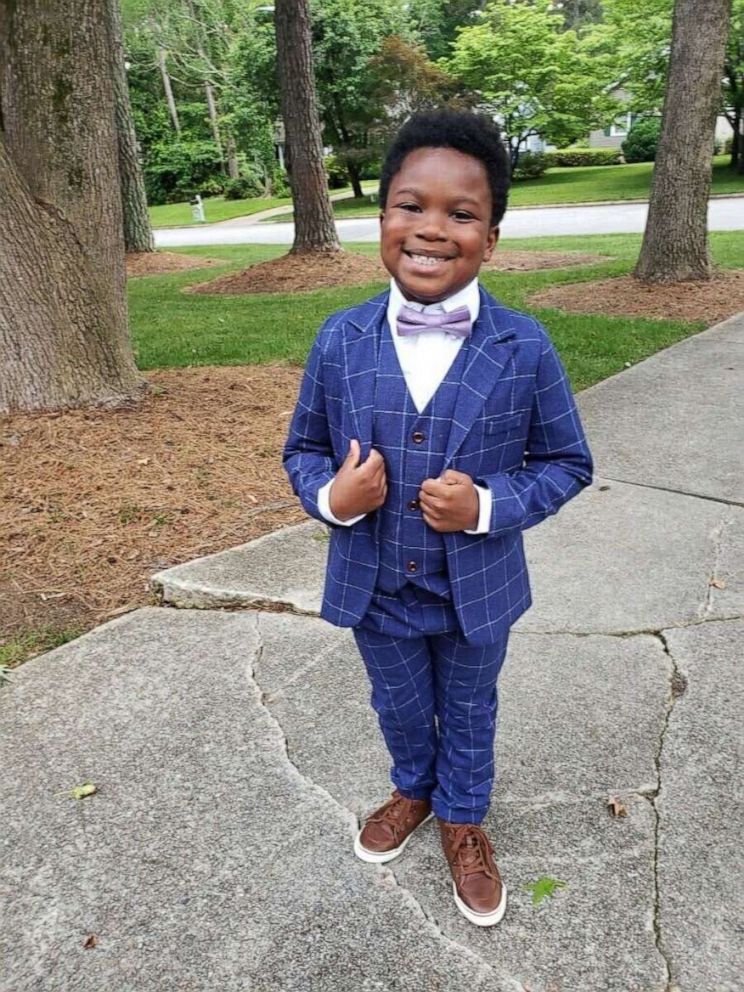 Elissa and Kevin Rogers
In May 2020, 7-year-old Curtis Rogers gained viral attention after throwing a backyard prom for his babysitter in Raleigh, North Carolina, after hers was cancelled due to COVID-19.

The images of Curtis and the images of George do not tell different stories – they are the beginning and the end of the same story. It is a story born out of slavery, written by white supremacy and published daily by law enforcement all across this country.

Fortunately for us, we still have time to re-write the ending to this story. Unfortunately for Curtis and his entire generation, we don’t have much time to do it.