An ambitious 8-year-old with a dream set out to accomplish a lofty goal, and to everyone's surprise, it all worked out in the end.

Nash, a third grader from Lexington, Kentucky, was on fall break when he decided to apply for a job to earn enough money for an Xbox. Belinda Johnson, Nash's mother, told "Good Morning America" the enterprising 8-year-old had seen a hiring sign on display outside of a Drake's restaurant near his grandmother's house and went online to submit his application for consideration.

"Nash has expressed his wishes for Christmas. He wanted an Xbox. But I guess, seeing the signs and everything, he decided that he was going to try to apply to make sure he got his Xbox," Johnson told "GMA."

The boy then told his mother what he had done.

At first, she didn't think much of it. "In complete honesty. I was just like, 'OK, alright. Whatever Nash,' " Johnson recalled. "Nothing surprises me with this kid. He is quite creative and can come up with some things and sometimes I sit and question like, 'Why? Where did this come from?' "

Nash, who has learned the merits of saving, earning and giving money from his family, decided to apply for a dish machine operator job at the local Drake's restaurant. The application caught the eye of the Drake's kitchen manager, who shared the unusual application with Mark Thornburg, the chief operating officer at Drake's. 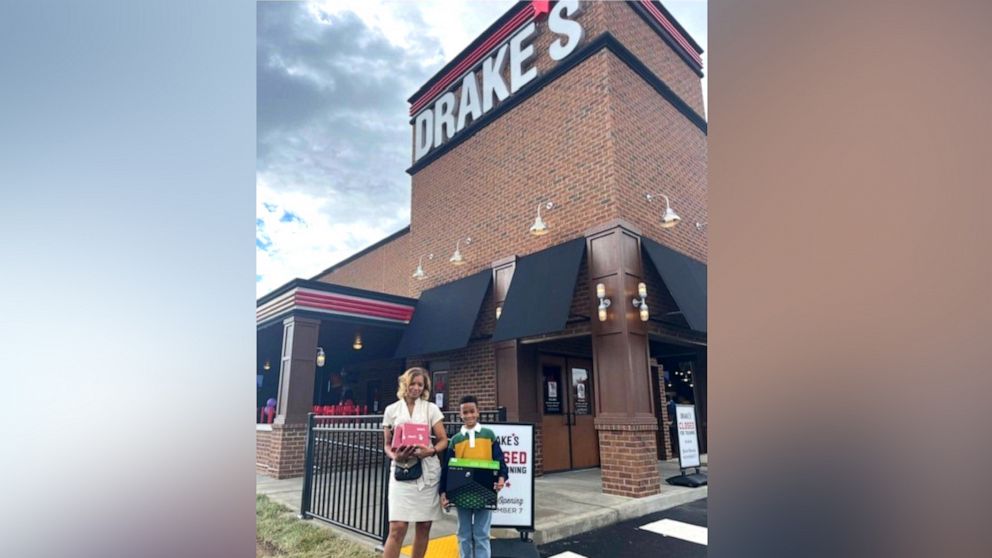 Courtesy of Detra Johnson
Nash with his grandmother, Detra Johnson, outside of Drake's restaurant in the Leestown area of Lexington, Ky.
MORE: Teaching children the value of money

"At the very bottom of the application, he put that he was 8 years old … and when the kitchen manager saw the application, she just assumed that he forgot to put the 1 in front of the 8. And so she called him in very innocently," Thornburg told "Good Morning America." "The number that he put on [the application] was his grandmother's house and … she asked for Nash and Nash gets on the phone, and he says, 'Well, I'm only 8 years old.' "

When the team at Drake's heard Nash's story, they couldn't resist reaching out.

"I said, 'We got to do something for this young man. He's obviously very special,' " Thornburg said, adding that in his 30 years in the restaurant industry, Nash "definitely is the youngest applicant" he's come across.

MORE: Mom holds 'job fair' for her kids after they kept asking for money, cellphones

Thornburg invited Nash and his family to join the Drake's team at their hiring orientation and later, the ribbon cutting ceremony for the company's new location in the Leestown area of Lexington. Thornburg personally surprised Nash with his very own custom Drake's uniform work shirt and even a brand new Xbox to call his own.

Drake's
After Drake's staff learned an 8-year-old named Nash had applied for a job at their restaurant, they invited him to their new location in Lexington, Kentucky and presented him with his own Drake's uniform shirt. 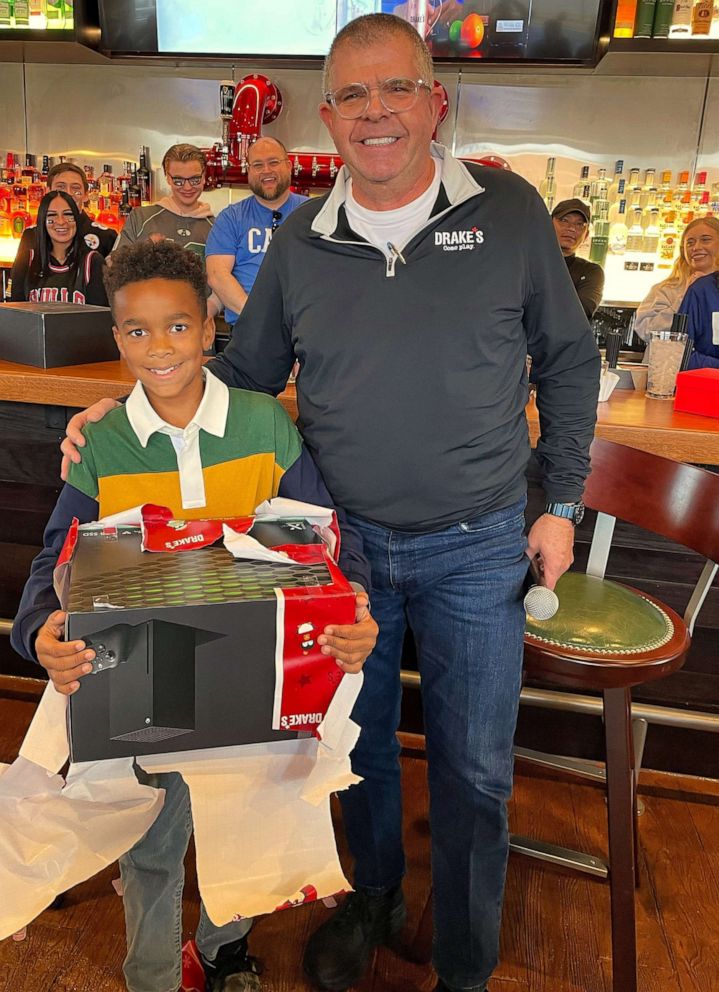 Drake's Restaurant
Nash was surprised with an Xbox console by Drake's staff at Drake's restaurant in the Leestown area of Lexington, Ky. 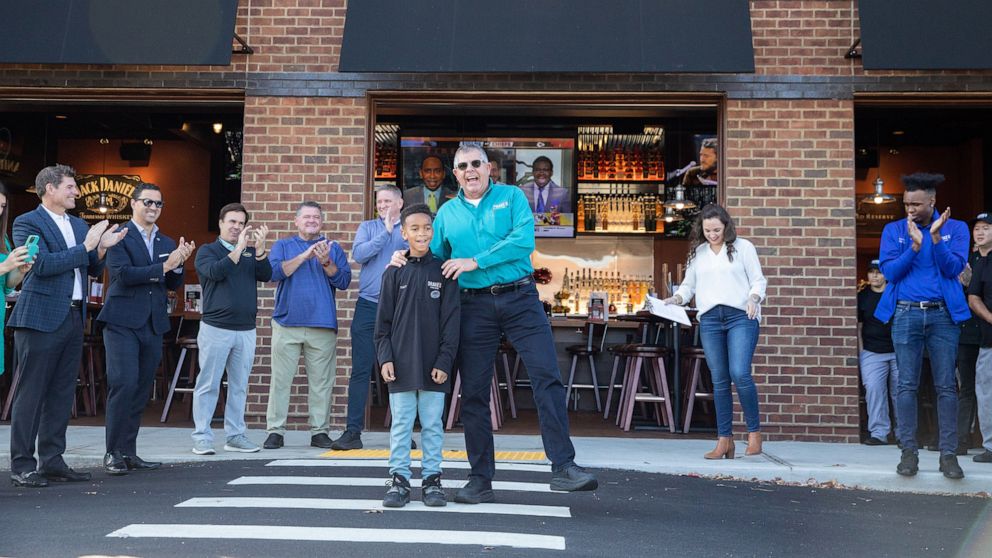 Drake's
Nash, 8, was welcomed at Drake's restaurant in Lexington, Kentucky after he caught the staff's attention by applying for a job at their new Leestown location.

"He was like, 'I'm just so shocked and I'm so happy. I don't know why I want to cry though, mom.' And I'm like, 'Sweetheart, that's a normal reaction,' " Johnson recalled, noting that "Christmas came a little early."

Thornburg added, "I tell a lot of people he would have been just as happy with his uniform shirt because his eyes got about as big as a softball. I mean, he was so excited when I gave him his uniform shirt. … But then obviously when I got the Xbox out for him and he got to open that up, it is, to say the least, it's changed the little guy's life for sure."

Even though he didn't get the job -- the minimum age for that type of job in Kentucky is 16, after all -- Thornburg said Nash was curious about the role anyway and asked him to show him how the dish machine worked not once, but twice. 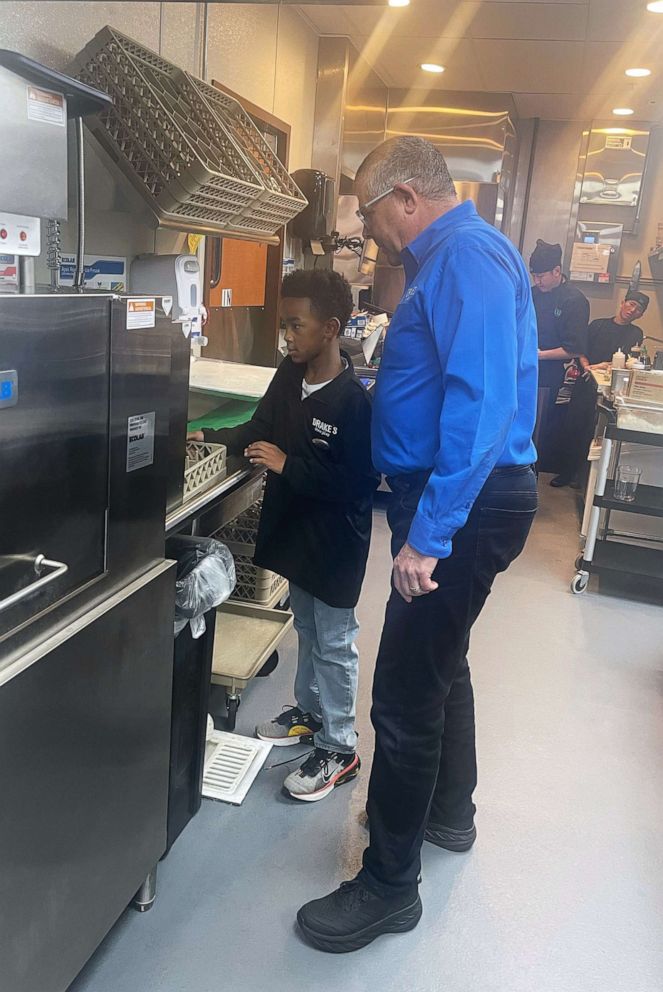 Drake's
Mark Thornburg, the chief operating officer at Drake's, showed Nash what the restaurant's dish machine looked like and how it worked.

"We've got to be great friends through all this," Thornburg said.

When Nash is older, his mom said he wants to go work at Drake's.

For now, Thornburg said Nash has kept him on his toes.

"He says, 'Mark … I think I'm gonna go to work at Chick-fil-A when I'm old enough.' I said, 'Why?' He said Chick-fil-A's a lot busier than what you are. I said, 'Nash, I've been open an hour! This is a new location. Give me some time to build the business.' I said, 'Man, you are hard on me,'" Thornbug recalled with a laugh.