Maria Irra eyeballs a spoonful of masa mixture into a corn husk -- filling it with pork in red salsa and chicken in green salsa, respectively -- then wraps each one; a task she's performed since she was 12.

The process looks more like a dexterous dance as she wraps each tamale and places it vertically into a large pot to cook her family's namesake dish to tender perfection, filling their Afro-Mexican restaurant with the traditional smells of Guerrero. 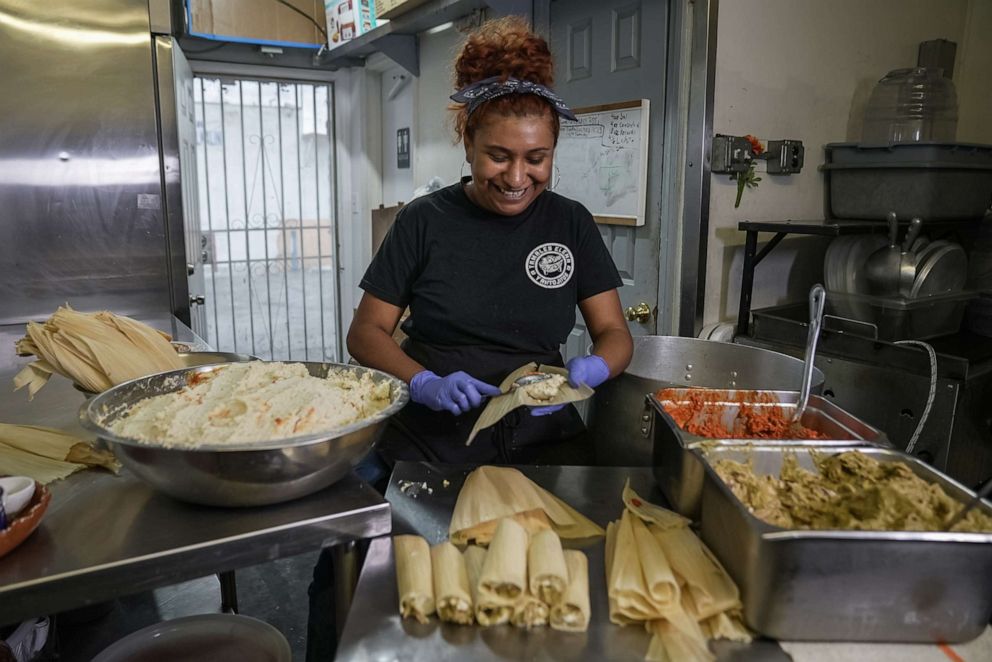 Tamales Elena y Antojitos -- the Irra's unassuming white stucco restaurant with large windows, bright blue trim and a small patio with outdoor seating on a corner of East Los Angeles -- is the physical manifestation of the extended family.

"My parents migrated to the United States from La Costa Chica in Guerrero, Mexico, when I was 1 year old. So I was around tamales all my life," Irra, 30, told "Good Morning America." "My mom's mom was already here and she taught my mom and my dad how to make tamales -- we started doing tamales as a family when I was 12 years old. All the smells, all the tastes were already there, I just didn't know how to assemble them myself."

Ever since her father, Juan Irra, tasked her with adding his secret masa recipe to corn husks in their family's kitchen, hundreds of her family's tamales have passed through her hands.

"It's been a family bonding time -- we used to make an assembly line. My dad used to put the masa on the corn husk, I used to put the filling, one of my sister would add them to the pot," Irra said. "We used to take that time after they would get home from selling them in the street from a grocery cart and us from school, we would come together and do tamales as a whole family and talk about our day. To me, well to us, it's a very beautiful memory." 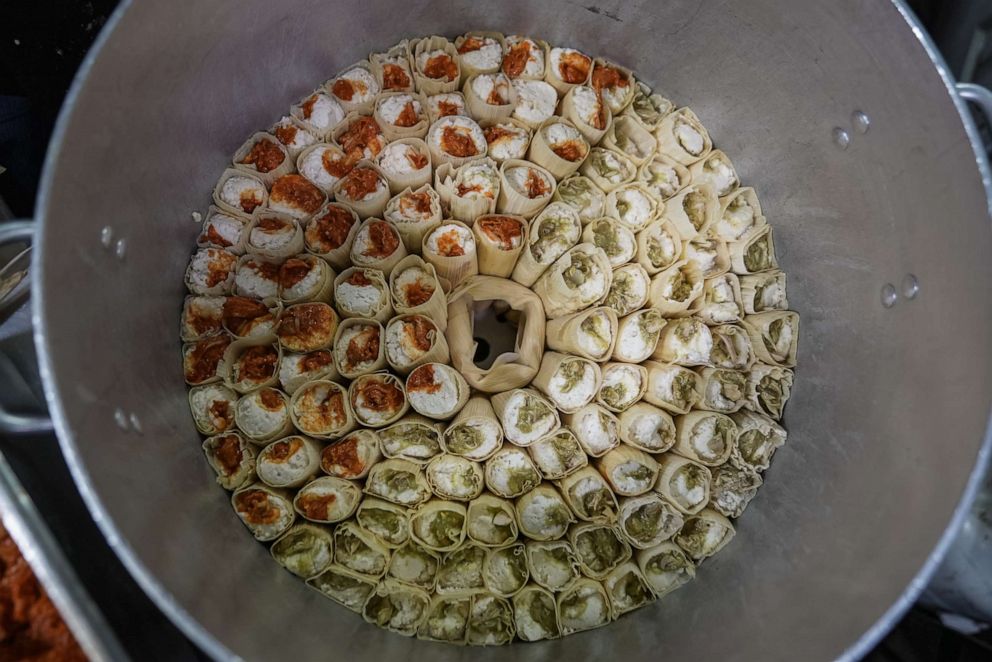 Bill Esparza, a James Beard-winning food writer and author of "LA Mexicano," knows all about the city's Hispanic heritage and its famous dish.

"Los Angeles is a city of tamales. You can find regions of Mexico represented -- tamales and all their variations from Guatemala, El Salvador, Honduras -- different wraps, all types of leaves, corn husks, banana leaves," Esparza told “GMA.” "This is a way of connecting with our roots with our culture.”

Esparza unwrapped the layers of tamale culture and explained to "GMA" how indigenous ingredients specific to various regions impact both preparation and taste.

Whether it's eaten on a weekend morning, a holiday or a special occasion, Esparza said "the tamal is an antojito," a snack that celebrates native Hispanic culture and is "very distinct to each culture."

"It really represents our culture more than any other food. It's the original creation that was made with masa, nixtamalized corn," which he explained is corn that's cooked in a lime solution and completely transforms the texture. "It's really the world's first molecular gastronomy or modern cooking. ... You can mold it into a tamal, which was used as a utensil. ... Before there were tortillas, there were tamales."

Within each Hispanic culture, Esparza said there are "many variations and many ways to do it. And a lot of specialties. There are thousands of tamales." 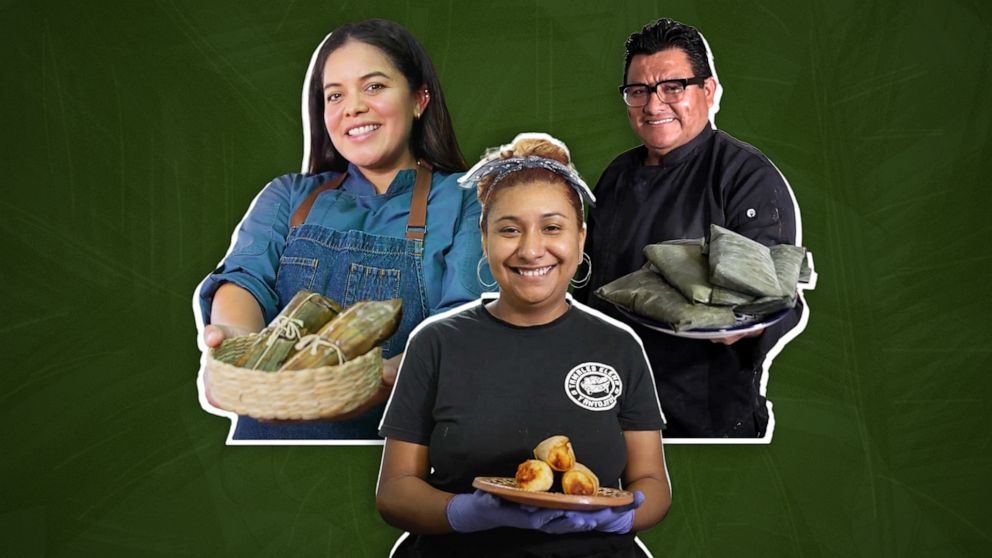 Zapotec chef Alfonso "Poncho" Martinez serves up traditional Oaxacan cuisine at his south Los Angeles restaurant, Poncho's Tlayudas. While his eatery is famous for the namesake regional favorite, a large handmade thin corn tortilla toasted over an open grill, it's his tamales de frijol that fold in layers of indigenous ingredients and history. 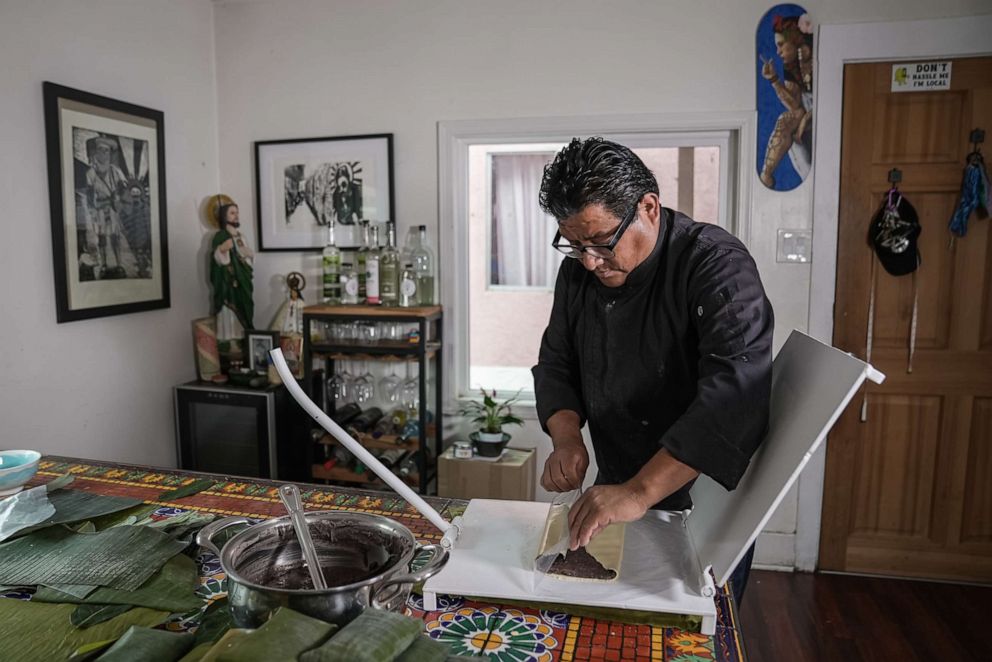 "There are Zapotecs from different areas of Oaxaca -- the northern highlands, the southern isthmus and the central valleys -- and so the food varies just like the language," he explained. "We make them so big because we make tamales communal -- it's ceremonial, they're very important tamales. We don't make tamales every day or every week, just for special, special events."

Poncho uses a tortilla press to squish masa into a notably larger and thinner style of tamal. He tops the dough with pureed black beans spread almost to the very edge and folds it inward like a masterfully wrapped present before flipping it over to repeat with more folds. An avocado leaf is pressed into both sides of the flat, folded tamal, which Poncho said helps infuse the scent of the avocado skin, then the whole thing is wrapped in a banana leaf and steamed, the signature of Oaxacan-style tamales.

"We use a banana leaf because it's big and you can find it easily in Oaxaca. We grow the corn, we grow beans and avocado, so we have everything in our region," he explained. "We make these tamales because we don't eat meat every day. We only eat meat maybe three times a year."

Esparza added, "The tamale wrapper is unique to each culture -- whatever local products they have and whatever local cuisine they have, those are the leaves they have to use. It also creates a variety of cooking techniques."

A taste of El Salvador steamed inside banana leaves

Chef Wendy Centeno found the perfect vehicle to celebrate her Central American heritage in Southern California, when she began handing out meals from the window of food trucks. VCHOS, her business named after the slang term for young people, serves up traditional Salvadorian family recipes from pupusas to tamales.

"It means a lot to me to be serving and representing Salvadorian cuisine the way I grew up eating it until I was 22 when I moved to this country. These are the flavors I grew up eating every single day," Centeno said. "I don't want the tradition of our food to get lost, so our mission is to show LA our culture, our flavors and have new generations follow and taste that from El Salvador and our cuisine." 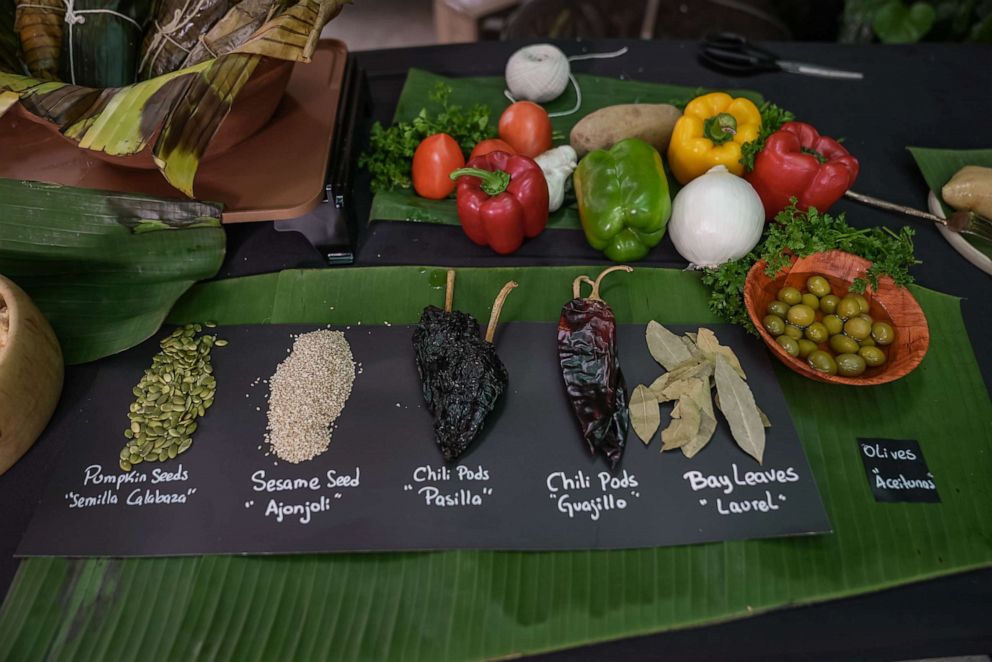 The core ingredients of El Salvadorian cuisine are dried chilis, such as pasilla and guajillo, pumpkin and other small seeds, bay leaves, dried herbs and a variety of fresh vegetables to add flavor in their dishes, she said. "We don't use too much spice, too much heat in our food," Centeno added.

"What makes Salvadorian tamales unique is that we cook it through vapor in a banana leaf" so that the wrapper is malleable to prevent it from breaking once it's folded, she said. "Also our masa is cooked before we put it inside and wrap it with the other ingredients inside like pork, chicken and veggies -- and we steam it so it's really moist, soft and juicy inside."

As for the assembly, Centeno said practice has made perfect. She first adds the masa to the banana leaf, fills it with chicken, slices of bell pepper, potato, olives and sauce in the middle then folds the long sides inward on each short end.

"Once it's in a tamal shape, you grab a piece of twine and wrap it around to hold it together so it doesn't fall apart while it cooks in the steam in the traditional clay pot," she said.

She shared a family secret her grandmother taught her as a girl: Line the bottom of the inside of the pot with the stalks of banana leaves to create a shelf that keeps the bottom layer of tamales from being completely submerged in the water while cooking. 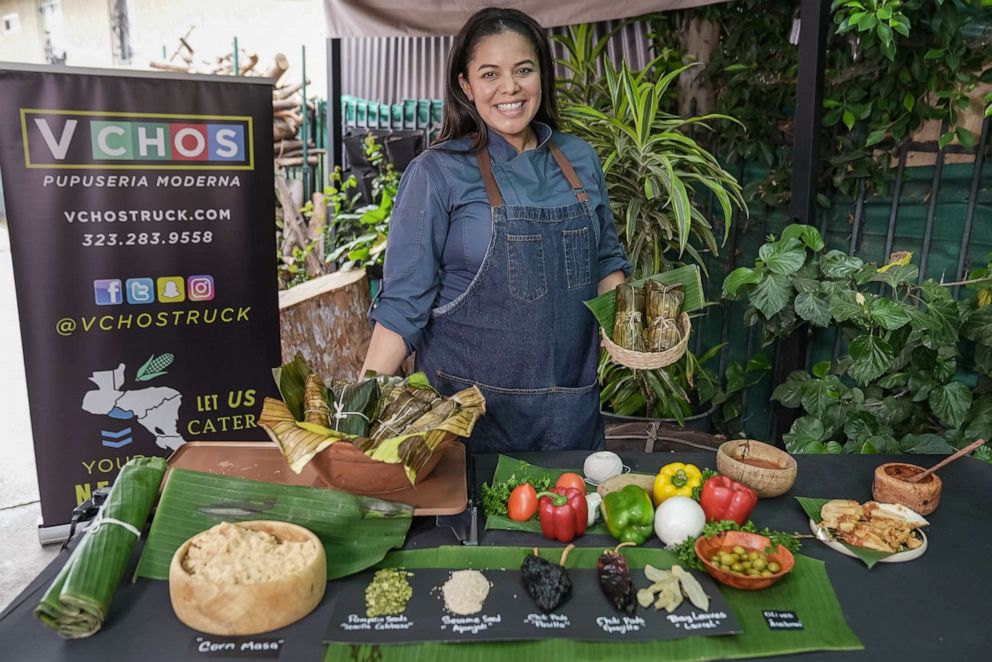 "My grandma always told me to measure water four fingers up from the bottom of the last tamale, because you do [vertical] layers stacking one on top of the other and cook it on the stove over really low medium heat and check the water every 30 to 45 minutes cause they cannot run out of water. The low heat helps it absorb at the top and cook with vapor."

"Within two to three hours of cooking they're ready to eat," Centeno said, adding her family eats their tamales "with a little bit of bread and the extra tomato sauce" -- the same way she enjoyed them during her childhood in El Salvador where local women would "sell tamales out of these big old pots" on the weekend after church and around town. 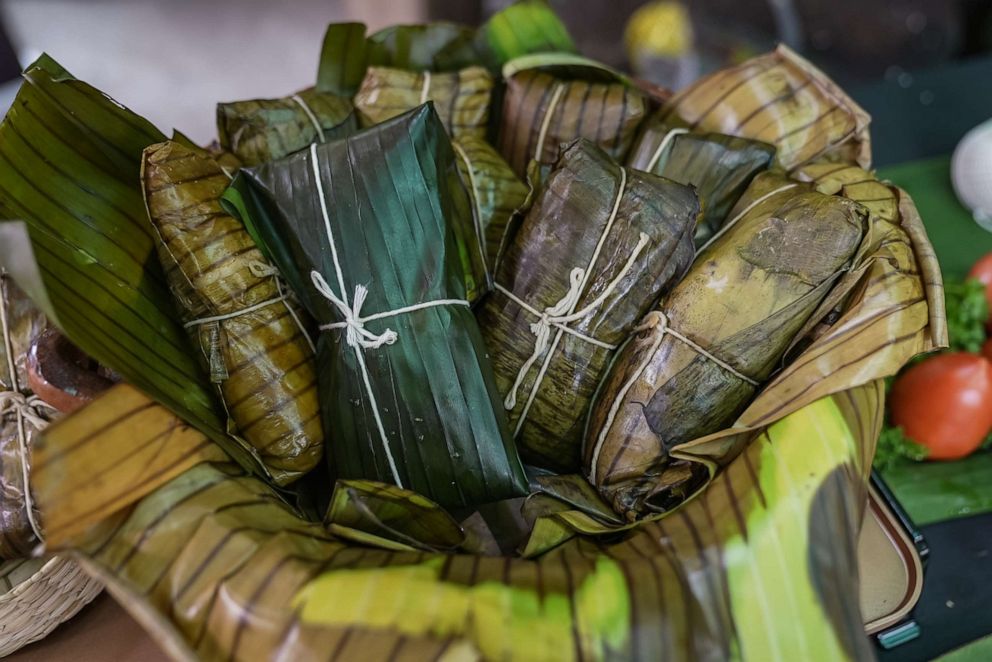 Not your stereotypical Mexican food

Nearly 2,000 miles north of El Salvador, in the state of Guerrero along the northern Pacific Coast of Mexico, the nuanced flavors infused in Irra's family's tamales pay homage to their Afro-Mexican culture. 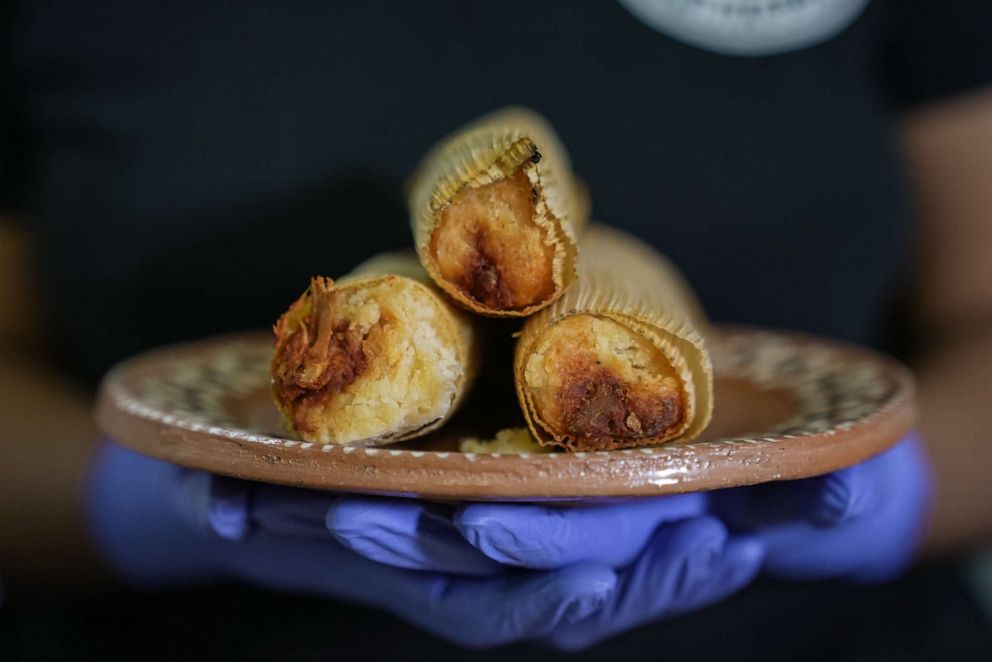 "There's a stigma of what Mexican food is supposed to look like. People say our food doesn't taste like the rest of what they know, like they've had tamales but not like this. So we take the opportunity to let people know the background that we've had for hundreds of years, since the 1600s and first records of the African culture," Irra said. "Different regions have different tastes because of the people who stayed there to live. It's just been entwined into our food or how we look and talk. It's a privilege and amazing to be able to say we're Afro-Mexican."

In addition to the use of corn husks, which Irra said "are more traditional to Mexico as a whole," the flavors that differentiate their regional tamales come down to the use of chilis.

"We use a lot of red chili pods. A lot of our dried chili pods come from over there, because there's kinds you just can't find anywhere else," she said, referring to chile costeño, a moderatly spicy, fruity and smokey red pepper "only grown on the coast of Mexico." 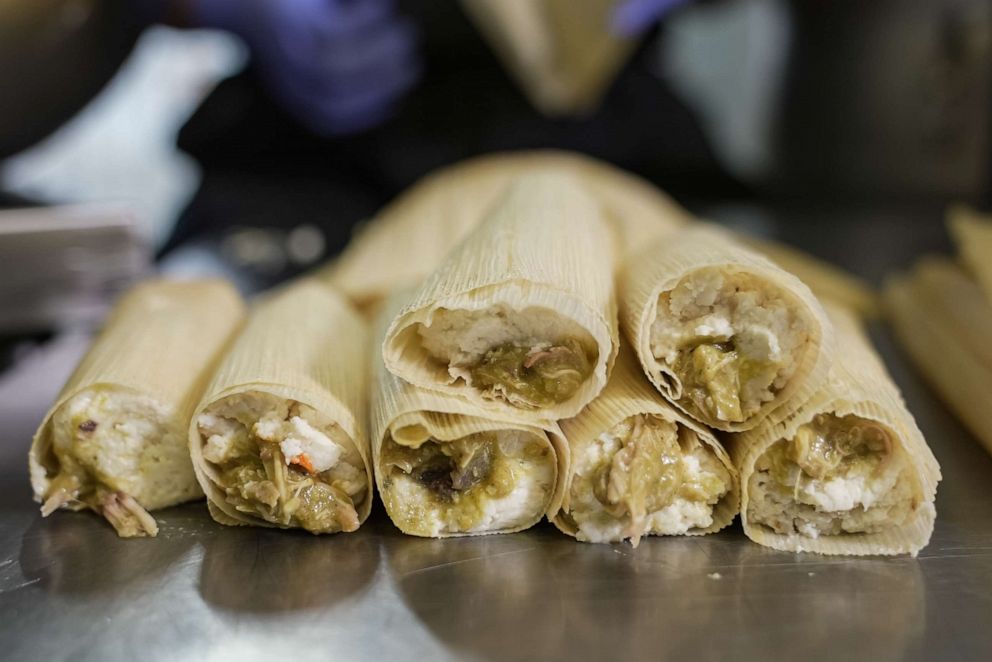 "I've never tried another chile that tasted exactly like that -- it's a taste that transports you back home," Irra said. "Even though the fillings can be very similar, the masa and the protein, the consistency of the tamale is going to change while it's cooking because of the corn husk instead of banana leaves."

No matter which region and style of tamal, the common thread of this Hispanic staple dish that connects each culture is the love and tradition wrapped into each bite.

"At the end of the day, the tamal represents culture, family, union," Irra said.