A Southern California 13-year-old who survived an attack by a great white shark said he is already looking forward to getting back in the ocean.

"Hopefully really, really soon," Keane Webre-Hayes told ABC News on Wednesday. "I definitely want to get back out there." 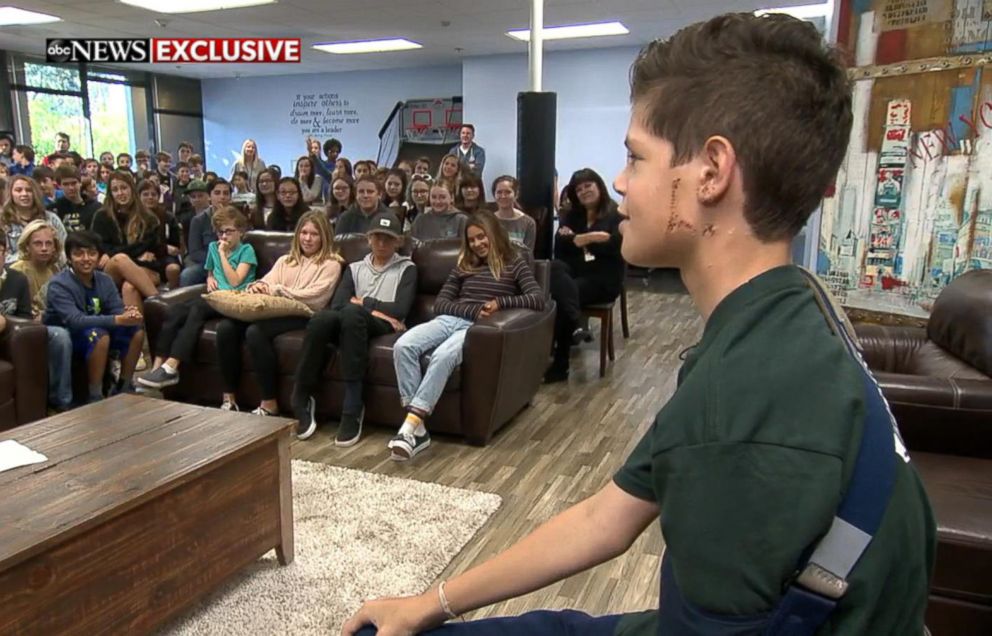 ABC News
Keane Webre-Hayes talked to his classmates about surviving a shark attack after returning to school just two and a half weeks later.

And when he ventures back into the water, "he'll be wrapped in bubble wrap," his mom, Ellie Hayes, joked. 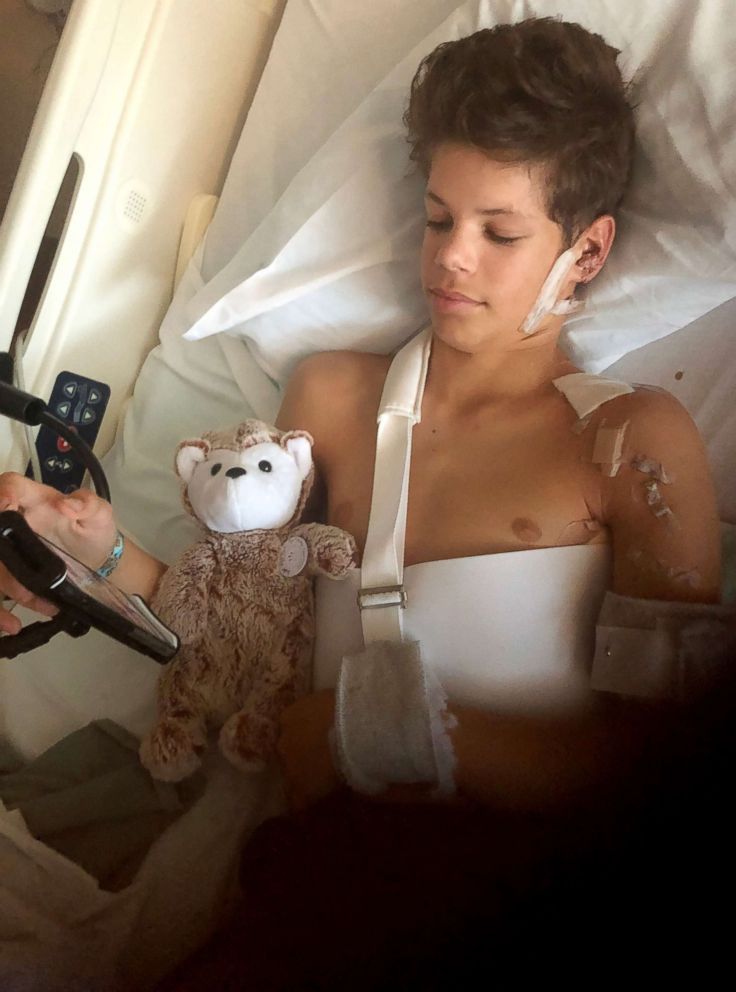 Obtained by ABC News
Keane Webre Hayes in the hospital recovering after a shark bite.

The 13-year-old was diving and fishing for lobsters in water about 9 feet deep off Beacon's Beach north of San Diego on Sept. 29 when he was attacked by the shark, authorities said.

He was rushed to shore by lifeguards and local kayakers, then airlifted to a hospital.

"When I was in the water, I was like, 'It's probably a big fish," and my mind instantly went to 'shark,'" Hayes said.

He also regaled his classmates upon his triumphant return to school Wednesday with his surprising priorities after he was brought safely, though severely injured, to shore.

"The first thing I said when I saw my mom pull up was 'Can you take pictures for Instagram?'" he told his classmates, laughing.

Kayaker Chad Hammel, who helped get Keane to safety, told ABC News it was lucky to get him out of the water when they did.

"Luckily, we got him out of the water because when we got him on the kayak heading in, that's when I looked back and the shark was behind the kayak," Hammel said. 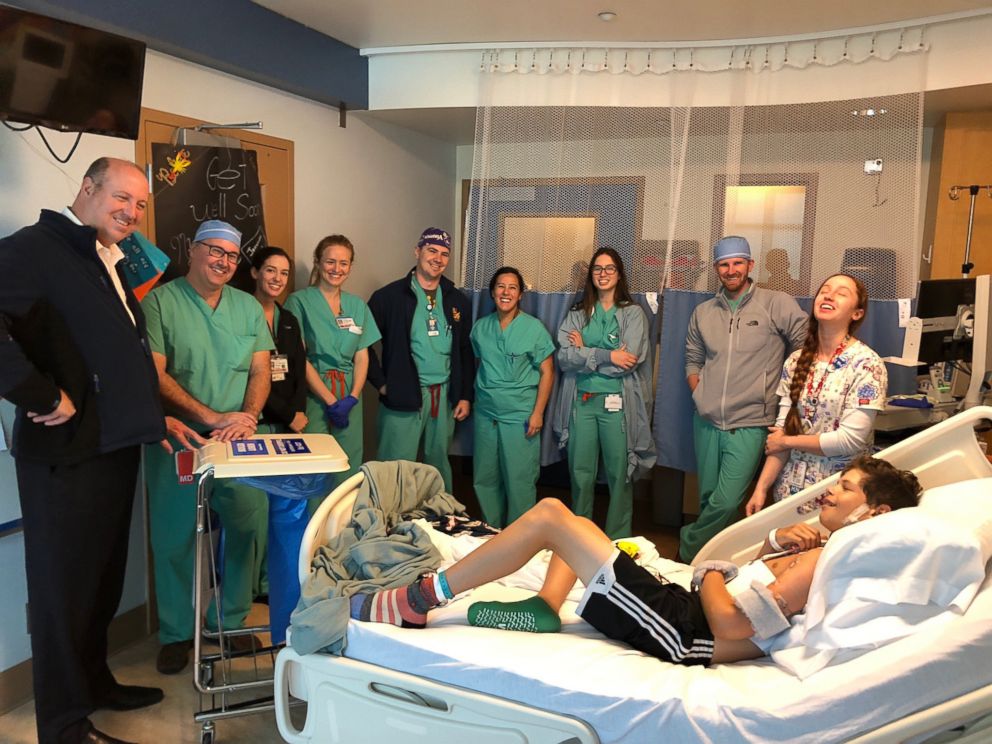 Keane was in critical condition upon arrival at the hospital, and underwent five hours of immediate surgery with Dr. Tim Fairbanks, the hospital's chief of pediatric surgery. Fairbanks said it was "an honor to take care of Keane and his family," but that said the teen still has a long road to full recovery.

"We really got to start with baby steps and build our way up," Fairbanks said. 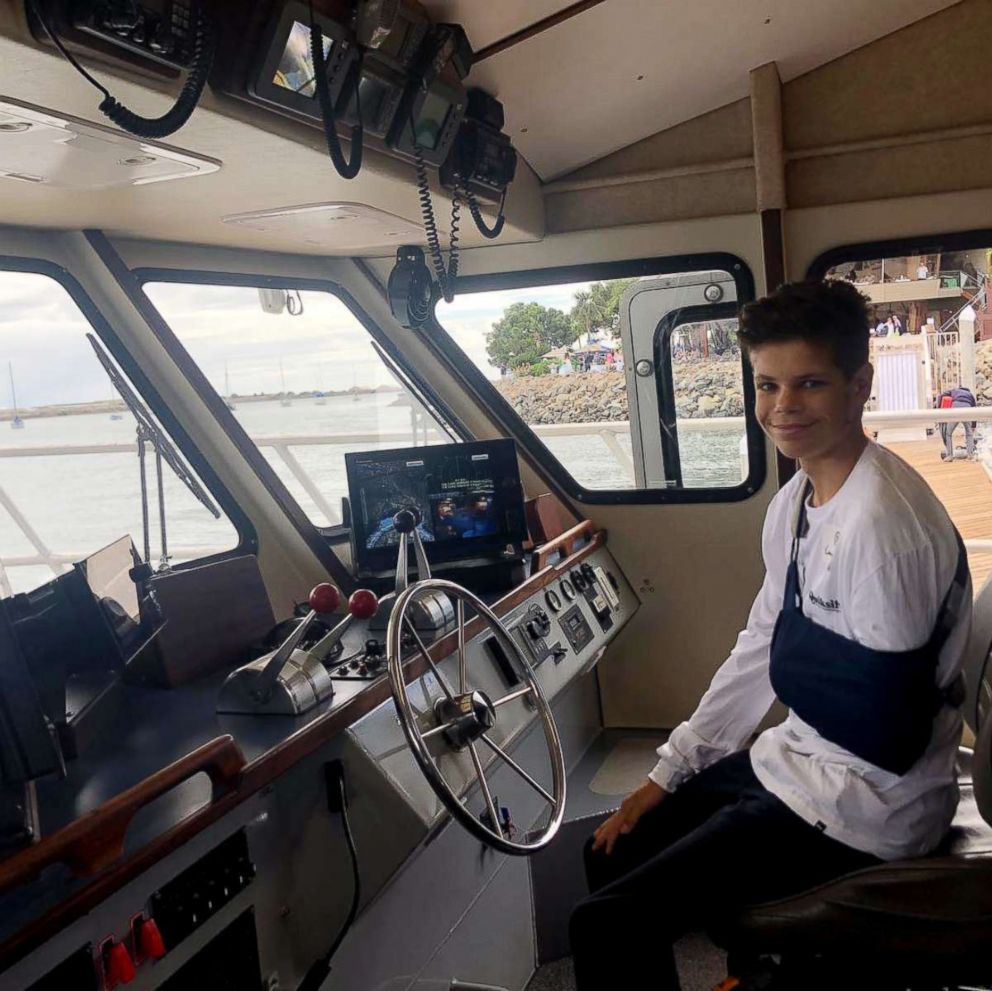 The 13-year-old's return to school Wednesday, just two and half weeks after the attack, was greeted with a standing ovation by classmates. 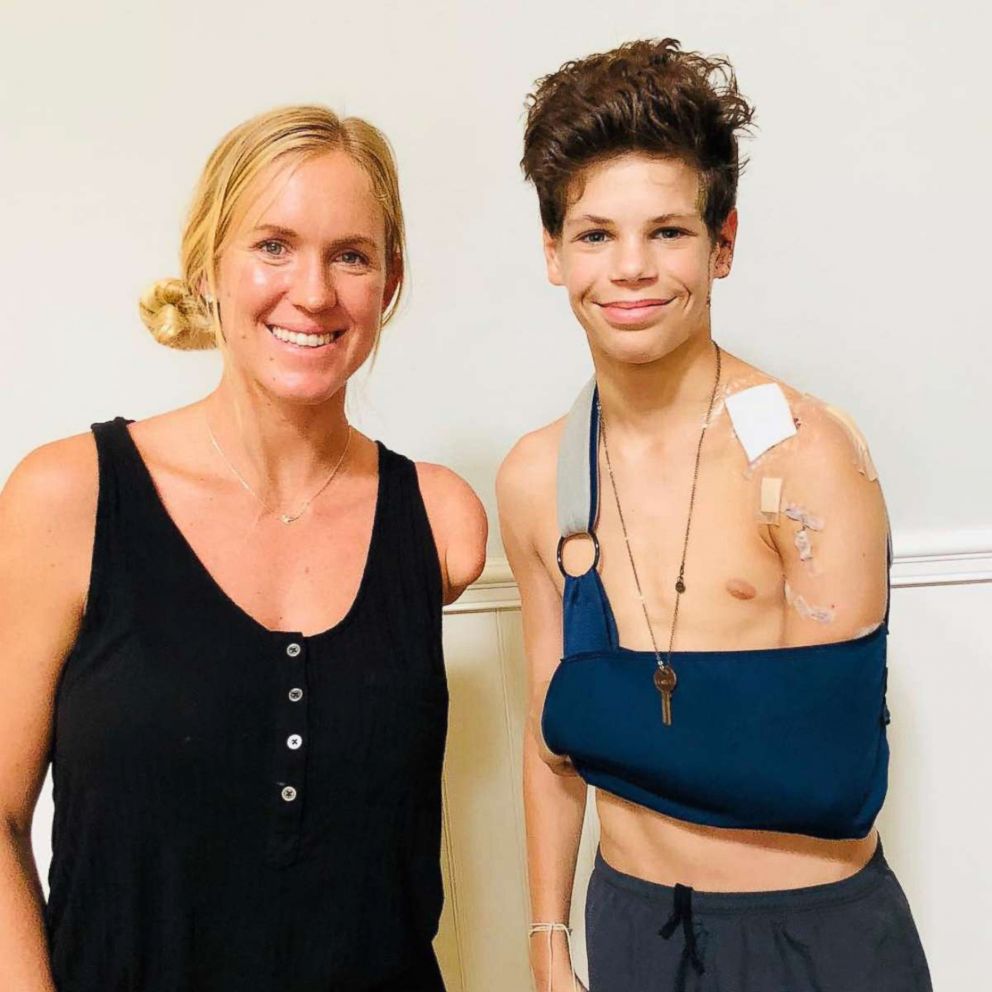 He also stayed in good spirits throughout his speedy recovery in the hospital, which may have been helped by a couple of celebrity visitors. 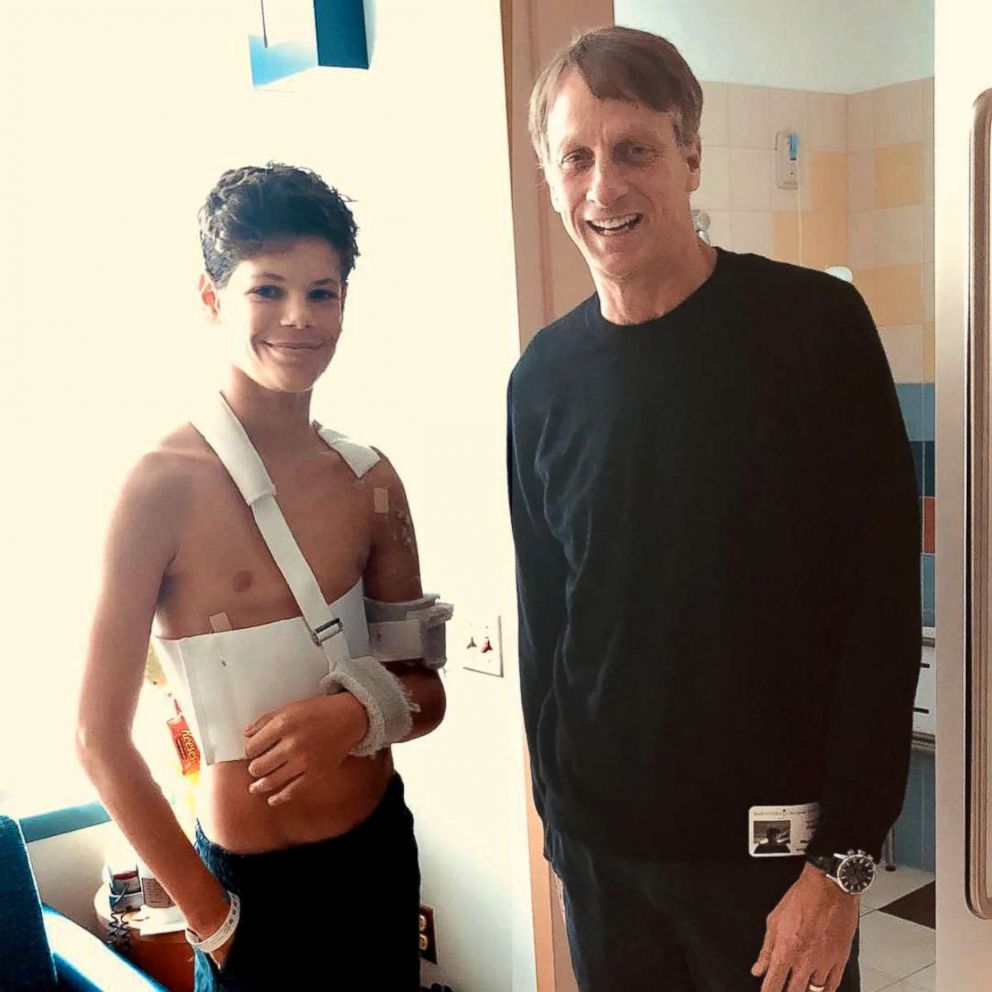 Professional surfer Bethany Hamilton, who survived a 2003 shark attack when her left arm was bitten off and made an incredible comeback to surfing, spent a day with Hayes.

"It was really cool. She showed me how to play pool. So she holds the stick and she hits it with her hip so that was pretty cool," he said. 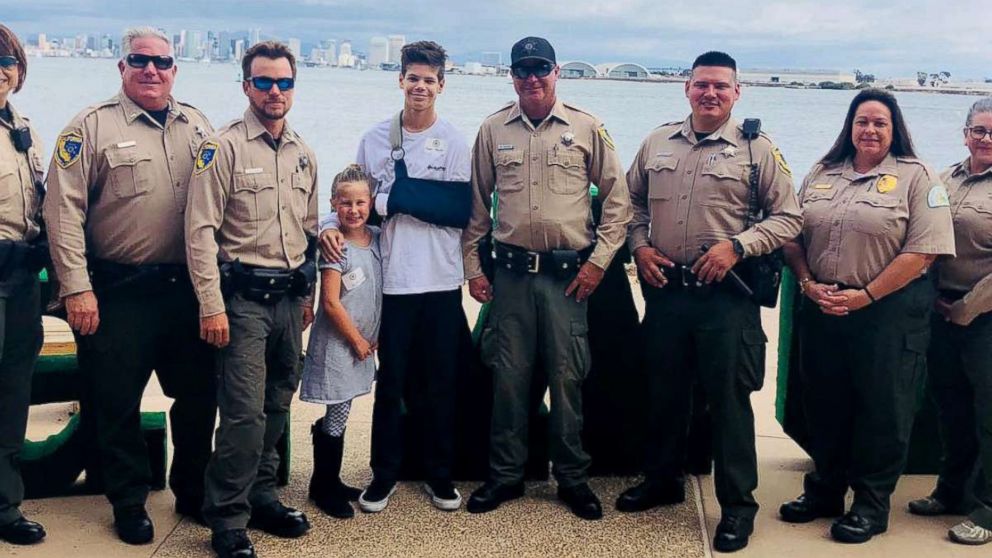 Hayes said he still wants to lobster dive again and thanks to a lifetime fish and game license presented by the California Wildlife Officers Foundation, he can do it anytime he wants.

A close family friend, whose daughter is in Hayes’ class, set up the Keane Hayes Encinitas Shark Attack GoFundMe page to help contribute to the family’s mounting medical bills.