By Kiara Brantley-Jones
Video by Will Linendoll
Share —
Sign up for our newsletters to get GMA delivered to your inbox every morning!

A recent graduate of the University of California, San Diego decided to honor her parents by taking graduation photos in the farm fields where they worked to support her education.

Jennifer Rocha, who graduated from UC San Diego on Saturday, said she wanted to thank her parents for their support by taking graduation photos in the fields where she worked alongside them since high school. The heartfelt tribute was posted on the university’s Facebook page on Wednesday and has since gone viral.

"I wanted to take those pictures out there, specifically in the field, because that's what made me go to college," Rocha told "Good Morning America." "That was my dad's lesson of saying, if you don't pursue a higher education, you're going to be working here the rest of your life." 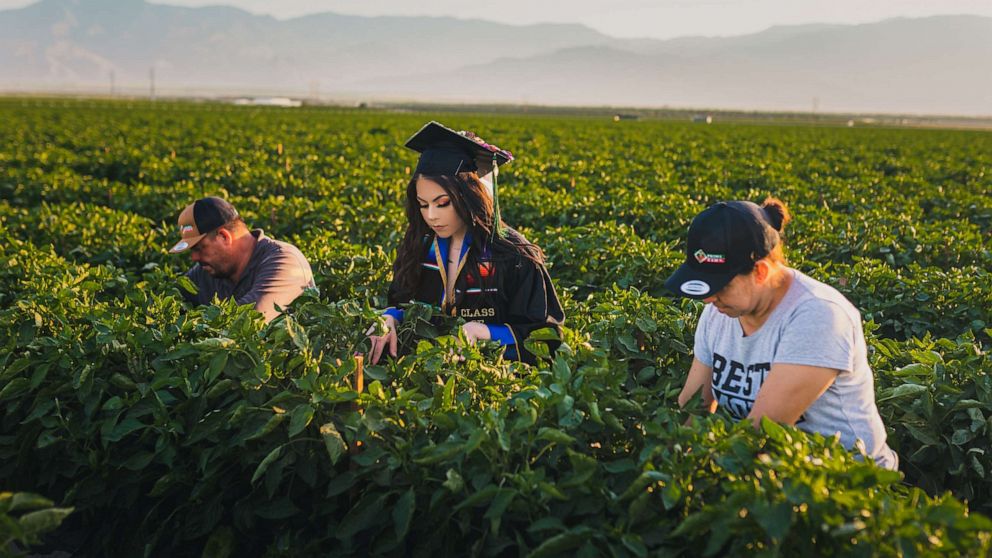 She started working in the fields with her parents when she was a junior in high school. Each day, she would leave cross country practice to go home and work planting strawberries overnight.

"It was tough labor," Rocha said as she remembered working late nights in the fields. "I was like, 'You know what? I don't want to be doing this my whole life.'"

Rocha, raised in Coachella, California, said her parents encouraged her and her siblings to pursue a higher education. Growing up, she looked up to her older sisters as role models, because they both graduated from college and she wanted to "follow their footsteps." 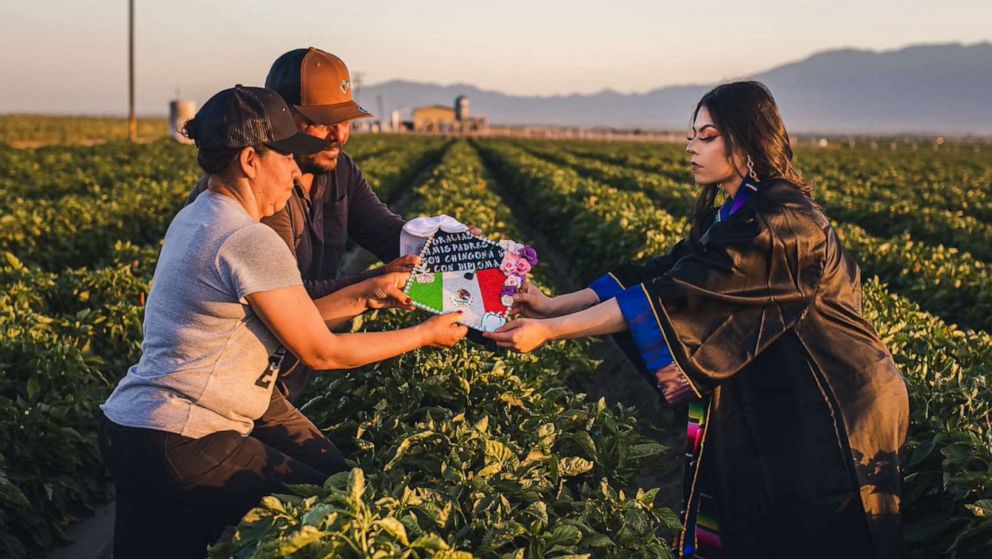 "My dad always told us that his dream was for us to get a college degree," Rocha told "GMA." "My parents have been working as migrant field workers since they were like 6 or 7 years of age. I always saw them providing for us first before them."

Completing the past four years of college was not always an easy feat for Rocha. While being a full-time student, she also worked at the university’s police department to help pay for her tuition. To reduce the financial burden on her parents, she lived in her older sister’s apartment instead of the dorms for all four years and commuted to and from school each day.

The recent graduate said she worked long hours to fund her education. At times, her work shifts wouldn’t end until 4 or 5 a.m., leaving only a few hours to spare before the next class. 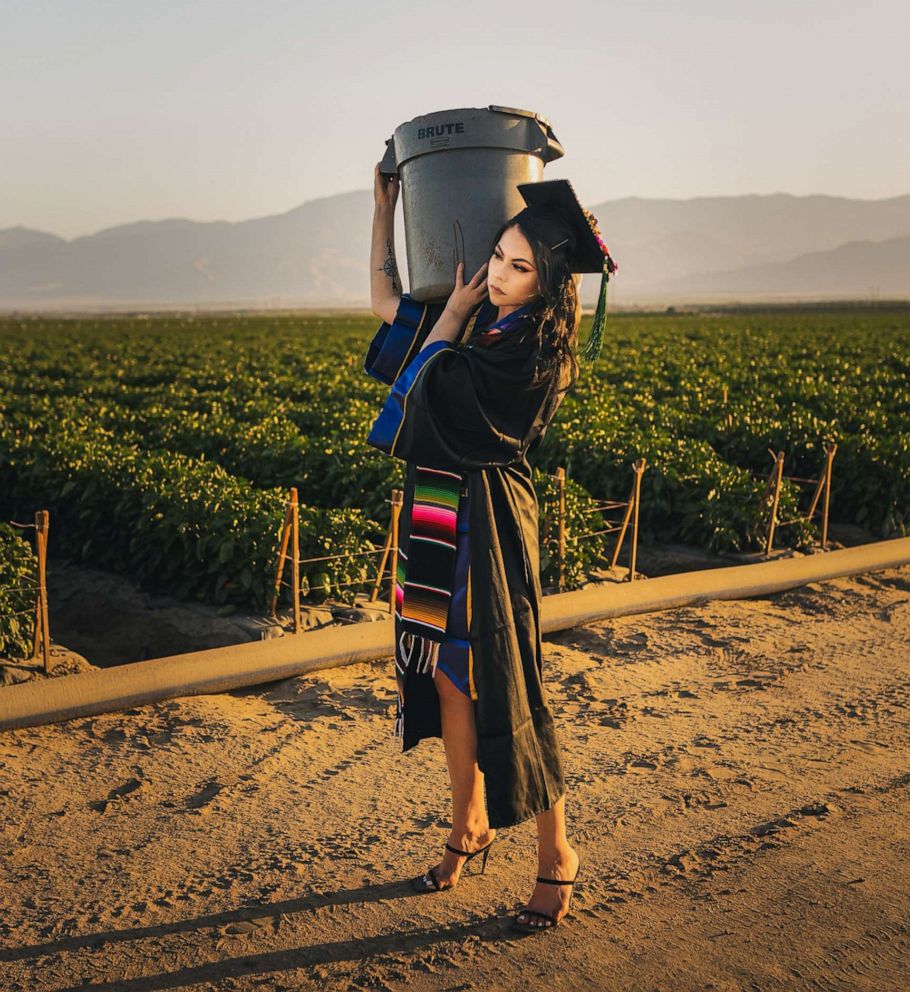 Branden Rodriguez/@branden.shoots
Jennifer Rocha, 21, a new graduate from the University of California San Diego, poses for a graduation photo in the fields where her parents worked to support her education. Rocha worked in the fields with her parents when she was in high-school.

"I have class at like 8 a.m., and it's not worth me driving and then coming back," Rocha said. "So, I would just nap in my car and then go to class after that."

"It was tough times, but I mean, we got that diploma," she added.

Rocha, 21, earned a degree in sociology with an emphasis in law and society. She said she will use her education to pursue a career in law enforcement.

Her goal is to increase Latino representation in the field and "help take the criminals off the streets, those that are actual criminals," she said.

"Being the first one in my family to do law enforcement, that just brings like a whole other level of pride for [my parents]," she added. 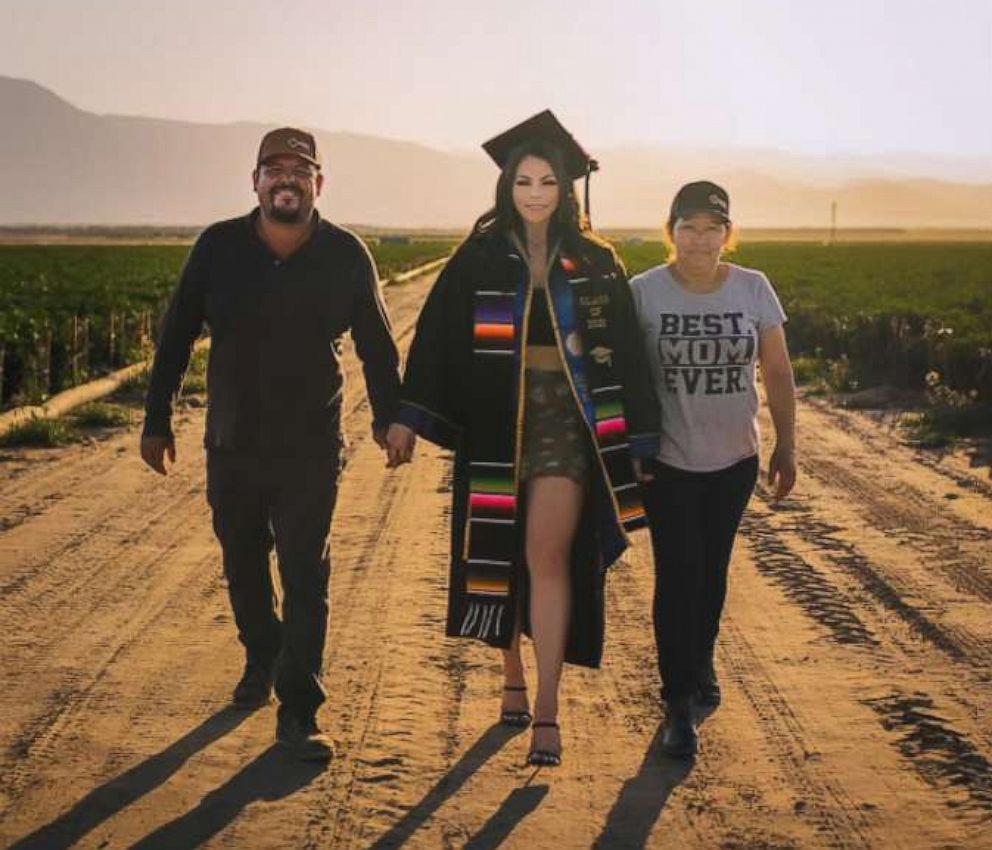 Rocha hopes her photos and her story will be an inspiration to immigrant families.

She said it was important to include her parents in her graduation photos because, “I wanted to not just honor them but honor all the migrant skilled workers, because a lot of times they aren't recognized and we forget about them.”

“My parents being migrant workers were able to have three girls get their college education, and you can do it, too, and your kids can,” she said.