A South Carolina school bus driver who kept his cool during an armed hijacking hailed all 18 children the real heroes of the high-pressure encounter.

Kenneth Corbin spoke exclusively to "Good Morning America" Monday about how he was able to hold off the gunman and what the students said to the man that helped keep them safe for six minutes.

"The kids were the ones that actually got the gentleman off of the bus and they pretty much had my back as much as my concerns were with them," Corbin explained. "At the end when they started questioning him, it seemed to have frustrated him because his main objective were to get to the next town, but I think we were only on the road about four miles and he just got frustrated with the questions and just told me to stop the bus and get off. All y'all get off now."

Police believe Jovan Collazo, the 23-year-old trainee from New Jersey in his third week at Fort Jackson, appeared to be trying to get home. He remains in custody facing two dozen charges, including 19 counts of kidnapping.

"As we were traveling, I guess he realized there were several students on the bus -- kind of scattered throughout," Corbin said. "He decided to move all the students up front so he could keep us all in close proximity, and when he did that, especially some of my kindergarteners, they started asking questions." 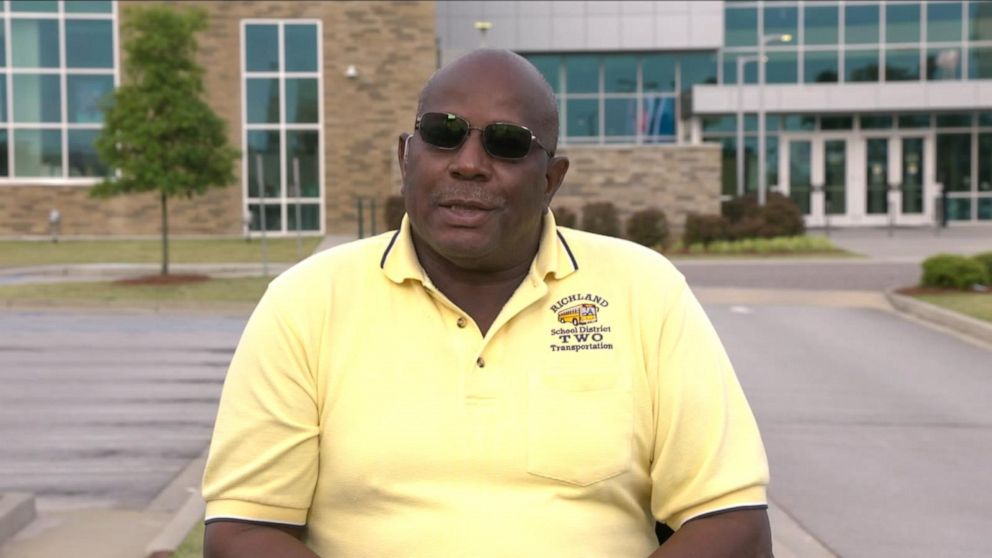 The students, according to Corbin, asked if the man was a soldier to which he "hesitantly answered -- 'yes.'"

"They asked him, 'why are you doing this?' He never did have an answer for this one. They asked, was he going to hurt them? He said 'no.' They asked, 'are you going to hurt our bus driver?' He said, 'no. I'm going to put you off the bus,'" Corbin recalled. "He sensed more questions coming and I guess something clicked in his mind and he said, 'enough is enough already,' and he told me to 'stop the bus, and just get off.'"

Corbin, who was trained to handle a hostage situation, said he initially pushed his hands out to signify to the man that he was not allowed on the bus.

"I had to tell him that twice, and when I told him that, that's when he presented his weapon and told me to close the door and move and drive," Corbin said."It was just a matter of staying calm and following his instructions and thinking about the kids, because I didn't want to do anything that would, you know, rile him to cause him to do something that would bring harm to the kids."

Corbin said the man's "main objective was to get to the next town" and repeatedly asked the driver how long it would take, how much further, etc.

"He told me to speed up and don't let the red light catch me," Corbin said, "that's when he moved the kids up front and then he wanted to know, again, 'how far,' and all I could say was '20 miles because we haven't gone that far.'"

At that point Corbin told Collazo they would have to go to Kershaw County to get to another town, but only made it four miles when "the kids got him frustrated" and they all got off the bus.

Corbin said "it was so evident that they were precious cargo and I pretty much just had to just do whatever -- to get them off the bus safe and sound."

"It seemed like they were going to do the same thing by me, and that's why I refer to them as my heroes," the bus driver said.