A high school senior in Texas has set a goal of collecting 1,000 bags to be donated to kids in foster care in the month of May, National Foster Care Month, so kids do not have to carry their belongings in garbage bags.

Hunter Beaton, 18, of Boerne, Texas, has three adopted siblings who first came to his family’s home while they were in foster care. When Beaton saw their belongings arrive in garbage bags, as often happens in the foster care system, he vowed to change that.

“I remember being a kid and thinking, ‘Why don’t these kids have some kind of stability? Why do they have trash bags?’” Beaton told “Good Morning America.” “I always had that idea in my head of, ‘Why can’t they just get a bag? That’s cheap enough.’”

When Beaton got older he made good on his pledge by using his Boy Scouts’ Eagle Scout project to donate 100 bags to kids in foster care through a local nonprofit organization.

After learning that six of the bags had been given away in just one month, Beaton said he realized he needed to do more. He reached out to a local bag manufacturing company that supplies bags for the military and they gave him a supply of surplus bags for $1 each.

From there, he created his own program, Hunter’s Day 1 Bags, and traveled throughout Texas to share his idea with the local child welfare boards that help supervise and support the work done by the state’s Child Protective Services (CPS).

“You’re going into a new place, you don’t know these people and you’re going to be living with them and you’re coming in with a trash bag containing maybe one pair of shoes and some clothes and maybe a trinket if you’re a young kid or a phone if you’re older,” Beaton said. “My belongings don’t matter is what it’s telling people.”

Since his Eagle Scout project, more than 27,000 bags have been given to kids in foster care in Texas and surrounding states, according to Beaton.

Hunter Beaton
Hunter Beaton's programs also gives bags to people who have aged out of the foster care system.

Now, more often than not, when a child is picked up by CPS in Texas, they are given one of Hunter's Day 1 bags and then taken to a Rainbow Room, a place where they can fill the bag with donated supplies like clothes that they then take to their foster home, according to Tim Allen, president of the Texas Council of Child Welfare Boards.

"The bags were a big deal for us," said Allen, who said the practice of using trash bags in Texas was because of a sense of immediacy and lack of supplies. "When we got the bags we started thinking outside of the box. Now we have campaigns to fill the bags and it's been a snowball effect."

(MORE: Couple adopts 7 siblings together: 'They didn't need to lose each other'

There are currently more than 400,000 children in foster care in the U.S., according to the most recent federal data.

In Texas, where Allen says there are around 40,000 children in foster care, most kids can be moved around two to three times before they settle into a home. That means they can now carry their Day 1 Bags with them wherever they go.

"The bags make the kids feel as normal as possible. Trash bags were the opposite of normal," Allen said. "Hunter gave us the vision of what it was like firsthand in these homes, the kids' fears."

Beaton partnered with a larger charity, One Simple Wish, that grants wishes for kids impacted by foster care, abuse and neglect. Through the partnership, Hunter's bags each carry a One Simple Wish card so the child in foster care who gets the bag can have a wish granted. 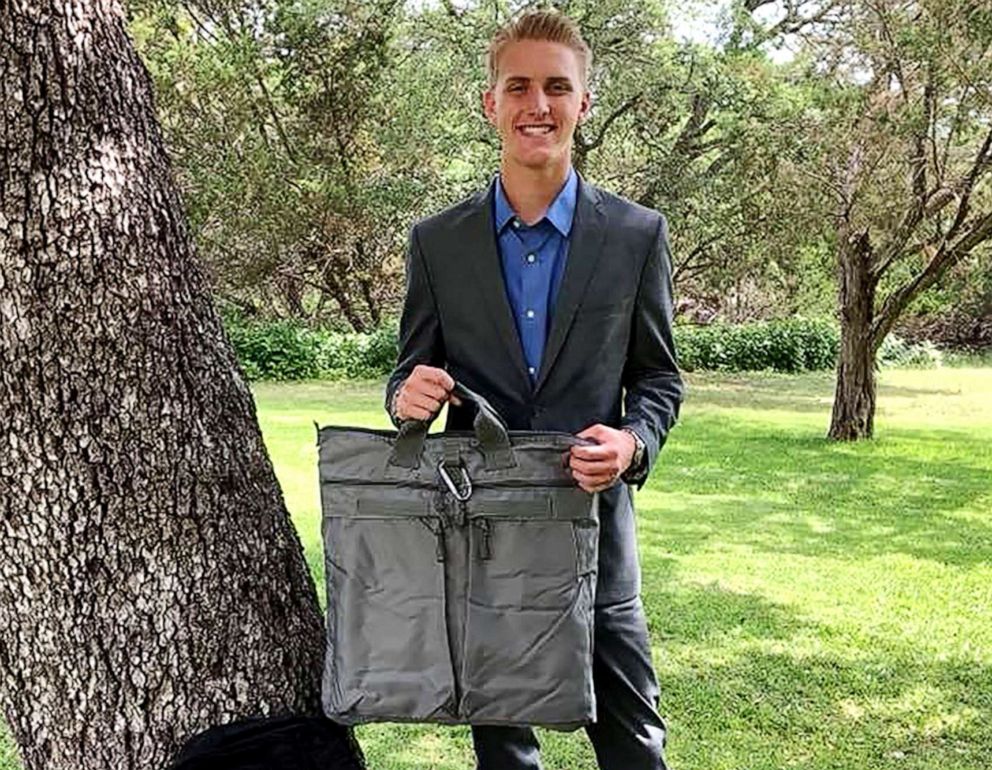 The bags often also come filled with a gift card to a place like McDonald's so the child and the CPS officer can stop there for a sense of normalcy after a removal, according to both Beaton and Allen.

"Hunter had that vision of being first-hand involved with his siblings and seeing the importance of normalcy and what we could do to make the situation more normal," Allen said. "These bags are the catalyst do that, they help make it as normal as possible for any child."

Beaton plans to attend the University of Texas at Austin in the fall. As a high school senior, he decided he wanted to set a major goal -- collecting 1,000 bags in May -- before graduation.

"Giving kids some kind of dignity is the most important thing," he said. "Hopefully by giving them something tangible that they feel more confident about that can give them a head start on feeling like their life has purpose and is worth more than what a trash bag is telling them."