Actor Alec Baldwin told ABC News' George Stephanopoulos in an exclusive interview that he had "no idea" how a live bullet got onto the set of his film, "Rust," but that he "didn't pull the trigger" on the firearm that killed one person and wounded another.

Alec Baldwin: Unscripted
Actor Alec Baldwin sits down in his first interview since the fatal accident on the set of the movie "Rust".

"I would never point a gun at anyone and pull the trigger at them, never," Baldwin told Stephanopoulos in a first look at the upcoming interview, which is produced by George Stephanopoulos Productions. It will air Thursday at 8 p.m. ET on ABC and streaming on Hulu.

"Someone put a live bullet in a gun, a bullet that wasn't even supposed to be on the property," he added.

On Oct. 21, Baldwin was holding an antique revolver during a dress rehearsal for the Western at the Bonanza Creek Ranch near Santa Fe, New Mexico, when it discharged, killing the film's cinematographer, Halyna Hutchins, and wounding its director, Joel Souza.

In the exclusive ABC News interview, Baldwin, who was starring in and co-produced the film, talked about what happened on set that fateful day, saying he had no reason to suspect a live bullet could be in the prop gun. He also talked with Stephanopoulos about Hutchins, 42, who was struck in the chest and died after being airlifted to a hospital. 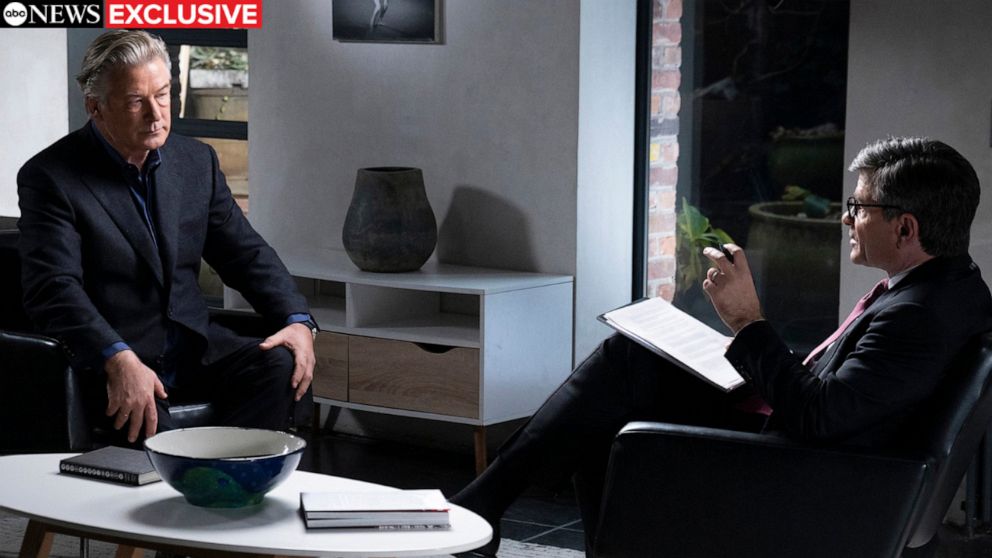 ABC News
Actor Alec Baldwin talks to ABC News' Chief Anchor George Stephanopoulos in his first interview since the deadly shooting on the set of the film, "Rust."

On Tuesday, Santa Fe County Sheriff's Office issued a new search warrant detailing that investigators may have found the source of the live bullet fired by Baldwin on the "Rust" set.

Next week, a two-hour “20/20” delves into the events ahead of the deadly shooting on the set of “Rust” and the pending investigations into what went wrong, featuring the Baldwin interview and new interviews. “20/20” airs Friday, Dec. 10 (9:01–11:00 p.m. EST), on ABC and streaming next day on Hulu.