President Joe Biden, speaking to the nation Tuesday, gave his fiercest defense yet of his self-imposed deadline to withdraw the U.S. military from Afghanistan -- a day after the last troops left the country, bringing America's longest war to a close -- but only after a chaotic and deadly exit.

ABC News Special
This special dives into the chaotic events of recent weeks, from the U.S. moving personnel out of its embassy to the desperate Afghans who clung to planes in hopes of fleeing the country.

"Let me be clear, leaving August the 31st, is not due to an arbitrary deadline. It was designed to save American lives," a defiant Biden said, responding to harsh criticism both of his decision to leave and how it was handled.

After praising what he called the "extraordinary success" U.S. troops had in conducting the rushed and dangerous evacuation, he bluntly blamed both the Afghan army and the Afghan government for collapsing so quickly and the Trump administration for making a deal with the Taliban, that he said he inherited, that would have withdrawn all ground troops by May 1. 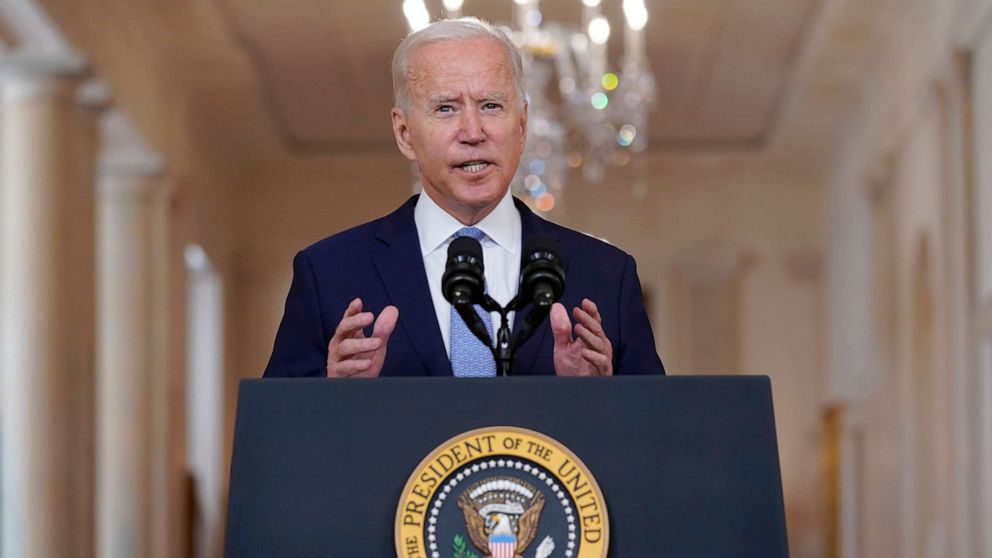 Evan Vucci/AP
President Joe Biden speaks about the end of the war in Afghanistan from the State Dining Room of the White House, Aug. 31, 2021, in Washington.

"So, we were left with a simple decision. Either follow through on the commitment made by the last administration and leave Afghanistan or say we weren't leaving and commit to another tens of thousands more troops going back to war," he claimed. "That was the choice, the real choice. Between leaving or escalating. I was not going to extend this forever war. And I was not extending a forever exit."

His voice rising in anger at times, Biden continued, "It was time to be honest with the American people again. We no longer had a clear purpose in an open-ended mission in Afghanistan. After 20 years of war in Afghanistan, I refuse to send another generation of America's sons and daughters to fight a war that should've ended long ago."

The president's prepared remarks from the State Dining Room of the White House came 24 hours after the last military plane cleared airspace above Afghanistan but without more than 100 Americans on board who still wanted to get out of the country, something Republicans and other critics have blasted as "leaving Americans behind." 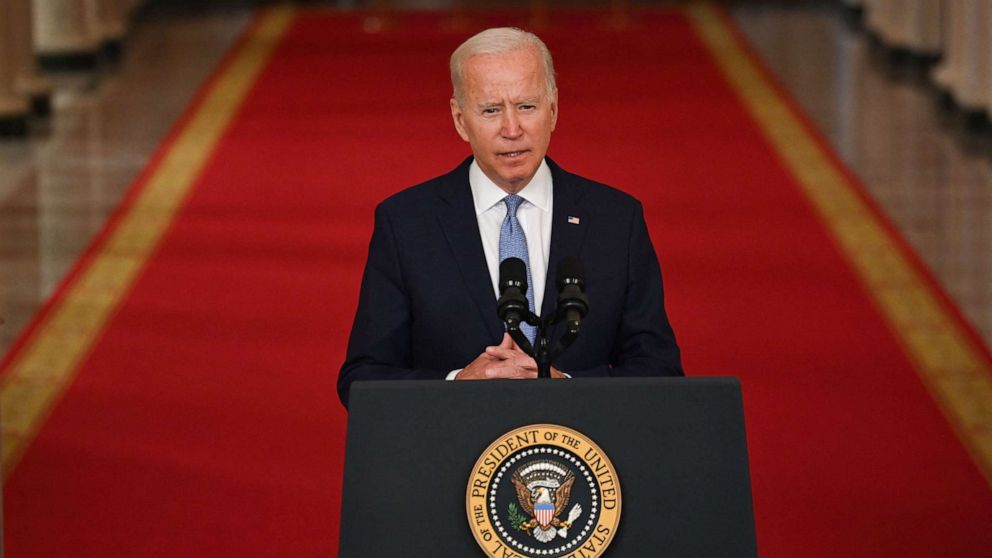 Brendan Smialowski/AFP via Getty Images
President Joe Biden speaks on ending the war in Afghanistan in the State Dining Room at the White House in Washington, Aug. 31, 2021.

Biden downplayed that part of the foreign policy crisis, saying the U.S. had reached out to the remaining Americans 19 times.

"The bottom line, 90% of Americans in Afghanistan who wanted to leave were able to leave. And for those remaining Americans, there is no deadline. We remain committed to get them out if they want to come out," Biden said, without detailing out how that could happen.

Biden had told ABC News' George Stephanopolous in an exclusive interview on Aug. 18, "If there's American citizens left, we're gonna stay to get them all out."

Ahead of his remarks, Senate Minority Leader Mitch McConnell joined a chorus of Republican lawmakers criticizing the president for what he called a "reckless withdrawal" that "created a humanitarian disaster and emboldened the terrorists."

“Two weeks ago, President Biden specifically promised he wouldn’t pull out before every American who wanted out had gotten out. By their own admission, the Biden Administration has now broken that promise," McConnell said. 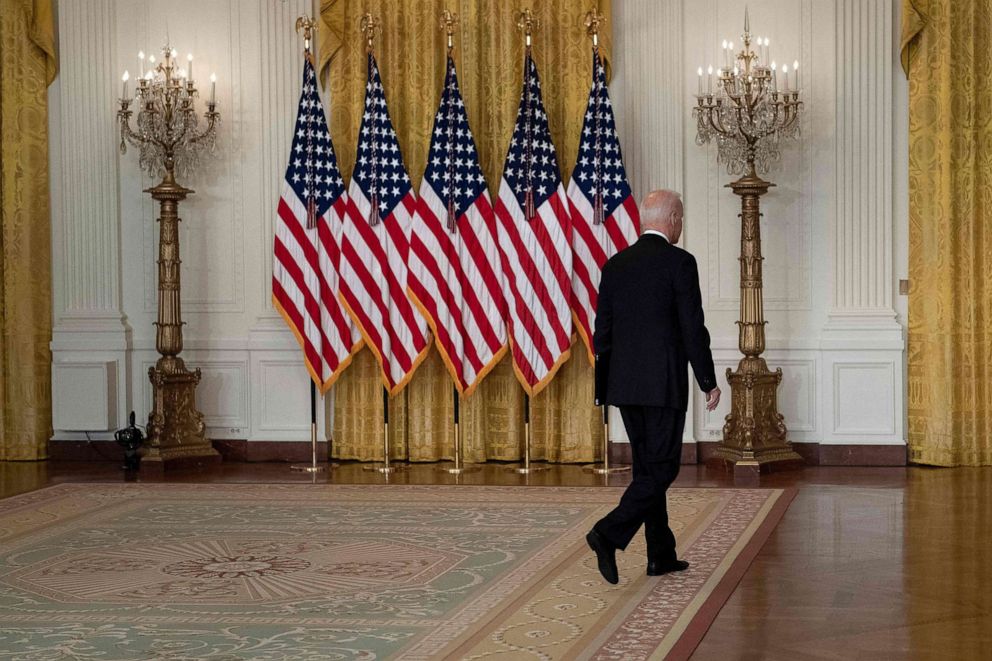 Brendan Smialowski/AFP via Getty Images
President Joe Biden leaves after speaking about the Taliban's takeover of Afghanistan from the East Room of the White House, Aug. 16, 2021, in Washington.

On Tuesday, Biden said that when he made the decision in April to end the war and set the Aug. 31 deadline, U.S. officials had assumed that the more than 300,000 Afghan national security forces that they had trained over the past two decades would stand up to a Taliban takeover.

"That assumption, that the Afghan government would be able to hold on for a period of time beyond military drawdown, turned out not to be accurate," Biden said. “But I still instructed our national security team to prepare for every eventuality. Even that one. And that's what we did."

MORE: Taliban pose threat to Afghan cultural heritage as they sweep back into power

He denied that the problems that have marred the past week in Afghanistan could have been avoided. 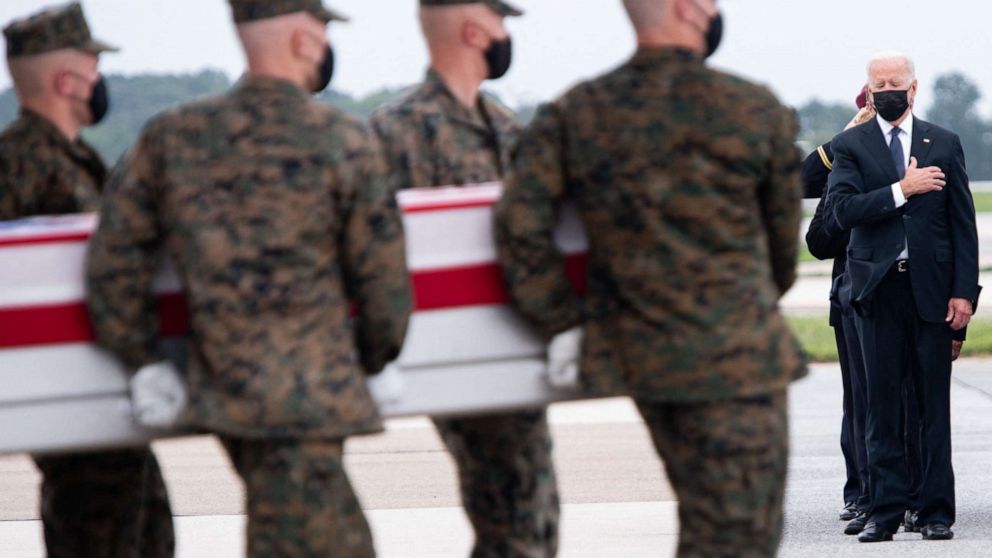 Saul Loeb/AFP via Getty Images
President Joe Biden, right, attends the dignified transfer of the remains of a fallen service members at Dover Air Force Base, Aug. 29, 2021, in Dover, Delaware.

"The decision to end the military lift operation at Kabul airport was based on unanimous recommendation of my civilian and military advisers," he said.

"I take responsibility for the decision. Now some say we should have started mass evacuations sooner, and couldn't this have been done -- been done in a more orderly manner? I respectfully disagree," he said. "The bottom line is, there is no evacuation from the end of a war that you can run without the kinds of complexities, challenges, threats we faced. None."

Biden also used the national spotlight to fire back at critics who say the U.S. could have maintained a limited military presence.

“Those asking for the third decade of war in Afghanistan, I ask, what is the vital national interest?” Biden said. "The fundamental obligation of a president in my opinion is to defend and protect America. Not against threats of 2001 but against the threats of 2021 and tomorrow."

Pres. Biden: “We succeeded in what we set out to do in Afghanistan over a decade ago. Then we stayed for another decade. It was time to end this war.” https://t.co/TQIuZzC8oG pic.twitter.com/uu2YDmXKTa

"My fellow Americans, the war in Afghanistan is now over. I'm the fourth president that must face the issue of whether and when to end this war. When I was running for president, I made a commitment to the American people that I would end this war. Today I've honored that commitment," he said.

With the military and diplomatic withdrawal now complete as the U.S. approaches 20 years since the Sept. 11 attacks, the Taliban has again taken over the country, including the Kabul airport, the site of an often-desperate evacuation effort the past two weeks. Shots were fired into the air to celebrate the withdrawal in Kabul on Monday night. 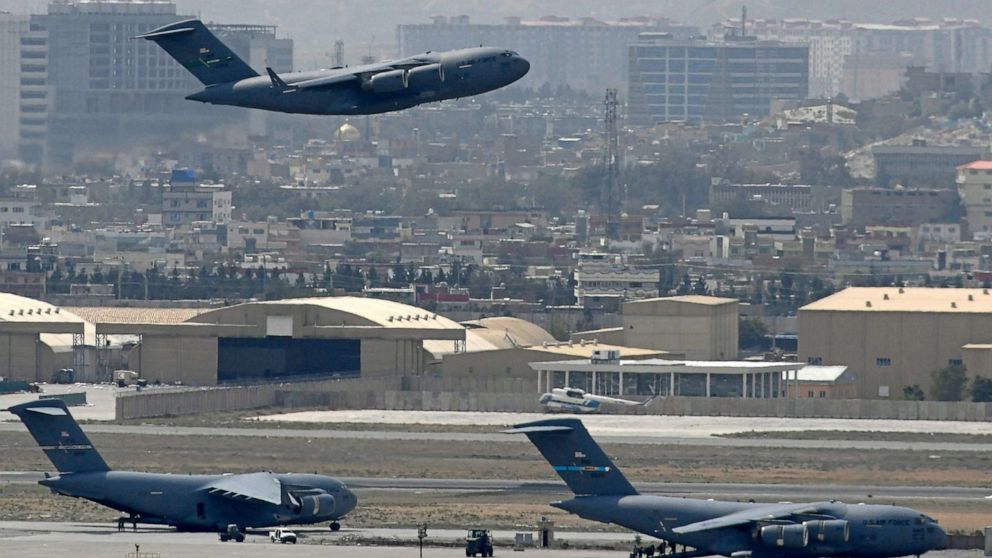 Aamir Qureshi/AFP via Getty Images
A U.S. Air Force aircraft takes off from the airport in Kabul, AFghanistan, on Aug. 30, 2021.

The Pentagon said that 2,461 troops were lost in the war, which started as it began: under Taliban rule. Since the evacuation mission began, 6,000 citizens and more than 123,000 people -- Afghans "friends and allies" -- were airlifted out by the U.S. and partners, but alarms are being raised over those left behind.

MORE: US troops will stay until all Americans are out of Afghanistan, even if past Aug. 31 deadline: Biden to ABC News

The president's poll numbers, too, showed uncommon cross-partisan agreement among Americans that withdrawing all U.S. troops by Biden's deadline could be a grave mistake, according to an ABC/Ipsos poll conducted after Thursday's suicide attack in Kabul which killed 13 service members and wounded 20. The survey found the percentage of Americans who think U.S. troops should stay until all Americans are out of Afghanistan is 86% among Democrats, 87% among Republicans and 86% among Independents.

"I give you my word with all of my heart," Biden said Tuesday, delivering his message to Americans. "I believe this is the right decision, a wise decision, and the best decision for America."