Whitney Wolfe Herd, the CEO of female-focused dating app Bumble, made history Thursday and she did it with her young son at her side.

Wolfe Herd, 31, became the youngest female CEO to take a company public in the United States.

With shares of Bumble soaring nearly 70% in its trading debut, Wolfe Herd also became the world's youngest self-made female billionaire, according to Forbes.

When Wolfe Herd pressed the button to take the company she founded public on Nasdaq, she did so while holding her 1-year-old son, Bobby Lee "Bo" Herd II.

Bumble shared a photo of the moment on Instagram alongside the caption, "This is what leadership looks like."

Wolfe Herd founded Bumble in 2014 after an acrimonious split from Tinder, a dating app she also co-founded.

Alongside a female-driven management team, Wolfe Herd has focused the Austin-based company on a female empowerment message since its inception. The dating app stands out for letting women "make the first move," one of the company's slogans. 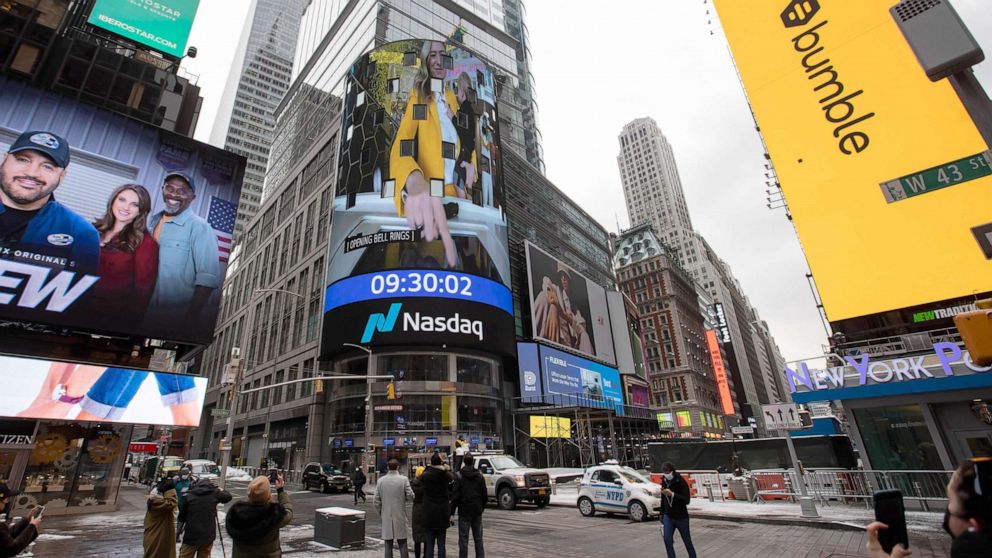 Bloomberg via Getty Images
A monitor displays Whitney Wolfe Herd, chief executive officer of Bumble Inc., ringing the opening bell during Bumble Inc.'s initial public offering (IPO) in front of the Nasdaq Market Site in New York, Feb. 11, 2021. Bumble Inc., the dating app where women make the first move, is targeting to raise as much as $1.8 billion from its U.S. initial public offering after boosting the size of the deal.

On the app, women have to initiate conversation after matching with a prospective partner.

Wolfe Herd tweeted a message of thanks to women on the app as the company went public.

"This is only possible thanks to the more than 1.7 billion first moves made by brave women on our app — and the pioneering women who paved the way for us in the business world," she wrote. "Thank you."

Today, @Bumble becomes a public company. This is only possible thanks to the more than 1.7 billion first moves made by brave women on our app — and the pioneering women who paved the way for us in the business world. To everyone who made today possible: Thank you. #BumbleIPO 💛🐝 pic.twitter.com/OMLNGNvECB

Self-made women account for less than 5% of the world's 500 biggest fortunes, according to the Bloomberg Billionaires Index.

In addition to Bumble, just two of the more than 500 companies that have gone public in the U.S. in the past year were founded by women, according to Bloomberg.

Bumble's board comprises 73% women and its management team comprises 54% women, according to the company's SEC filings.

MORE: These apps aim to make networking easier for women