Warming temperatures across the globe are changing landscapes and threatening local cities and communities.

A devastating break of a glacier in the Himalayas on Feb. 7 left dozens dead and more than 100 missing after it smashed into multiple dams, collecting debris and energy as it made its way down the flank before slamming into two hydroelectric plants in northern India.

While it's difficult to attribute the cause of the collapse on climate change alone, rising temperatures will undoubtedly create more of these types of events in the future, experts told ABC News.

"With the accelerated warming that is happening in the Himalayas, and the rapid response of glaciers across the Himalayas ... the probability for hazards does go up, Summer Rupper, a glaciologist at the University of Utah, told ABC News. 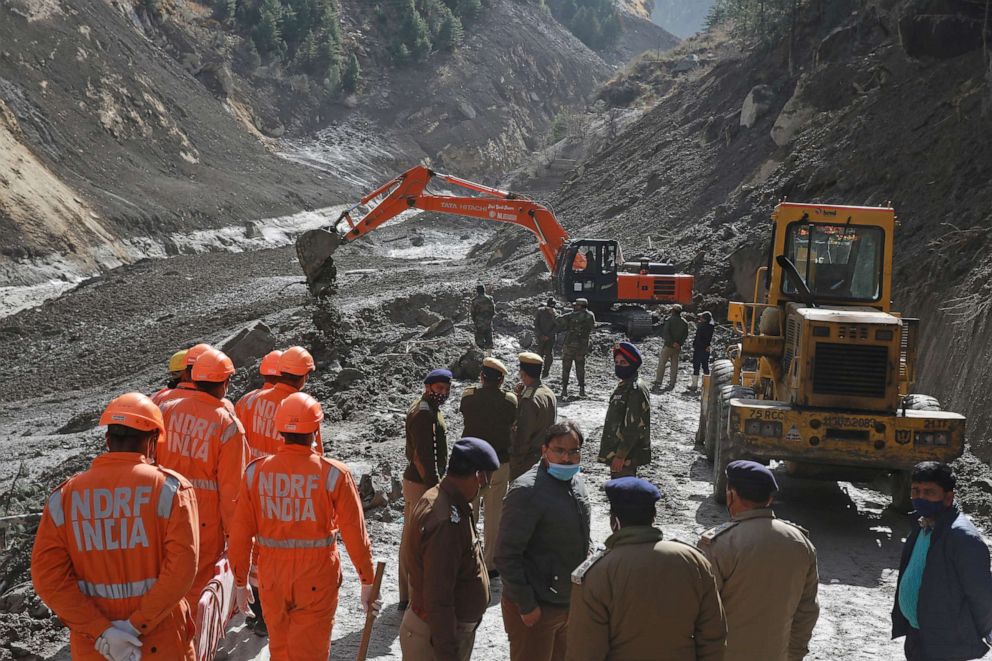 It is still unclear what caused the dam to break

Scientists are still trying to figure out exactly what caused the glacier to break on Feb. 7. At first, a glacial lake outburst was blamed. Although satellite imagery soon disproved that theory, there is potential for glacier outbursts to increase in number and time as temperatures increasingly cause them to thin and retreat, Joerg Schaefer, a climate scientist at Columbia University's Lamont Doherty Earth Observatory, told ABC News.

Schaefer hypothesized that some kind of mechanism triggered a landslide and that the resulting water pressure eventually burst the dam, causing the mass to plunge down the "extremely steep" flank.

Schaefer described the mass as a "water monster" that made the event even more hazardous.

Hazards experts in the Himalayas have feared that these type of disastrous events would come to fruition. A calamitous glacier event has been a "huge conversation" within the hazards community, Rupper said, and experts have been warning the Indian government since 2014 of the potential of landslides and avalanches, The Associated Press reported.

There is concern that there wasn't adequate monitoring or early warning systems in the valley, especially with multiple hydropower plant projects that were all damaged, Rupper said. And the potential for another landslide is currently there, as a glacial lake is currently forming behind a landslide in the valley where the accident occurred, she added. 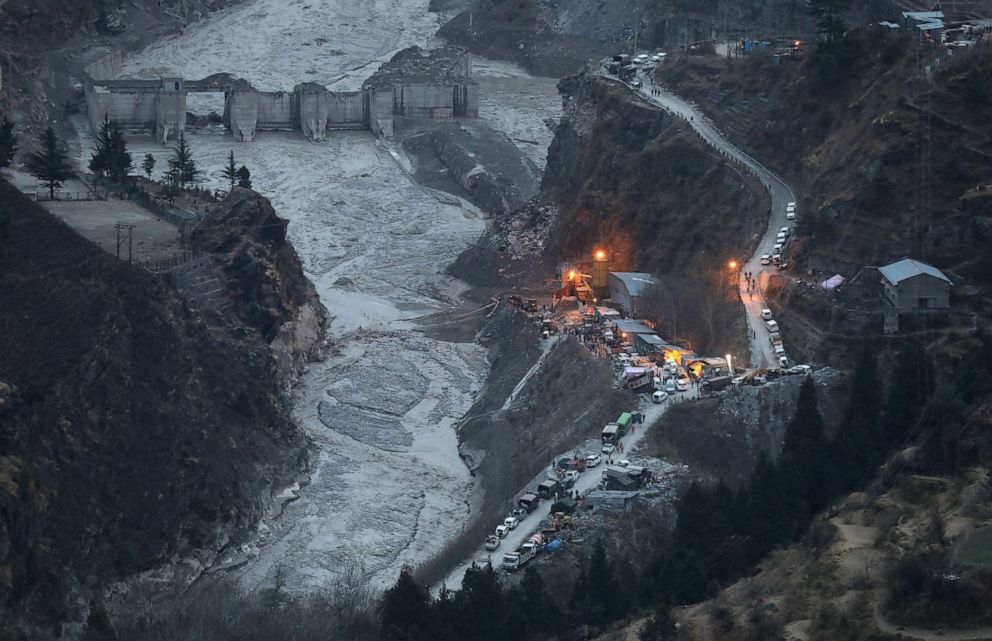 Another type of glacial event that can occur as temperatures warm is the potential for the ice masses to drape across varied topography, including steep landscapes that result in hanging glaciers that are especially prone to breaking off and causing ice avalanches, Rupper added.

In addition, the melting of glaciers is a considerable contributor to sea level rise, on par with melting ice sheets, which can cause catastrophic events for coastal areas all over the world.

Glaciers across the Himalayas have experienced significant ice loss over the past 40 years, with the average rate of ice loss doubling in the 21st century compared to the end of the 20th century, according to a study published in Science Advances in 2019, which Rupper and Schaefer co-authored.

The Himalayan glaciers are retreating "very homogeneously and accelerating their retreat," Schaefer said, adding that the "single culprit" is warming temperatures. 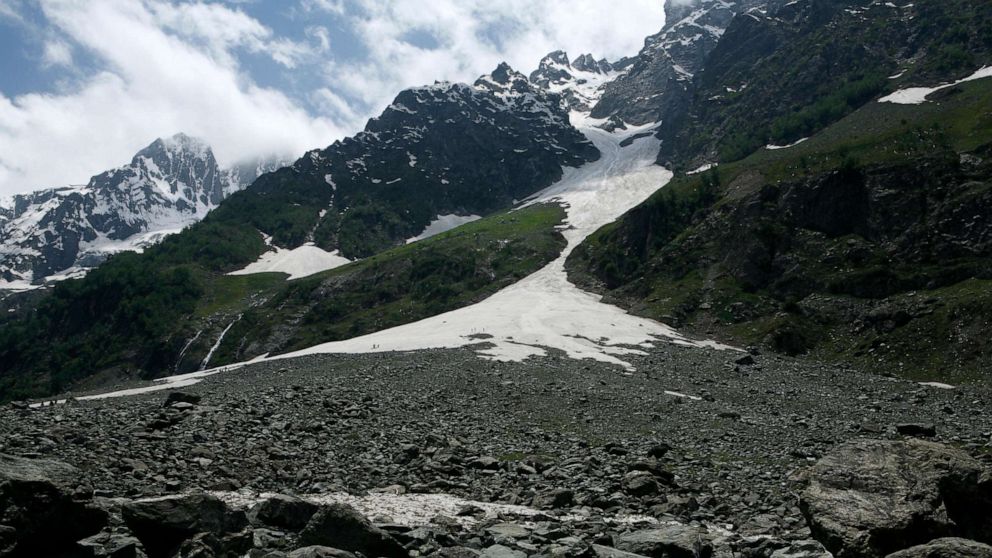 Yawar Nazir/Getty Images, FILE
In this June 25, 2010, file photo, a receding glacier on in Sonamarg, Kashmir, India, is shown.

"It's a very disturbing finding because it means that if you're not asking what happens to the glacier tomorrow, but what happens with the glacier in 10, 15 years, it will follow the temperature curve, which keeps getting warmer," he said.

The shrinking of the Himalayan glaciers, which contribute to local water resources, poses several challenges for neighboring societies, researchers say. The glaciers also feed the hydro plants and they will stop providing meltwater as they shrink, Shaefer said.

For mountaineers who spend their lives dreaming of climbing the Himalayas and other sought-after destinations around the world, climate change means they may not get there in time.

Cory Richards, a National Geographic photographer who has been climbing for 35 years, told ABC News that he's seen "massive observable shifts" in the deflation and disruption in glaciers around the world.

"So what that means for us as an industry is yet to be seen," he said. "Certainly, there are routes on specific mountains that will be altered as glaciers start to become less predictable."

One of the places where this is most evident is on the Khumbu Icefall, a passage on the Nepalese side of Mount Everest where ice is constantly falling from the head of the Khumbu glacier, Richards said.

"As temperatures rise, the calving of big ice cliffs and the collapsing of ice features in the Khumbu Icefall will accelerate, there's no doubt about that," he added, describing it as a "tumultuous piece of glacier." 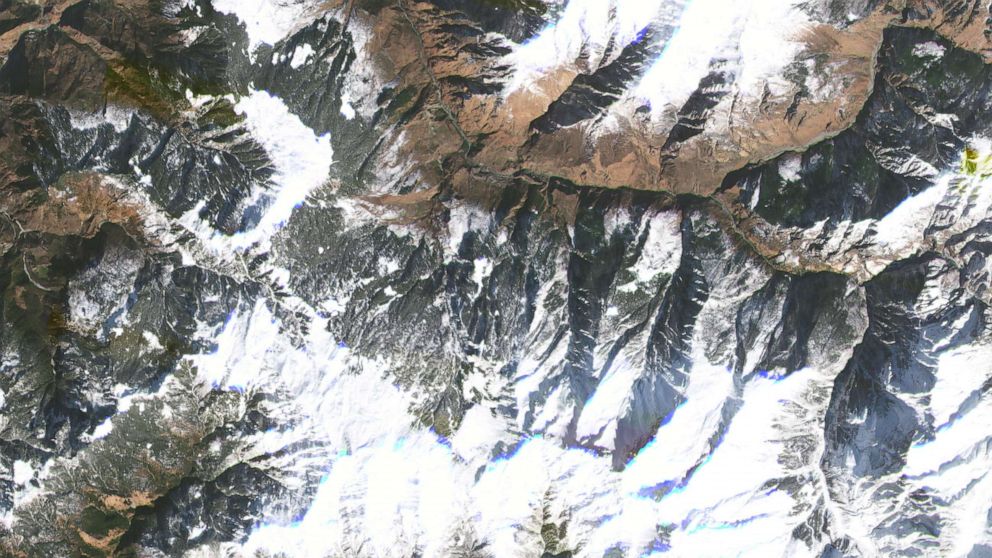 In addition, if the glacier dam that sits near the Khumbu Valley floods or breaks, it will flood the entire valley downstream, endangering the lives of the residents.

The warming also poses a risk for classic trade routes, such as on the south side of Mount Everest. It will be difficult for guided companies to ensure people will be able to climb safely, Richards said.

For at least 20 years, people in the climbing industry have said, "I don't know how much longer this is gonna be climbable," according to Richards.

"Now, we seem to find ways to do those things, continually," he added. "But that's not to say that it is safe or smart."