It’s hard to fully capture the significance of Dolly Parton, whether it’s her impact on country music, her ascent as a woman through a male-dominated music industry or her vast philanthropic efforts.

Best to let Ms. Parton say it herself.

"I used to wonder what my life might be like when I was older, and when I looked back on my life, what it would be like," she continued. "It feels good that I have been able to see so many dreams come true." 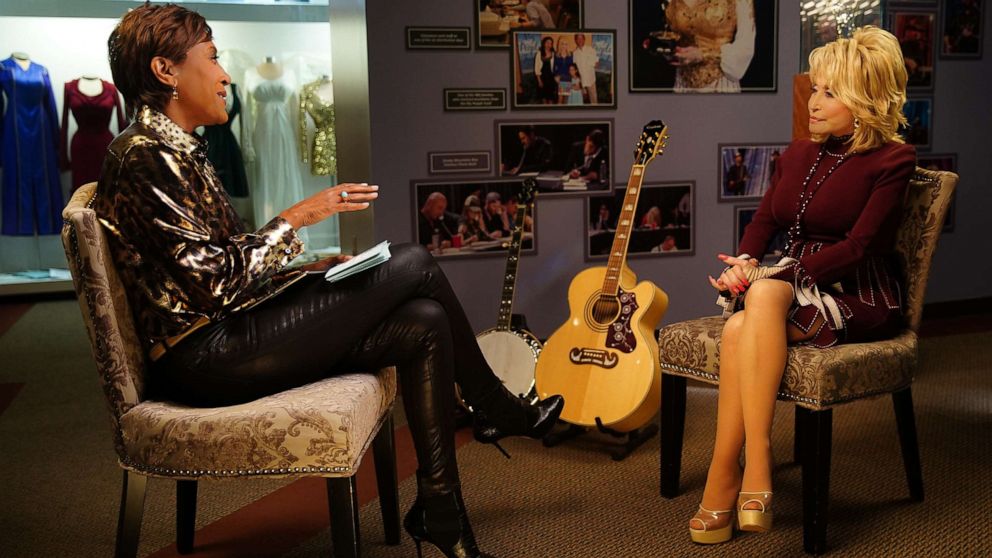 Most of Parton’s fans know the story of her rise from a hardscrabble upbringing in the foothills of east Tennessee’s Great Smokey Mountains to her becoming the living legend with the megawatt personality she is today.

A storyteller at heart, Parton shares pieces of herself, her family, her journey and the plight of others in her music. “My Tennessee Mountain Home,” “Jolene,” “I Will Always Love You” and “9 to 5” are just some of her major hits spanning a five decade-plus career.

Even Parton, now 73, doesn’t know how many songs she’s written. 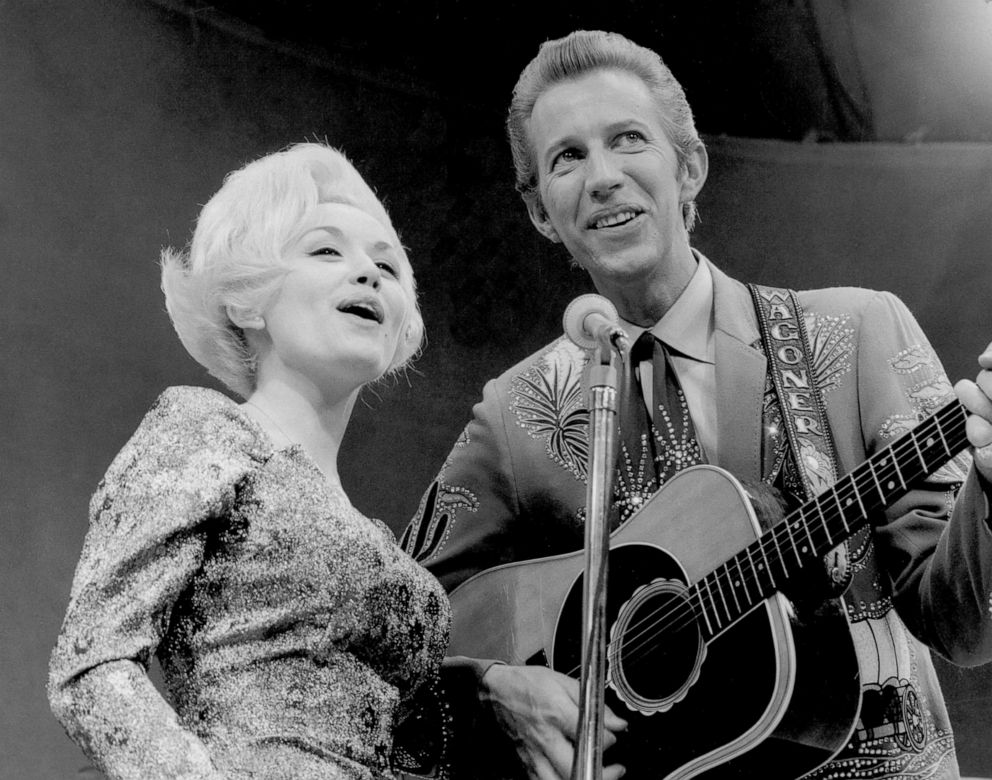 “Everything was music to me… if someone was hammering on the other hill at the sawmill, I’d start writing a song with that rhythm,” she added. “I still write [songs]. I still have to have my yellow legal pads and my cassette player, and I have to order them off eBay.”

0:45
During an interview with Robin Roberts at the Dollywood Chasing Rainbows museum, Parton said she has to order her cassette tapes off eBay for her songwriting.

Sadness is a major theme in Parton’s music. On WNYC host Jad Abumrad's podcast, “Dolly Parton’s America," she revealed that she went through a rough time in her 30s when she dealt with weight gain and “some family things.” Parton said she even contemplated writing a last letter during her struggle with depression.

“I don't think people can live in this world without going through times like that,” Parton said. “People always look at me, they always say, 'Oh, you just always seem to be so happy.' I said, 'that's the Botox.' No, but seriously, I'm a very sensitive person. I feel everything to the core.”

It was during that time in the 1980s, she told Roberts, that she'd had "a complete breakdown."

“I could totally relate to how people do get on drugs or alcohol, how people do commit suicide, because when you're a tender, loving, caring, sensitive person, you feel like you can only stand so much heartache and sorrow,” Parton added. 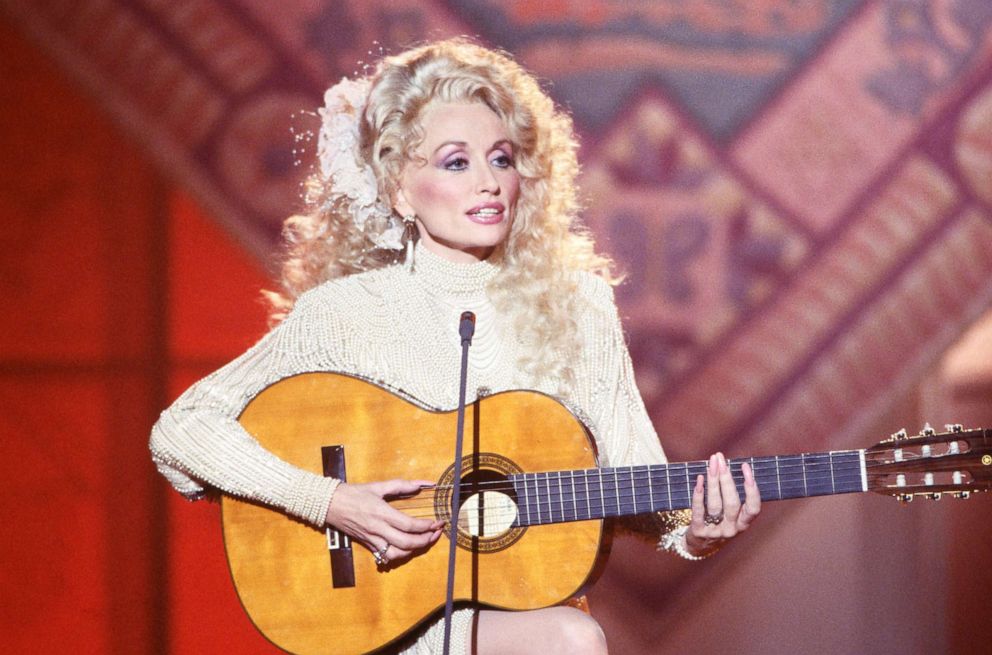 Parton’s family’s support and her Christian faith pulled her through it, she says.

Among those by Parton’s side the longest has been Carl Dean, her husband of 53 years.

Parton said she met Dean outside a laundromat, and they wed in 1966 as Parton’s career was starting to accelerate. She said the two eloped in Ringgold, Georgia, just over the Tennessee line, so their wedding “wouldn't be in the Tennessee papers.” Parton’s mother made her white dress.

The two have been together ever since, although Dean is rarely seen in public. Dean, who worked in asphalt paving, likes to work on his tractors, and wants to be kept out of the spotlight, Parton said.

“He likes the privacy,” Parton said. “He wants me to do my thing and let me [let him] do his.”

Though she doesn’t call herself a feminist, many of Parton’s songs have become anthems for women. Her first hit was 1967’s “Dumb Blonde” in which she warned, “This dumb blonde ain’t no fool.” She starred alongside Jane Fonda in the 1980 movie “9 to 5,” based on her No. 1 song of the same name, and has hinted that a sequel is in the works.

"[That movie] did a lot of good, but evidently didn't do enough good because we're going to always have the same problems in the workplace with women and men," Parton said. "I still believe that women should get paid equal and should be treated with respect. I'm all about that. And like I say, I don't get out and have to preach it or march in the streets. I write about it." 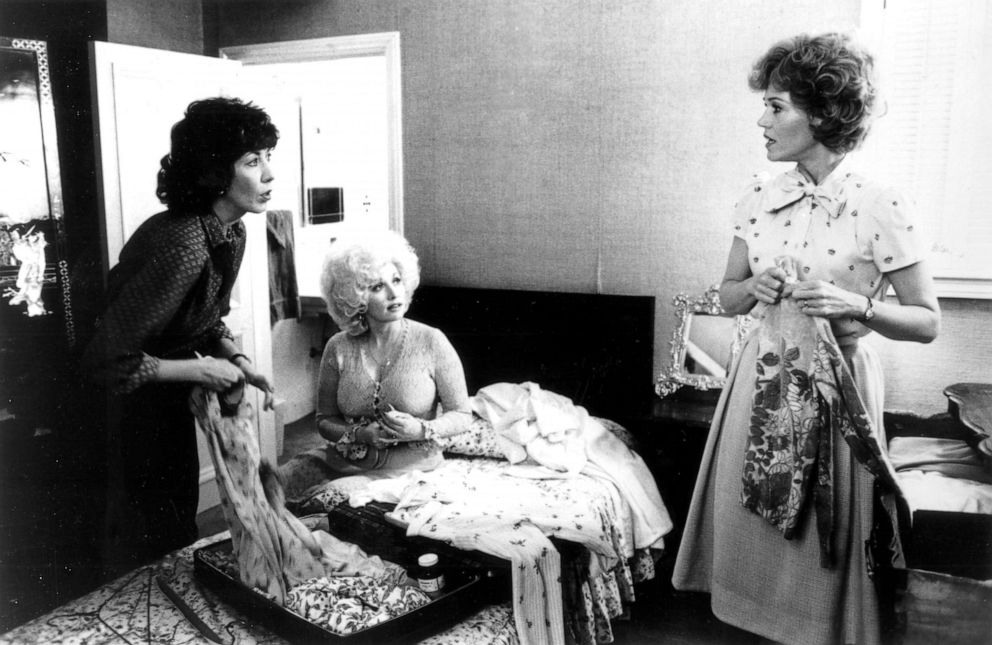 Michael Ochs Archives/Getty Images, FILE
Lily Tomlin, Dolly Parton and Jane Fonda in a scene from the movie "9 to 5."

In a 1977 interview, Parton talked with Barbara Walters about fighting for equal pay as a female country artist -- something she still firmly believes in today.

Parton passes on that spirit of support to future generations of female artists -- not to mention that she’s Miley Cyrus’ godmother. Parton said she will be a part of an all-female opening number at this year’s Country Music Association Awards on Nov. 13. Carrie Underwood will host the CMA Awards with Parton and Reba McEntire as special guest hosts. 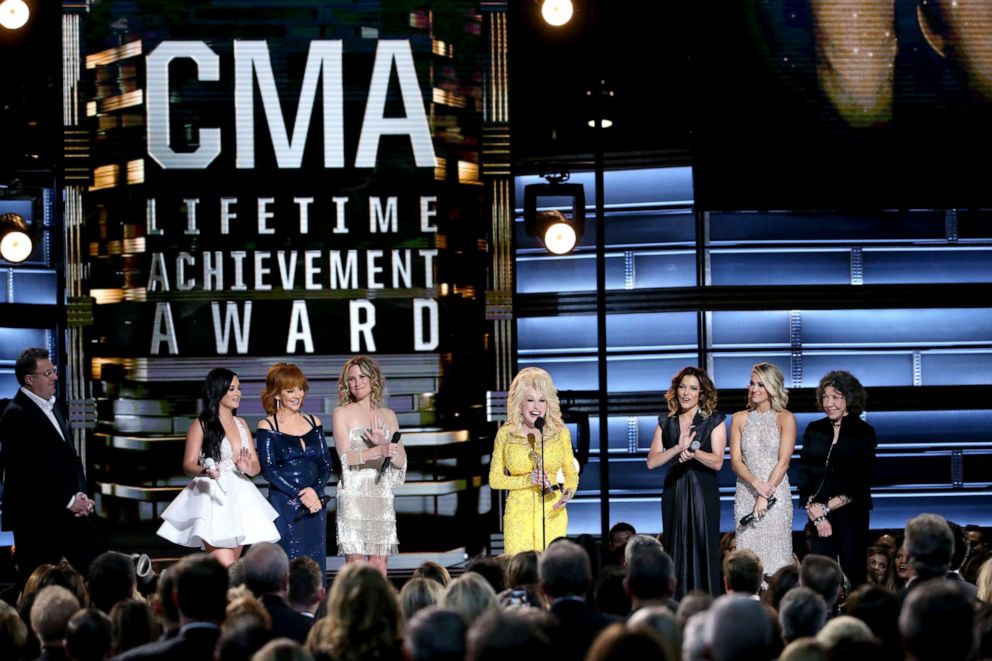 Parton is as revered for her craft -- she’s won nine CMA awards and eight Grammys -- as she is for her philanthropy.

In 1988, Parton formed The Dollywood Foundation to cut school dropout rates in Sevier County, Tennessee -- her home county. She later established the Imagination Library program in 1995, which sends one book per month to children from birth through kindergarten in participating communities spanning five countries.

Parton said her program has given away more than 125 million books worldwide.

“That's one of the things I'm proudest of,” Parton said. “It was based on the fact that my own dad couldn't read and write.”

And then there’s her amusement park, Dollywood. Located in Pigeon Forge, Tennessee, near where she grew up, Dollywood opened in the 1980s as an attraction for local families who often couldn’t afford to travel to Disney World or other major theme parks (The Walt Disney Company is the parent company of ABC News).

The butterfly that adorns Dollywood’s logo holds a special meaning for Parton.

“They tell stories about me getting lost in the woods, and getting in trouble chasing butterflies,” she said. “I wrote a song called ‘Love Is Like a Butterfly,’ and it became a big hit in my early years.”

Parton loves butterflies so much that she admitted she has some butterfly tattoos, even though she doesn’t show them off publicly. 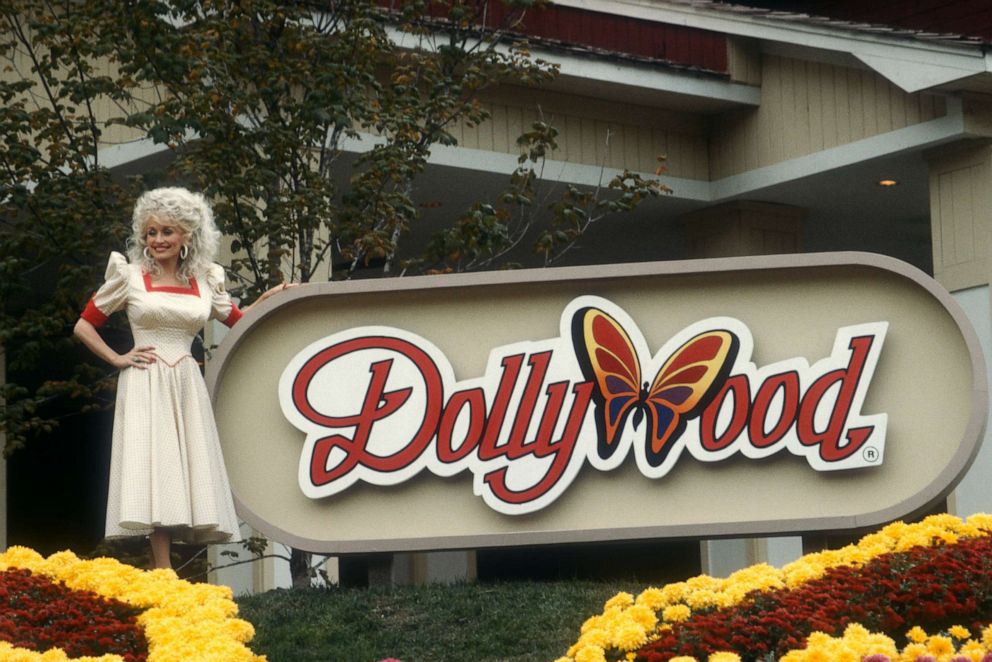 “I got them to cover scars or things,” Parton said. “If I have to get a scar for any reason, I never can kind of get rid of that purple look. So I thought, ‘Well, I'm going to kind of decorate these with some flowers or little butterflies or whatever.’”

Even today, Parton is still writing and performing. “Heartstrings,” an eight-episode Netflix anthology of stories based on her music, premieres Nov. 22. She's currently topping the dance genre charts with "Faith" -- a remix of the 1987 John Hiatt hit -- with EDM duo Galantis and Dutch singer Mr. Probz. She also has tour dates lined up through December.

(MORE: PHOTOS: The expansion of Dollywood)

“I've dreamed myself into a corner so I have to be responsible for those dreams. I have to be out there doing it,” Parton said. “Sometimes I work too hard, but I wanted this. I've seen these dreams come true and every time one dream comes true, you’ve got to support it.”

“I really feel like I'm supposed to be doing something good in this world,” she continued. “I just want to get out there and try to shine a little bit, if I can.”