When President Trump spoke to the nation Thursday about the shooting at Marjory Stoneman Douglas High School in Parkland, Florida, he did not mention the debate over gun policy. 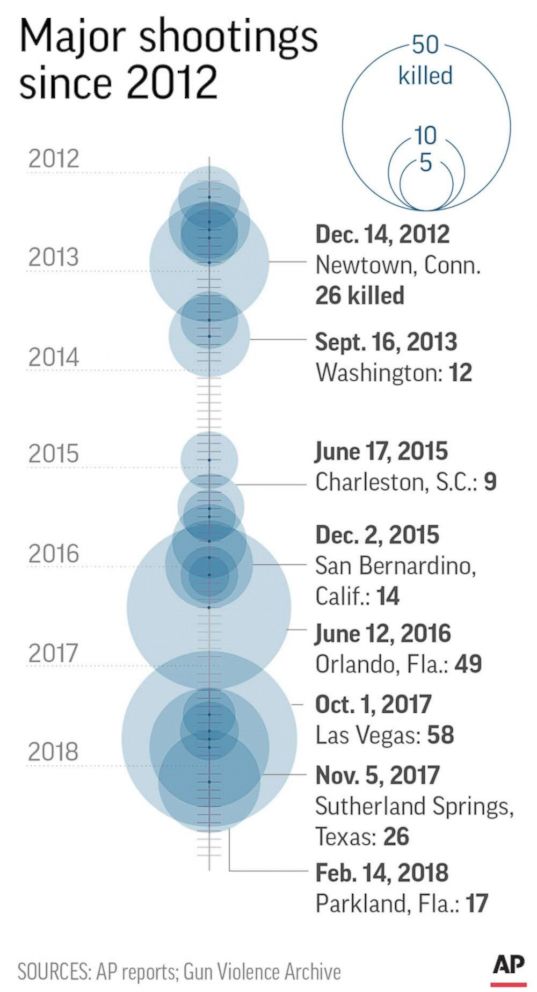 AP
Graphic shows death toll from major mass shootings in the U.S. since 2012.
Florida shooting survivor praises school response but warns 'this is something that people cannot get used to'
There have already been 18 school shootings in the US this year: Everytown

Trump said he plans to work with his administration to work on securing schools and tackling the issue of mental health.

"We must also work together to create a culture in our country that embraces the dignity of life that creates deep and meaningful human connections and that turns classmates and colleagues into friends and neighbors," Trump said, marking the fourth time the president has spoken to the country in the aftermath of a shooting.

While Trump spoke about mental illness, some members of Congress and outside advocacy groups are saying now is the time for a larger conversation about gun reform.

Some of those calling for a conversation are Marjory Stoneman Douglas students who hid in fear as a former student allegedly killed their classmates and teachers with an AR-15-style rifle, according to police. 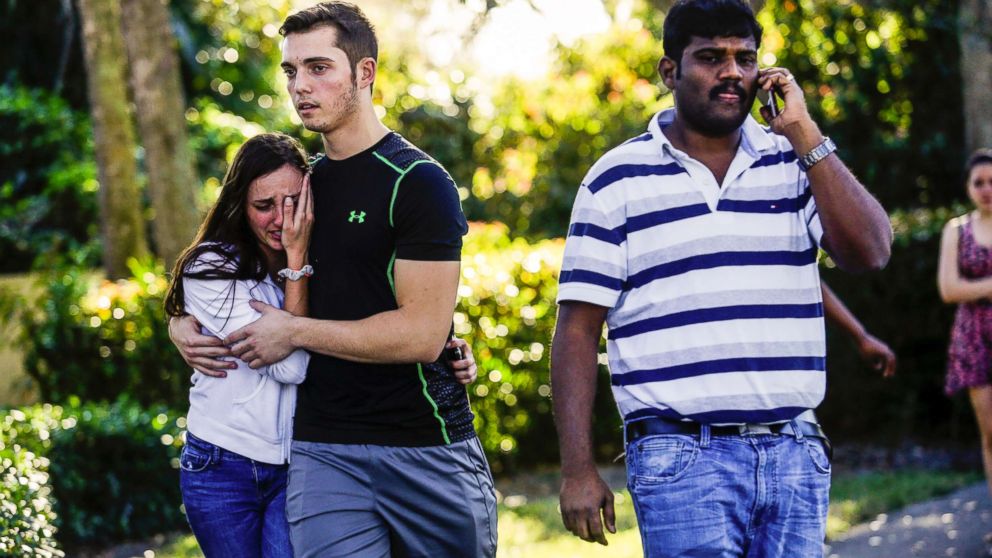 "Students have been reaching out to me, reaching out to staff, probably board members and others, saying that now, now is the time for this country to have a real conversation on sensible gun control laws in this country," Robert Runcie, Broward County Public Schools superintendent, said at a news conference Thursday. "So our students are asking for that conversation." 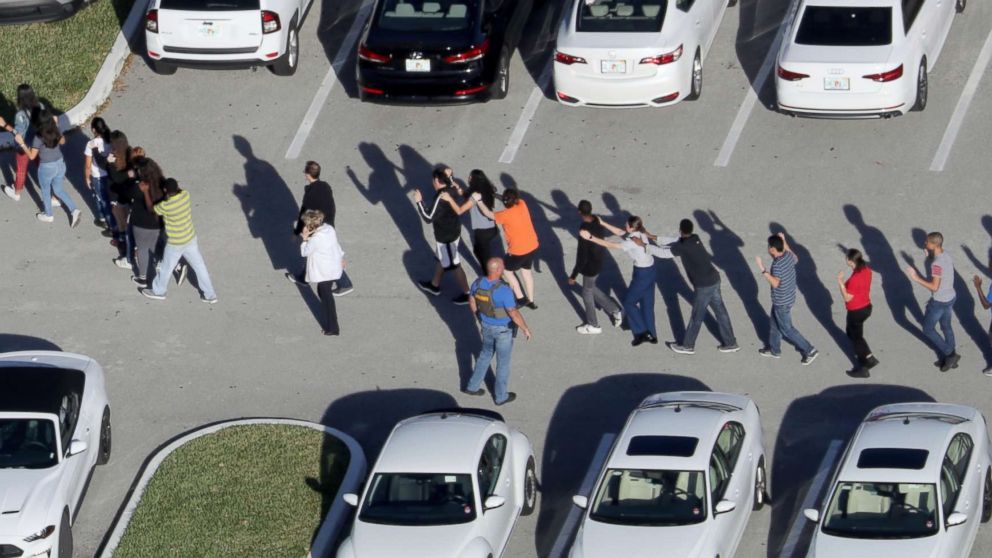 Mike Stocker/South Florida Sun-Sentinel via AP
Students are evacuated by police from Marjory Stoneman Douglas High School in Parkland, Fla., after a mass shooting on Feb. 14, 2018.

"I hope we can get it done in this generation, but if we don't, they will," he said.

“This is a time for our country to take a look in the mirror and realize there’s a serious issue here.” High School Senior David Hogg to @GStephanopoulos in Parkland, Florida: https://t.co/Acn0nBf2np pic.twitter.com/UFwHNrDi2z

/> Here is a look at the advocacy groups speaking up about gun control in the wake of the Florida high school shooting.

Everytown was co-founded by Michael Bloomberg and calls itself a "movement of Americans working together to end gun violence and build safer communities." The organization, with four million supporters across the U.S., is focused on four core issues: Closing the loopholes on background checks, supporting laws to keep guns away from domestic abusers, educating parents about safe storage and responsible gun ownership, and supporting stronger gun trafficking laws.

What they're saying: Everytown provides seven steps its supporters can take to prevent gun violence, including acting locally through their grassroots efforts, calling Congress and joining their mobile list of "gun sense activists" by texting ACT to 644-33.

Moms Demand Action, part of Everytown, was founded by a stay-at-home mom in 2012 in response to the shooting at Connecticut's Sandy Hook Elementary School that claimed the lives of 20 students and six teachers.

Today we mourn for Parkland; tomorrow we fight for them.

The organization now has chapters in all 50 states, powered by a grassroots network of moms who support "common-sense solutions" to decrease gun violence, according to its website.

What they're saying: Moms Demand Action also asks followers to text ACT to 644-33 and submit their zip code to receive updates about ways to get involved -- from contacting legislators to attending events -- in their local area.

Giffords was founded by Gabby Giffords, a former U.S. representative, and her husband, Mark Kelly, after the Sandy Hook Elementary School shooting . Giffords was shot in 2011 while meeting with constituents in her hometown of Tucson, Arizona.

It's the job of our elected officials to protect our kids in their classrooms and in their neighborhoods.

It should be their number one priority. https://t.co/0DIWoZVySM #Parkland pic.twitter.com/4sWnIJm6GJ

The organization focuses on shifting culture, changing policy and challenging injustice, according to its website. As two of the most high-profile gun control activists, Giffords and Kelly oversee a political action committee, a nonprofit focused on advocacy and lobbying, and the Giffords Law Center to Prevent Gun Violence.

What they're saying: Giffords is currently asking supporters to call their member of Congress to urge them to vote no on the Concealed Carry Reciprocity Act, which they say would mandate that each state recognize concealed carry permits from other states.

Sandy Hook Promise was founded and is led today by family members of the victims of the Sandy Hook Elementary School shooting. The organization's mission is to "prevent gun-related deaths due to crime, suicide and accidental discharge so that no other parent experiences the senseless, horrific loss of their child," according to its website.

What they're saying: Sandy Hook Promise encourages supporters to advocate for policy change, take its pledge to help protect children from gun violence and join its "Know the Signs" program to help prevent gun violence. The organization is currently pushing for passage of the STOP School Violence Act, HR 4909, to create new federal funding that would help train school officials, law enforcement and students on warning signs of violence and develop anonymous reporting systems for threats of school violence.

5 Calls was founded by a husband-and-wife team with the goal of making it easy for people to call their member of Congress about any issue.

We can either keep waiting for the "good guy with a gun" to finally show up, or we can convince our representatives to take action and prevent this from happening. #EndGunViolence

What they're doing: Users can sign up at 5calls.org, choose "Demand Action Against Gun Violence," and be provided with their senators' and representatives' names, phone numbers and talking points about gun violence to share on the call. Supporters can also use the site's app and sign up for weekly email alerts.

The Coalition to Stop Gun Violence is a non-profit organization founded in 1974 that is focused on policy and advocacy efforts to prevent gun violence, according to its website.

Every student in this nation deserves to be safe at school.

Every parent deserves peace of mind that their children are safe.

We can enact laws that will reduce the 38k gun deaths every year.

What they're saying: The Coalition is asking supporters to tweet their senators to vote against the Concealed Carry Reciprocity Act. Supporters can also sign up for email advocacy alerts.

The Brady Campaign was founded by Jim and Sarah Brady after Jim Brady was shot during the 1981 assassination attempt on President Ronald Reagan. The group has a goal to cut gun deaths in half by 2025, according to its website.

Yesterday's scene in Parkland, FL looked all too familiar.
We are tired of inaction. WE WANT ACTION. RT to say you have had #ENOUGH #StonemanShooting pic.twitter.com/2UfT4GbzJn

What they're saying: One of the Brady Campaign's top priorities is urging elected officials to support expanded Brady background checks for every gun sale. The organization, which has chapters across the country, also encourages supporters to change their social media profile in support of preventing gun violence and use the hashtag #ENOUGH.