The morning marked a special moment for heart and vascular surgeon Dr. Paul Saunders as he returned to Maimonides Medical Center in Brooklyn, New York, and was greeted with applause by hospital staff.

In March, Saunders had tested positive for COVID-19 after coming down with symptoms of the virus. 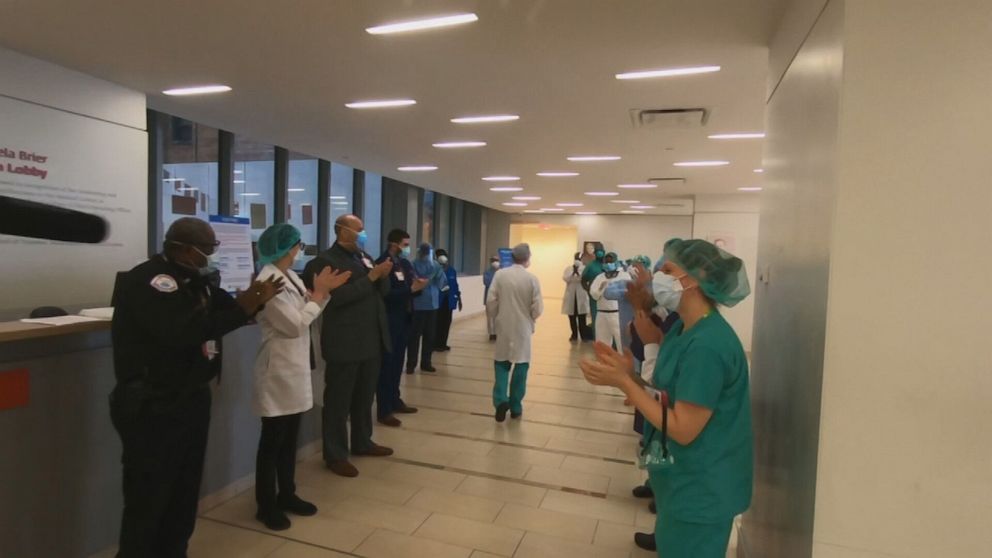 After fighting a mild case and recovering, he began his first full day at Maimonides on Thursday.

"Thank you very much," Saunders told staff and hospital workers who clapped in the lobby to welcome him back to work. "(This is) totally unexpected and undeserved but thank you all for coming to work and for working so hard. ... Happy to be back."

MORE: Nurse 'terrified' to return to work in ICU after aunt's COVID-19 death

Maimonides Medical Center invited ABC News into their facility. For several days, our team was guided through the hospital, meeting with emergency room doctors and walking through a recovery room-turned-into makeshift intensive care unit where 16 of the sickest patients with coronavirus, the more commonly used term for the virus, were being treated.

Saunders told ABC News on Thursday that one of the hardest things about not being at Maimonides was the feeling of letting everyone down inside the hospital.

"Everyone's working so hard and the whole time I was home, I was just anxious to get back, just get back and get back to work," he said.

A heart surgeon at Maimonides Medical Center returned to work after recovering from COVID-19 himself, receiving rousing applause from hospital employees welcoming him back to treat coronavirus patients. https://t.co/uqgIODJwIB pic.twitter.com/8KbJRpMbYL

His arrival at the hospital was a special day for the community as well because Saunders is trained in a specialized weapon against COVID-19 called ECMO or extracorporeal membrane oxygenation.

"ECMO provides us a way to basically ... do the job of their lungs," Saunders said. "Some people describe it as intravenous oxygen."

He told ABC News ECMO was "really a treatment of last resort." Saunders is currently treating two patients with ECMO in the ICU.

He said that the hospital could do four to five patients on the treatment and that doctors screened patients carefully to decide which ones were the best candidates.

MORE: Doctors say COVID-19 tests available, but some can't be administered due to mask shortage

"Obviously with so many people being so sick, ECMO is still a relatively scant resource so we have to use it very judiciously and apply it to patients who really are failing every other possible treatment strategy. ... We have to be very careful as to who we're going to offer it to and making sure that those patients are ones that are, really have a good chance of a good benefit," Saunders told ABC News.

Before he got sick, Saunders had administered the treatment to one of the patients at the medical center. The surgeon said he received updates from home on the patient’s condition and was able to stay on top of the patient's progress.

"Everyone's really been, you know, pitching in and everyone wants to help," he said. "People are working outside their normal comfort level but everyone's coming to work every day with good attitudes, really wants to get in there and take care of these patients. ... We see the best in our team, the best in our hospital, the best in our institution during times like this." 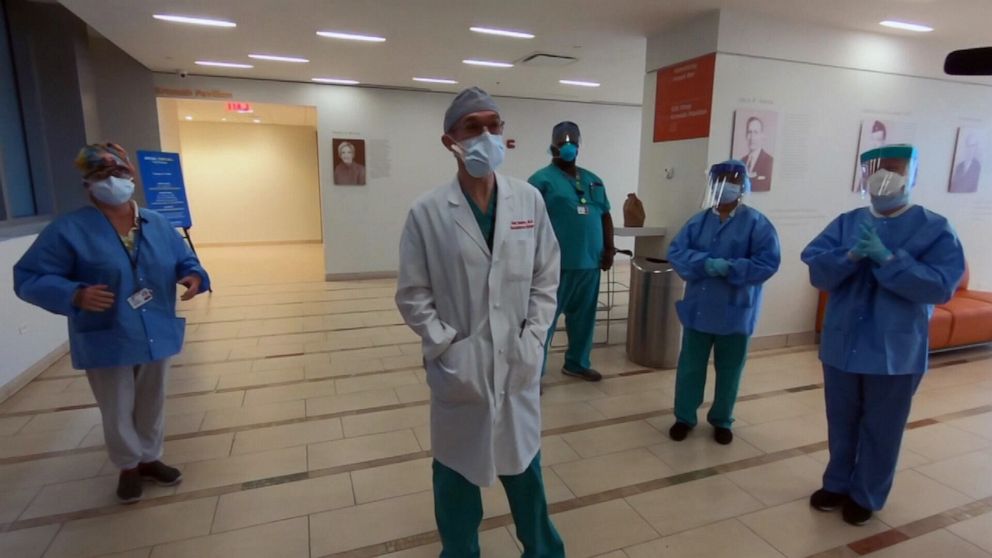 During an earlier visit to Maimonides, nurse Yosef "Joe" Kaydanov said the fight against coronavirus was "literally a battle that's really hard to beat."

He told ABC News that he'd originally been skeptical about the severity of COVID-19 in the beginning.

"I was one of the people that said, 'This is fake. This is not real. This is gonna be fine. We'll get over it. This is the flu,'" Kaydanov said. "It's not the flu. This is so far from the flu."

He said that people needed to see what was happening at Maimonides and hospitals across the U.S. during the pandemic and he encouraged residents to follow stay-at-home orders.