While millions have eagerly awaited the arrival of coronavirus vaccines, hoping they'll help restore a sense of normalcy, many others, including some health care workers, still appear concerned with their efficacy.

Less than a month after vaccines by Pfizer and the Moderna COVID-19 were granted emergency use authorization, hospitals and state officials are reporting that some doses are being left unused. For months, polls have revealed that some Americans remain hesitant to take the vaccine, with many concerned that it was developed too rapidly.

"I am definitely concerned that health care workers are electing to wait to get vaccinated," Nancy Messonnier, director of the National Center for Immunization and Respiratory Diseases at the U.S. Centers for Disease Control and Prevention, said in a briefing last week.

Dr. Mitchell Katz, CEO of New York City Health and Hospitals, said last week that "around 30%" of medical workers have so far opted out of vaccinations. In Georgia, vaccine distribution has been expanded to older adults and other front-line workers, such as firefighters and police, after health care workers in some parts of the state were reluctant to receive them. 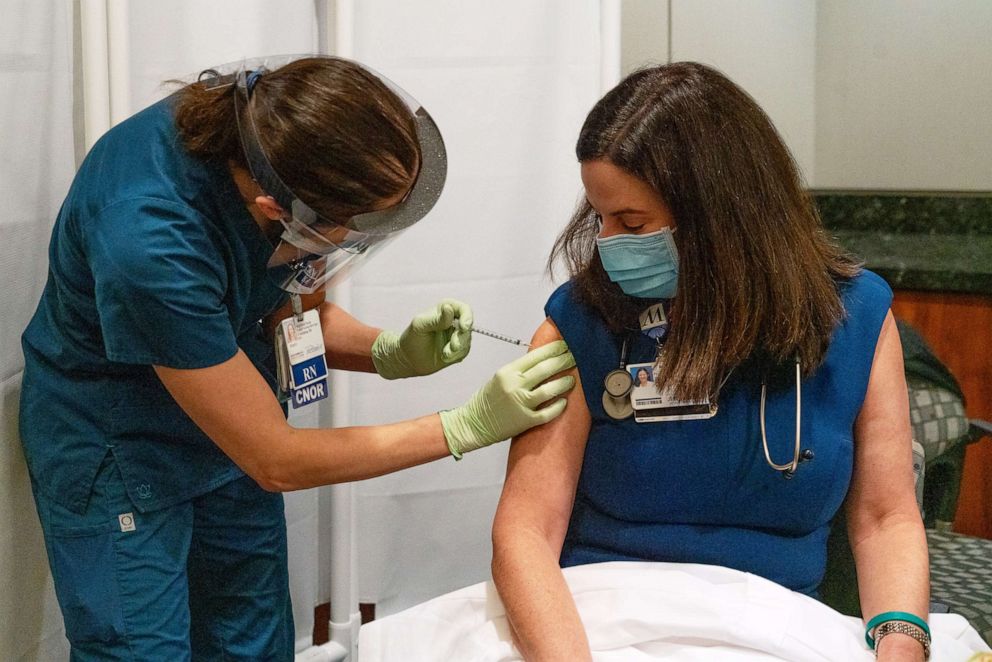 Hospitals and businesses have found themselves confronted by a precarious balancing act -- ensuring workplaces are safe but without infringing on employees' personal medical rights.

Some hospital leaders and local officials have resorted to creative solutions -- offering gifts or cash incentives -- to employees who agree to be immunized.

Houston Methodist, a large flagship hospital in Texas that employs over 26,000 people, has begun to offer its employees a $500 "hope bonus" if they agree to receive a COVID-19 vaccine. About 60% of the hospital's employees have been vaccinated.

Hospital president and CEO Dr. Marc Boom detailed the new bonus in a letter, obtained by ABC News, sent to his staff earlier this month.

"This bonus is a thank you for your perseverance throughout a difficult 2020, as well as something to look forward to, to provide hope, during the next couple of challenging months," Boom wrote to his employees. "Eligibility criteria will include getting a COVID-19 vaccination, fulfilling our obligation as health care workers to lead the community."

MORE: Inhaling away the virus: Is the next generation of COVID vaccines on its way?

Vaccinations at Houston Methodist are not mandatory, but Boom told ABC News they likely will be "eventually" -- at least for workers who can safely receive it. 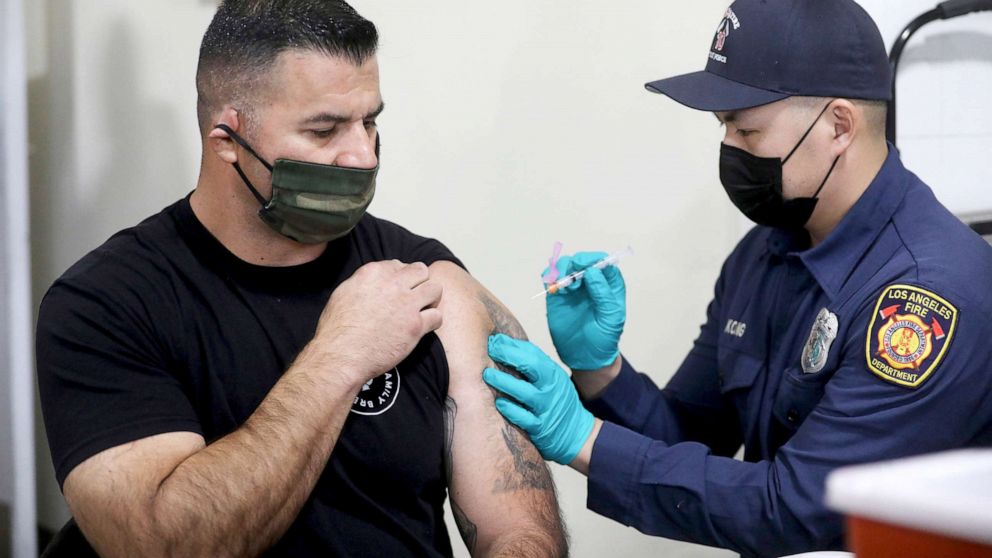 Houston Methodist made the flu vaccine mandatory 15 years ago, with exceptions for religious conflicts or health complications, and more than 99% of staff members get it every year.

"We believe in science, and we are a science-driven institution," Boom added.

Directly rewarding employees has proven successful before, Boom added, so "why not reinforce good behaviors when we were going to pay a bonus anyways?"

Similarly, Northampton County, in Pennsylvania, is offering employees at Gracedale, the county nursing home, $750 each to get a COVID-19 vaccine.

Despite precautions taken early in the pandemic, at least 76 residents have died from the virus. The facility, with about 535 residents and 650 employees, is one of the largest in the state.

"What we were hearing, as we began preparing our employees for vaccinations," County Executive Lamont McClure told ABC News, "was that there was going to be a great deal of resistance to being vaccinated."

Less than 1% of America's population lives in long-term care facilities, but as of Jan. 7, residents and staff from the facilities have accounted for 37% of the country's COVID-19 deaths, according to data collected by the COVID Tracking Project.

MORE: Inhaling away the virus: Is the next generation of COVID vaccines on its way?

"We cannot get a grip on controlling the deaths from COVID-19 and the pandemic until everybody who works in a nursing home or long-term care facility is vaccinated," McClure said. "I have to say, I'm disappointed, because we cannot save lives and livelihoods, until we get everybody -- not just residents, but employees in our nursing homes, vaccinated."

Although it's still too early to determine whether offering cash was effective in changing minds, McClure said that the local union president does believe that some of the people, who were on the fence, did get the vaccine because of the incentive.

To date, about 22% of Gracedale's employee population has been vaccinated, a figure McClure is hopeful will quickly rise.

The Los Angeles Fire Department also has gotten creative in pushing for vaccinations, offering reluctant firefighters who get both doses of the Moderna vaccine prizes like Canary home security cameras, Google Nest entertainment systems, Aventon fixed-gear bicycles and gift cards for Airbnb and Lyft, according to a memo distributed last week by Chief Ralph M. Terrazas.

Capt. Erik Scott, a spokesman for the LAFD, told ABC News these incentives were "always part of the plan" that included firefighters receiving information on the vaccine and top officials getting the vaccine themselves, to lead by example.

Scott said the incentives appear to be working, with nearly half of the department's 3,400 members having been vaccinated.

That figure is "increasing as we speak," Scott said. "Our goal is 100% vaccinated." 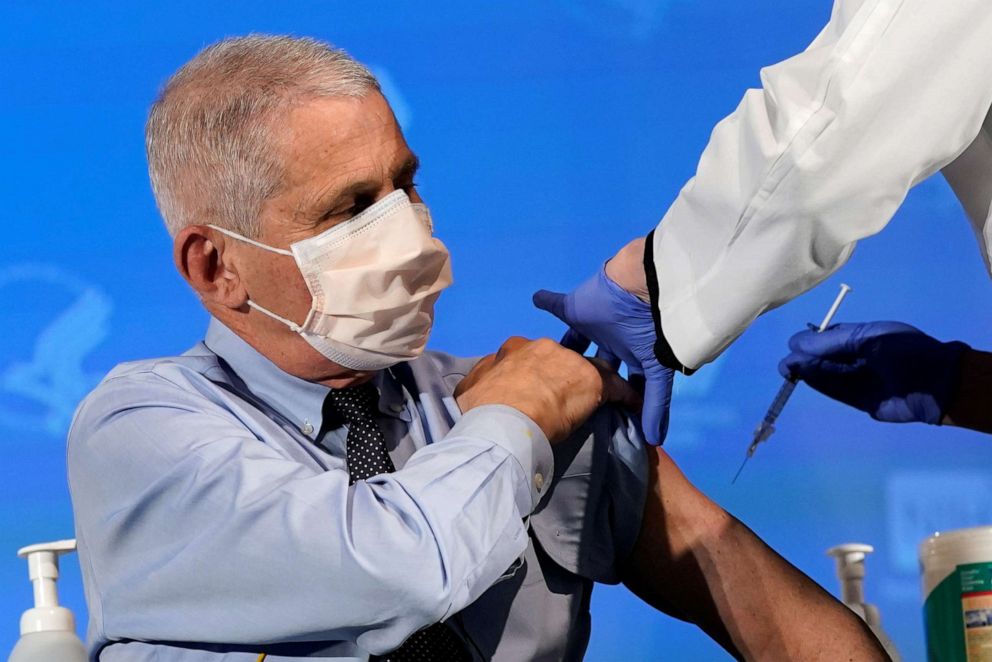 The ethics surrounding whether people should be paid to get vaccinated are a bit less clear.

Dr. Anthony Fauci, the nation's leading infectious disease expert, said it's critical for about three-quarters of the U.S. population to be vaccinated in order to reach "herd immunity" and help thwart virus spread. If fewer are immunized, the herd immunity will be less effective -- more people will get sick, more people will die.

"We need to get people vaccinated, for their own safety and that of the people around them," Dr. Nir Eyal, a professor of bioethics, told ABC News. "Giving a gift is not in itself a very problematic act. So it may seem like a no-brainer that these hospitals are doing the right thing.

"For me, however, whether it is the right thing to do depends -- it depends on whether the gift would raise questions like, 'If this vaccine is supposed to be so great for me and my family, why are they giving me a gift to accept it?' Gifts can sometimes backfire in that way. Behavioral economists have shown that so-called conditional cash transfers and other conditional benefits can make people apprehensive about doing things that they would happily -- and wisely -- do otherwise."

Clearly presenting the gift as a "thank you" or as a "reward," rather than as part of a "quid pro quo," is less likely to backfire, Eyal added.

Dr. Jennifer Miller, an assistant professor at Yale University School of Medicine, told ABC News that although it's not unethical from a medical standpoint, paying people to receive vaccines may not be necessary or wise.

"Ideally," she said, "people should get vaccinated to help themselves and others -- not for money."

Money and resources used for such rewards could be better spent getting more people vaccinated, said Miller, who shared concerns similar to Eyal's about whether paying people may arouse suspicions.

"Payment may lead people to question why they are being paid -- asking misguidedly, for example, if there are higher risks than there really are," Miller said. "I think the question could be more salient if we decide to mandate vaccines -- then we could ask whether it is better to pay people or mandate vaccinations with corresponding penalties for failures."