Like many couples, Jimmy and Rosalynn Carter have spent a lot more time together during the pandemic.

That time has only helped bring the former president and first lady closer together, the two told ABC News' Steve Osunsami during an interview in their hometown of Plains, Georgia, last week ahead of their 75th wedding anniversary.

"We have hardly left our house," Jimmy Carter, the 39th president, said. "Before that we had not been together all that much -- ordinary family travel and so forth."

"It was just Jimmy and me," Rosalynn Carter said. "And it was really wonderful." 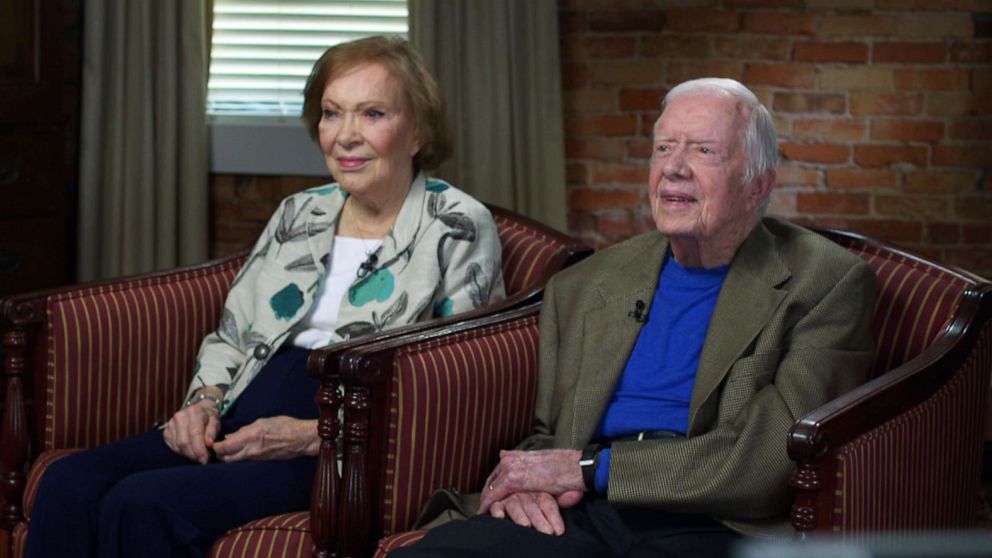 At 96, Jimmy Carter is the oldest-living American president and the longest-living president in this country’s history.

He and his wife have known each other most of their lives -- they lived close by in their hometown of Plains, and Rosalynn Carter was best friends with Jimmy Carter's little sister, Ruth.

"I spent a lotta time at that house, but he was always off at school," Rosalynn Carter, 93, recalled. "He was so good to Ruth. He would write her letters, and she talked about him all the time. And she had his photograph on the wall in her bedroom. And I literally did fall in love with that photograph."

Jimmy Carter recalled how after their first date, he told his mother, "That was the girl I wanted to marry." 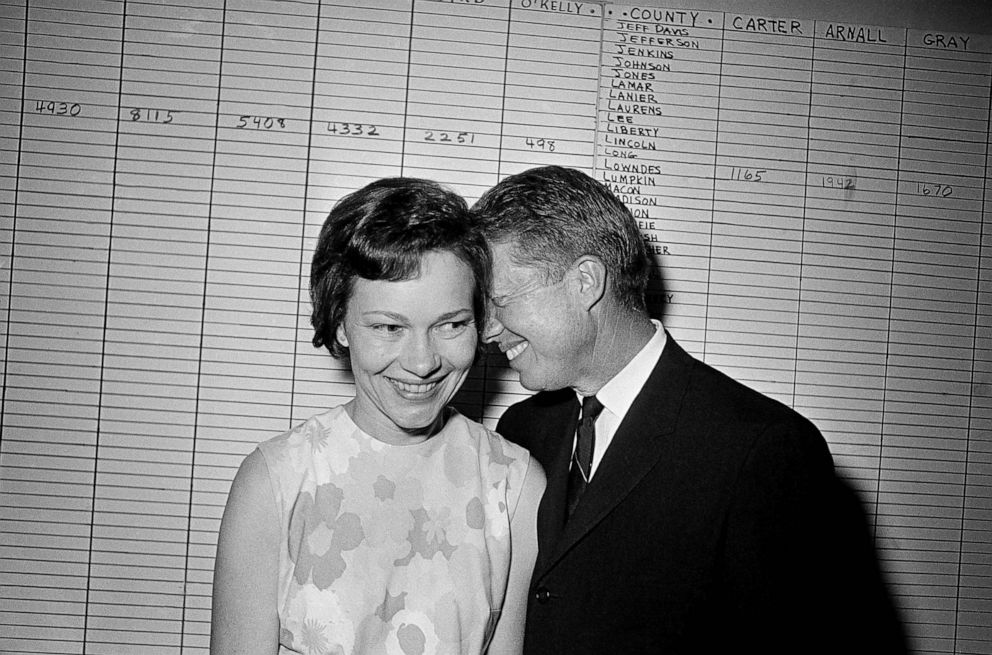 When he first proposed, about six months later, Rosalynn Carter actually said no -- she wanted to graduate from college first, as she had promised her father on his deathbed a few years earlier. "But he was persistent," she said.

The two wed on July 7, 1946, at a Methodist church in Plains after Jimmy Carter graduated from the United States Naval Academy.

The president said marrying Rosalynn Carter was the "most important thing in my life."

"It was happy and joyful and obviously long-lasting," he said. "Rose did say OK finally, and staying with me all this long has been the most wonderful thing in my life." 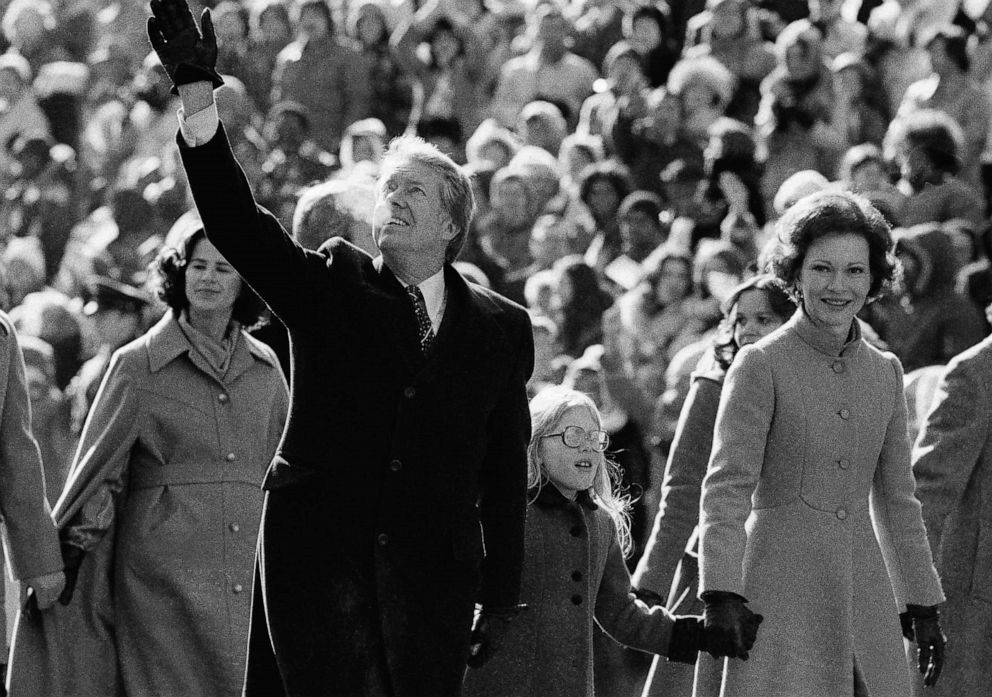 Suzanne Vlamis/AP, FILE
President Jimmy Carter and first lady Rosalynn Carter have one hand for the crowd along Pennsylvania Avenue and one for their daughter Amy,in Washington, Jan. 20, 1977.

After 75 years together, four of which were spent in the White House, the Carters are the longest-married presidential couple in U.S. history.

It hasn't been without its ups and downs, but that's made it exciting, Jimmy Carter said.

SLIDESHOW: Jimmy Carter through the years

"We've survived this long together because first of all, we give each other plenty of space to do our own thing," the president said. 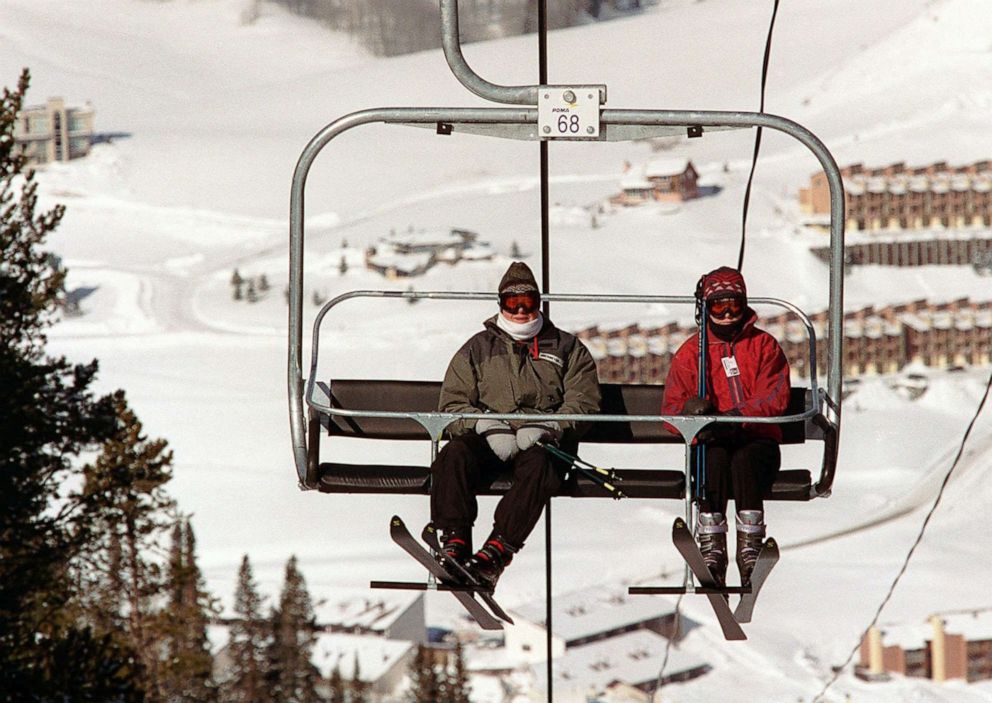 At the same time, they also make an effort to "share as much as we possibly can," he said, from bird watching to skiing to, especially, fly fishing, which they have done in over a dozen countries, he said.

"We make a big one-week trip out of that," he said. "We have made that a major part of our recreation."

Jimmy Carter tells us that he and his wife were still routinely fly fishing at their home in Plains as late as last year.

"We're always looking to do things or find things we can do together, like fly fishing and bird watching and just going out to the pond, catch a fish," Rosalynn Carter said.

After getting vaccinated against COVID-19, the Carters started returning to church for Sunday service this past February.

The two read the Bible together each night. "We've done that for 60 years, probably," the president said.

"When I'm overseas and Rose is at home, we know we're reading the same biblical text, and even though we're separated physically, it makes us think about the same scripture and admonition from God, direction from God, before we go to sleep," he said. "So it helps a lot."

They also, as the Bible heeds, try not to go to bed angry, they said. 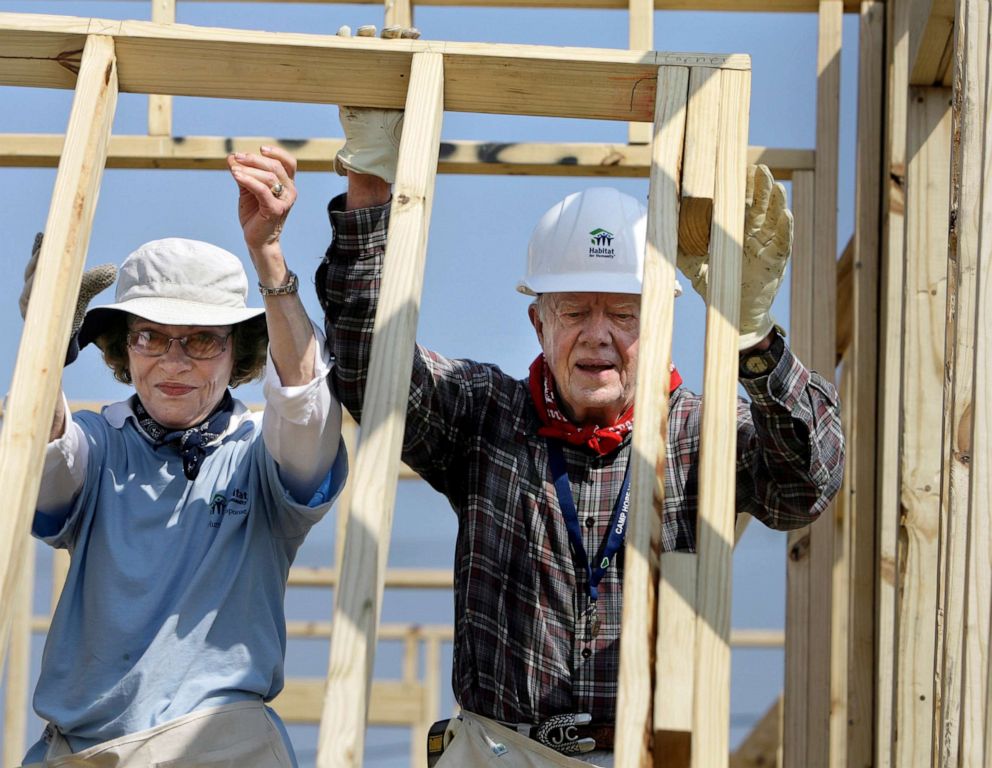 And, of course, there's their decades-long volunteer work with Habitat for Humanity, where they've participated in the annual, weeklong Jimmy and Rosalynn Carter Work Project and helped build and repair homes in over a dozen countries.

"We've been blessed to be able to travel the world, almost," Rosalynn Carter said. "Everything with Jimmy Carter has been an adventure." 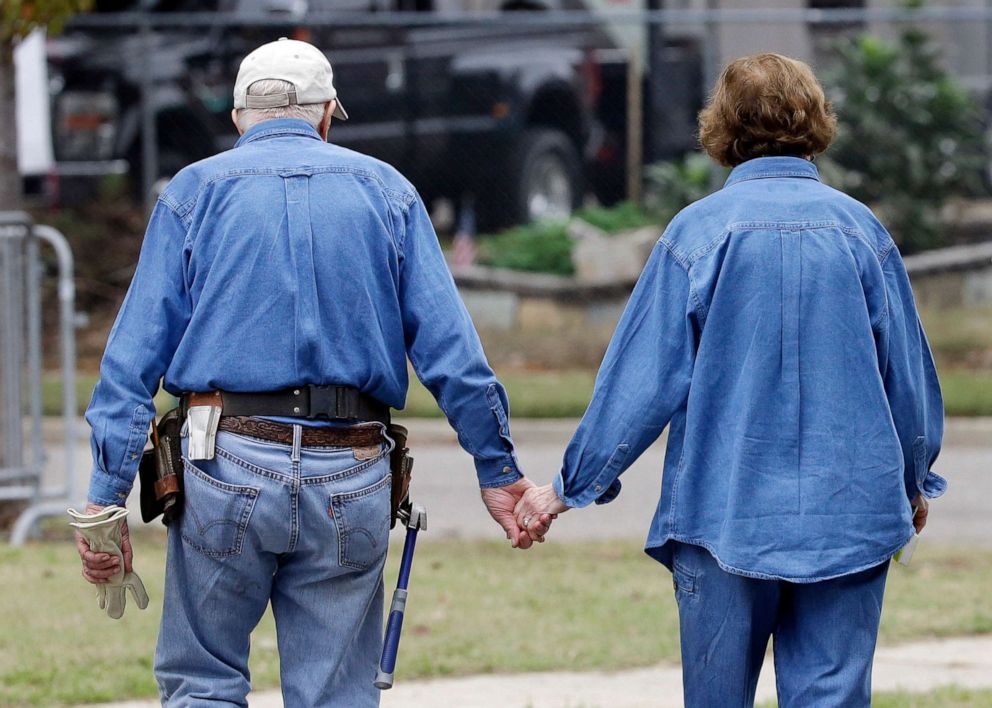 To mark their major milestone, the couple, who have four children and over a dozen grandchildren and great-grandchildren, have planned an anniversary party in a hometown school.

"We've got everything arranged so we can accommodate a big crowd," Jimmy Carter said.

The president also bought his wife a diamond necklace, with the number "75" designed on the back, that she said she hasn't taken off since he gave it to her last month.

"For 75 years of marriage we've always gone deeper in our love for one another," the president said. "I think that's a kind of extraordinary thing. Doesn't happen to very many couples, but it certainly happened to us."