In their first interview since announcing his candidacy, former Vice President Joe Biden and Dr. Jill Biden sat down with ABC's "Good Morning America" co-anchor Robin Roberts and addressed issues from Biden's past that have drawn criticism.

"I've always thought that part of leadership, part of politics was listening to people, hearing them, making them feel comfortable," Biden told Roberts Monday. "It's my responsibility to be more sensitive to whether or not someone wants me to reassure them or wants to say hello or wants to show affection and support. And that's my responsibility."

In the lead up to his formal entry, Biden faced controversy after several women accused him of making them uncomfortable with what they considered inappropriate touching. He posted a video acknowledging that "social norms are changing" and promising he would be "much more mindful," calling it his "responsibility." 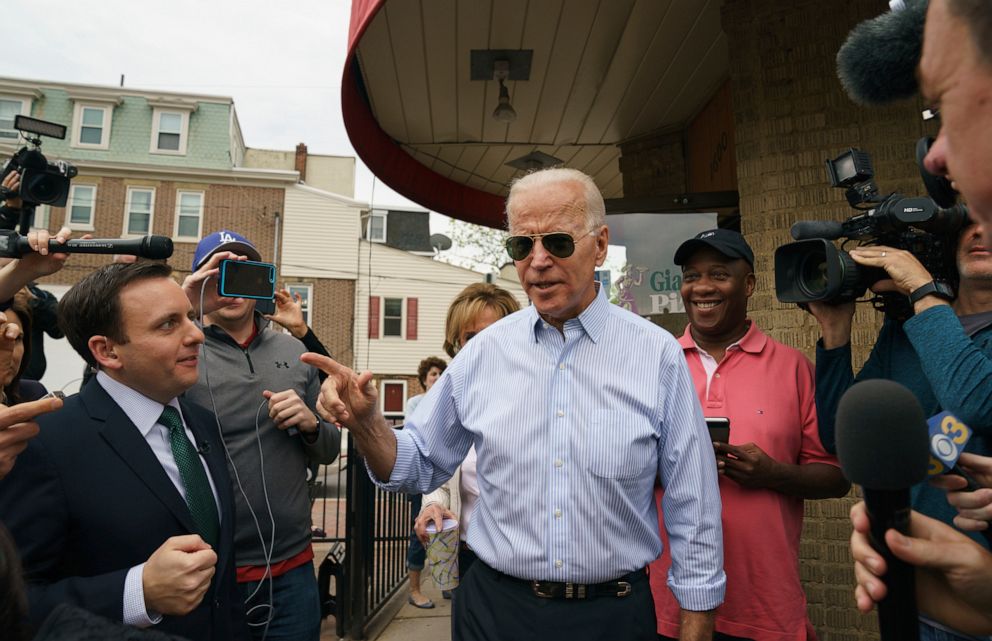 But days later, Biden seemed to joke about having "permission" to give hugs at a speech -- which caused some to question Biden's previous message.

"I think what you don't realize is how many people approach Joe. Men and women, looking for comfort or empathy," she said. "But going forward, I think he's gonna have to judge -- be a better judge -- of when people approach him, how he's going to react. That he maybe shouldn't approach them."

She said she had also experienced past situations where she felt men had invaded her space, and did not speak up, but that things are different now.

"I just sorta stepped aside. I didn't address it. I -- like you said -- I mean, things have changed. There was a time when women were afraid to speak out," Dr. Biden said. "I can remember specifically it was in a job interview … if that same thing happened today, I'd turn around and say, "What do you think you're doin'?" So I think it's-- it's totally different."

Dr. Jill Biden to @GMA on allegations of inappropriate touching against Joe Biden: "What you don't realize is how many people approach Joe—men and women—looking for comfort. But going forward, I think he's going to have to...be a better judge" https://t.co/gXX4ccPbdg pic.twitter.com/y7PhLWbj7s

Biden on Anita Hill: "She did not get treated well"

Biden also spoke about his role in Anita Hill's testimony during Supreme Court Justice Clarence Thomas' confirmation hearing, when he served as chairman of the Senate Judiciary committee. Biden said he took "responsibility" for the way Hill was treated.

Biden on the middle class, the economy and his twist on Trump's slogan: "Make America Great Again"

The Bidens were interviewed ahead of the former vice president's first campaign event in Pittsburgh on Monday afternoon -- where Biden made his pitch to union and working class voters, some of whom voted for President Donald Trump in 2016.

When asked how he would make his pitch to those voters with a strong economy under Trump, Biden said they should look at what Trump has actually done to improve their bottom line.

"What I'd say is did you get any benefit from the tax cut? Have your wages really gone up to what you think you deserve? Do your employers treat you with any more respect and dignity than they did before?" Biden said.

Pres. Trump’s slogan is “Make America Great Again.” Asked what his slogan may be, Joe Biden tells @RobinRoberts, “Make America Moral Again. Make America return to the essence of who we are, the dignity of the country ... treating our people with dignity" https://t.co/zIVKMzdStV pic.twitter.com/xbkfS9QFgm

And Biden said he has a different take on Trump's "Make America Great Again" motto. 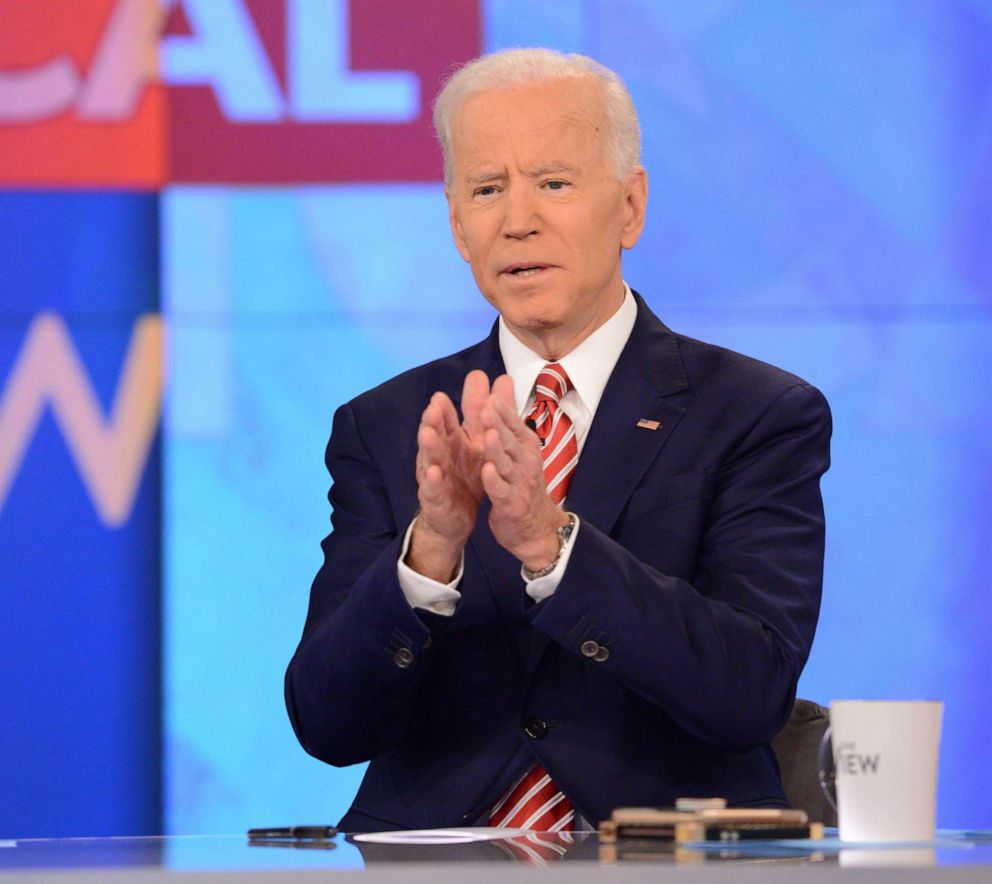 With widespread name recognition, Biden emerges in the crowded field as a front-runner early. In the most recent ABC News/Washington Post poll released Sunday, 17 percent of Democrats and Democratic-leaning independents support Biden in an open-ended question. He also topped his Democratic rivals with an impressive $6.3 million fundraising haul in the first 24 hours of his campaign, according to an email to supporters.

Biden said he will dive into more policy specifics "in the coming weeks," but weighed in on health care, saying he believed there should be an option to buy into a public option -- rather than Medicare for all.

"We have to take what we already have and make sure that we don't cut it back. I think we have to significantly improve where we were and h-- make Medicare an option for all. You can buy into the system. But not Medicare across the board for everyone and eliminate private insurance," Biden said.

Joe Biden tells @GMA he's running for president for 3 basic reasons: "To restore the soul of America," to restore "the backbone of America, which is the working class," and "we have to unite the country" https://t.co/NUhIoWr7nq pic.twitter.com/JRBxzag5X7

Biden on the Mueller report: He doesn't believe Democrats should push to impeach Trump yet

On special counsel Robert Mueller's report on the Russia investigation, Biden said he doesn't believe Democrats should push to impeach Trump yet, rather Congress should continue its investigations. But Biden didn't take impeachment totally off the table.

"There are elements of the report in the second phase of the report -- about seven or eight things that are left undone. [Mueller] was not within his purview to investigate, he thought. The Congress is attempting to take that up," Biden said.

"What the Congress should do, and they are doing, is investigating that. And if in fact-- if in fact they block the investigation, they have no alternative but to go to the only other Constitutional resort they have, which is impeachment. But my job in the meantime is to make sure he's not back as president of the United States of America."

Biden on a female running mate: It would be "presumptuous" for him to decide anything now

When asked about fellow 2020 candidate Sen. Cory Booker's pledge to have a female running mate, Biden said it would be "presumptuous" for him to decide anything now, but did say he wants a staff that reflects the make up of the United States.

"If you take a look at most of my staff. I mean, they reflect who we are. Men, women, African Americans, Asian Americans, Hispanic -- Latino. I mean, so it would be a government that would represent everyone. Who that would be if I were fortunate enough to win-- I have -- I haven't made that decision," the former vice president said.

Dr. Biden agreed that it was too soon to pick a running mate, and said while it would be important to her to see a woman on the ticket, having someone 'qualified' for the job was most important.

Biden on his record: He feels he has “one of the most progressive records of anyone running”

The former senator who represented Delaware formally entered the presidential race last week as the 20th Democrat vying for the nomination and the opportunity to take on President Donald Trump next year. He released a video posted on social media in which he sought to carve out his own lane amid a crowded Democratic primary by taking direct aim at Trump and staking his candidacy on a "battle for the soul of this nation."

While Biden is seen by some as a more moderate candidate than some of his 2020 Democratic challengers, like Sen. Bernie Sanders, I-Vermont, and Sen. Elizabeth Warren, D-Mass., the former vice president recently said he has “one of the most progressive records of anyone running,”—a statement he defended.

“I was always labeled as one of the most liberal members of the United States Congress. If it makes you progressive to mean that you are for Medicare for All or it makes it progressive, then that wasn't the standard of what constituted in the past what is progressive,” Biden said.

Despite large differences in policy, Biden believes the Democratic party is more united than they have been in the past—and isn’t looking to break bad on his fellow Dems.

“I've adopted a rule my whole career, never speak ill of another Democrat,” Biden said. “I respect all the people in there running. I really do, all 20 of 'em. They're s-- they all have different talents and some-- a lotta the same talents. But the truth of the matter is that it's not about-- I'm not running against them.”