The U.K. has become the first western country to begin a mass vaccination program against the novel coronavirus on Tuesday as hospitals around the country take part in “the biggest immunization program in history.”

National Health Service (NHS) staff made their final preparations throughout the weekend for the rollout, which will begin with over 80s, front-line health workers and carers with 50 hospital hubs that have been converted to administer the first wave of vaccinations, and more hospitals to begin vaccinating over the coming weeks and months.

“Despite the huge complexities, hospitals will kickstart the first phase of the largest scale vaccination campaign in our country’s history from Tuesday,” NHS Medical Director Stephen Powis said in a statement. “The NHS has a strong record of delivering large scale vaccination programs – from the flu jab, HPV vaccine and lifesaving MMR jabs – hardworking staff will once again rise to the challenge to protect the most vulnerable people from this awful disease.”

The first patient to receive the vaccine outside of clinical trials was Margaret Keenan, a 90-year-old woman from Northern Ireland who has been self-isolating for most of the year. After receiving the first dose, she said, “I wasn’t nervous at all. I don't know what to say, it's just overwhelming as the first really,” before encouraging others to follow suit as "it's the best thing that's ever happened."

90-year-old Margaret Keenan, the first person in the world to receive the Pfizer/BioNTech COVID-19 vaccine outside a clinical trial, urges others to come forward to be given the jab. https://t.co/PlBqaezp9a pic.twitter.com/OYiEbbUEj0

The second patient to be vaccinated was William Shakespeare, 81, at the same hospital in Coventry, England, and social media lit up with references to his legendary playwright namesake.

Prime Minister Boris Johnson visited a hospital in central London, and described the experience of meeting another vaccinated patient as "exciting" and "moving."

"There is nothing to be nervous about," he said. "It's safe, it's the right thing to do, it's good for you and it's good for the whole country.” 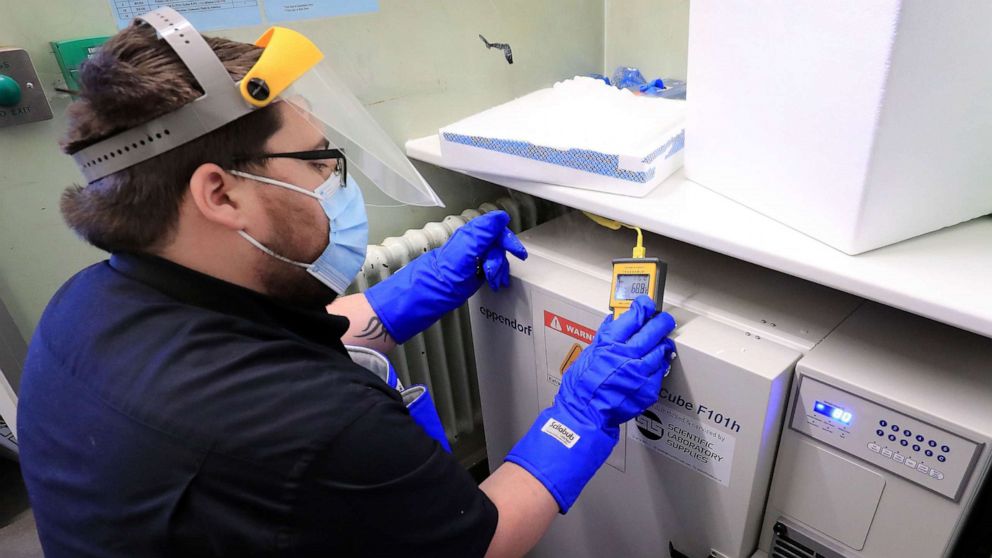 Gareth Fuller/AFP via Getty Images
A pharmacy technician from Croydon Health Services takes delivery of the first batch of COVID-19 vaccinations at Croydon University Hospital in south London on Dec. 5, 2020.
MORE: What to know about COVID-19 <a href="https://abcnews.go.com/alerts/vaccinations" id="_ap_link_vaccines_Vaccinations_" target="_blank">vaccines</a> and how they work

After the top priority groups have been vaccinated, the next categories eligible will be determined by age group, with the last to receive the vaccine being the under 50s.

The vaccine will be delivered with an injection to the shoulder but needs to be stored at -94F thawing meaning there is a complex logistical process to deliver the vaccine to patients.

MORE: Children will not likely see a coronavirus vaccine until late 2021: Experts 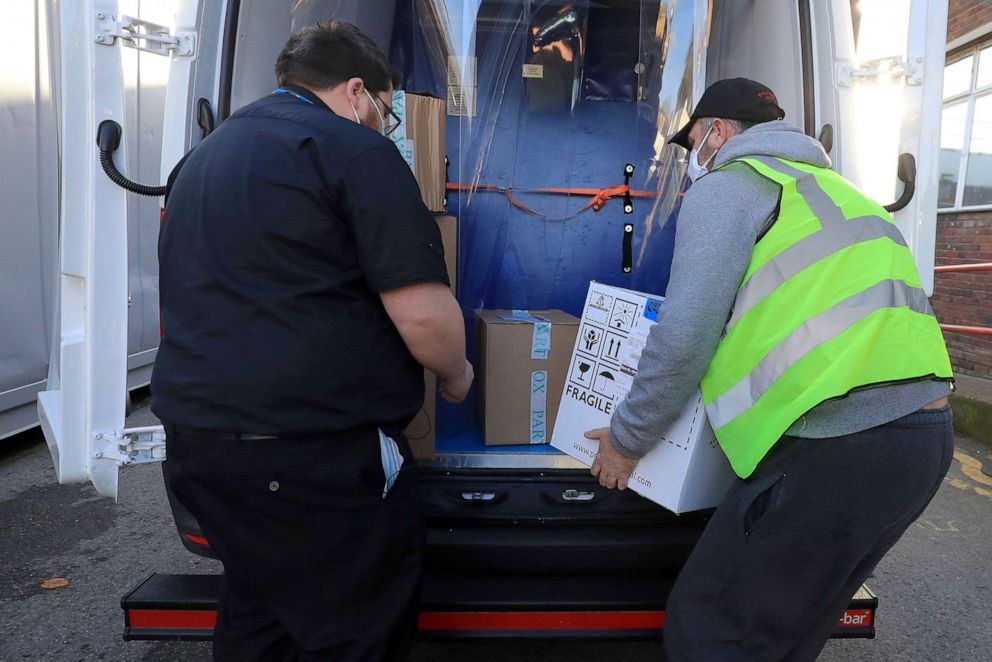 The U.K. became the first country in the West to approve a vaccine for mass use last week when the Medicines and Healthcare products Regulatory Agency (MHRA) approved the Pfizer and BioNTech vaccine which clinical trials found was 95% effective.

Direcotr of the National Institute of Allergy and Infectious Diseases Dr. Anthony Fauci clarified recently comments that suggested the British regulators had not acted “as carefully” as their American counterparts would have, by saying he had “great faith in both the scientific community and the regulatory community at the U.K.

MORE: How will a COVID vaccine be distributed once it's approved by FDA?

Dr. June Raine, the Chief Executive of the MHRA which approved the vaccine, said that the data had been “reviewed with rigor” in an op-ed in the Times of London published on Monday.

"For those concerned, I can assure you without reservation that the standards we have worked to are equivalent to those around the world — no corners have been cut,” she wrote.

The U.K.’s Health Secretary Matt Hancock welcomed the upcoming vaccinations as a “historic moment,” but continued to “urge everybody to play their part to suppress this virus and follow the local restrictions” in a statement.

BREAKTHROUGH: U.K. health authorities have rolled out the first doses of a widely tested and independently reviewed COVID-19 vaccine.

The first recipient was grandmother Margaret Keenan, who turns 91 next week. https://t.co/grcPdP4rrn pic.twitter.com/7oyMKSt9QV

The phased approach to vaccinating the most vulnerable groups first has long been advocated by the WHO, who hope to see countries vaccinate their most vulnerable "at pretty much the same time," according to WHO spokesperson Dr. Margaret Harris.

"So ultimately we hope that we will have quite a few [vaccine] candidates, quite a few options, and that means ultimately that you could probably widen your groups relatively quickly. We want to see it happening around the world at pretty much the same time, and at least getting those most vulnerable groups first. And we calculated that to be about 20% of the population in most countries. That's already quite a large number of people that you need to aim to vaccinate," said Harris.

In the short term, the hope is that mass vaccination of the most vulnerable could lead to a reduction in deaths and a relief for overburdened healthcare systems.

"Certainly we would expect that this would have two great effects," Harris said. "First a reduction in the need for intensive care and in need for hospital beds. So you take the pressure of these extraordinary health workers, some of whom haven't had a day off since their outbreaks began... and secondly, if the people most likely to get sick are not getting sick, they're also not going to die.

"So you'll see a good drop in deaths -- and that would be wonderful. For me, that would be the best Christmas present," Harris added.