The father and daughter captured in a photograph in front of Notre Dame an hour before a massive fire erupted and destroyed parts of the building has been found.

But, the dad has asked to keep their identities a secret.

Brooke Windsor, who took the photo, tweeted on Thursday morning, “The search is over! The photo has reached the dad and family.”

(MORE: Notre Dame Cathedral not just inspiration for the religious, but for countless films)

Windsor relayed that the father asked to remain anonymous in the wake of the tragedy. She shared on Twitter that he thanked her for the photo and that he “will find a special place for it.”

The search is over! The photo has reached the dad & family. He has chosen to remain anonymous in the wake of tragedy, and writes: “Thanks again for that beautiful photo, we will find a special place for it.” Thank you to everyone who has shared the picture and for your kind words

Windsor captured the sweet moment in front of the cathedral on Monday.

“I took this photo as we were leaving #NotreDame about an hour before it caught on fire,” she wrote Monday on Twitter, sharing the picture hours after the historical cathedral went ablaze. “I almost went up to the dad and asked if he wanted it. Now I wish I had. Twitter if you have any magic, help him find this.”

Brooke has thanked social media for their support in finding the father saying, “I knew y’all could do it.”

Since her tweet was posted on Monday, the photo garnered more than 460,000 likes and was shared more than 200,000 times. 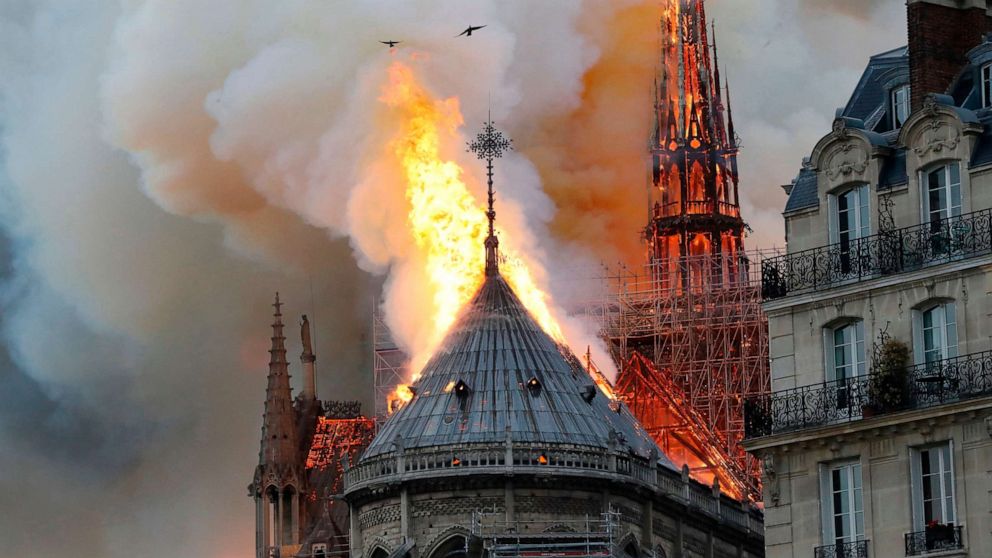 Francois Guillot/AFP/Getty Images
Smoke and flames rise during a fire at the Notre-Dame Cathedral in central Paris on April 15, 2019.

The fire at the Notre Dame has prompted an outpouring of support from people across the world. In the past week, nearly $1 billion has been raised from to rebuild the iconic cathedral, including a total of 300 million euros from French billionaires Bernard Arnault and François-Henri Pinault. A national fundraising campaign is underway from Fondation du Patrimoine, a French heritage organization.