Lady Gaga is a singer, actress, entrepreneur and bonafide fashionista.

During her latest press stops for the upcoming "House of Gucci" film, she's worn everything from head-turning gowns to big, bold color that's hard to miss.

To kick off the movie's array of premieres, Gaga, along with cast members such as Jared Leto and Salma Hayek, came dressed to impress for the red carpet in the U.K.

The "Sour Candy" singer donned a free-flowing, full-on Gucci ensemble that was hard to miss. The dark violet gown featured a pleated texture and an elongated cape straight from the designer's recent Gucci Love Parade show. She also paired it with fishnet stockings and her signature tie-up platform boots.

Following the U.K. premiere, Gaga donned yet another striking look in Milan that included a custom AtelierVersave column gown that had a corset-like top and thigh-high slip at the bottom. She completed the look with beautiful jewels, an updo and red pumps. 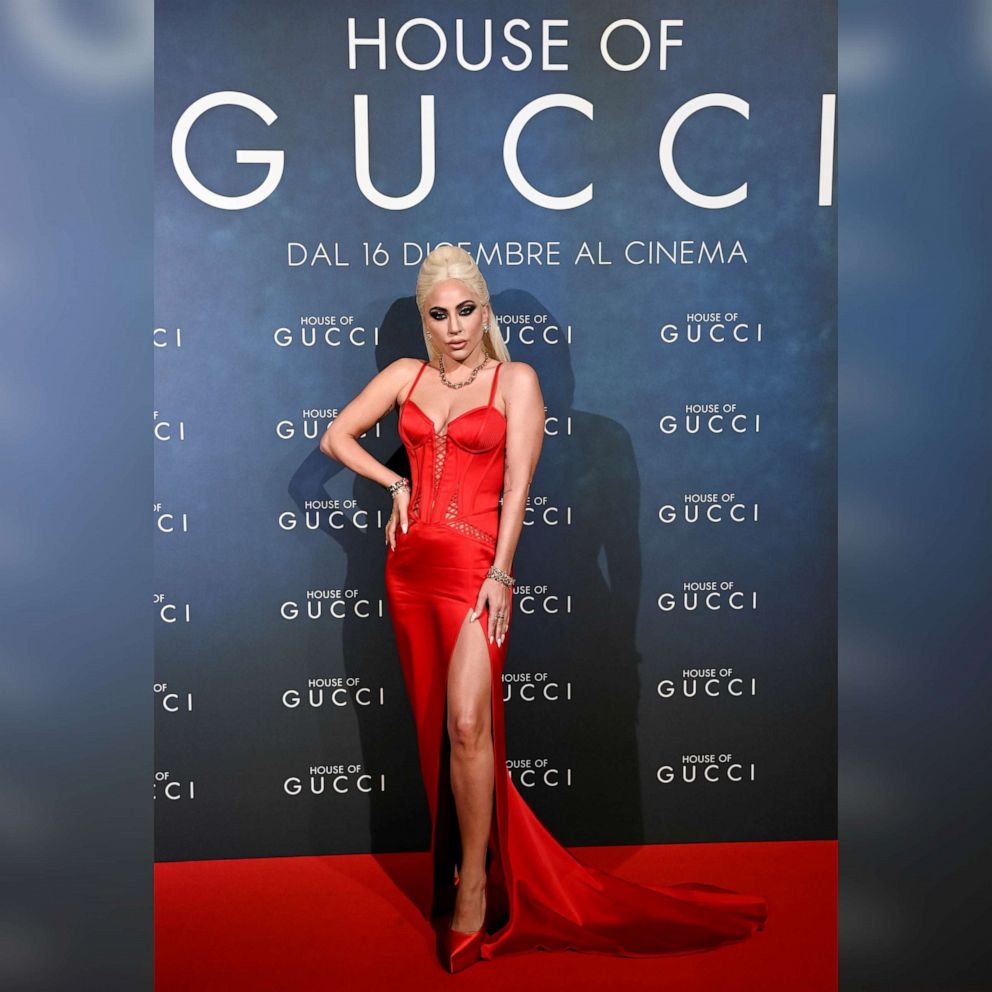 Flavio Lo Scalzo/Reuters
Cast member Lady Gaga poses for a photo as she arrives at the Italian Premiere of the film "House of Gucci" at the Space Cinema Odeon in Milan, Nov. 13, 2021.

"I cried all day doing press in Milan," Gaga said in a post alongside a photo of her striking a pose on the red carpet. "I am so grateful and humbled to be in our movie #HouseOfGucci. Coming Thanksgiving! Father, Son, and tonight…Haus of @Versace."

For the NYC premiere, Gaga wore an alluring custom black dress with a halter-style top and bow at the neckline by Armani Privé. She set the look off perfectly with a bright red lip and smoky eyeshadow. 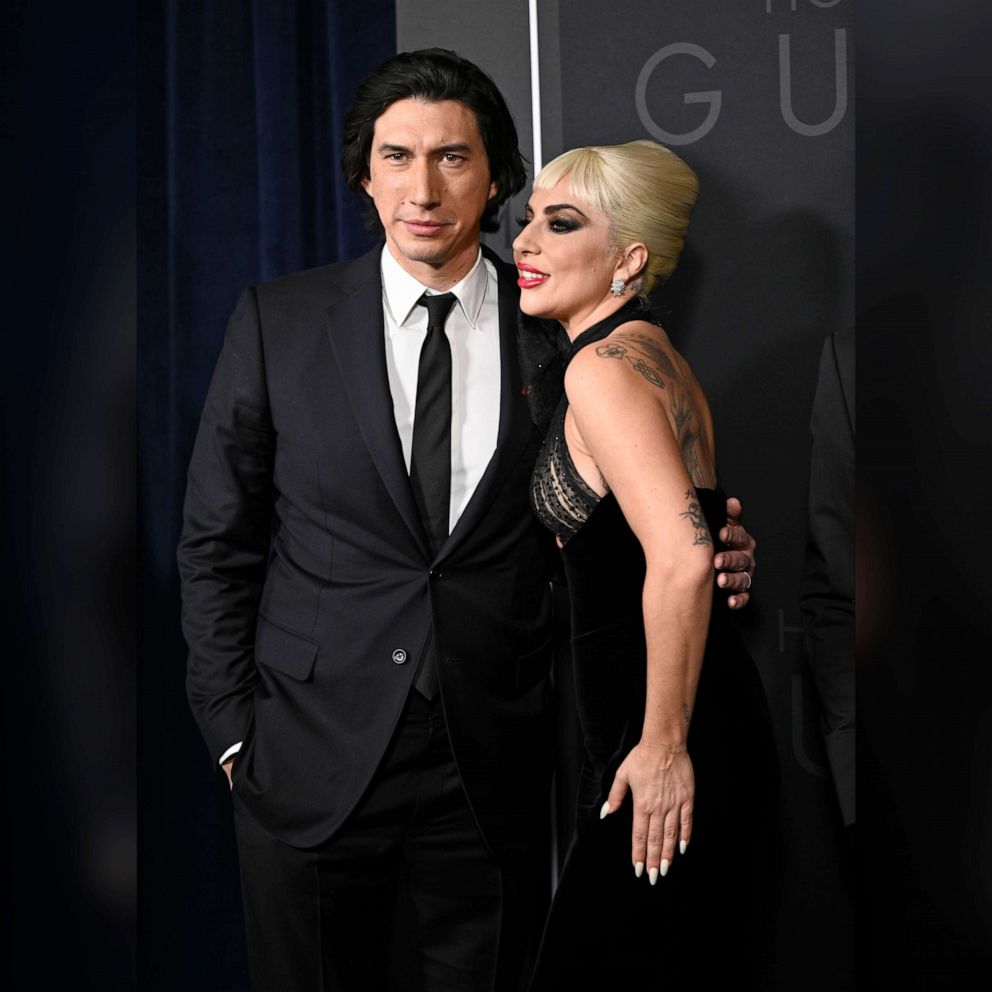 Evan Agostini/Invision/AP
Lady Gaga poses with Adam Driver on the red carpet for the premiere of "House of Gucci" at Rose Theater at Jazz at Lincoln Center on Nov. 16, 2021, in New York.

Days after her New York stop, Gaga brought more glamour to the carpet during the film's Los Angeles premiere. 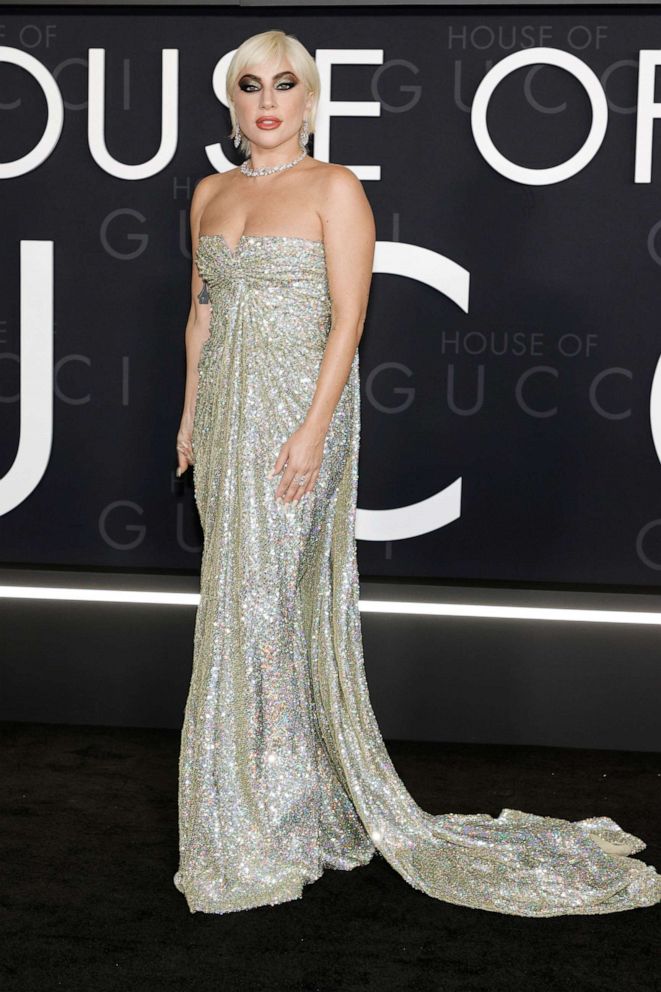 Gaga plays Patrizia Reggiani in the film who was known as an Italian socialite who was convicted of hiring someone to kill her ex-husband who was Italian fashion heir Maurizio Gucci.

In a recent interview with "GMA", Al Pacino praised Gaga for her performance in the film, saying, "She's a great actress, and that's all there is to it."