The popularity of lip filler has been on the rise for years, much thanks to celebrities like Kylie Jenner, who constantly promote the plump lip look. But because the beauty trend has become so common and the procedure so accessible, many people seem to have forgotten that it is, in fact, still a medical procedure that must be taken seriously.

"The omnipresence of medically-enhanced and Instagram filter-enhanced lips and other body parts on social media has led to a false perception that the procedures are easy to perform and carry no risk at all," said Dr. Dmitry Schwarzburg, M.D., of New York City-based clinic Skinly Aesthetics.

Over the past two years, as people -- possibly bored in quarantine during the height of the COVID-19 pandemic -- spent more time on TikTok and Instagram, interest in and conversation around DIY filler and Botox treatments spiked. The hyaluron pen, for example, which can be purchased on Amazon or Etsy, has become one of the most popular tools to self-administer filler, thanks to social media. TikTok even has a #hyaluronpen hashtag where one can find over 65 million videos of people using or speaking about the pen. 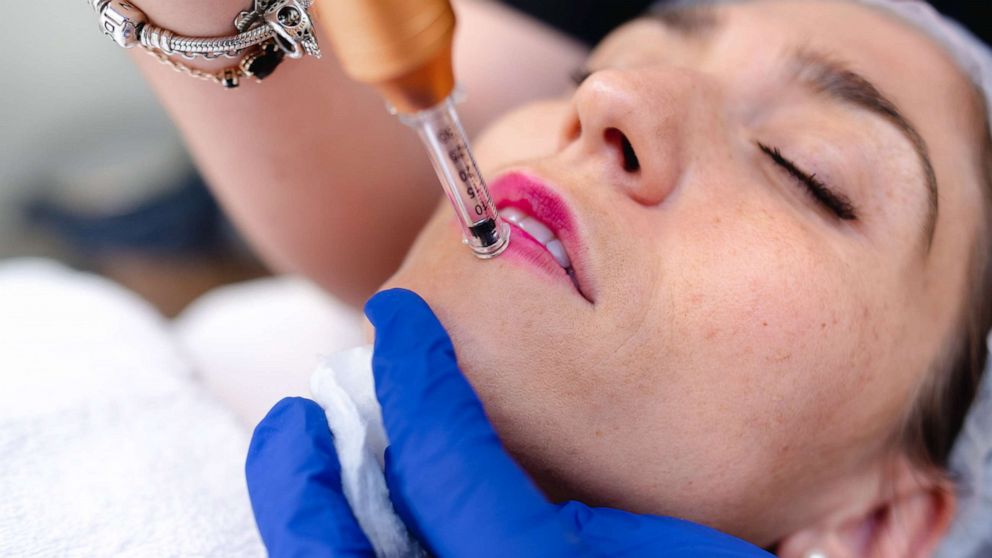 Though at first glance, the tool does seem to work, Schwarzburg said it can cause life-threatening issues, or at the very least long-term damage to the lips. Unlike many other cosmetic procedures, it is not approved by the Food and Drug Administration.

"The hyaluron pen device essentially forces hyaluronic acid into the lips through the skin with very intense pressure," he said. "This results in severe bruising, uneven distribution, lumping, and can cause severe and permanent tissue damage and potential for tissue infarction, secondary to obstruction of the blood vessels."

He added that dermal filler, if desired, should only be applied with a needle, by a trained medical professional, using an approved substance.

Schwarzburg said he believes TikTok, Instagram and YouTube are responsible for the recent popularity of the hyaluron pen, and that unfortunately, many millennial and Gen Z users have bought into it, as they believe it means they can get their cosmetic procedure done at home, without a doctor, for a much lower price. At a reputable clinic, lip filler can cost hundreds, if not thousands, of dollars, whereas a hyaluron pen goes for as little as $40 through an online vendor -- a fact that matters greatly to many, especially those who've lost financial stability during the pandemic and are looking to take the cheaper route when it comes to their cosmetic procedures.

But medical professionals are advising people not to take a more dangerous, though inexpensive, route when it comes to fillers.

MORE: Botox users getting younger after a year of Zoom meetings, doctors say

Stephanie Magana, 26, visited Skinly Aesthetics to get her lip filler dissolved after a different clinic used the hyaluron pen on her and left her with what she described as "white bumps all over my lips."

She said she found the clinic on Instagram, and though "some of the results didn't look so bad," but as soon as the aesthetician administered the filler through the pen, she said she saw her lips swell up, bruise and develop strange bumps.

The clinic she went to did not answer ABC News' request for comment.

"You don't really think about it as being as scary, because it's a pen," she said, explaining that she chose to try out the pen because she initially thought it was safer and less invasive than a syringe.

After more than a week, with the bumps still not gone, Magana went to Schwarzburg, who dissolved the existing filler and injected her with FDA-approved Juvederm, to give her her desired results.

Schwarzburg said Magana is just one of many patients who've come to him this year with "botched filler" caused by unexperienced injectors.

What exactly is filler, and is it safe?

Fillers are often biodegradable substances that can be injected into or just below the skin. Hyaluronic acid -- which is what most lip fillers are made up of -- is a polysaccharide that is naturally produced by the body, and the filler works because when injected into the lip, it absorbs water from the body, "like a dry sponge thrown into water, which then creates volume and focal sterile inflammation," Schwarzburg said.

Juvederm Ultra, Juvederm Voluma, Restylane Lyft and Revanesse tend to give more volume to the injected area, according to Schwarzburg, while Juvederm Volbella, Restylane Kysse, RHA fillers and Belotero are more subtle in their volume creation. These types of FDA-approved fillers are all often used by trained professionals to achieve volume in the lips and face. 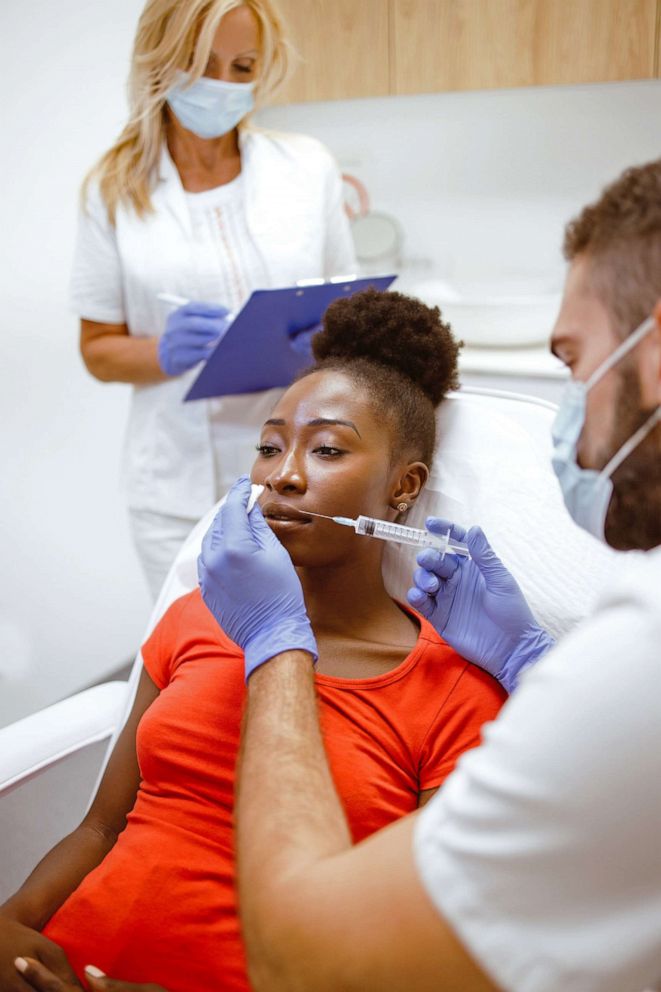 Ika84/Getty Images
A woman receives hyaluronic filler injection treatment on her lips in this stock image.

"If injected properly, they essentially have a 100% safety profile," Schwarzburg said, adding that some people can develop an allergy to the product, but that is rare and true of any injectable. Correctly administered fillers tend to last 6-15 months.

"As far as the technical aspect is concerned, the most dreaded complication is vascular occlusion, if the filler is inadvertently injected into one of the smaller branches of the facial artery, which if left unnoticed would lead to tissue necrosis, scarring and deformation," Schwarzburg said, that's why it's so important that if a person is looking to get lip filler, they go to a trained expert who understands the human anatomy and the depths of the injections.

The qualifications of who can inject a patient with lip filler vary by country and by state, but in New York, doctors, physician assistants and nurses under the supervision of a doctor can legally administer it, Schwarzburg said.

Earlier this month, the FDA issued a warning about the use of the hyaluron pens.

"Today, the FDA is warning the public and health care professionals not to use needle-free devices such as hyaluron pens for injection of hyaluronic acid or other lip and facial fillers, collectively and commonly referred to as dermal fillers or fillers," their statement, published on their website, reads. "Patients and healthcare providers should know that FDA has not approved any dermal fillers for over-the-counter sale for at-home use or for use with needle-free injection devices. These unapproved needle-free devices and fillers are often sold directly to customers online, bypassing consultation with a licensed health care provider, a critical safety measure for patients to make informed decisions about their personal health." 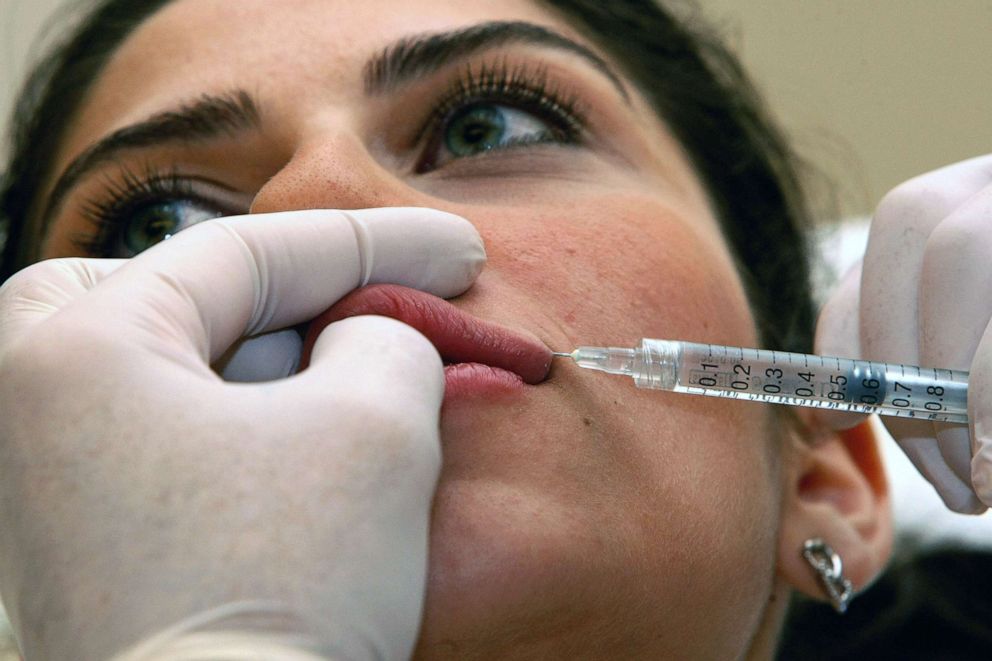 Anwar Amro/AFP via Getty Images, FILE
A plastic surgeon injects filler liquid into the lips of a patient at his clinic in Beirut, June 25, 2009.

It also said it is monitoring online platforms promoting these devices.

"We also want patients and providers to be vigilant by understanding which products have been approved by the FDA and the dangers of using unapproved products, some of which may be irreversible," they said. "The FDA will continue to alert the public and take additional actions as necessary in order to protect public health."

How to put a stop to this trend

Schwarzburg said that while he and other medical professionals are glad millennials are helping destigmatize safe cosmetic medicine by opening up about their experiences and procedures on social media, that openness has unfortunately also helped spread misinformation about the field as a whole, and essentially caused this potentially risky DIY filler trend.

The solution? Do your research, read the FDA guidelines, don't take the cheap route when it comes to altering your appearance and don't fall for the fake doctors who make these kinds of procedures appear safer and easier than an actual medical procedure, Schwarzburg said.

"I don't think that this trend will last very long, as eventually people will come to realize that the whole thing is a dangerous scam, similar to the suction lip enhancements or suction butt enhancements that were trendy a few years ago, that are now joked about on the internet due to the ridiculous results that people were getting," he added.