By Katie Kindelan
Video by Will Linendoll, Nidhi Singh, Trinity Joseph
Share —
Sign up for our newsletters to get GMA delivered to your inbox every morning!

Barnes, who gave birth to her second child, a daughter named Capri, six months ago, took time during halftime of the game to pump breast milk for her daughter, according to ESPN sideline reporter Holly Rowe.

Rowe reported that Barnes came back onto the court after halftime a few minutes after her team because she was pumping breast milk. 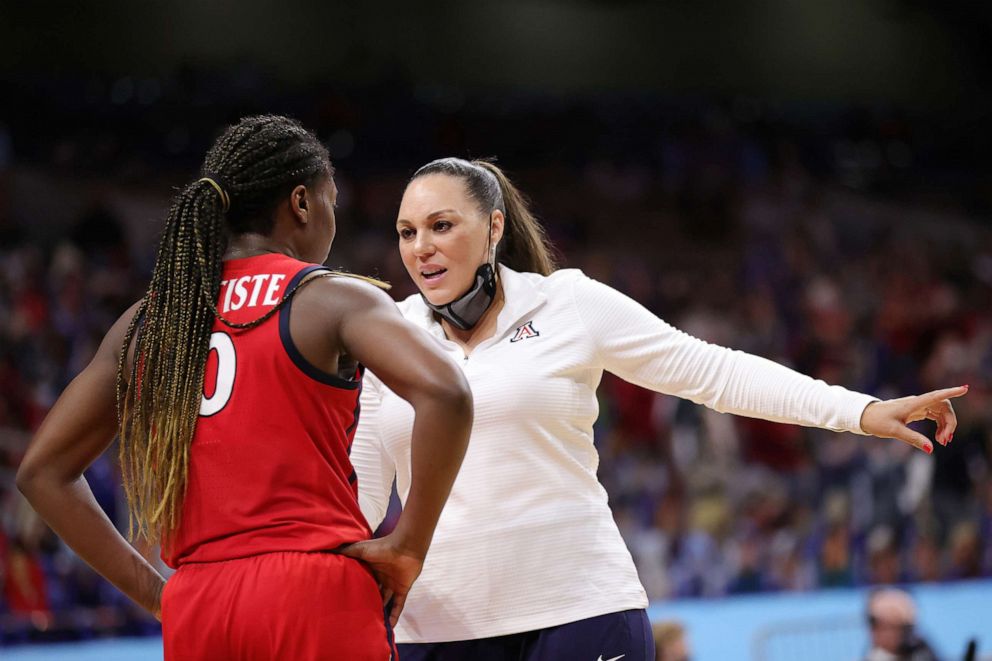 Carmen Mandato/Getty Images
Head coach Adia Barnes of the Arizona Wildcats talks with Trinity Baptiste in the National Championship game of the 2021 NCAA Women's Basketball Tournament against the Stanford Cardinals at the Alamodome on April 04, 2021, in San Antonio, Texas.

"She is doing it all," Rowe said. "And for those who think this is too much information, I'm just going to tell you this. Let's normalize working mothers and all that they have to do to make it all happen."

"Let's normalize working mothers and all that they have to do to make it happen." 🗣️🗣️🗣️ @sportsiren's report on Arizona head coach Adia Barnes pumping at halftime of the national championship. pic.twitter.com/xainGkoCKl

Barnes, whose daughter Capri is 6 months old, spoke herself after Sunday night's game in San Antonio about what it has been like for her to balance being a mom to a newborn and a head basketball coach.

MORE: Breastfeeding basics: All of your questions answered

"I had a baby right when season started and took like a week off. It says I took a month off but I did not," she said. "I was on Zoom calls four days after having a C-section so it was hard, but my team loved on me. I missed a couple of weeks, I got a little sick, they fought for me. I came back. They were patient. I'm happy."

This is powerful from Adia Barnes 👏 @espnW pic.twitter.com/Bih5hKaVPc

Barnes went on to talk about how she leans on "a village" to help her balance motherhood and career.

"I represented moms, I have a baby here. I hear her crying ready to feed," she said. "I represent moms, you can be a coach, you can do it at an elite level. You just have to have a village like I do. I represent Black females, don't get here too often and don't get opportunities. But I had an opportunity today on the biggest stage and represented a lot."

Last week, Barnes made history as one of two Black head coaches in the women’s Final Four.

Barnes' team, the Arizona Wildcats, lost in the championship game Sunday to Stanford, 53-54.

MORE: This employee got Walmart to expand breastfeeding stations in stores across the country

The head coach though received praise on social media for being outspoken about the realities of being a working mom.

Arizona coach Adia Barnes shot double birds to the haters after beating UConn and, per ESPN's Holly Rowe, pumped breastmilk for her baby at halftime of the national championship game.

She's a badass in every conceivable way.

Adia Barnes was late coming out of the locker room because she was pumping breast milk for her baby during halftime. She’s doing that while getting ready to coach the 2nd half of the #NationalChampionship game. Women are freaking amazing man!

Barnes played college basketball for the University of Arizona Wildcats and then went on to a career in the WNBA. She became Arizona's head coach in 2016.