A California couple has filed a lawsuit claiming they got a wrong embryo and gave birth to a baby that was not theirs.

"This is such a preventable mistake," Daphna Cardinale told "Good Morning America." "It should never have happened."

Daphna Cardinale and her husband, Alexander, say in the lawsuit, filed Monday in Los Angeles, that they went through in-vitro fertilization two years ago and became pregnant with a baby girl.

According to the complaint, the Cardinales were unknowingly pregnant with a stranger's biological child due to their embryo being mixed up with another couple's.

"Both embryos were inserted into the wrong women," the lawsuit states. "In other words, Daphna was surgically implanted—against her will or knowledge—with the sperm and egg of a man and woman who were complete strangers to her. Meanwhile, Daphna and Alexander’s embryo was transferred to that same couple, Couple Two, a few weeks after Daphna’s transfer procedure."

Alexander Cardinale told "GMA" that when his wife gave birth in September 2019, he felt like something was not right.

"I just didn't recognize her," he said of his newborn daughter. "She didn't look like either of us."

The couple, already parents to an older daughter, Olivia, said they shrugged off their suspicions at first, but eventually ordered a DNA test. 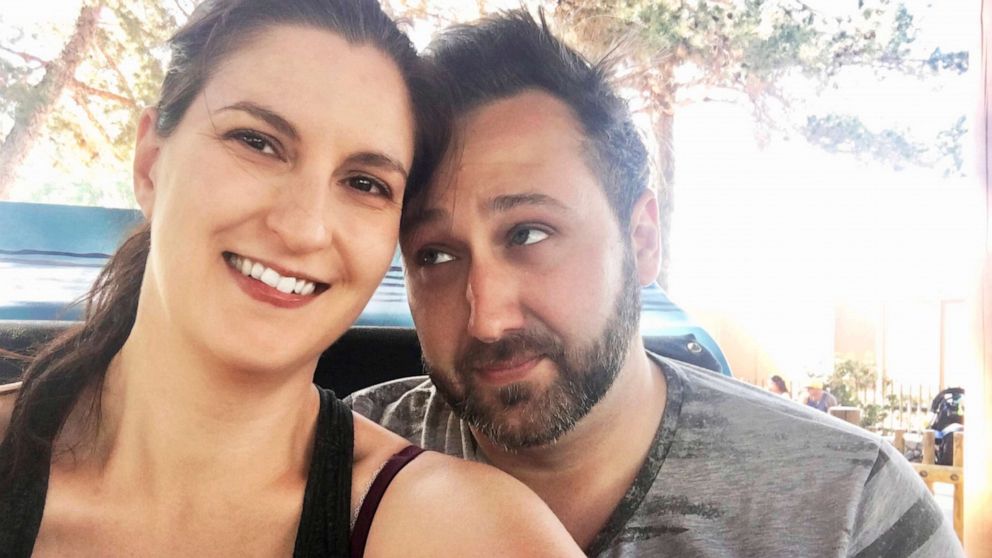 Peiffer Wolf Carr Kane & Conway via AP
Daphna and Alexander Cardinale pose together in an undated photo proved by Peiffer Wolf Carr Kane & Conway law firm. They are one two California couples who gave birth to each others' babies after a mix-up at a fertility clinic, and spent months raising children that weren't theirs before swapping the infants, according to a lawsuit filed in Los Angeles, Nov. 8, 2021.

"I didn't want to do a DNA test," said Alexander Cardinale. "I was having these doubts and pushing them down, but I was also so in love with our daughter, so it was an impossible situation."

According to the complaint, after the first test results were inconclusive, the Cardinales [said they] took a second DNA test that confirmed their worst fears.

The second DNA test, according to the couple, showed there was a 99.9% chance that neither of them was genetically related to the baby.

"That night after everyone's in bed sleeping, we finally broke down and we were like, 'Wait a minute. What happened?,'" said Alexander Cardinale. "If she's not ours, where is our embryo?"

The couple said they also feared losing the baby they had carried through pregnancy, given birth to and raised for the first several months of her life.

"We had this baby and she was perfect," said Daphna Cardinale. "We were in love with her and I was just so scared that we were going to lose her."

The Cardinales said they obtained a lawyer and after a weeks-long investigation discovered that another family had given birth to their biological child.

"Somehow they saw a picture of our older daughter and they saw this baby and they're like, 'They look really similar, so there's a good possibility that she's yours,'" recalled Daphna Cardinale. "So everybody took DNA tests."

"We'd missed the whole pregnancy. We missed the birth. We missed the newborn period, so we wanted to know as much about that as possible," said Daphna Cardinale. "So we were really filling each other in on what we had lost and getting to know each other a little bit as well."

After several months of spending time alone with each baby, the Cardinales said they and the other couple, who declined to speak to ABC News, decided jointly to return each baby to their biological family.

The Cardinales said they became the full-time parents of their biological daughter, named Zoey. 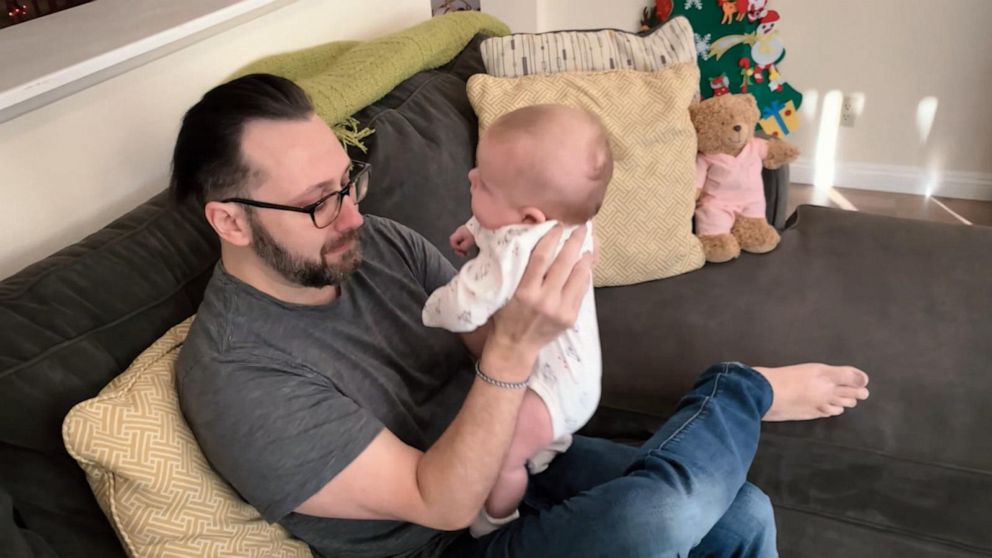 "With my birth daughter, I knew her, I carried her, I nursed her for her whole life," said Daphne Cardinale. "But Zoey I didn't know. I didn't know what she felt like, what she smelled like. I was trying to learn her really quick but I wasn't familiar."

The Cardinales' lawsuit says the "long-term consequence" of the baby swap "continue to haunt their entire family."

"Daphna and Alexander’s pain and fear have not abated with their reunion with their daughter. This is something they will live with for the rest of their lives," the lawsuit states. "Both they and their older daughter have suffered life-changing emotional damages, necessitating continuing mental-health treatment. Daphna and Alexander’s distress has manifested in severe physical-health problems, too, with which they continue to struggle."

The couple is suing the California Center for Reproductive Health and their doctor, Dr. Eliran Mor, whose lab the Cardinales claim in the lawsuit mixed up their embryo with the other couple's.

MORE: Olympian's widow gives birth to his daughter via IVF

"We're in the wild west of the American fertility industry," the Cardinales' attorney, Adam Wolf told "GMA." "There are virtually no regulations. There are more regulations that pertain to barbershops and nail salons than to fertility clinics."

"When errors happen in the fertility industry, it has life-changing consequences for the people involved," he added.

The California Center for Reproductive Health and Mor did not respond to ABC News' request for comment.

The Cardinales said they are now doing their best to forge a larger family with the other parents and their birth daughter, and continue to see her as often as once a week. 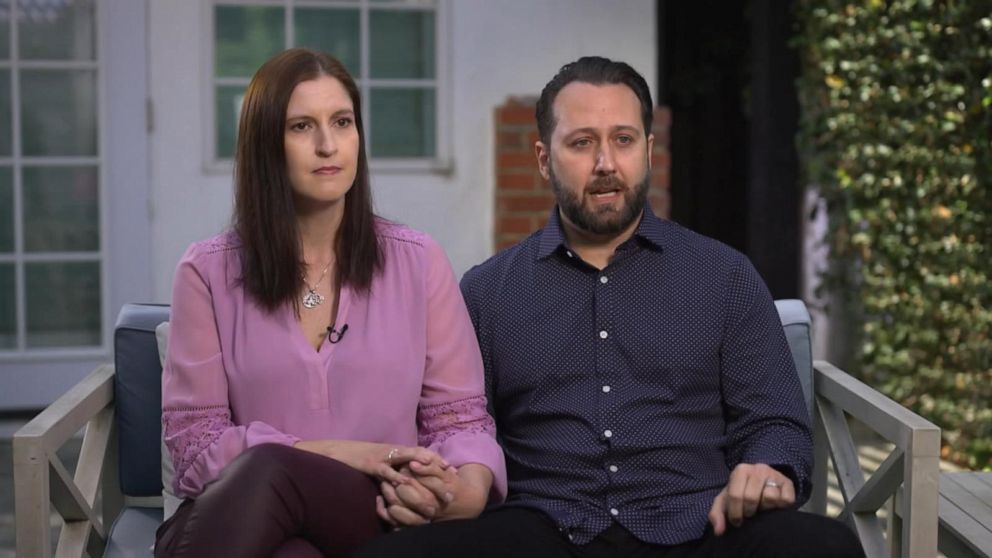 "I carry around guilt all the time for giving away a child that I really wanted and was perfectly capable of taking care of, even if I gave her to her own family, even if it's not rational," said Daphna Cardinale. "I carry around a lot of guilt for not recognizing Zoey when I met her and having to play catch up, but at the end of the day, all we can do is go forward the best we can."

"I want people to know that it is possible to test after you're pregnant to make sure that you are the biological parent of the child you're carrying," she said. "It is possible to have those tests. Just talk to your doctors about it."