A 5-year-old girl's wish to write and record her own podcast has been granted.

Now, Azka Sharief's 5-minute mystery story, "The Stealer of the Diamonds," has 3,500 plays on SoundCloud since being posted days ago.

"She is super duper happy about it," mom Fatima Sharief of Des Plaines, Illinois, told "Good Morning America." "She really enjoyed all the fan mail and even told me to reply and [write] 'You are my number one fan.' Someone in her class wanted an autograph. She's enjoying every bit of it."

Fatima Sharief
With help from her sister Afifa Sharief, 11, Azka's dream came true and she worked on a podcast at local NPR station WBEZ-FM.

Azka's school nurse put her and her family in touch with Make-A-Wish Illinois who introduced the girl to staff at local NPR station WBEZ-FM where she worked on the podcast, Sharief said.

The episode begins with an introduction from Azka, along with upbeat music followed by suspenseful sound.

“My name is Azka, Azka Sharief," Azka can be heard saying in her adorable voice. "And I am doing a podcast on a story I wrote. The name is “The Stealer of the Diamonds.”

Azka and her sister Afifa Sharief, 11, who is an editor on her school's TV show, practice podcasts at home by using an app on their mother's phone, Sharief said.

When Azka knew she was about to "make a wish," she drew a picture of a microphone and an audience and said she wanted to record a real podcast.

Her dream came true on April 10.

"She did the whole podcast in one take," Sharief said. "I'm proud of both of my daughters. Myself and my husband are both engineers and we are looking forward to the next generation of creativity."

Jessica Miller of Make-A-Wish Illinois, said this was the first podcast wish the organization has granted. 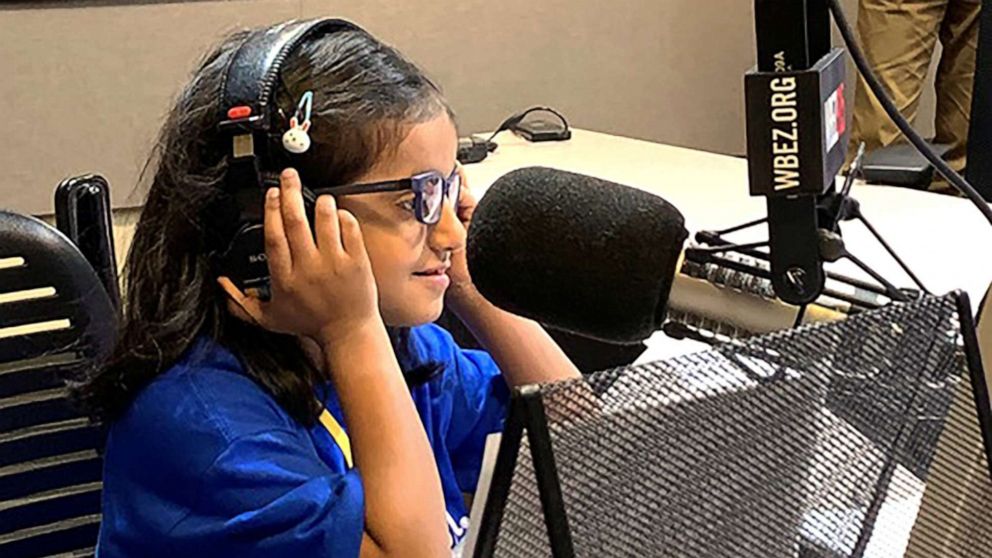 Fatima Sharief
Azka Sharief's 5-minute mystery story, "The Stealer of the Diamonds," has 3,500 plays on SoundCloud after only a few days of being posted online.

"The enjoyment and energy from everyone involved has been wonderful," Miller said, adding that Illinois grants over 700 wishes each year for local children with Make-A-Wish granting more than 15,000 wishes for children with critical illnesses in the U.S. every year.

The second part of Azka’s wish is to get feedback from listeners through her email, AzkasWish@gmail.com.