At just 15 years old, Coco Gauff has become a household name in the tennis world after becoming the youngest qualifier in history to make the main draw at Wimbledon -- and the youngest woman to win a Wimbledon match in nearly 30 years.

At her first round match at the Grand Slam tournament last month, the teen defeated one of her tennis role models, five-time Wimbledon champ Venus Williams.

"I feel it's harder to kinda wrap my head around it because I just looked up to her for so long," Gauff told ABC News' Robin Roberts. "Sometimes I'll tell my dad like, 'I got to play Venus. Can you believe it?' So to me, it's crazy." 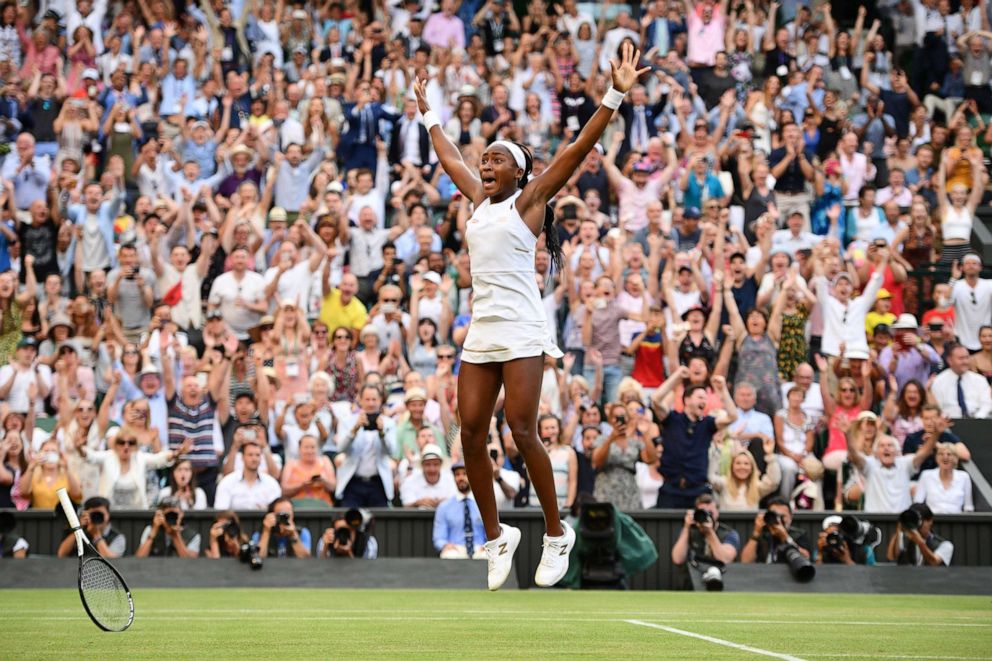 Daniel Leal-olivas/AFP/Getty Images
US player Cori Gauff celebrates beating Slovenia's Polona Hercog during their women's singles third round match on the fifth day of the 2019 Wimbledon Championships at The All England Lawn Tennis Club in Wimbledon, southwest London, on July 5, 2019.

The high school student from Florida said she is still adjusting to the newfound fame after her performance at Wimbledon.

"It was crazy because growing up, I just thought about winning tournaments and playing Wimbledon and the Grand Slams, but I never thought about all that would come with it," she said. "So I guess I kinda didn't really prepare myself for it ... I'm still getting used to it."

Back home in Delray Beach, Gauff is back to work preparing for the U.S. Open.

She recalled the first time she picked up a tennis racket at the tender age of 6. 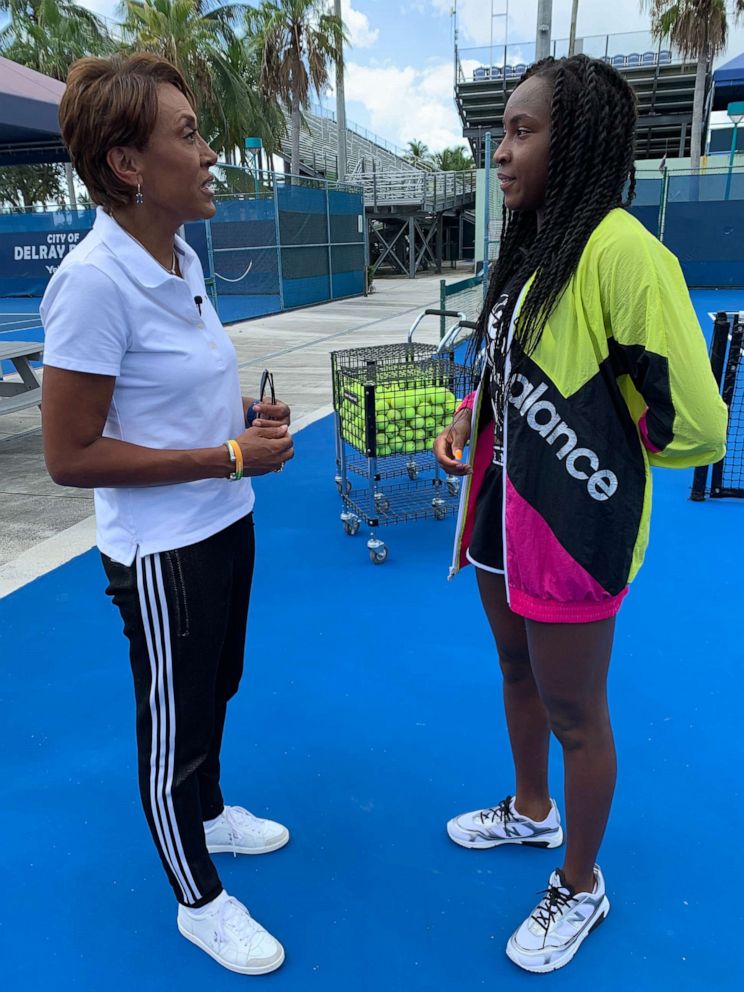 "I was at home when we lived in Atlanta, and the earliest tennis memory I remember is just me hitting against the garage," she said. "I guess -- that's how I started."

Despite garnering international attention for her performances on the court, Gauff said she is always focused on how she can improve her game.

"I always, like, try to push myself," she said. "I know that I'm doing well. But I don't tell myself, 'oh, I'm pretty good I think,' 'cause I think I can always improve."

Gauff said that she is also always focused on winning when she competes.

In many ways, her years of hard work and dedication are a family affair -- her father, Corey Gauff, is one of her coaches and her mother, Candi Gauff, manages her schedule.

"They always fight over who ... like, gave me the gifts," Gauff quipped. "My dad says I got the height from him. My mom says I got the legs from her and the speed from her. But then he argues that the speed is from him."

Corey Gauff told "GMA" that "as former athletes you look at the things that you could have done better." 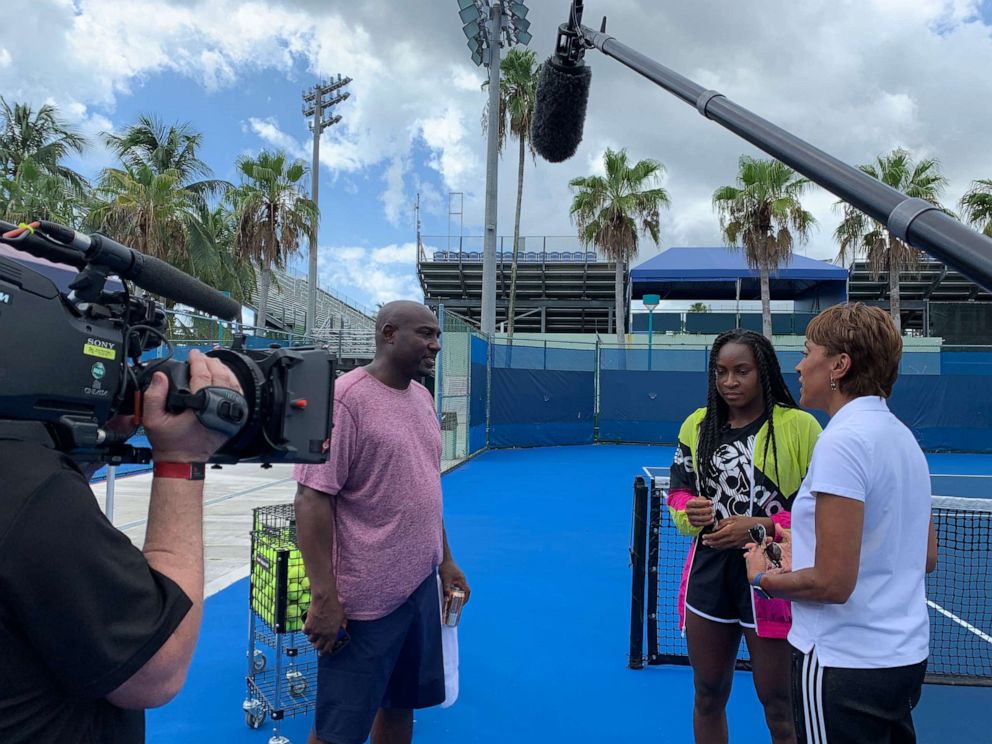 "So it gives you a chance when you have children to say, 'Okay, these are some of the things I probably wouldn't have done and so I want make sure you don't do those things,'" the father explained. "And I think that's why she's able to be successful, because we always tried to give her the very best that we can afford so ... if she decided not to play again, fine."

"We'd be satisfied that we did our very best to give her the best opportunity to be successful," he added.

Mom Candi Gauff also shared her advice for fellow sports parents, whether they are at her daughter's competitive level or in little league.

"My biggest thing with her is to be grateful, be grateful that you have the opportunity ... to play," she said. "You have to be grateful and appreciative when you're out there on that court and be humble."

"So my biggest advice to parents is be appreciative that you are able to cheer your child onto victory or in defeat and be able to hug them if they lose," she added.

For Coco Gauff's proud grandparents, Eddie Odom Jr. and Yvonne Odom, watching her rise has been a thrill and a joy.

"Oh, I can't believe it. I was teasing Coco. I said, 'Look, G-ma can live off just the crumbs from your table,'" Yvonne Odom told "GMA."

Eddie Odom Jr. added that he just tries to support his granddaughter as best he can.

"As far as I'm concerned ... the mom and the dad ... have made some really good decisions, and I know that. So whatever they're asking me to do, I'm willing to do it," he said. 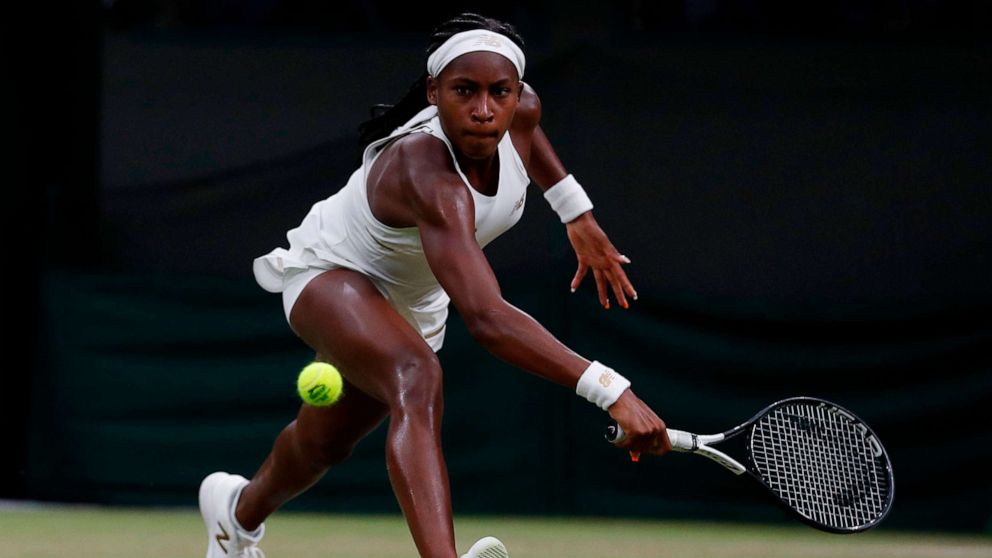 Adrian Dennis/AFP/Getty Images
US player Cori Gauff returns against Slovakia's Magdalena Rybarikova during their women's singles second round match on the third day of the 2019 Wimbledon Championships at The All England Lawn Tennis Club in Wimbledon, southwest London, on July 3, 2019.

Coco Gauff said she hopes to make a difference in the world on and off the court.

"My tennis dream, I guess, is to be the greatest of all time," she said. "My dad always told me that ever since I was a little girl that one day I will change the world with my racket. So I hope that one day I can do that, and I'm already thinking of ideas on how I can."

Off the court, Gauff said a "big focus for me is mental health."

"I think I want to push that more I guess, especially now. On social media it's a little bit, I guess, toxic," she said. "So I think that especially being young that it's important that people kind of recognize it that it's an issue." 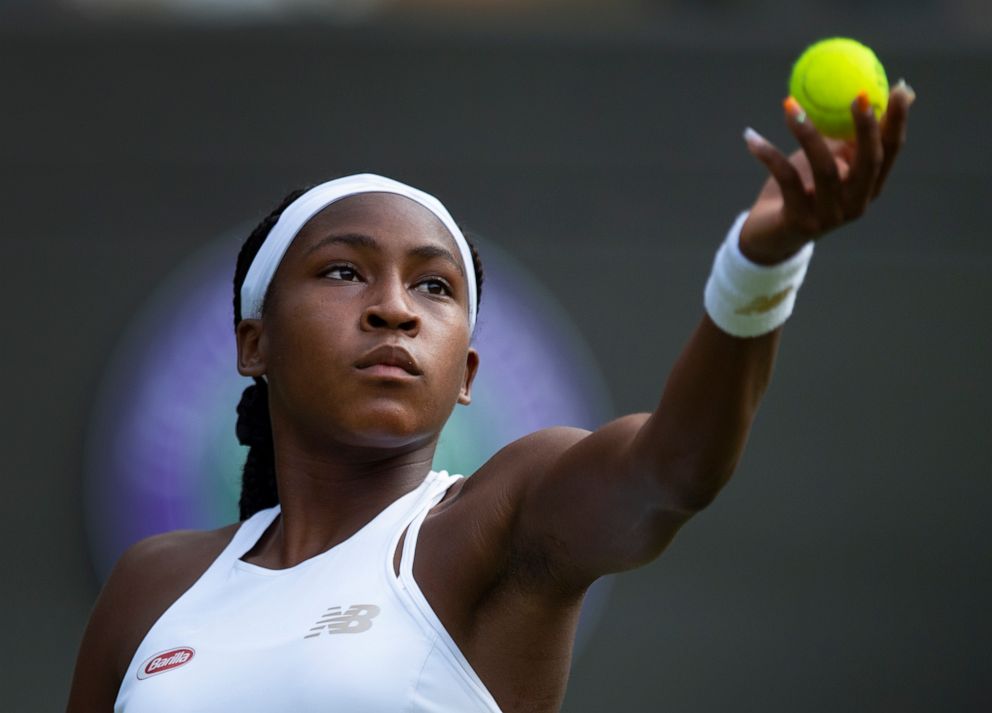 Visionhaus/Getty Images
Cori Gauff of USA in action during her first round victory over Venus Williams of USA on Day One of The Championships - Wimbledon 2019 at All England Lawn Tennis and Croquet Club on July 1, 2019 in London, England.

Gauff said she hopes her story inspires others when they watch her play.

"I just want them to feel that anything's possible and that, like, honestly, the sky's the limit," she said.

"Actually no, the sky isn't the limit. You can go as far as you want," she quipped. "I think that anything is possible at any age or any point in time of your life."