The first action-packed trailer for "Jurassic World Dominion" is here -- and it's a doozy.

Not only does it reunite original "Jurassic Park" stars Sam Neill, Laura Dern and Jeff Goldblum, but it also has them joining Chris Pratt and Bryce Dallas Howard as dinosaurs roam freely in our human world.

The preview begins with the voice of the late Richard Attenborough's Dr. Hammond from 1993's "Jurassic Park" talking about why he played God to bring dinosaurs back to life in an amusement park for humans.

The only problem? "Life finds a way," as Dr. Hammond says.

One scene has a herd of dinosaurs running free like mustangs on snow-covered plains; eventually we see Pratt's Owen Grady on horseback, herding them as they run. 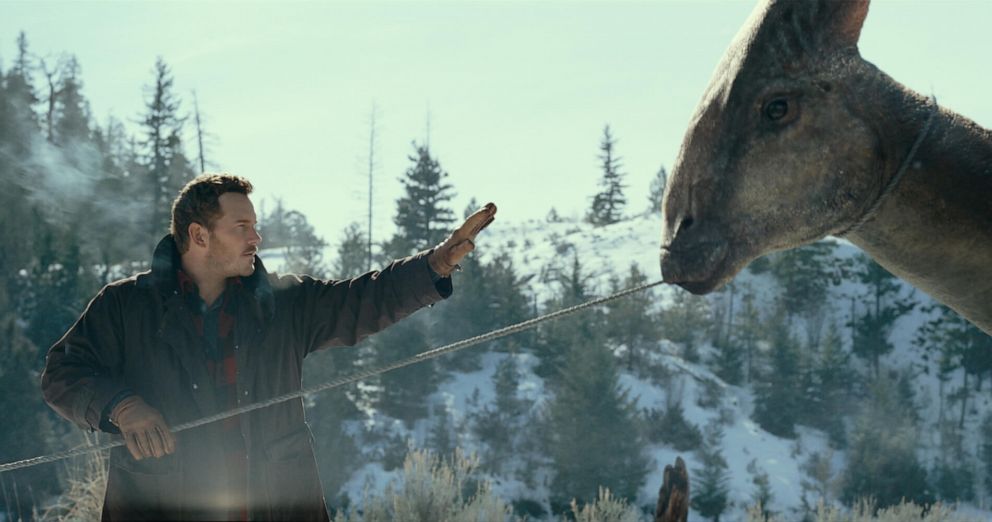 Grady later tries to convince Howard's Claire Dearing to help him protect their raptor pal Blue and her baby. "Humans and dinosaurs can't co-exist," she insists. "We created an ecological disaster."

As the preview progresses, it becomes obvious that the situation is out of control, and who better to tap to help than Neill's Dr. Alan Grant, Dern's Dr. Ellie Sattler and Goldblum's Dr. Ian Malcolm?

"We not only lack dominion over nature," Malcolm notes later in the trailer, "we're subordinate to it."

As proof, we see our heroes being stalked, all over the world, by all manner of dinosaurs. One shot shows Grady and Dearing on a plane that's attacked mid-air by a giant pterodactyl.

Another scene shows our heroes, both new and old, in the crosshairs of a massive dinosaur. "Don't move," Grady and Grant say in unison, in a callback to the 1993 original.

"Bigger?" Malcolm asks. "Why do they always have to go bigger?"