Athletic power trio Russell Wilson, Megan Rapinoe and Sue Bird kicked off the 2020 ESPY Awards on Sunday with a powerful speech about the Black Lives Matter movement, calling for unity against racial injustice.

"Our country's work is not anywhere close to done. We need justice. We need true leadership. We need a change and we need it now," said Wilson, the Seattle Seahawks quarterback who served as ESPYS co-host.

"This is our moment to prove that we know a better world is one where Black lives are valued."@DangeRussWilson, @S10Bird and @mPinoe open the 2020 #ESPYS. pic.twitter.com/ntJzgtkhMq

"It's important that we keep this dialogue going and this energy alive because for centuries there have been fights for justice and equality in this country led by Black people. But for white people, this is the breaking point. This time, we've got to have their backs. ... No one deserves white privilege. It's not something we earn," said Rapinoe, who plays for the United States women's national soccer team.

"And not just for a few days or a few IG posts, this is our moment to prove that we know a better world is one where black lives are valued," said Bird.

Wilson, Rapinoe and Bird, who teamed up to virtually co-host, encouraged their peers to use their own voice to demand change.

"To my white teammates and friends, we need you to lead too. Don't just listen, help," Wilson said.

"I used to shy away from moments like this because it's convenient to be quiet. To be safe and polite. Colin Kaepernick never shied away. He knew that discomfort was essential to liberation. ... Our return can't just return to business as usual," Bird, who plays for the WNBA's Seattle Storm, said. "Our return is our turn to make things right." 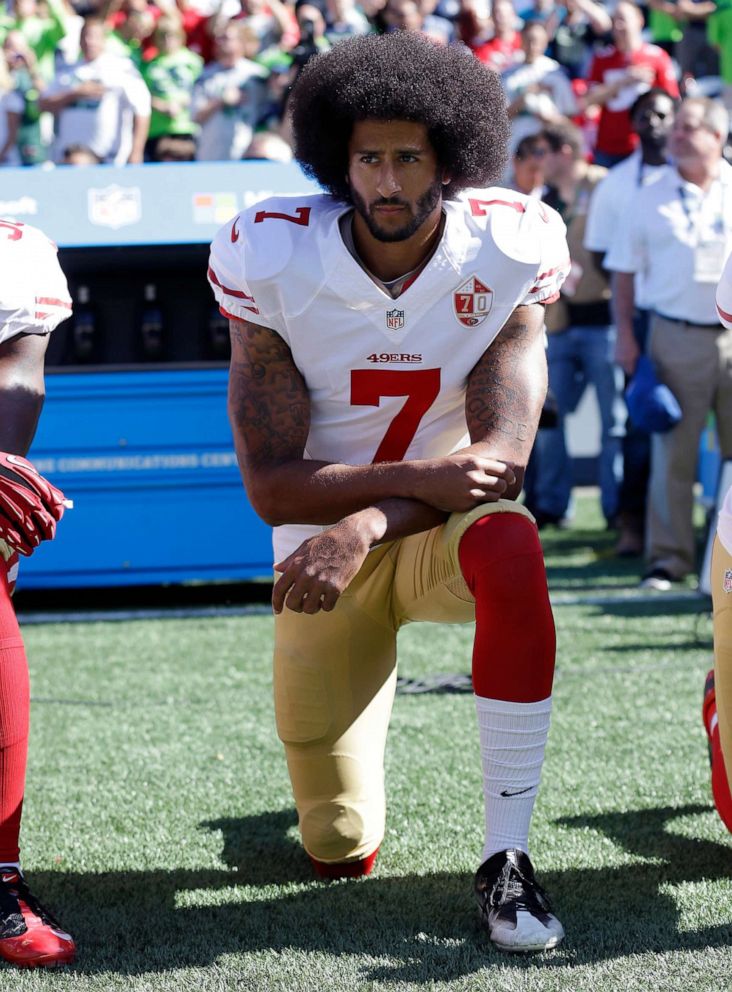 Ted S. Warren/AP
San Francisco 49ers' Colin Kaepernick kneels during the national anthem before an NFL football game against the Seattle Seahawks in Seattle, Sept. 25, 2016. The NFL, which has raised $44 million in donations through its Inspire Change program, announced the additional $206 million commitment on June 11, 2020. Kaepernick and others began kneeling during the national anthem in 2016 to protest social injustice and police brutality. He has not found an NFL job the last three seasons.

Bird added: "Trust us, we know that sports are important. It's why we're gathered here tonight. But do black lives matter to you when they're not throwing touchdowns, grabbing rebounds, serving aces?"

The powerful speech, which included a moving tribute that memorialized George Floyd, Breonna Taylor and Ahmaud Arbery, was one of many powerful moments focused on unity, change and racial justice at this year's ESPYS.

Celebrating stories of courage and resilience

For the first time in its 28-year history, the ESPYS, held virtually amid the coronavirus pandemic, celebrated "narrative" awards amidst shortened and postponed athletic seasons. The night was filled with incredible stories of bravery.

These "narratives" amplified stories of courage and resilience from the likes of boxing champion Kim Clavel, who left the ring to return to work as an overnight nurse amidst the coronavirus pandemic, and Taquarius Wair, the running back given just a 20% chance to live after surviving a devastating house fire when he was just 4 years old. Wair received the Jimmy V Award for Perseverance.

Taquarius Wair wouldn't allow tragedy to stop him from playing the game he loves.

Today he's playing college football and is the winner of the Jimmy V Award for Perseverance. #ESPYS pic.twitter.com/6pDLYeqknb

"Boxing will come back, but I can say that the pandemic is my main event. And I can say it;s the hardest fight I have," said Clavel, who accepted the Pat Tillman Award for Service.

Kim Clavel was on the verge of a boxing breakthrough, but when the coronavirus pandemic struck, she put one career aside for another.

Tonight, she accepts the Pat Tillman Award for Service at the #ESPYS. pic.twitter.com/PZk8Sctxs8

The night turned somber when Snoop Dogg paid tribute to the late NBA All-star Kobe Bryant in a musical performance.

"This is your city. Much love for the ride," the Los Angeles native rapped for the former Lakers star.

From one LA legend to another, gone too soon.@SnoopDogg pays tribute to Kobe 💜🐍💛 pic.twitter.com/9X2P1ldoQC

NBA All-Star Kevin Love was honored with the 2020 Arthur Ashe Courage Award for his inspirational advocacy for mental health and wellness. The Cleveland Cavaliers star has been an outspoken advocate for mental health since revealing his own struggle with panic attacks in 2017, according to ESPN, and has since worked to de-stigmatize mental health through his foundation.

"I accept this award as both an honor and a challenge," Love said. "A challenge to not only continue on my path, but to push beyond it."