Rapper 21 Savage sat down with "Good Morning America" for his first interview one day after he was released on bond from Immigration and Customs Enforcement custody on Wednesday.

The rapper, whose full name is She'yaa Bin Abraham-Joseph, was asked by ABC News' Linsey Davis if he's concerned that he could be deported.

"Yeah, but I feel like I done been through so much in my life, like, I learned to embrace the times when I'm down 'cause they always build me up and take me to a new level in life," he said.

"So it's like even if I'm sitting in a cell on 23-hour lockdown, in my mind, I know what's gonna come after that. So I'm not happy about it. But I'm accepting of it," he added.

(MORE: 21 Savage released on bond by Immigration and Customs Enforcement)

ICE spokesman Bryan Cox told ABC News in a phone interview on Thursday ICE doesn't adjudicate cases and that the decision to release the rapper on bond is in the hands of the immigration courts.

"All I can say is, ICE is a law enforcement agency and ICE respects the decisions of the courts," he added.

In the exclusive interview, which airs on "Good Morning America" Friday morning, the Grammy-nominated rapper reflected on his legal ordeal and detention by ICE, which prompted a wave of support from fans and fellow artists from all corners of the hip-hop world -- from Jay-Z and Cardi B, to fellow Atlanta-based artists like T.I. and Killer Mike. 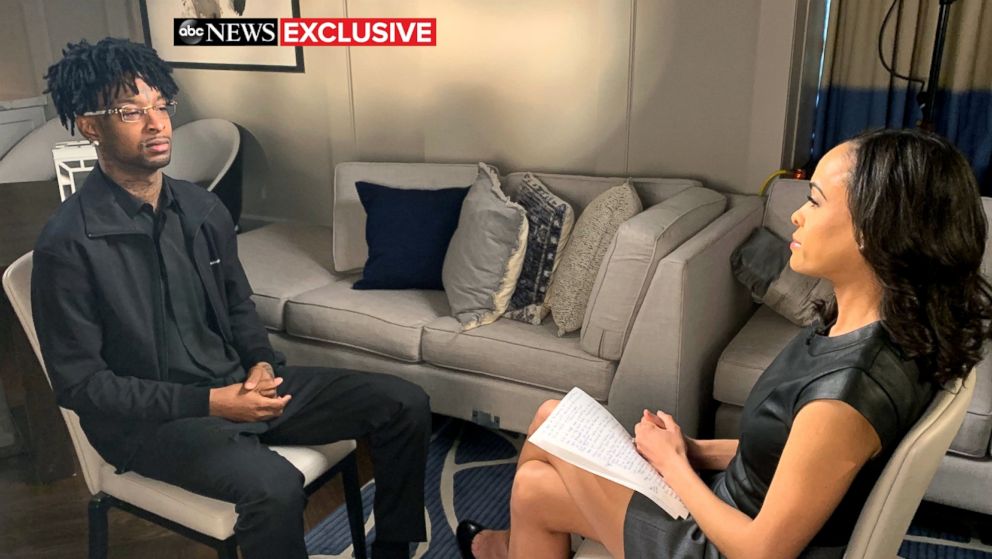 ABC News
21 Savage, the Atlanta-based rapper, who was arrested in a targeted operation by ICE, speaks to ABC News' Linsey Davis in an interview airing on "Good Morning America."

"My mama told me to picture where I wanna be," 21 Savage said, describing what was going on in his mind when he was detained. "She said, 'Visualize yourself, whatever you wanna do, just close your eyes and visualize yourself doing that. And as long as you do that, you will never be in jail.'"

The 26-year-old is a British citizen who was arrested in a targeted operation by U.S. Immigration and Customs Enforcement on the morning of Feb. 3 in Atlanta, officials said.

The news came as a shock to fans and caused widespread confusion because it was widely believed that he was born in Atlanta.

"I was just driving. And I just seen guns and blue lights. And, then, I was in the back of a car. And I was gone," he said, when asked about his arrest on Feb. 3.

Asked if he was told that he was under arrest, the rapper said, "No. They didn't -- they didn't say nothing. They just said, 'We got Savage.'" 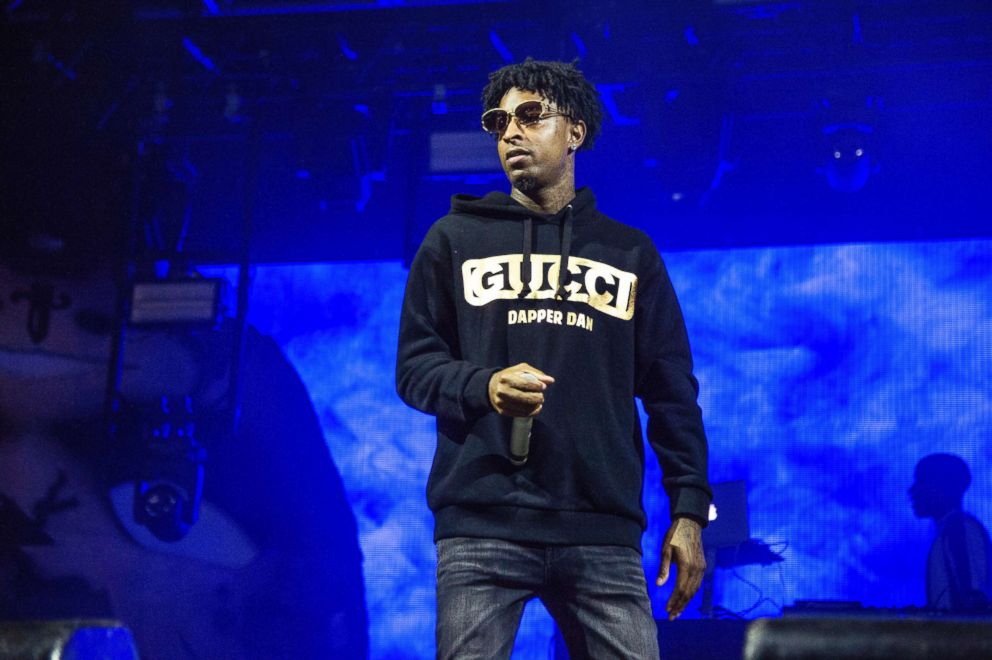 "It was definitely targeted. There was helicopters," he added, later clarifying that there was one helicopter.

At the time of his arrest, Cox told ABC News that Abraham-Joseph is a British citizen who overstayed his visa after entering the U.S. legally in July 2005 with his family.

"Long story short, he came in 2005 legally, however, he subsequently failed to deport," Cox said. "His visa expired in 2006 he has been in the country unlawfully ever since."

But according to the rapper and his attorneys, 2005 was not the first time he entered the U.S.

Abraham-Joseph, who was born in 1992, said that he arrived in the U.S. when he was 7 years-old, but then left the country in 2005 to attend his uncle's funeral and then returned to the U.S. that same year.

"I didn't even know what a visa was," Abraham-Joseph said when asked if he was aware that his visa had expired.

"I was seven when I first came here. And we had left in, like, 2005 'cause my uncle died, my Uncle Foster. So we went back to go to his funeral, and, then, we came back," he added. "So that's why I think [ICE] got it confused where they thought, like, that was my first coming."

Asked about this discrepancy, Cox told ABC News on Thursday that he doesn't have more information at this time.

Because his visa expired while he was a minor, 21 Savage's detention has reinvigorated the national debate about immigration and "Dreamers" -- some 750,000 young, undocumented immigrants who arrived in the U.S. as children and have met the requirements to participate in the Deferred Action for Childhood Arrivals program.

"I guess so," 21 Savage said, when asked if he considers himself to be a "Dreamer," and explained that because he was so young when left the U.K., he has limited memories of his childhood there.

"I went into first grade here, so I don't really remember too much. I remember, like, my grandma house, and that's probably about it. I didn't really do much there," he said, adding, "I've been Atlanta probably 20 years, 19 years. I'm from Atlanta, in my eyes." 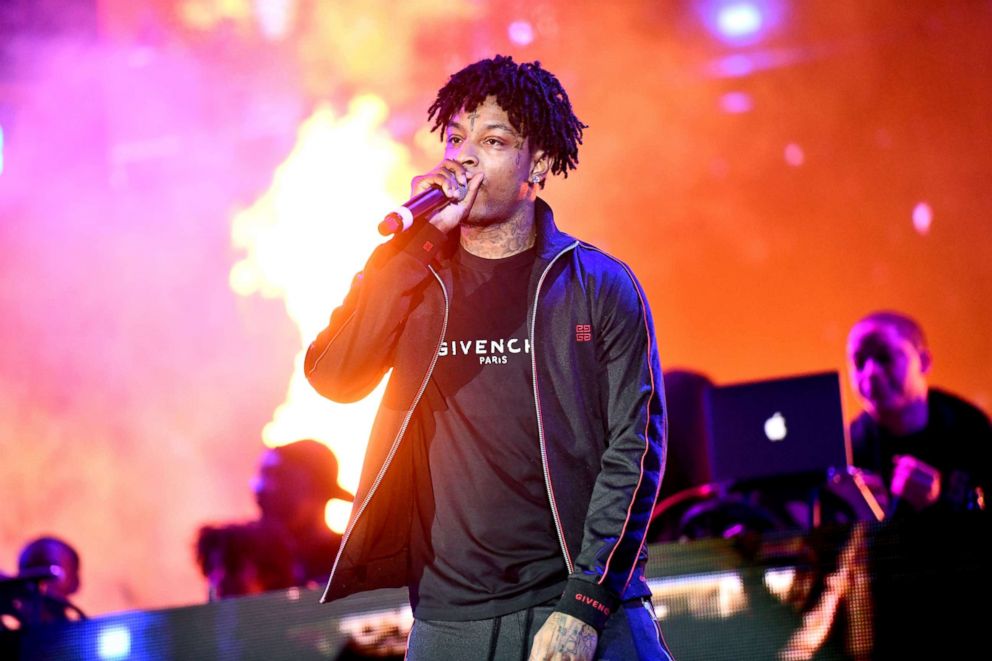 The rapper's arrest came as the nation grapples with a longstanding and divisive debate on immigration reform and a push by President Donald Trump to secure funds to build a wall on the U.S.-Mexico southern border —a key campaign promise that prompted the president to reject a funding bill that led to the longest government shutdown in U.S. history.

The partial government shutdown ended nearly three weeks ago when the president signed a temporary funding bill, but if lawmakers don't reach a deal that the president can sign by Friday, this could prompt a second shutdown.

(MORE: From Cardi B, to T.I., artists rally behind 21 Savage after he was detained by ICE)

Dina LaPolt, the rapper's lead attorney, questioned the timing of the rapper's arrest in an exclusive interview with "Good Morning America" on Thursday and said that she thinks he could have been targeted so that the administration can send a message on immigration.

"The Trump administration, their policies on immigration have been pretty debilitating. And I think that, you know, they look for ways to make examples of people," she said, suggesting that the government already knew that the rapper didn't have legal status because he already had a U visa application pending with U.S. Citizenship and Immigration Services.

ICE would not comment on the claim from LaPolt.

LaPolt, an entertainment attorney and artist rights' advocate, added that America was built by immigrants and the hip-hop artist has contributed culturally and given back to his community.

"He wakes up every day thinking how I can help people. I mean, he's set up national financial literacy programs, he does things with the solicitor general attorney in Atlanta, you know, talking to the youth of Atlanta. ... He helps young mothers. I mean, he's an amazing individual," she said.

"The arrest and detention of 21 Savage is an absolute travesty, his U visa petition has been pending for 4 years. In addition to being a successful recording artist, 21 deserves to be reunited with his children immediately, #Free21Savage," Jay-Z said in a statement to ABC News.

Before his release on bond, Spiro told ABC News that 21 Savage's case reflects the struggle that "Dreamers" face in the United States.

"When She'yaa came to this country he was 7 years old and entering the 1st grade. He was one of many dreamers – of all walks of life and ethnicities – that came to this country to seek a better life and to contribute meaningfully to his community. He has done that. And more," Spiro said on Monday. "We remain concerned that She'yaa – and many like him – go to bed concerned about being ripped away from their families, even when they are acting in good faith and contributing to our country. That cannot be right. And that is why we decided to help."

21 Savage released his sophomore album, "I am > I was," in December 2018 and was nominated for two Grammy awards this year.