Actress and activist Alyssa Milano, one of the first proponents of the #MeToo hashtag when the movement launched one year ago Monday, said President Donald Trump's recent comments that it is "a very scary time for young men in America" was a fear tactic.

Referring to critics of #MeToo who say the movement encourages unproven sexual misconduct allegations against men, Milano told "Good Morning America" on Monday, "I don't know why their concern isn't that boys can also be hurt, molested and sexually assaulted."

She said comments like Trump's are "fear tactics" in response to "white men" being in danger of losing some of their power in society.

Milano also acknowledged, "Women have had it hard for generations and there are going to be false claims. We have to define what that process looks like" and make sure everyone, including the accused, get a "fair shot ... This is all gray area, new territory that we've never faced before," she said.

The former "Who's the Boss" star, 45, tweeted exactly one year ago Monday, "If you’ve been sexually harassed or assaulted write 'me too' as a reply to this tweet." Within hours, the movement caught fire, racking up more than a million #MeToo tweets in less than a day.

One year ago today, you shared with me your #MeToo stories.

Thank you @TaranaBurke for being a force for good. https://t.co/LAp37QT2nu

Milano stopped by "GMA" to reflect on the last year.

Saying she never expected that her simple tweet would result in millions of powerful stories, Milano said, "I think we've come a long way ... But, I think we still have a long way to go."

Women have not only been speaking out about their experiences with assault and misconduct, they have been "standing in solidarity with each other, which I think is the most beautiful thing," she said.

FULL INTERVIEW: @Alyssa_Milano talks the #MeToo movement, a full year later to the day. What's next for the movement that has changed the world? https://t.co/hOA4cYZxGS pic.twitter.com/a0J5jVBjQd

"These lessons of acceptance and equality, we have to teach them at a much younger age," said.

Boys often are taught this in high school, she said, "then to expect them to act with mutual respect in college and I think it's too late." 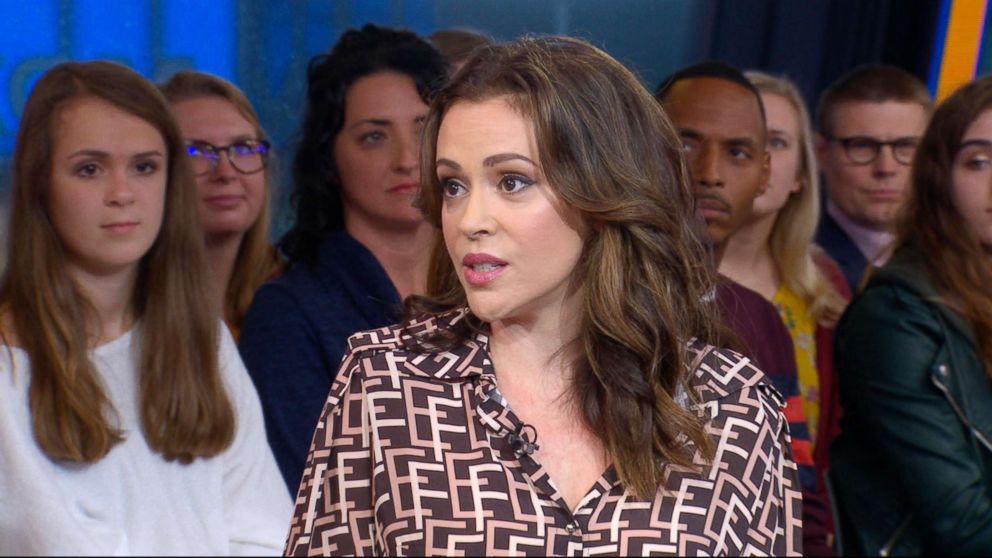 "Then people go into these jobs after college and you still have that sort of fraternity, sorority mentality," Milano said.

Milano attended Senate confirmation hearings for now-Justice Brett Kavanaugh earlier this month when both he and Christine Blasey Ford, who alleges he sexually assaulted her when they were teenagers, both testified. Kavanaugh vehemently denied the allegations.

She attended with #MeToo founder Tarana Burke, who first created the hashtag over a decade ago, and Milano said the testimony from Ford and Kavanaugh was intense and "ran the gamut of emotions" for her.

Later on Monday, to further raise awareness for #MeToo, Milano shared a video that she recorded for her daughter, but never shared publicly.

"One year ago I recorded this for my daughter, explaining why I shared my story of sexual assault," she wrote in a caption of the video. "I never expected to release it publicly. Now, I feel it’s too important not to share. #MeToo. Dear Elizabella, I love you so. I will fight so you don’t have to. Love, mama."

In the 4-minute clip, the actress opens by explaining the times and how woman are starting to share their stories of harassment and assault. Milano gets emotional as she shares her fears for her little girl and actually explains that her original tweet one year ago came from that desire to unite women in order to create a better world for Elizabella.

"In a way, all of this is because of you," she said, breaking down. "I want you to grow up from a strong, little girl into a strong woman that really knows her worth."

One year ago I recorded this for my daughter, explaining why I shared my story of sexual assault. I never expected to release it publicly. Now, I feel it’s too important not to share. #MeToo

Dear Elizabella,
I love you so. I will fight so you don’t have to.
Love, mama pic.twitter.com/TYk5XXFksY

Though Weinstein has always denied the numerous accusations of harassment and sexual assault levied against him, the hastag was a lightning rod for many men and women to speak up and join this community.

Lady Gaga, Anna Paquin, Terry Crews, Rose McGowan and many others embraced the hashtag and shared their stories with the world.

Since then, many powerful men and women have fallen from grace and either lost their job or public standing after accusations surfaced. Kevin Spacey, Matt Lauer, Al Franken, Mario Batali and original Weinstein accuser Asia Argento are among the many accused of sexual misconduct or assault in the last year.

Burke, who created the #MeToo hashtag when she launched a non-profit to help victims of sexual harassment and assault, told ABC News earlier this month, "We've never been able to have a sustained national dialogue about sexual violence" until now.