Revered journalist and author Joan Didion died Thursday at her home in New York City due to complications from Parkinson's disease, her longtime publisher confirmed to ABC News. She was 87 years old.

Didion was known as one of most incisive writers of her time, penning screenplays, novels and works of nonfiction, including two books about her own personal losses: "The Year of Magical Thinking" and "Blue Nights."

"Joan was a brilliant observer and listener, a wise and subtle teller of truths about our present and future. She was fierce and fearless in her reporting. Her writing is timeless and powerful, and her prose has influenced millions," her editor, Shelley Wanger, said in a statement. "She was a close and longtime friend, loved by many, including those of us who worked with her at Knopf. We will mourn her death but celebrate her life, knowing that her work will inspire generations of readers and writers to come."

Born in Sacramento, Didion was a graduate of the University of California, Berkeley, and went on to live in New York City, where she launched her career as a journalist, working at Vogue. Her first book, "Run River," was published in 1963; other novels included "A Book of Common Prayer," "Democracy" and "The Last Thing He Wanted."

The next year, Didion married fellow writer John Gregory Dunne, who became her longtime collaborator. Together, they moved to California and worked on screenplays for "The Panic in Needle Park," "Play It As It Lays," based on her novel of the same name about Hollywood and depression, and "A Star Is Born," among others.

In 1967, Didion and Dunne adopted their daughter, Quintana Roo.

Didion documented her time in California in the '60s, including an unflinching look at the counterculture movement, in an essay collection, "Slouching Towards Bethlehem," that became iconic.

"My only advantage as a reporter is that I am so physically small, so temperamentally unobtrusive, and so neurotically inarticulate that people tend to forget that my presence runs counter to their best interests. And it always does," she wrote as part of that collection.

Alongside "The White Album," a later collection of essays, Didion established herself as a storyteller for California in the second half of the 20th century. 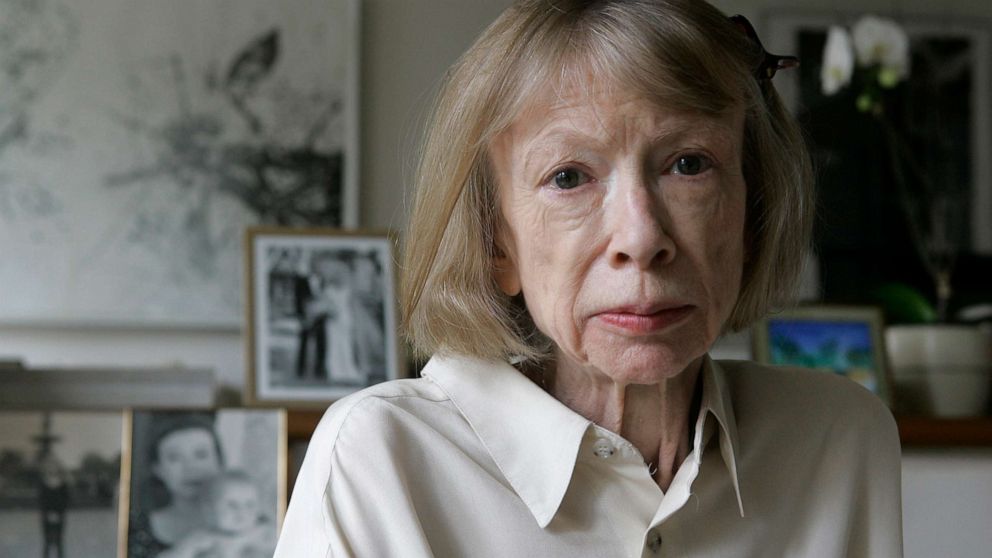 Kathy Willens/AP, FILE
Author Joan Didion poses for a photo in her New York apartment, Sept. 26, 2005. Didion, the revered author and essayist whose provocative social commentary and detached, methodical literary voice made her a uniquely clear-eyed critic of a uniquely turbulent time, has died. She was 87.

Through the last two decades of the 20th century, Didion wrote about the Central Park Five, El Salvador and the Cold War, and plenty on American politics, among many other topics -- sometimes as reporting and nonfiction essays, sometimes as novels.

"The narrative is made up of many such understandings, tacit agreements, small and large, to overlook the observable in the interests of obtaining a dramatic story line," she wrote in a 1988 piece for The New York Review about presidential election campaigns.

Even as she had said "Goodbye to All That," Didion kept a foot in New York for the rest of her life. Into the 2000s, Didion and Dunne lived in a New York City apartment, where Dunne died in late December 2003 of a sudden heart attack.

She wrote a memoir, "The Year of Magical Thinking," as a sort of attempt to understand her husband's death. With her characteristic specificity and thoughtfulness, she reported on her own thoughts in the year after Dunne's death, a portrait that earned her the National Book Award for Fiction in 2005.

MORE: Michael Nesmith, the Monkee for all seasons, dies at 78

As her husband died, their daughter, Quintana, was in the hospital with pneumonia and septic shock. While Quintana ultimately survived that, she died a year and a half later, in August 2005, shortly before "The Year of Magical Thinking" was published, after a fall. After her daughter's death, Didion wrote "Blue Nights," published in 2011, a kaleidoscopic rumination on motherhood, illness and death, and Quintana.

Didion, a 2013 recipient of the National Medal of Arts and Humanities, had her latest essay collection, "Let Me Tell You What I Mean," published earlier this year.

Which was a writer."