WARNING: Spoilers ahead for "Avengers: Endgame"

With so many changes taking place at the end of "Avengers: Endgame," there are a few familiar faces fans won't be seeing anytime soon -- or at all -- in the next phase of the Marvel Cinematic Universe.

One of those is Chris Evans, who has not only hinted on social media that his run as Captain America has come to an end, but the closing scene of "Endgame" has him passing the red, white and blue duties to his best friend and fellow Avenger, Sam Wilson (played by Anthony Mackie).

Officially wrapped on Avengers 4. It was an emotional day to say the least. Playing this role over the last 8 years has been an honor. To everyone in front of the camera, behind the camera, and in the audience, thank you for the memories! Eternally grateful.

(MORE: Open letter: A 'thank you' to the cast, crew of 'Avengers: Endgame')

And while his run as Cap might be coming to a close, what won't stop is his work off-screen helping children battling cancer, including the young boys and girls at Christopher's Haven in Boston.

For the better part of two decades, Christopher's Haven has been helping provide housing to children and their families as they receive cancer treatments in the Boston area.

The magic within⚡️⚡️helps these kiddos soar high above their challenges and reality. We are inspired by their smiles and endless hope❣️ #magicwands #lovinglife #smiles #christophershaven

As their missions states, "Our home is more than a place to stay, it’s a support system to help with things large and small, and a community where families can be together, share a laugh, be comforted, and comfort others."

(MORE: 'Avengers: Endgame': The girl-power moment everyone is talking about and more)

One of Evans' most recent contributions was to bring one lucky fan who donated to Christopher's Haven through the online platform Omaze, to the "Avengers: Endgame" premiere in Hollywood last month.

Christopher's Haven executive director Joyce Duvall said that through two short iPhone videos and some red carpet love for the young winner Kara, Evans was able to support nonprofit organizations to the tune of $1.2 million overall, with $770,000 going to Christopher's Haven.

"I work full-time just trying to raise our budget for Christopher's Haven, and [Chris] put in a few minutes and he raised two years of budget for us," Duvall told "GMA." "It's just so much help for us, it's staggering. He just gets it. All these guys know now how much of an impact they can have on the charitable world."

"Also, if you show up for one day in a sick child's life, it is a day for them to remember for the rest of their lives," she continued. "It's also nice for kids to have a real, red-blooded American hero for kids to look up to."

Who saw #Avengers: #Endgame this weekend? Kara G. got to see it with Chris Evans at the premiere! Here she is keeping her cool on the *purple* carpet. #omazewinners (No spoilers 🙏🏽)

And Evans isn't the only Avenger dedicated to using his fame for good. In 2015, Robert Downey Jr. was able to raise $2 million for Julia’s House, a children’s hospice in the UK doing the same great work as Christopher's Haven.

"They really feed off each other and support each other in giving [to charities]," Duvall said. "Putting their name and associating with a charity, the trickle-down effect is incredible. Every good thing that we've had has come from a trickle-down in some way from Chris."

Duvall said that Evans is so dedicated to promoting her organization's good work that he's gotten others in the community to donate as well -- netting upwards of $100,000 from a local business owner.

The Twitter-bowl, a bet for a great cause

Speaking of Boston, you might remember the fun Twitter feud Evans had a few years back with Chris Pratt over the Super Bowl between the New England Patriots and Seattle Seahawks.

After a little back-and-forth, the duo decided to make a bet on their hometown teams, with the loser visiting the winner's charity of choice.

"Seahawks win, you fly yourself to Seattle, visit @seattlechildren hospital as Captain America, waving the 12th man flag," Pratt wrote, while Evans fired back that if the Pats took the crown, Pratt would have to come to Boston and meet the kids at Christopher's Haven.

The Pats won and Pratt made good on his promise.

#Repost @evansanddowney with @get_repost ・・・ Next month is my 32nd birthday. I’m Grace by the way! The one who runs this #evansanddowney fan account. Anyway, it may be bit early but I wanted to do something different for my birthday and I came up with the idea of seeing if I can somehow raise funds for #christophershaven, the charity that #chrisevans himself often helps with. On my #photography page (@proudmommygracephotography), I kicked start it there but I wanted to see if any of you would like to somehow help me raise funds for @christophershaven as a group-with any ideas you may have to raise money. My son was in the hospital last year due to a massive asthma attack and as he was getting better, we personally saw first hand kids and teens suffering from cancer and we lost family members to cancer. I would love to help and I would love to have your feedback as well. #chrisevansfan #chrisevansbeard #chrispratt #prattprattpratt @christophershaven @prattprattpratt

But in classic Evans fashion, he repaid the favor and visited Seattle Children's Hospital as well. 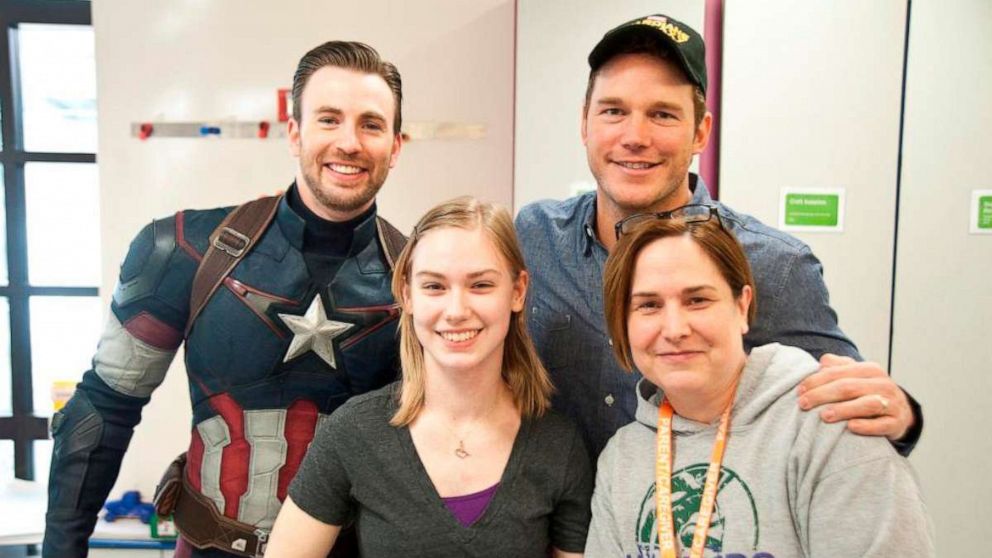 Thanks to @Disney for all your magic to make this visit possible and for sending Captain America his suit! pic.twitter.com/zBZyfcRE4p

Thank you to @Marvel for sending gifts for our patients. They were thrilled to receive them! pic.twitter.com/iCOXPGREjb

In visiting kids, Evans and Pratt aren't looking for press in any way -- but if it helps promote the cause, they're all for it.

"They just wanted it to be from them to the kids," Duvall said of the post-Super Bowl visit. But paparazzi found out anyway.

"As Chris and Chris were leaving, I said, 'There's a lot of photographers out there, I tried to keep it quiet but it got out,'" Duvall said. "Chris Pratt looked at me and said, 'Wouldn't paparazzi help you guys?' ... He walks outside and goes out to the cars, looking for the paparazzi. He put this extra effort out so we could get this extra coverage."

Just a hometown boy at heart

So why is Evans so dedicated to helping children battling cancer and their families -- aside from the obvious?

As Duvall says, the star's motivation has never been about drumming up press or publicity. So aside from him calling Christopher's Haven a great organization in videos for fundraisers, you won't see him comment too much about the time he puts in behind the scenes.

But Duvall says Evans' dedication to his community comes from his roots as a small-town boy from Massachusetts.

In fact, Evans and Duvall first teamed up because the two are from the same town and the star actually "went to high school with my kids," Duvall said.

Ironically enough, the duo reconnected at the Boston Film Festival years ago, and Evans flat-out told Duvall: "Anything you ever want, I'll do for you."

"Since then," Duvall said, "he's never once ever let me down."

It's something that Evans doesn't do because he has to; it's because helping people is close to his heart.

"He did an event for us at Fenway Park, and he listened to one of the parents' stories and he was in tears," Duvall said. "He was just so moved. This is genuine."

ABC News and Marvel are both owned by the Walt Disney Co.