Throughout “The Bachelor’s” 18-year history, not a single bachelor chosen to lead the franchise has ever been a black man -- until now.

On Friday, the show announced that 28-year-old Matt James will star as the Bachelor for the show’s 25th season.

James, a real estate broker, entrepreneur and community organization founder, was originally cast as a suitor on Clare Crawley’s season of “The Bachelorette,” production of which has been delayed due to the coronavirus pandemic.

Crawley's search for love on "The Bachelorette" will now air this fall, before James makes his debut as the new Bachelor.

"My first reaction was, ‘Does this mean I don’t get to meet Clare?,’ because I was looking forward to meeting her," James said Friday on "Good Morning America," describing his reaction to being cast as the new Bachelor. "I had set aside all this time and we’d gone out to California and been called back for quarantine. I’m super excited for her and her season but I’m looking forward to meeting her eventually."

James, a North Carolina native, is an alum of Wake Forest University, where he majored in economics and played wide receiver for the school's football team. He then went on to play football professionally before moving to New York City.

He founded ABC Food Tours, an organization that is designed to find creative ways to engage kids from underserved communities in New York City, encouraging physical and mental wellness, while also giving them opportunities for new experiences throughout the city.

James is also a friend of “Bachelor” alums Hannah Brown and Tyler Cameron, and spent time with the two in the beginning of quarantine -- as seen from their viral Tik Tok videos.

"It’s an honor," James said of being the next Bachelor. "I’m just going to lean into myself and how my mom raised me and hopefully when people invite me into their homes on Monday night they’re going to see that I’m not much different from them and they see that diverse love stories are beautiful."

Prior to the announcement of James as the new Bachelor, fans and former stars of the series have called out its lack of representation on social media.

“The Bachelorette’s” Rachel Lindsay -- the only black person in 40 seasons of "The Bachelor" franchises to ever have one season devoted to her -- has been a vocal critic of the show since appearing on it three years ago, and has said on her website that it’s long past due for a “diversity makeover.”

“I was hoping, when I came on, to be a trailblazer for that, and to increase diversity in the audience that watches it and also who comes on the show and who could potentially be the lead,” Lindsay told “GMA.” “I felt like the franchise had my back in that. But in the last three years, there really haven’t been changes made.”

Online, more than 75,000 people have signed a petition on Change.org demanding for representation and a set of actions to help combat racism like “giving equitable screen time to BIPOC contestants,” “feature BIPOC contestants, including their experiences as BIPOC, on the show as storylines” and above all, “cast a black bachelor as season 25 lead.”

James reacted to Lindsay's comments by calling her an "important voice" on the issue. He described his pick as the new Bachelor as a "step in the right direction."

"When Rachel speaks, we listen. She has a very important voice in all this, being the first black woman, person of color, to have a lead," he said. "I think that we’re all filing suit in that conversation and this is hopefully the first of many black men to be in the position that I’m in right now."

"In my opinion I don’t think it’s ever the wrong time to do the right thing," James added. "Too little too late for me is this happening and we can’t have change until we put that first foot forward and the first foot forward for ‘The Bachelor’ franchise is having a black lead so I’m excited to take on that role."

Even as the show is attempting to turn the page with James at the helm, Lindsay says there is still much work to be done.

“I want producers of color,” she said. “I would like for them to cast leads that are interested in dating outside of their race, aren’t just getting their experience for the first time on national TV. I need the acknowledgement of that, not putting a Band-Aid over the situation and just saying, ‘Here, we’re gonna put this here, are you happy now?’”

Karey Burke, the president of ABC Entertainment, said the network is committed to "continue to take action" in terms of bringing diversity into the franchise.

“We know we have a responsibility to make sure the love stories we’re seeing onscreen are representative of the world we live in and we are proudly in service to our audience,” she said in a statement. “We will continue to take action with regard to diversity issues on this franchise. We feel so privileged to have Matt as our first black Bachelor, and we cannot wait to embark on this journey with him.”

James said he hopes his history-making role as the first black Bachelor paves the way "for a lot of diverse love stories because those are beautiful stories."

"I’m looking for qualities that my mom embodies, and that’s selfless, honest, caring, compassionate and those are qualities found in women all shapes, sizes and races and it’s not a black or white thing," he said. "I’m hoping when that limo pulls up there’s a lot of diversity and I see every type of women coming out of that limo." 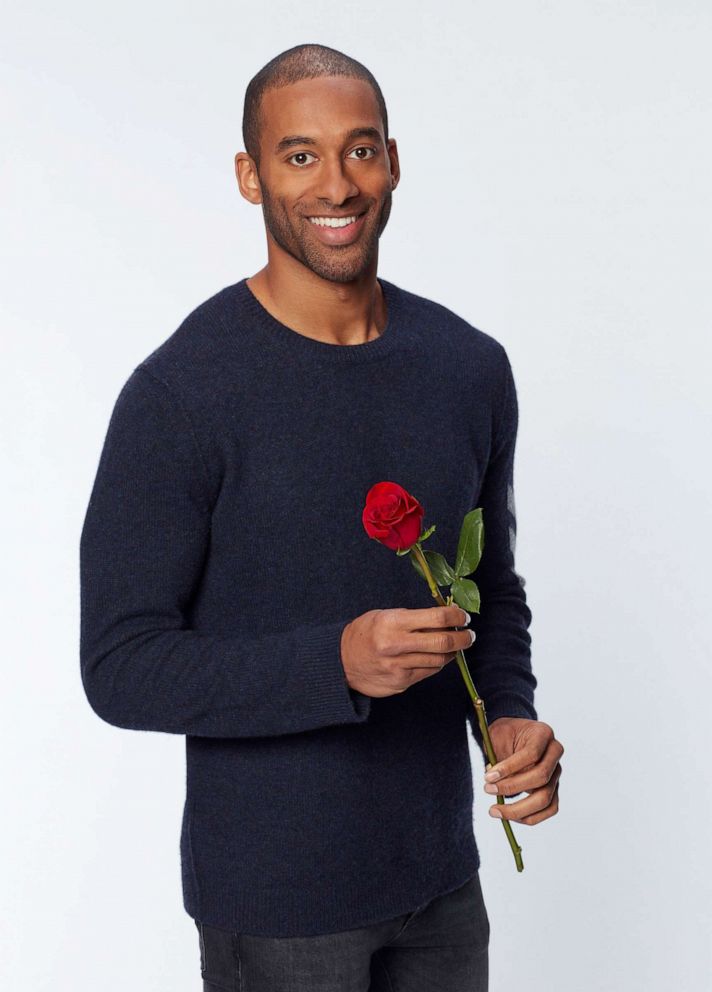 Craig Sjodin/ABC
Matt James is the first black lead of "The Bachelor" in franchise history.