By Angeline Jane Bernabe
Video by Brittany Berkowitz, Nidhi Singh, Will Linendoll
Share —
Sign up for our newsletters to get GMA delivered to your inbox every morning!

Tori Spelling is throwing it back to her "Beverly Hills, 90210" days.

In a video shared on Instagram Tuesday night, the actress and author reunited with her former "Beverly Hills, 90210" co-stars Jennie Garth and Lindsay Price to recreate a scene from the iconic show.

The video features the three stars recreating the scene using a fun transition along with the trending song "I'm Just a Kid" by Simple Plan.

MORE: '90210' cast remembers Luke Perry: 'He's been with us every step of the way'
Editor's Picks

"It's a 90210 reunion, as Jennie Garth and I celebrate NYE with Lindsay Price and Curtis Stone on their new show 'In the Spirit' with Lindsay and Curtis!" Spelling wrote in the caption, referencing the HSN show Price co-hosts with her husband Curtis Stone. Stone is a chef, TV host and cookbook author.

Price shared the video to her own Instagram account with the caption, "New year, same zip code."

She also teased the upcoming episode of "In the Spirit with Lindsay and Curtis" and said that the three former castmates had been busy "rekindling some 90210 memories over champagne and appetizers." 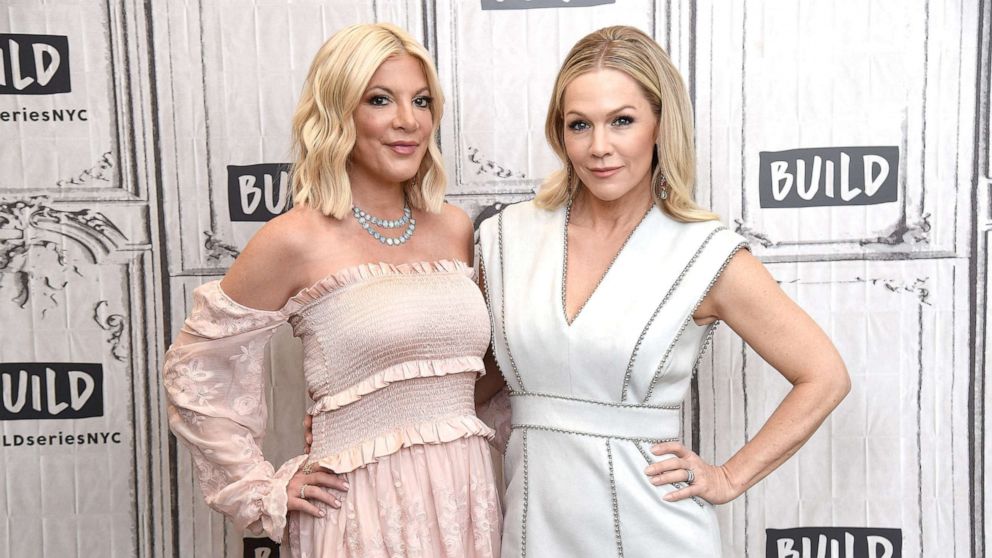 Spelling and Garth starred on "Beverly Hills, 90210" as Donna Martin and Kelly Taylor, respectively, for the show's entire 10 season run. Price joined the show in 1998, playing the character Janet Sosna, and remained on the show for its ninth and 10th seasons.

Spelling and Garth regularly revisit memories of their time on the show in their podcast, "90210MG," which they launched in 2020.