Thousands blanketed the streets last year to honor Nipsey Hussle and although the streets of LA are quiet amid the coronavirus pandemic, social media was flooded with tributes to the rapper on the first anniversary of his death.

Today is about NIPSEY HUSSLE save the pandemic talk for tomorrow 🤷🏾‍♂️

The hip-hop star, whose given name is Ermias Joseph Asghedom, was killed at age 33 on March 31, 2019 after he was shot multiple times in the head and torso while standing outside of his clothing store, Marathon Clothing, near LA's Crenshaw District, where he grew up. He was rushed to a local hospital, where he later died.

Murals of the rapper popped up in cities around the country, former President Barack Obama wrote a heartfelt letter that was shared during his memorial service and his musical talents were recognized with two post-humous Grammy Awards. The checkered black and white flag emoji, which punctuated hundreds of thousands of social media posts, became a symbol for "The Marathon" -- Nipsey Hussle's metaphor for life and a commitment from his fans to keep his message alive.

#RestInPower to the young brother #NipseyHussle. Your life and legacy of community building will not be forgotten. #TheMarathonContinues 🏁 pic.twitter.com/Ywi9FpJCIb

"#RestInPower to the young brother #NipseyHussle. Your life and legacy of community building will not be forgotten. #TheMarathonContinues," the NAACP tweeted on Tuesday.

Hip-hop stars from T.I and Meek Mill, to Diddy and Trae the Truth shared messages paying tribute to Hussle on Tuesday.

"Cant Believe Its Been A Whole Year Bro.... Cant Lie, It Wasnt Easy the day I Found Out We Lost You, & It aint No Easier Now...," Trae wrote on Instagram. "You Know We Rocked Longer than A Lot Of People.. You was my Bro, Family & Friend... My Midnight Prayers Goin Up as Usual But a Special Prayer For You, Your Kids ,Blacc Sam, Lauren ,Your Parents, Your Gramdmother ... I know This A Hard Day ... He Gone Help Everyone Thru It... Love... #TheMarathonContinues."

The hip-hop star's influence has been cemented in hip-hop and popular culture, but his investment in his community is what defines his legacy as an activist.

Nipsey Hussle's legacy through the eyes of his brother, Los Angeles lawmakers and friends: 'The Marathon continues in us all'

It is encapsulated in Jay-Z's freestyle tribute to Hussle at a New York City concert last April: "Gentrify your own hood, before these people do it/ Claim eminent domain and have your people movin’/ That’s a small glimpse into what Nipsey was doing."

A multi-million dollar community project that was close to the rapper's heart launched last month in South Los Angeles -- an area that continues to grapple with gentrification. 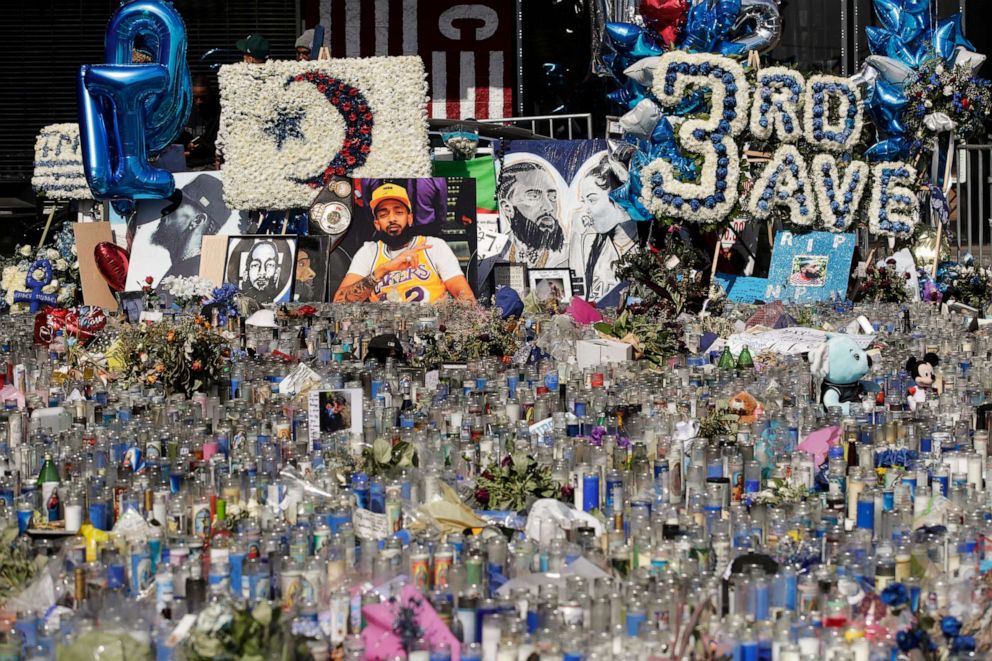 Jae C. Hong/AP, FILE
A makeshift memorial site for slain rapper Nipsey Hussle is filled with candles outside The Marathon Clothing store in Los Angeles, April 11, 2019. Hussle, 33, was shot and killed outside his Los Angeles clothing store in Los Angeles on March 31, 2019. A year after Hussle's death, his popularity and influence are as strong as ever. He won two posthumous Grammys in January, he remains a favorite of his hip-hop peers and his death has reshaped his hometown of Los Angeles in some unexpected ways.

Destination Crenshaw, which according to Los Angeles City Council member Marqueece Harris-Dawson was named by Nipsey Hussle, is a 1.3-mile open-air museum to revitalize and recognize black Los Angeles through art and culture. Hussle worked with Harris-Dawson as ideas and plans for the museum were coming together.

California state Sen. Holly Mitchell, who worked to secure $10 million for its construction, told ABC News that the rapper left a "profound" mark on his community and on a generation of people of color.

As a product of Leimert Park I learned how to ride my bike around the fountain. This project means a great deal to me. @destinationshaw #LeimertPark pic.twitter.com/QicCALXVzj

"He really was for me a reflection of the next generation of community icons ... in a short period of time he made a mark and he used his black experience and skills and talent to invest in the community in a way that only icons, frankly, do," Mitchell said in a phone interview on Monday. "It's almost like he was an old soul because he understood the importance of property ownership and business ownership."

Nipsey Hussle's legacy is archived in US history. Here's what the Congressional Record says

Hussle invested in his Crenshaw neighborhood by buying property and starting various businesses -- from his Marathon Clothing store, the co-working space Vector 90 to support entrepreneurs, restaurants, service shops, Marathon Studios and his own record label, "All Money In Records," which according to his friend and former business partner Karen Civil represents his belief in "keeping the money inside of the community."

Nipsey Hussle's legacy is now forever archived in U.S. history as part of the Congressional Record.

"For all he was given, he gave back. And for that legacy, South Los Angeles has been changed forever," @RepKarenBass says.

"His entrepreneurial and caring spirit was at the root of his efforts to ensure that South LA owned South LA and that we would not be pushed out and that we would fight to better our own community," California Rep. Karen Bass, who represents his district in Congress, told ABC News in an email interview on Monday. "I still see that spirit every day in the fight against gentrification."

Days after his death, his older brother Samiel Asghedom told ABC News that as he became more successful people would always ask Hussle, "Why do you have something in this area? Why don’t you leave and do something else?"

"But he was murdered while he was in a parking lot, hanging out, selling CDs and that’s the area that he felt attached to and did everything in the area and ended up buying a lot and rehabilitating, opening up businesses and just became a landmark for everybody."

Asghedom shared a photo of Hussle and his daughter, along with the "marathon" emoji on Instagram on Tuesday.

"Honorable . Powerful. Beautiful You Are," London wrote on Instagram earlier this month, along with a photo of Hussle and the "marathon" flag emoji. "Miss you every second of every day and even in my sleep. Until we are together again .... I’m holding it down."

Eric Holder was charged with Hussle's murder on April 4, 2019. He has pleaded not guilty and his latest hearing to set a trial date has been delayed amid the coronavirus pandemic, according to The Associated Press.

The rapper has spoken publicly about his involvement with the Rollin' 60s gang -- one of the biggest Crip gangs in Los Angeles -- and was set to attend an anti-gang violence meeting with Los Angeles police the day after his death.