Fiercely proud of her North Carolina roots, her lyrics and melodies weave intricate tales about her life in the South. A singer and songwriter, The Grateful Dead produced several renditions of "Oh, Babe, It Ain't No Lie," a song she composed. Bob Dylan covered other songs she created including "Shake Sugaree" and "Freight Train."

Other famous acts including Joan Baez, Gary Clark Jr., Peter, Paul and Mary, and The Quarrymen, who evolved into The Beatles, also covered her songs.

Cotten's music influenced many blues and folk artists. Although her songs often were co-opted by other musicians, she worked hard to reclaim her legacy.

"She's very, very important to North Carolina's history," said Veronica Cordle, executive director of the North Carolina Music Hall of Fame. "There's so many people that looked up to her and that she influenced in the way that they play and the feeling that they put into their music."

She was a master storyteller, imparting wisdom whenever she played. Often incorporating her audience into her performances, encouraging them to sing-a-long and participate. "I just feel honored to have had her in my life and for me to be a part of her life. There was nobody like her," Brenda Evans, Cotten's great-granddaughter told "Good Morning America."

Many may know her songs, but not know the woman behind them. 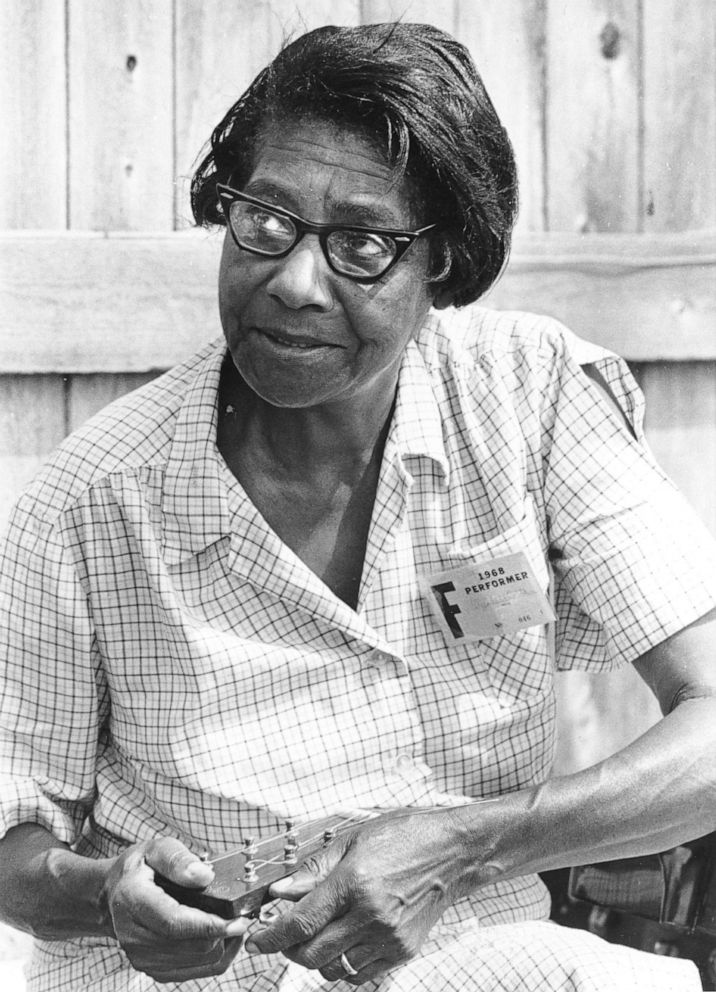 Cotten was born around 1893 outside of Chapel Hill, North Carolina. At a young age, she would borrow her brother's banjo, teaching herself how to play. Forced by financial circumstances to drop out of school in the third grade, she cleaned houses for 75 cents a month, eventually getting a 25-cent raise, to save up for a $3.75 Sears Roebuck Harmony Stella guitar.

Crafted for a right-handed player, the left-handed Cotten played the guitar upside down and backwards. Her signature alternating bass style, now known as "Cotten Picking," involved playing bass notes with her index finger and melody notes with her thumb.

"I've never heard anybody that can play the guitar the way she did," Evans said. "It always seemed to me that she had more than one guitar accompanying her, and it was just [her] playing."

Around age 12, she wrote her most famous song, "Freight Train." The song became popular during the revival of American folk music and British skiffle in the late 50s and early 60s. It was written about her hometown in North Carolina and dealt with many adult themes, including death and depression.

"She wrote as a 12-year-old, 'When I'm dead in my grave.' This is what sticks out to me. 'No more good times will I crave,'" Evans said about her great grandmother's lyrics. "It showed me how wise she was even at the age of 12."

Born with the surname "Nevills," in her mid-teens Elizabeth married Frank Cotten. Her husband's religious family strongly disapproved of her playing music. Besides a rare church performance, she stopped playing publicly for some time.

As a housewife, Cotten spent her days raising her only child, Lillie, and later on helping with her grandchildren and their children as well, but the music never stopped.

"I don't remember a night she didn't play the guitar," her great-grandson, John Evans Jr. said. "I mean, sometimes I'd be too tired to go to school. She'd be playing till 3 or 4 in the morning. It was mesmerizing to me, rather than put me to sleep. It kept me awake." 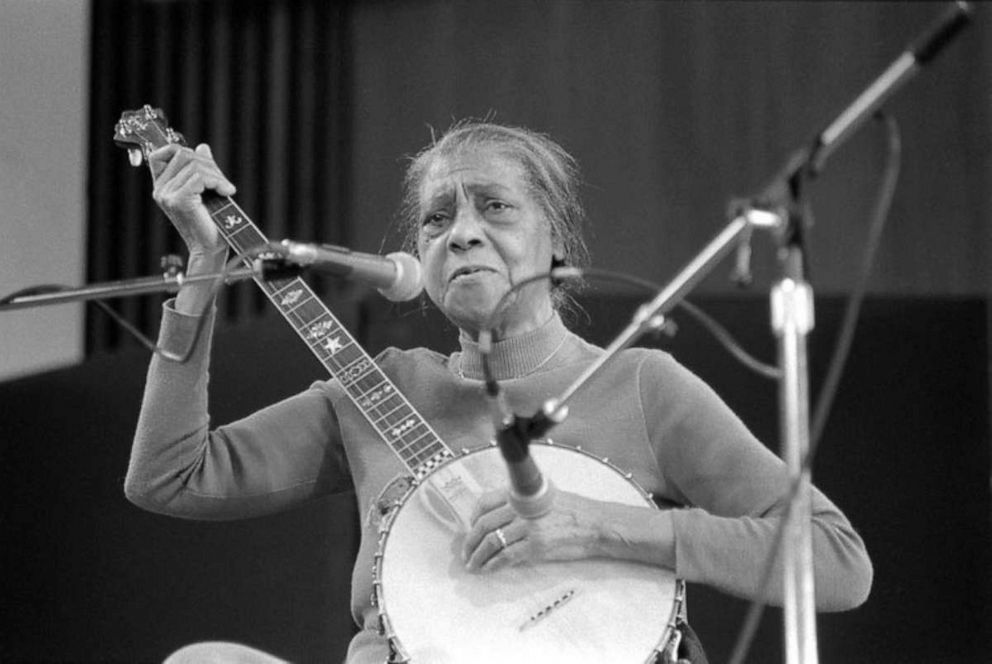 "I ain't never been much shy." — Meeting with Portland Public School students, 1978

By the 1940s, Cotten, by then divorced, moved up to Washington, D.C., to be with her daughter and by chance met the famous folk-singing Seeger family, which soon hired her to work at their house. Pete Seeger, one of their most notable members, was famous for activist songs like "Turn! Turn! Turn!"

Her great-grandson described her excitement when she saw the Seegers' musical instruments hanging in their home. During her down time she went to the pantry and played guitar. The Seegers heard her playing and realized her amazing gifts. She was asked to accompany them on their sets, and in her 60s she resumed playing publicly.

Cotten would sing "Freight Train" to young Peggy Seeger, Pete's half sister. When Peggy Seeger moved to London, she would play the tune in local coffee houses where other artists picked up on its catchy lyrics. The song spread around and eventually was falsely copyrighted by British songwriters Paul James and Fred Williams.

John Evans Jr. recounted that she turned to the family and said "That's my song."

Cotten, with help from the Seeger family, sued for copyright infringement and eventually settled out of court in 1957, but, according to her great-grandson, she only received a fraction of the royalties made off the song. 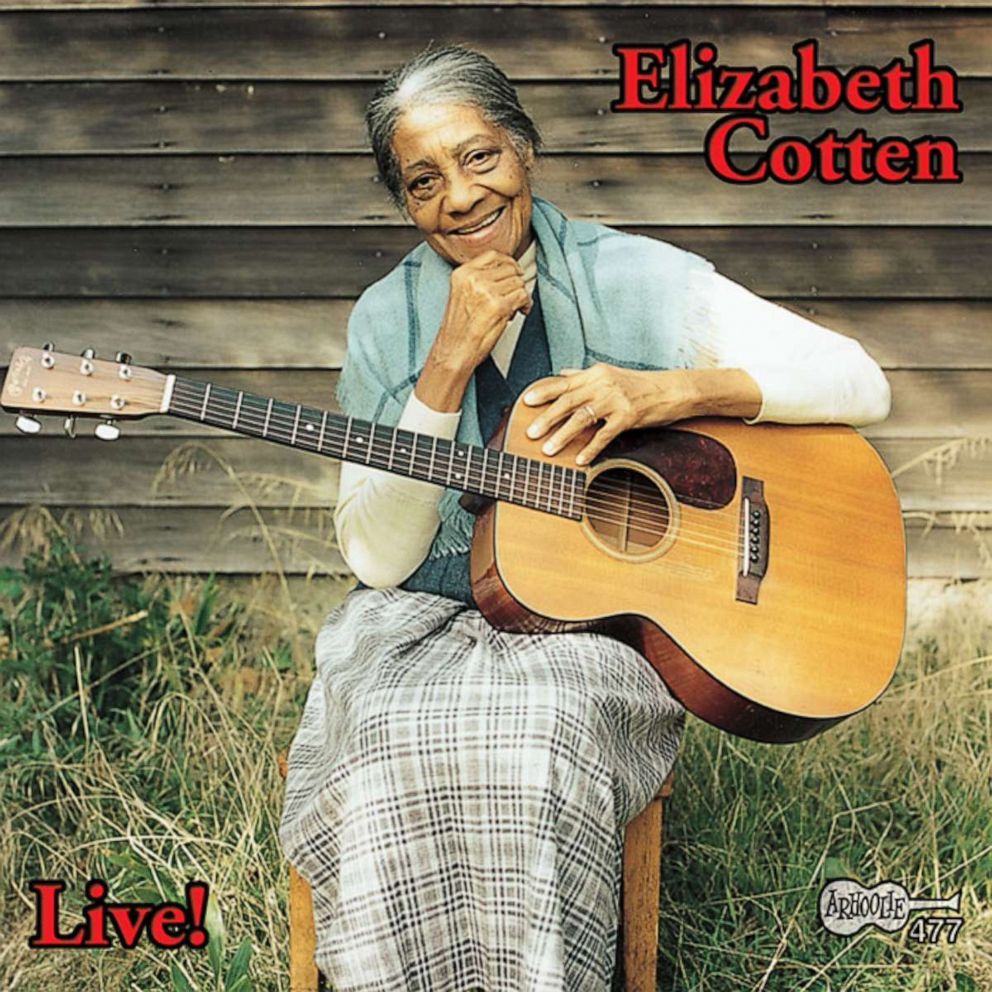 "I still like to play my guitar, and I'll do that as long as I can work my fingers. I've asked the Lord to let me stay here as long as I can." — 1983 interview in The New York Times

Elizabeth Cotten went on to get her GED in her 80s and win a Grammy at 90 years old for best ethnic or traditional folk recording for "Elizabeth Cotten Live!" Not only did she perform on the same bill as legendary performers John Hurt, Skip James and Muddy Waters, but she also was invited to perform at the Newport and American Folklife Festivals.

In October 2019, she was posthumously inducted into the North Carolina Music Hall of Fame. She inspired many future players, and her grandchildren, or "grits," as she called them, went onto musical careers of their own. Jay-Z and Nas actually sampled her grandson's band, Larry Ellis & the Black Hammer, on their song "Success." Although she found her own success later in life, she never lost her passion for music.

Cotten performed her last concert weeks before she died at 95.

"She was a Queen," Peggy Seeger told Folk Alliance International. Unsatisfied with that statement she rephrased it, adding, "No, that's not quite it. Elizabeth Cotten was what a Queen should be."