"Dancing with the Stars" fans were left begging "Gimme More" on Monday, when the night saluted Britney Spears' illustrious career. While the competitors were not "Intimidated" to push themselves on the ballroom floor, Christine Chiu's dream of winning the Mirror Ball trophy was broken like "Shattered Glass."

For the second week in a row, the audience voted the "Bing Empire" star into the bottom two, leaving the judges to choose between saving her or "Real Housewives of Atlanta" star Kenya Moore. The panel decided to spare the latter.

Also, on Monday, three members of the "DWTS" cast were absent on the ballroom floor -- pro dancer Cheryl Burke, Peloton instructor Cody Rigsby and judge Derek Hough. Burke and Rigsby both tested positive for COVID-19 last week, despite being fully vaccinated, and Hough sat out the night out of "an abundance of caution," as announced by host Tyra Banks.

Despite being unable to perform before the audience, Rigsby and Burke were beamed in virtually and performed their jazz routine to Britney's "Gimme More" on split screens. Unfortunately, the two ended the night at the bottom of the pack with an overall score of 18 out of 30 -- but the audience decided to give the two another chance and sent them through to next week's show.

Meanwhile, three competitors tied for first place on Monday, a season first, with Amanda Kloots, JoJo Siwa and Olivia Jade collecting three straight eights for an overall score of 24 out of 30.

MORE: 13 'Dancing With the Stars' facts every fan should know

Kloots dazzled with her cha cha to Spears' "Circus," but judges Len Goodman, Carrie Ann Inaba and Bruno Tonioli all agreed that the "Talk" co-host needed to take more risks on the floor. While the judges praised Kloots for her technical skills, saying she delivered a clean and solid routine, they felt her dance was too safe.

As for Siwa, the Nickelodeon star wowed the audience by lifting partner Jenna Johnson three separate times during their fresh and powerful Argentine tango to Britney's "...Baby One More Time." The complicated routine earned high praise from the three judges, but Siwa was held back by a missed step in the middle of her dance.

As for birthday girl Olivia Jade, who just turned 22, the three judges lauded the influencer's flowing tango to "Hold It Against Me," dubbing it the "best performance of the night." 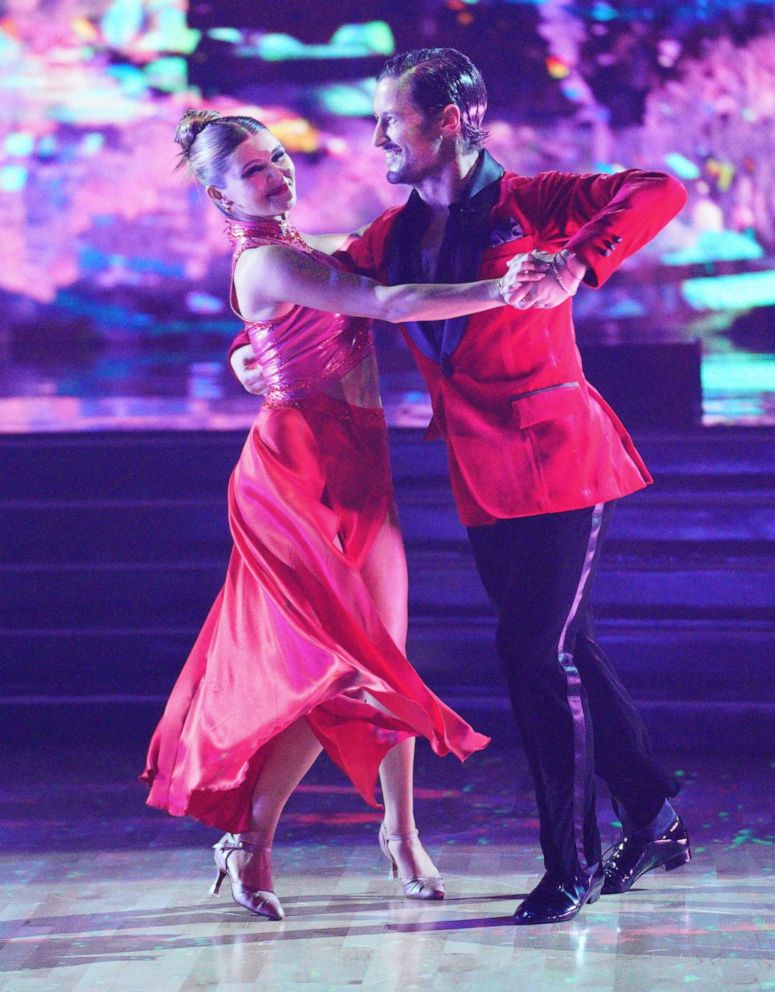 Christopher Willard/ABC
Olivia Jade and Val Chmerkovskiy perform during an episode of "Dancing with the Stars," Oct. 4, 2021.

The judges also took note of two competitors who pushed themselves on the ballroom floor, praising former "Bachelor" star Matt James and WWE star Mike "The Miz" Mizanin for coming out of their shells and paying attention to the finer details of their routines.

Another standout was country singer Jimmie Allen, who dedicated his salsa to Spears' "Outrageous" to his wife, Alexis Gale. Allen also joked that he "did not plan to cry on this show two weeks in a row" by talking about the powerful women who made a difference in his life.

"Dancing with the Stars" returns Monday night at 8 p.m. ET on ABC, where the cast and crew will celebrate all things Disney. Also, as an added twist, Mickey Mouse himself crashed the festivities to show the competitors the special "Mickey Moves" they must include in their routine, no matter what dance they are supposed to perform.