Felicity Huffman reported to a Northern California prison on Tuesday, and for the next 14 days, she'll be adhering to a highly regimented schedule.

The actress, who earlier this year pleaded guilty to charges stemming from the "Varsity Blues" college entrance scandal, will serve her time at the Federal Correctional Institution in Dublin, Calif., about 25 miles southeast of Oakland, according to a statement released to ABC News by her spokesman.

The FCI Dublin Admissions & Orientation Handbook indicates that during her time behind bars, she'll be expected to wake up at 5 a.m. and be in her housing unit by 9 p.m., while using her waking hours to participate in "a wide array of programs and activities."

"Release preparation begins on the first day of incarceration," the handbook reads.

Huffman, 56, admitted in May that she paid $15,000 for a college entrance exam proctor to correct her daughter's SAT answers, and also that she arranged for the teen to have more time to take her test. In addition to prison time, the former "Desperate Housewives" star was ordered to pay a fine of $20,000.

"Ms. Huffman is prepared to serve the term of imprisonment Judge Talwani ordered as one part of the punishment she imposed for Ms. Huffman’s actions," her representative said in a statement. "She will begin serving the remainder of the sentence Judge Talwani imposed -- one year of supervised release, with conditions including 250 hours of community service -- when she is released."

At FCI Dublin, Huffman is in the general population, and will have one to three roommates living in a room with a communal open toilet, a source told ABC News. According to the handbook, breakfast is served from 5:30 a.m. to 6:15 a.m., lunch from 10:45 a.m. to noon, and dinner after 4 p.m. Breakfast meals could include milk, fruit, hot or cold cereal or bread with jelly. Lunch items include chicken patty sandwiches, steamed rice, lettuce and tomato with salad dressing and dessert. A typical dinner menu offers Salisbury steak or black beans, mashed potatoes, corn and gravy.

Huffman will wear a uniform -- khaki pants and a coordinating blouse with a brown t-shirt underneath -- Monday through Friday. According to the handbook, blouses, which are to be tucked in, must be buttoned, minus the top button at all times. Although gray t-shirts, white t-shirts and shorts cannot be worn as part of the uniform, they're acceptable at other times, but green clothing is not allowed inside the FCI. 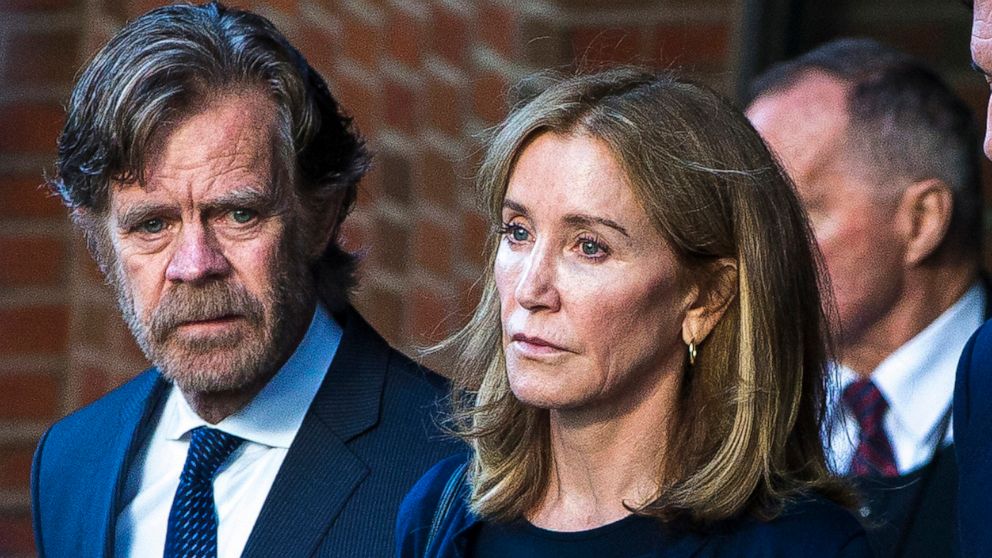 Nic Antaya for The Boston Globe via Getty Images, FILE
In this Sep. 13, 2019 file photo Felicity Huffman right, and her husband, William H. Macy, walk out of the John Joseph Moakley United States Courthouse in Boston.

Furthermore, "no inmates may be issued, permitted to purchase, have in their possession any blue, black, red, or camouflage clothing or cloth items," the handbook reads, noting that the only exception is for religious headgear. "All government clothing except undergarments will be tagged with a label indicating the inmate’s name and registration number. These items are to be neatly stored in the identified storage space provided."

Huffman must wear boots while in uniform, but she may also possess one pair of shower shoes, sneakers (valued at $100 or less), slippers and casual shoes. Her jewelry will be limited to one wedding band and one pair of studs or small hoop earrings.

Although the institution issues generic toothpaste, toothbrushes, combs, razors and soap, Huffman will be permitted to buy brand name items through the commissary. She may shop Monday, Tuesday or Wednesday during her lunch hour, 11:30 a.m. to 12:30 p.m., but she may only go once each week. Should she need over-the-counter medication, however, an exception will be made.

As reminders of home, Huffman will be able to keep a limited number of letters, books, photographs, magazines and newspapers in her storage space, but she will not be permitted to tack, staple or tape anything to any surface other than bulletin boards.

"Ordinarily, photographs, particularly those of family and friends, are approved, since they represent meaningful ties to the community," the handbook reads. "Inmates may not retain Polaroid photos."

During her recreation time, Huffman can listen to music or podcasts on an approved radio, MP3 player or watch, if she can demonstrate proof of ownership. She is also authorized one in-unit craft project at a time, which can include cross-stitch, drawing, card making, crotchet, origami, scrapbooking and watercolor. Outdoor recreation hours are 6:30 a.m. to 8:30 p.m.; the source told ABC News that she is permitted to walk the track for one hour each day.

"Basketball, volleyball, track, softball, and tennis facilities are provided. Shoes and shirts are required in the recreation area at all times. Indoor recreation exercise equipment will be provided along with board and table games," according to the handbook. "Special activities may include inter-unit holiday tournaments, bingo, and ping-pong."

However, the source added that FCI Dublin does not have amenities, and any exercise equipment is substandard.

Visits with her family are also possible. According to the handbook, they're welcome to come from 8 a.m. to 2 p.m. on Saturdays and Sundays.