Kirstie Ennis was honored at the 2019 ESPYS with the Pat Tillman Award, bringing down the house with her powerful acceptance speech and brutal honesty.

A former Marine, who was injured and could have died seven years ago in a helicopter crash while on duty in Afghanistan, Ennis had to work her way back from a traumatic brain injury, spine trauma and shoulder damage, not to mention the dozen or so surgeries she's endured, one to amputate her left leg above the knee.

A year after her injury and after trying to take her own life, Ennis made the decision to live for others in need. it was her purpose.

While on stage accepting her award, Ennis accepted the standing ovation, then tried to hold back the tears, standing in front of thousands Wednesday night.

"I am often told that I am strong, but truth to be told I'm not the strong one," she said. "It has taken me a village to get here."

Former Marine Corps Sergeant @KirstieEnnis was injured in a helicopter crash serving in Afghanistan in 2012.

Her achievements and dedication to serving others are why she's won the Pat Tillman Service Award.

She thanked her parents and sister for sticking by her side and those "who wrapped their arms around me when I needed them the most."

"I started my organization because I didn't have the role mode I needed while I was in the hospital," she said, adding that now she continues for those watching, needing that role model and "those who can't."

"Let this be my message tonight ... rest a moment less, endure a fraction more and try to make peace with whatever your pain may be," she said.

Before getting the award Wednesday night, Ennis spoke to "Good Morning America" about the ESPYS, overcoming hardship and finding her purpose in life.

"This award to me represents community and compassion for humanity, and what people can actually make happen when they come together," she said.

The 28-year-old adventure philanthropist said that she's thought long and hard about what she will say with millions watching Wednesday night, and the common thread would be "embracing failure or hardship."

"That can be the thing that compels us into the best years or moments of our lives," she said. "Turning something in my case that could be really freaking awful and making it something powerful."

Only 1 PM and it’s already been A DAY thanks to travel, but I made it to LA. ‪My nerves have finally kicked in for my speech at the #ESPYs. Such an honor to receive the Pat Tillman Award! Thank you to the Tillman Family, @pattillmanfnd, and to everyone who has supported me!‬ Be sure to tune in July 10th on ABC! #leftlegless

'My purpose is serving people'

Ennis admits that there were a lot of people who contributed to getting her back to the person she's always wanted to be.

It's this support that drives her now, and has crystallized her mission in life.

"I think it would be really selfish of me not to turn around and pay it forward," she said. 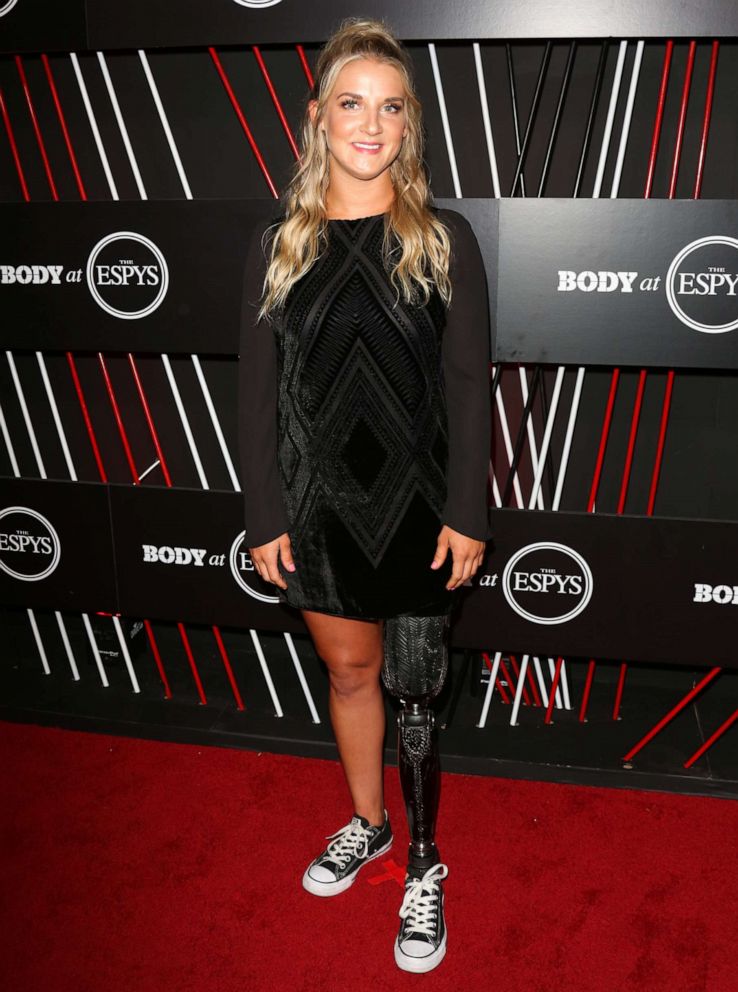 Enter the Kirstie Ennis Foundation, which she founded a few years back to improve the quality of life for individuals and families all around the globe by raising funds for several deserving non-profit organizations.

What she does and who she helps is a long list, but a recent trek to Mount Everest in May was part of her effort to become the first female above-the-knee amputee to summit all seven of the world's highest peaks. And all the while, she raises money for a non-profit in the U.S. and organizations wherever she is locally.

Just making sure we’ve got our systems dialed. The boys will be doing a little recce on the ice fall this morning so we can double check everything else! Getting antsy... Check out the link in my bio for more behind the scenes!

After conquering her first summit in 2017, Mount Kilimanjaro, and raising $150,000 for clean water for East Tanzania, Ennis has now finished four of the seven peaks. Her foundation has also earned close to $1 million dollars for the causes she champions.

"I didn't want to just do it to say look what I can do on my cool one leg. I wanted there to be heart and purpose and passion," she said. "I consider myself one of the lucky ones who made it home. I'm broken, I've got scars on me, but I made it home and I can still serve people."

"And that's how I want to live my life," she added.

'I don't want people to feel like they are alone.'

When Ennis woke up in the hospital after her injury in 2012, she admits she was the only female in the room.

"I was surrounded by a bunch of guys in the hospital and that was hard because I didn't have anybody I could sit down and talk to," she said. "I got hurt when I was 21 years old. I wasn't necessary wondering if I can run again. I'm wondering, 'Can I wear a dress again? Can I wear heels?'"

Less than a decade later, Ennis wants to be in that hospital room for another young woman trying to get a grasp on what's happening and what's next.

Walking in to the NHRA Toyota Nationals in Vegas like... 😂 Excited to be here supporting Force Family Racing! My money is on @courtneyforce! So appreciative for all they do for @buildinghomesforheroes! #leftlegless #vegas #nhra #funnycar @photobymeyer

"I want to be that person for the younger generations. I don't want people to feel like they are alone," she added.

Ennis wants to help women and men look at their scars, their injuries, no matter how severe, and help them move forward.

"Everything that I'm doing physically or adventure-wise is for the next generation," she continued.

While she wants to inspire, Ennis also wants to motivate others to take it one step further than even she did.

"I'm hoping someone is watching me and say, 'I can do it better than Kirstie.' And I hope they freaking try," she said, laughing.

When she's not climbing peaks, walking 1,000 miles for charity or planning to swim the English Channel, Ennis says she spends an hour a day writing letters or signing autographs for fans and young amputee children.

After being featured in the ESPN's 2017 The Body Issue, she said the most rewarding aspect of the honor was parents reaching out saying '"'Thank you for being that person for my kid.'"

"That just solidifies everything that I'm doing," Ennis said. "I didn't think that's what I'd be doing 10, 11 years ago when I joined the Marine Corps, but it's been pretty wild to watch all of it evolve."