With about 62% of U.S. theaters back open this Labor Day weekend, you’re probably wondering -- should I take a risk and see "Tenet," the thundering new epic from director Christopher Nolan that is built to be seen on the most jumbo screen possible, preferably IMAX. Whether you show up mask in hand, sanitizer at the ready and in strict compliance with COVID-19 rules of safe distancing is a personal decision. All I can tell you is that "Tenet" delivers the goods as a mind-blowing spectacle. Every cent of its $200 million production budget shows up on screen. Eyes will pop, jaws will drop, pulses will pound -- all that good stuff.

John David Washington, son of Denzel and a star in his own right -- check him out in "BlackKklansman" and "Ballers" -- takes on the role of an unnamed spymaster. Is he CIA? Or his own man? “I am the protagonist,” he announces, unhelpfully. Dressed to wow in suits that would leave James Bond sick with envy, his mission impossible is to save the world from annihilation. For help, he has Robert Pattinson, another fashion icon, playing an adrenaline junkie with a wicked sense of humor about putting his life on the line like every two minutes. Both guys are connected to Tenet, a secret society built to bring down a Russian madman, played by Kenneth Branagh, who foams at the mouth every time his elegant English wife (Elizabeth Debicki) looks at another man. She looks hard at Washington. Maybe he can save her and her young son from crazypants Branagh.

And we’re off, with one catch. Nolan's twisted plot involves the speculative theory of inversion in which objects and people can move forward and backwards in time. If you fell asleep in physics class, you’re in for some head scratching. Long story short: in the wrong hands, namely Branagh’s Russian, you mess with inversion and the world goes boom! 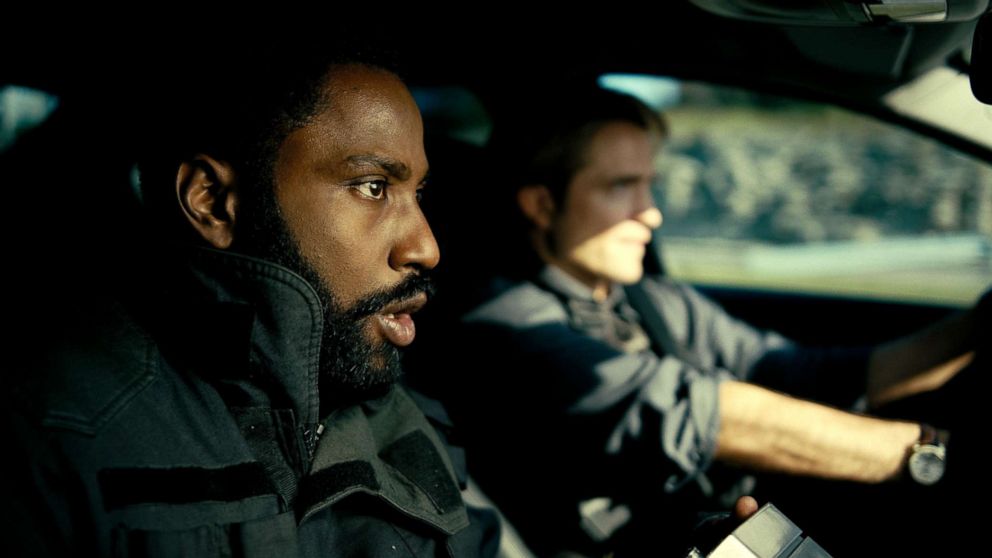 Courtesy of Warner Bros. Pictures
John David Washington and Robert Pattinson appear in a scene from the action movie "TENET.

Still confused? Forget about it. Just keep your eyes on the action as Nolan keeps tossing out visual marvels like they’ll never run out. And without green screens and cheesy digital effects. Watch Washington take on an army with his fists. Watch Washington and Pattinson bungee up the side of a Mumbai high-rise. Watch catamarans race to the death off the gorgeous Amalfi coast. Watch cars on a freeway play dodgems, rewinding and resetting with dizzying speed.

"Tenet" is a palindrome, a word that reads the same forward and backward. So is "huh," which may be your reaction. Nolan likes messing with our heads -- remember "Memento" "Inception," "Dunkirk" and the "Dark Knight" trilogy? But his rooting interest in humanity comes through in ways that make us feel our world is worth saving. Can "Tenet" also save the movie business by getting us off our lock-down couches and back to the multiplex? Don’t bet against Nolan. With "Tenet" having already grossed over $53 million overseas, he may just be the man to do it.