Gabrielle Union and Dwyane Wade are redefining the meaning of "shade" with their new picture book, "Shady Baby."

During an appearance on "Good Morning America" on Tuesday, the couple spoke about how they view the term in their family and how their 2-year-old daughter Kaavia James, who is famous on Instagram for her larger-than-life personality, inspired the conversation.

Union said Kaavia has "always been extremely expressive and very clear about who she is and what her boundaries are." Their family has always viewed these qualities as strengths.

"Her shade -- and what we look at as her superpower -- comes from her mom," Wade added.

"She really looks at everything her mom does, and I think she tries to go out and do those same things," the retired NBA star continued. "The DNA between both of us have created this person that everyone has got a chance to kind of follow throughout her life, so I give a lot of credit to her mom for her shade and her superpower,"

Through their new book, Union said, they're hoping to encourage people to reexamine how they view shade.

"I think we were all introduced to the term 'shade' or 'throwing shade' from Black and brown queer communities, from ballroom scene, but I think a lot of people have negative connotations about shade," Union shared.

.@DwyaneWade and @itsgabrielleu are redefining "shade" with their new book #ShadyBaby inspired by their 2-year-old daughter Kaavia! pic.twitter.com/TR4LO7Ahzt

She then explained why they view shade as a superpower: "Shade is a reaction to something, and for our daughter, shade is a reaction to not-so-great behavior -- perhaps people aren't respecting her boundaries, people are trying to squash her voice, someone is standing in front the television while she tries to watch 'Moana,' and she's going to have a reaction, but I think a lot of times we often try to squash how our kids react to a negative situation."

She said that by handling the child's reaction in that manner, she believes parents then "negate" their child's negative experience.

"So by kind of shifting the shade -- what it is is really empowering kids to use your voice," the actress continued. "Have a big reaction to something that's not good, that way no one is ever going to mistake that bad behavior for anything else, and that bad behavior will be addressed."

Along with attempting to shift these parental conversations, the couple also works to show their support for the LGBTQ community and speak out against anti-transgender legislation. Their 13-year-old daughter Zaya came out as transgender last year.

He said he and Union have worked with the Human Rights Campaign to use their platforms to spread awareness and education on how anti-trans legislation impacts the community. 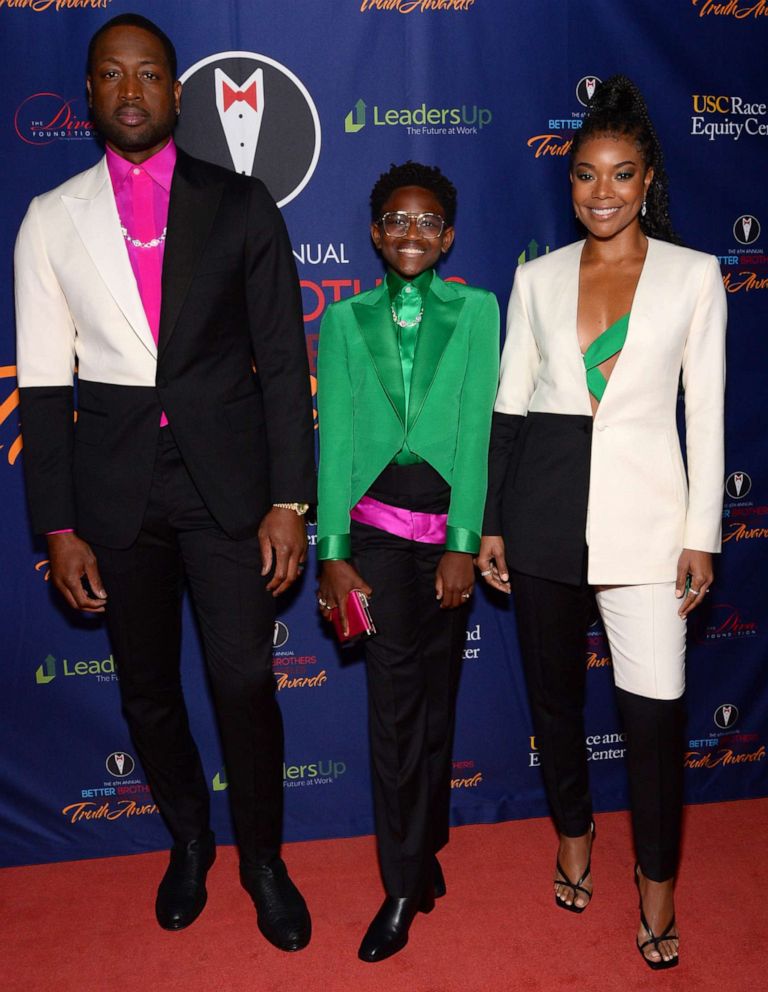 According to data from the HRC, 2021 has surpassed 2015 as the worst year for anti-LGBTQ legislation in recent history.

"Our kids are kids, and our daughter -- and the community that we all are a part of -- we watch her every day, we watch her develop as a young person in this world, and we don't try to squash that," Wade said.

"I think the world is trying to squash this community because of their disapproval or for whatever reason, and for us in our household, like I said, we try to continue to lead with love," he continued. "We understand that we have the opportunity and the ability to be able to look at our kids holistically in this house and not put anything on them or not make them something that they're not, because we have the opportunity to do that."

He said he wants members of the community to know that their work as allies will continue.